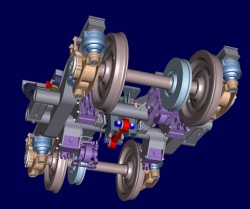 Producers of the project systems

The table provided in this material represents the ordered list of producers of ready-made software solutions in the field of the systems of design, development and industrial design.

Along with use of automation systems of engineering calculations and the analysis of CAE automated design engineering systems of CAD (Computer-Aided Design) are, as a rule, used at present. Data from CAD systems come to CAM (Computer-aided manufacturing). It is necessary to notice that the English term "CAD" in relation to the industrial systems has narrower interpretation, than the Russian term "CAD" as in the concept "CAD", both CAD, and CAM, and CAE enters. Among all information technologies design automation holds a specific place. First of all, design automation  is a discipline synthetic as different modern information technologies are its part. So, for example, the CAD equipment is based on operation of computer networks and telecommunication technologies, also the CAD practices use of personal computers and workstations. Speaking about software of a CAD, it should be noted a variety of the used methods: calculus mathematics, mathematical programming, statistics, discrete mathematics, artificial intelligence. Software packages CAD can be compared to some of the most complex modern program systems which cornerstone such operating systems as Windows, Unix, and such programming languages as With, With ++ and Java and also modern CASE technologies are. Practically each development engineer should have knowledge of bases of design automation and be able to work with means of a CAD. As all project divisions, offices and design offices are equipped with computers, work of the designer as such tool as the normal drawing table or calculations using a slide rule became irrelevant. Therefore, the enterprises working without CAD or using it in small degree become noncompetitive as spend for design much more time and financial resources.

Structure of a CAD

The structure of software of a CAD is defined by the following factors:

Classification of a CAD

The CAD is classified by the following principles: to purpose, according to the application, scales and the nature of a basic subsystem. On purpose select a CAD or subsystems of a CAD which provide different aspects of design. Thus, CAECAD//CAM systems appear as a part of MCAD:

According to applications and widely used such CAD groups as are considered as the most important:

In addition, there is a large number of more specialized CAD or selected in certain groups, or which are an independent branch in classification. These are such systems as: BIS-SAPR (large scale integrated circuits); CAD of aircraft and CAD of electrical machines. Determine the independent program and methodical complexes (PMC) of a CAD by scale:

Classification by the nature of a basic subsystem

Development of a CAD

One of key subjects of development of a CAD there are "cloud" calculations: remote work with the data placed on remote servers from the different devices having Internet connection. Today clouds very significantly promoted in a segment of easy applications and services — mainly in a consumer sector. Two options of integration are possible. In the first case all infrastructure of engineering services, and respectively need for the engineering software set in a workplace is transferred to a cloud, disappears at all. In the second case the designer still has graphic workstation from the set CAD, but at the same time he gets from it access to different cloud services thanks to which it is possible to solve the problems requiring very essential resources (for example, to carry out strength the analysis). It is possible to perform cloud interaction by two methods: publicly, when access to the server located at provider is open on the Internet, and in a private order when the server is at the enterprise and the addresses to him happen on the closed local network. In Russia development of clouds in the field of a CAD restrains need to observe excessive privacy in very many projects. Therefore most likely private clouds will become the main driver of the market in the nearest future. Clouds are not only new technologies, but also an opportunity to experiment with new business models.[1]

The following important trend — alternative OS. About five years ago, when conversations on Microsoft Windows alternative were started, the speech, as a rule, went about Linux. This subject is relevant and today: the domestic national software platform, most likely, will be made based on Linux kernel; to this OS interest grows in the field of education and in state structures (there are examples of successful transition). However now it is possible to speak about the essential potential of the Google Chrome OS operating system. And here the mentioned trend is closed with a cloud trend — Google OS, as we know, does not mean installation of applications on the local computer.

An important role in promotion of this OS is played by a tendency to reduction of a market share of the PC. It is obvious that if to transfer the majority of bulky and difficult calculations to clouds, requirements to the hardware decrease and there is an opportunity to work on any devices. For example, on tablets. As a result solutions CAD developers should or develop platformonezavisimy solutions (cloud option), or to do them multiplatform.

The following subject — 'iron'. Here everything besides is defined by dissatisfaction of the market with the solution of the monopolist — classical architecture of Intel (rates of its development). In this regard the trend on development of architecture of ARM is obviously noted. She is supported now by several producers among whom one of the most active is the Nvidia company. So far this architecture is actively applied only in mobile devices, but in the nearest future, apparently, it will pass also to stationary PCs. Indirectly the fact that future Microsoft Windows 8 OS will be able to work also at ARM architecture too testifies to it (for the first time not only on Intel).

The second trend — transfer of an essential part of calculations from the central processor on a graphic core. This subject belongs rather to area of parallel computings.

One more trend is the growth of the market of mobile devices. He received the greatest acceleration last year with the advent of iPad. In the beginning, however, it seemed that this device especially consumer and in the corporate sector it will not be applicable. However it became clear that it quite is suitable for the solution of many tasks.

In the sector of a CAD today many employees are mobile — work at departure, at remote construction objects, move over the country, houses work. (All this requires the convenient mobile device.)

Anyway abroad that each employee of engineering service will have a tablet soon speak as about the come true fact today. Already there were mobile platforms of IOS Apple and Android Google and also essential quantity of a CAD-applications, attractive to developers, under them.

Now it is very difficult to tell whether will leave in ten years our arsenal the keyboard and a mouse. But the fact is that the interfaces focused on work about the multi-touch screens (paltseoriyentirovanny) obviously gain popularity. In mobile devices they already practically became the standard. Today it is quite clear that this interface more than is suitable for consumption of information. Whether also it is good for its creation, for work with a CAD, to tell still difficult. For mass transition to similar interfaces there is still not enough technology base. Now in the market just there is no enough big the multi-touch panels with the permission, necessary for a CAD.

The market of a CAD is very conservative. Even replacement of one such system by another within work on one project — a task quite difficult. What to tell about serious paradigm shift, interfaces, generations of a CAD. Therefore this market is obviously not among leaders of a technology race — development is, but obviously not such fast as it would be desirable. However, in the next decade the engineers who grew up already during an era of the Internet, new technologies and mobile devices will come to the enterprises and anyway they will begin to introduce actively on the market elements of the culture.

Digitalization of business affected all its industries. In the last decade the boom is endured by solutions for design, engineering and designing of industrial facilities. From the Soviet drawing tables designers came to 3D - modeling. What digitalization means for this segment how to help a team to work in uniform space and why it is not possible to get rid finally of paper carriers yet, the CEO of AVEVA company Alexey Lebedev helped to understand.