The Russian market of cell phones is for suppliers one of the most attractive in the world.

At the end of November, 2019 it became known of testing in Russia of the system of identification by number IMEI. She will allow to fight against gray import and against fraud.

It is supposed that in network of operators it will be possible to register only phones with the permitted numbers IMEI from the central database. If phone has no such number or if it matches number which is already appropriated to other device, then such phone cannot be registered in network, and on it it will be impossible to call.

According to TASS with reference to Rossvyaz, by the end of November, 2019 Beeline, MegaFon and Tele2 together with department began to prepare for introduction of identification of smartphones by numbers of subscriber IMEI devices. Operators confirmed preparation.

Will test identification on IMEI the Central Scientific Research Institute of Communications (CSRIC) which manages the central IMEI database. It is supposed to test it is differentiated for each of telecom operators, told in Rossvyaz.

In Tele2 reported, the company jointly of TsNIIS experienced interaction of the EIR solution (the register of the operator with numbers IMEI) and the central database regarding exchange of lists of devices, results of tests are considered successful. It is about testing of technology which automatically eliminates IMEI which are in "black lists" (number to which access to network is prohibited), and registers that are in "white lists". At the same time the register of rooms in network of the operator is synchronized each two hours with the central base IMEI that maintains relevance of data.

MegaFon told TASS that by the end of November, 2019 the concept of system operation is discussed, in particular "options of exchange of IMEI bases between operators are tested".[1]

The Russian Federation can introduce penalties for counterfeit of IMEI

The expert advice at the government suggested to make the changes in the Code of Administrative Offences (Administrative Code) providing introduction of punishment for counterfeit of IMEI (International Mobile Equipment Identity) — an international mobile equipment identity. Amendments were approved by the time commission of the Federation Council on development of information society, writes the Vedomosti edition in December.

For counterfeit of IMEI authors of an initiative suggest to set penalties in the amount of 3–4 thousand rubles for individuals, 15–30 thousand rubles for official and 60–100 thousand rubles — for legal. As the curator of the working group "Communication and IT" of expert advice Irina Levova explained, introduction of responsibility is intended to provide balance of interests of citizens and business.

Verify authenticity of IMEI of the purchased smartphone and register it it will be possible on the special website. The IMEI base is going to be created by 2023. The importer or the producer will have to register phone. Citizens need to register the device only if it is purchased abroad. Payment of registration will cost to 100 rub.

Rossvyaz prepared the project on regulation of turnover of mobile phones assuming creation in the Russian Federation of the unified register of the identifiers IMEI. The database can include white and black lists of IMEI, the customer address and/or identifiers of SIM cards, Kommersant reports in September, 2017. Using this information it will be possible to identify devices more precisely that will allow to avoid blocking of phones with identical IMEI (in case of need such blocking).

Main goal of the project is prohibition on use in the Russian Federation of the stolen, counterfeit and illegally imported on the territory of the country mobile devices. Similar registers already work in India, the USA and Great Britain.

Infrastructure of the Central Scientific Research Institute of Communications (CSRIC) which keeps account of numbers transferred subscribers when changing the operator now can become base for creation of the register of IMEI. According to the head of TsNIIS Andrey Gryazev, the institute studies two years the draft of the unified register of IMEI. Customers of the similar database can become the Federal Customs Service, the Ministry of Telecom and Mass Communications, Minpromtorg and even security officers. Financing of the project can be performed by subsidies from the state budget.

Initiative of control of identifiers of mobile devices (IMEI)

The commission at the Federation Council discussed in the summer of 2017 an initiative of control of identifiers of mobile devices (IMEI). Representatives Ministry of Telecom and Mass Communications Roskomnadzor FCS MINISTRY OF INTERNAL AFFAIRS FSB State Offices of Public Prosecutor MTS VimpelCom MegaFon Tele2 Apple Samsung, M.Video and industry associations participated in a meeting RATEK and AKIT.

Politicians suggested to forbid sale of telephone sets without IMEI in the territory of the Russian Federation and to prepare corresponding changes in the customs legislation of the Eurasian Economic Union (EEU). After acceptance of innovations it will be possible to study questions of responsibility for "refirmware" of smartphones, creations of the register of IMEI and use of data of the register by telecom operators. Most of participants of a meeting supported the initiatives of the Federation Council though they in MTS suggested to solve a problem of "zadvoyeniye" of IMEI at first.

According to the recommendations of GSM Association, assignment of IMEI happens voluntarily, but at different producers of devices the code can match therefore there is a duplication of IMEI. According to AKIT, 5–10% of phones support the duplicated IMEI. For the solution of this problem it is necessary to introduce control by telecom operators of the IMEI codes through determination of the identifier of phone of the subscriber with the subsequent reconciliation with the database of information about him and the identification modules used by it.

In case of legalization of parallel import of AKIT does not exclude a situation when in the Russian Federation the phones intended for other state and having, thus, the zadvoyenny IMEI code in the different countries are delivered. Therefore the association considers important an exception of cell phones of the program of parallel import.

In 2011 deputies of the State Duma suggested to block operation of the stolen mobile phones on IMEI. And in 2010 the Ministry of Internal Affairs suggested to oblige to register telecom operators IMEI. According to the president of AKIT Alexey Fedorov, regulation can protect citizens from terrorism and from thefts of mobile phones[2].

According to analysts of IDC, in the second quarter 2016 more phones, than were imported the previous year into Russia. Experts did not give exact numbers.

Specialists note that in kind the Russian market of "mobile phones" approached the level which was reached before devaluation of ruble in 2015.

In terms of dollar revenue the market was not recovered because of low retail prices yet. In April-June, 2016 deliveries of mobile phones to Russia in money reached $1.1 billion whereas for the same period the indicator in $1.4 billion took place.

According to forecasts of IDC, market size in dollar expression will not return on the previous level. In the medium term the Russian market will remain highly competitive and price-sensitive.

According to analysts of TrendForce, in 2015 sales of normal mobile phones (without smartphones) in Russia made 17.07 million pieces against 20.97 and 23.29 million in 2014 and 2013 respectively. Extent of penetration of mobile phones in the Russian market reached 170% in 2015, experts counted. 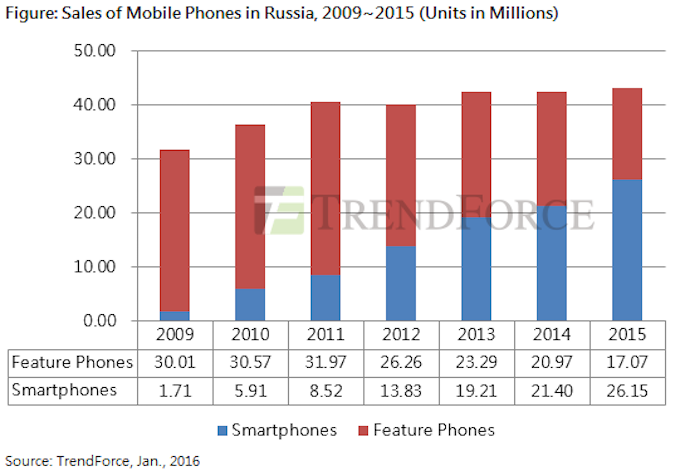 In 2011 in Russia 40.5 million mobile phones, including smartphones were sold that was 16% more in comparison with 2010. In terms of money market size grew by 12% up to 174.8 billion rubles, the largest Russian operator of MTS wrote in the report.

In 2011 the Russian market of mobile phones for the first time reached the level of pre-crisis 2008 in quantitative expression, however in terms of money the level of 2008 did not manage to be reached. Analysts explained lower growth rates of revenue with gain of the competition and reduction in cost of production of mobile phones.

In November, 2011 in the Russian mobile market there was an important event - on sales volumes of mobile phones of all types to end consumers the Korean Samsung whereas earlier this position belonged to the Finnish Nokia Corporation[3] for the first time has come out on top[3].

Retail sales of cell phones in primary market in 2010 will grow in quantitative expression to 30 million pieces (data of the ex-marketing vice president of Euroset company Vladimir Bogdanov). At the same time the retail cost of the device in rubles will increase slightly, and total revenue in the market will make about 150 billion rubles. But if operators start the program of the subsidized phones from the middle of the 2nd quarter 2010, then sales of mobile phones can reach 31-32 million pieces at total revenue more than 160 billion rubles.

Bogdanov also expects that the share of Euroset in 2010 will change little, but at sales of the subsidized Beeline phones (if they appear) a share of the company (by quantity) in primary market of retail sales can increase to 33-34%. The share of retail sales of Svyaznoy, in turn, will increase due to expansion of network to 25% a little in December, 2010. In case of emergence in the market of the subsidized phones, the company will have to agree with operators about their sale: the easiest it will be to make with MegaFon and Tele2, the ex-vice president of Euroset believes. Otherwise the share of the company in the market of sales of cell phones can be at the level of a share of the end of 2009 even at increase in number of salons. As for RTK, at a sales term of the subsidized phones its share by the end of 2010 in primary market can approach 18-20%.

According to the report distributed by the ex-marketing vice president of Euroset company Vladimir Bogdanov in 2009 in Russia in primary retail market 27.5 million cell phones were sold that is 24% lower than a similar indicator for 2008 and for 9% - for 2004. In total about 223 million mobile phones were sold for lifetime of cellular communication in the territory of Russia for the end of 2009.

In total in Russia 2.5 million cell phones were sold on credit that is 2.3 times less than a similar indicator of 2008.

As for market shares of different vendors of mobile phones, the trend of sharp increase in a share of the LG phones was outlined in 2009, according to the report of the ex-marketing vice president of Euroset company Vladimir Bogdanov, growth of a share of Samsung and considerable reduction – SonyEricsson continued. A little the share of the Nokia Corporation phones decreased, and the share of top four reached nearly 90% of the market.

Retail revenue from sales of cell phones on credit made $0.8 billion that is 2.2 times less than similar revenue in 2008, or 25.2 billion rubles - are 1.7 times lower than a ruble indicator of 2008 (data of the ex-marketing vice president of Euroset company Vladimir Bogdanov).

Shares of the retail companies at the end of 2009:

The volume of retail sales of cell phones in Russia in 2008 grew by 9.8% in comparison with 2007 to $7.48 billion, Prime-Tass with reference to the independent analyst Vladimir Bogdanov who is the marketing vice president of Euroset company during the period from 2002 to 2007 reports.