Article is devoted to new generation of the computing which received the name "cognitive".

Reason instead of programming. There comes the era of the computers capable to thinking

The mankind endures approach of an era of cognitive, i.e. reasonable computing or computing with capability to thinking. How there was a term Cognitive Computing and what is behind it? What and when to wait from reasonable machines? Answers to these questions are given by the material of the journalist Leonid Chernyak prepared especially for TAdviser.

History and premises of emergence of cognitive computing

It is difficult to do without the word "computing" though it with noticeable work makes the way in Russian, repeating the difficult fate of the word "computer" which first appeared in combination with "personal". Then not one year on that "computer" forced out a computer abbreviation was required. As for the word computing, it is a synonym of counting or calculating translated as "calculations". But under pressure of circumstances this word purchased other sense, having incorporated various operations on use of computers, the electronic processes happening in them (hardware), management of them (software) and conceptual bases (computer science, computer sciences). So computing became a part of baggage of a civilization.

Usually select three eras of computing, and its history is synchronous with the history of industrial revolutions.

The first revolution – differential and analytical Babbage's machines, other mechanical devices and, of course, Odner's arithmometer. Its Soviet option known under the name "Felix" was issued prior to the beginning of the seventieth years of the 20th century. 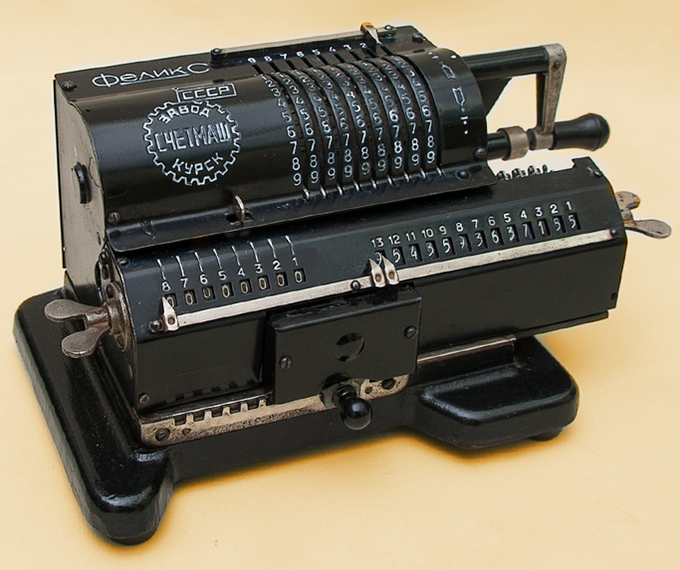 The second – Herman Hollerith's tabulators which provided power of IBM created by it. The company was so tied to them that not at once recognized computers. Tabulators were issued in a number of the countries. Massive and very noisy they turned out so demanded that even in the seventies in universities there was a specialty "Mechanization of Computing Works". 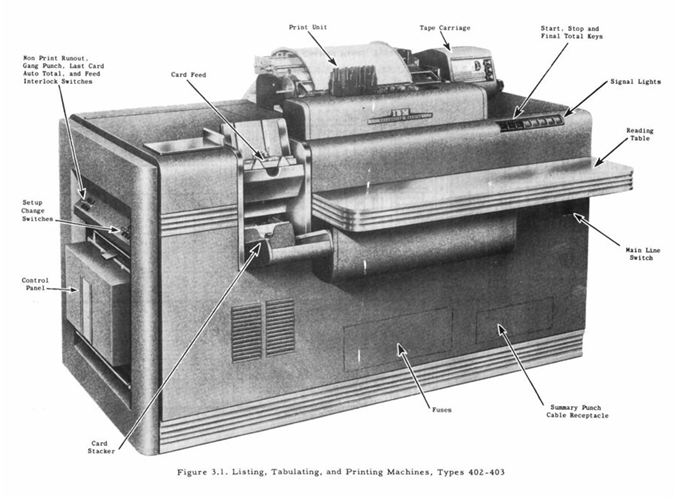 The third – a current monopoly position of programmable computers. All of them without exception are constructed on John von Neumann's model. The words "programmer" and "program" became time character, however in fact, the program is that other as record of in advance planned sequence of actions.

The software solution perfectly is suitable for the closed systems (the most ancient example – a tappet shaft of the internal combustion engine). But the program as the fixed sequence of actions, does not assume interaction with the outside world, capable to break the order set beforehand. So generally multipurpose computers, from personal to mainframes also work.

For work with peripheral devices, beginning from the interface devices and to means of communication with difficult objects, there is no different way of reaction as the interrupt handling mechanism. What difficult it would not be, the essence comes down to transfer of management to other in advance prepared fragment of the program and only.

Until scope of computers was limited to calculations, technology management systems, database management systems and other classical applications in the current sense, programming Neumann's background did not cause complaints. Huge engineering forces were directed to overcoming "a bottle throat" - other its weakness. Here what was told about it by the head of a team of creators of the first high-level programming language Fortran John Backus at a delivery ceremony to it the Tyyuringovsky award in 1977:


And now, when in a certain measure an udalost using multilevel caches and other tricks it is temporary to engineers to overcome this weakness due to terrible recomplication of architecture of processors, to the forefront there is a limitation of opportunities of programming.

Cognitive computer systems or Cognitive Computing can become an alternative of programming. Analysts already speak about approach of an era of cognitive, i.e. reasonable computing or computing with capability to thinking.

Role of IBM in cognitive computing

The first in cognitive way Watson which defeated on February 14, 2011 the strongest players the television game Jeopardy went! ("Risk!"), better known in Russia as "The game". From this day counting of an era of cognitive computing is conducted.

Actually Watson in complete sense reasonable is not. In it traditional programmable Power processors are used, and has specific intelligence working at it a question - the response system constructed on "architecture of management of unstructured information" of UIMA. Having created Watson IBM transferred reasonings on cognitive computing to a practical bed.

Watson had also less successful predecessors, in any case at the level of ideology. Among them there are a system Wolfram|Alpha and library of knowledge Cyc. The term Cognitive Computing is not new too. It was used by specialists in the area known as "cognitive information science" (Cognitive Informatics).

It is necessary to be the big optimist to allow fast emergence of practical cognitive computers. However, time hurries — at the increasing amounts of data it will not turn out to create the adequate analytical systems synchronously any more soon. Therefore IBM proposes the palliative solution — cognitive approach with preserving of the existing technology basis (it is about the integrated expert systems of the PureSystems family). At the macrolevel it is possible to recognize such solutions cognitive, but at the microlevel, at the processor level they are quite traditional.

For example, authors of PureSystems do not do attempts to model a brain: their main task in overcoming one of weaknesses of modern computers — works with small fragments of data (bits and bytes). Here what is written by John Kelly and Stephen Hamm from IBM in the book "Smart Computer":


Most likely, PureSystems and it should call similar systems, the managed data streams (data driven systems).

Computers of a new era differ from existing nowadays on several main signs. The center of attention in present computers are processes and processors, and in future — data. Respectively, the fixed, in advance programmed calculations will give way to analytical approaches.

If today manual control by systems, then in the future — automatic dominates. One of the major differences consists in the relation to scaling. We got used to two types of scaling — up (Scale Up) and in breadth (Scale Out), and now there is a scaling inside (Scale In) which essence in integration into one system (as was in meynfeyma) all principal components, including processors, memory, storage systems and switching.

Carry everything that is anyway connected with modeling of brain processes to cognitive computing. These are systems with training, mining of data, image identification (a photo, video, the speech), processing of texts in natural languages (Natural Language Processing, NLP) and many other things. Cognitive computing is aimed at creation of such systems which can solve assigned tasks without participation of the person.

From the applications of cognitive computing seen now it is possible to call speech recognition, the sentiment-analysis, facial recognition. Unlike computers of thirds of an era where programming dominates, interaction with cognitive computers will be performed by means of training. Algorithms of machine learning can take information from data, process it and by that to promote obtaining new knowledge.

The first cognitive computers "in iron"

As of 2017 it is known of four significant projects aimed at creation of neyromorfny computers. From them two — in Europe: BrainScaleS (Institute of physics of Heidelberg University) and SpiNNaker (The Manchester university) and two — in the USA: researches in the field of cognitive computing of IBM and NeuroGrid (Stanford University).

Projects are at different stages, but it is important to notice that all four are anyway embodied "in iron". They serve as stands for modeling of a brain and for development of the corresponding software. However, the term "software" in relation to them has conditional character. In neyromorfny computers of the scheme of Turing and Neumann's background on which all universal processors (CPU) are under construction or are not implemented at all, or are implemented partially therefore neyromorfny computers are not programmable in complete sense. More likely, they are capable to training, and in this sense they are similar to a brain.

Two European projects make the maintenance of the ninth of thirteen points of larger project Human Brain Project financed by the European Union. It is called SP9. The Heidelberg computer hereinafter is referred to as NM-PM-1, and Manchester — NM-MC-1 (PM is decrypted as physical model, and MC — as multinuclear, both have the general interface). Both that, and another support PyNN - the platform and independent language serving for creation of neural networks (PyNN, is said as "пайн" — an abbreviation from Python package for simulator-independent specification of Neuronal Network models; the project, as it appears from the name, integrates Python with neural networks).

Purpose SP9 is creation of the computer Neuromorphic Computing Platform platform which will allow scientists to make experiments with the system modeling a brain (Brain Simulation Platform).

Listed above – only the beginning. With approach of a maturity of computers of a cognitive era they will turn in trainees and self-trainees of a system. Computers will be able to understand data, to analyze them, to adapt and propose the solutions based on data. At the same time, they will not replace the person, and will expand his opportunities, having undertaken routine work on processing of data and having left an opportunity to draw conclusions and to make decisions for the person.

In September, 2017 Intel provided the neyromorfny Loihi processor using which, according to in the company, artificial intelligence technologies (AI) [1] more available will become (more detailed).

2017: IBM: The industries will be ready to implementation of cognitive solutions by 2020

According to the results of a research of IBM provided in September, 2017, about two thirds (64%) of the polled heads of departments of marketing and sales consider that the industries in which they work will be ready to implementation of cognitive technologies in the next three years. Despite it, only 24% of respondents have strategy for implementation of these solutions.

In general marketing and sales directors recognize that "customer satisfaction" will become a key factor at making decision on implementation of cognitive technologies. At the same time, many respondents said that they are not sure of readiness of their organizations for successful transition to the cognitive systems.

According to the polled marketing directors, two main advantages of cognitive technologies consist in improvement of client experience and financial results, including increase in profitability of the enterprises and a possibility of more effective assessment of profitability of marketing campaigns. Sales directors using cognitive technologies aim to receive comprehensive understanding of the customers. Thanks to it they will be able to improve forecasting of customer needs and search of potential buyers and also to play a large role in strategy implementation of the enterprise and quality improvement of service.

The research which the IBM Institute for Business Value (IBV) institute conducted together with Oxford Economics is based on global poll of 525 marketing directors and 389 sales directors from the most different industries. Its main goal — to define degree of readiness of marketing experts and to sales to implementation of cognitive technologies.

Recommendations about transition to cognitive calculations