The direction in development of industrial robotics - "joint robots" who are intended for interaction with people and sharing of a working space.

2019: The global market value of collaborative robotics will grow to 12.3 billion dollars in 2025.

Global market of collaborative robots will intensively grow in the next years. In the research conducted by analytical company MarketsAndMarkets it is said about market development of collaborative robots that by 2025 investments into this sphere will be increased in several tens of times – from $373 million to $12.3 billion. The market share grows because of requirement of the enterprises for automation of the processes and also in a consequence of the growing deficit of labor power in labor market.

The collaborative robot (kobot) is more universal and flexible solution of robotization, than the traditional industrial robot. The new category of robotics was for the first time provided in 2008 by Esben Ostergaard, the cofounder of Universal Robots. Ostergaard wanted to make robotics available to all companies, irrespective of their size. Therefore he developed little, convenient, flexible and economic robots with whom the person can work safely in close proximity. Now more and more companies use robots for automation of the production processes worldwide. The international federation of robotics (IFR) considers kobot as one of the major technology trends which will create the market in the future.

For small and medium business acquisition of traditional industrial robots is too big investment, collaborative robots, on the contrary, are an available alternative. At the same time, these robots are very friendly and simple in installation and integration into the existing production processes. As also decisive factor when choosing collaborative robots their absolute security acts. The special structure of kobot allows them to work with the colleagues people in close proximity.


According to the research MarketsandMarkets the share of sales of collaborative robots will grow every year. According to the analyzed data, market size will grow from $710 million in 2018 to $12.3 billion by 2025. Every year the segment of collaborative robots increases on average by 50.31%. Analysts connect this amazing growth mainly with indisputable advantages of kobot, turning on, among other things, their low cost and fast payback that is especially relevant for small and medium business. High interest in collaborative robotics is caused by also growing extent of automation in all industries that is directly connected with the Industry 4.0.

2018: The growing popularity in the companies

According to Barclays Research, the number of the installed collaborative robots doubles every year: at the end of 2020 the total number of the sold kobot will reach 150 thousand units, and the total cost of this market will exceed $3.1 billion.

By April, 2018 more and more companies use worldwide kobot which are intended for interaction with people and sharing of a working space. In several years the volume of this segment of robotics will be measured by billions of dollars.

According to the JapanToday portal, in Japan, known for the use of large industrial robots at the enterprises, such miniature machines were considered until recently as unprofitable because they can lift small weight and have limited potential. However now the Japanese companies Fanuc and Yaskawa Electric - some of the largest producers of robots in the world are engaged in their creation. 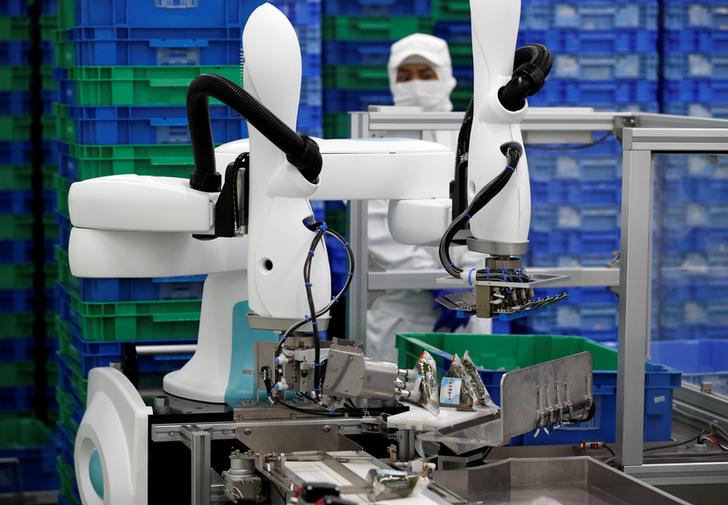 By 2018 kobota only begin to be implemented in the companies and make a small part of the market of robots, but, according to forecasts of experts, the segment of kobot within the next decade will grow to $10 billion.

Concept of the colleague robot rather new. The Danish company Universal Robots provided kobot for industrial application at the end of 2008, closely cooperating with the largest German car makers, such as Volkswagen.


With assistance of the Berlin strategy of Industries 4.0 directed to promotion of smart productions, Kuka and Bosch brought kobot to the market at the beginning of the 2010th years.

Rather inexpensive and easy-to-work, kobota are used now by the companies for small-lot production and accomplishment of simple processes. It, in particular, helps to lower staff costs.

Mitsubishi Electric is going to bring kobot to the market at the beginning of 2019. It will be intended for such users as producers of electronics and the logistic companies, the senior manager who is responsible for sales of robots of the company told Katsutoshi Urabe.

Kawasaki Heavy, one more engineering giant which entered the market in 2015 jointly from the Swiss ABB in the 2018th are going to standardize programming of kobot. It is expected that participation of such large companies will lead to growth of the market of kobot.[1]