Cooperation of the USA and India

In March, 2006 the U.S. President George Bush Jr. and the prime minister of India Manmohan Singh signed the bilateral agreement in nuclear cooperation between the countries. It was supposed that within this cooperation India will be able to leave the international isolation in the field of nuclear power engineering and to begin purchase of nuclear fuel and technologies.

Washington promoted that the Nuclear Suppliers Group withdrew the ban on supply of nuclear materials to India operating 30 years. However the law on responsibility for nuclear damage entered in the country did not allow the American atomic giants to increase quickly profit in India.

2013: Immigration reform of the USA will affect India

In the middle of 2013 the Senate of the U. S. Congress approved the bill of carrying out the large-scale immigration reform assuming gain of external boundaries of the country. The introduction of the law in force is expected at the beginning of 2015.

Toughening of the American immigration law can lay down a heavy burden to India. In particular, reform will cause reductions of quantity and value addition of working visas of H-1 and L-1 which are owned by a large number of employees of the Indian IT companies working on outstaffing model in the large American companies. However, there is an opinion that the bill, on the contrary, will facilitate work as the citizen of India in the USA. Anyway the Indian technology companies are connected with the American market business of more than $30 billion[1]

2014: Visit of the prime minister of India to the USA

From 2006 to 2014 the Indian-American relations within which trade volume grew four times to $100 billion developed with variable success where there were more negative points rather, than positive. The visit of the Indian prime minister Narendra Modi to the USA which took place at the end of September, 2014 and his meeting with the president Barack Obama should open a new stage of cooperation of the states. 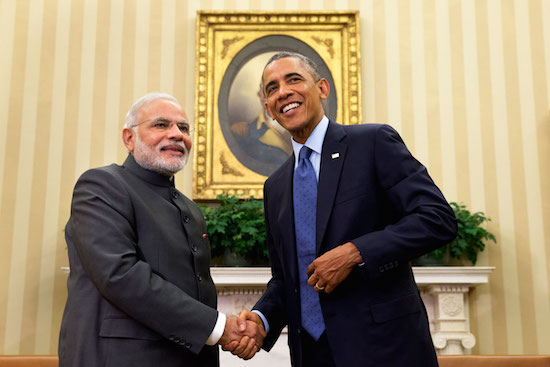 Details of a conversation of the American and Indian leaders are unknown, but, according to media, Modi came to the USA to try to attract investors to India within implementation of the new program of development of the country.

Despite attempts of close cooperation in different areas, in the relations of Delhi and Washington there are difficulties. So, the White House is not happy with illegal protection by the authorities of India of local solar power though the U.S. Government does the same at home.

Also the issue of further defense cooperation between the countries is not resolved, and the Indian tax policy in the USA is considered regressive.

Besides, in March, 2014 in India additional patent requirements which negatively affect patentability of the medicines imported from the USA were introduced.