DevOps (from engl. development and operations; in Russian it is usually said as "девопс") - set the practician, the development specialists aimed at active interaction with information technology service specialists and mutual integration of their workflows each other. Is based on the idea about close interdependence of development and operation of the software and it is aimed at helping the organizations to create and update quicker software products and services.

The dynamic changes happening in the world of technologies impose more strict requirements to the speed of reaction, time of release of releases of IT systems and capability of specialists of a different profile to the modern companies is open to communicate and to cooperate fruitfully. Do not make an exception and developers of the built-in systems. The demanded methodology of continuous delivering solutions shows special conditions to the organization of project processes, and testing stops being the final and isolated stage of all development cycle. However, implementation of testing as continuous parallel to development and maintenance of process generates the mass of questions to practice of such implementation. 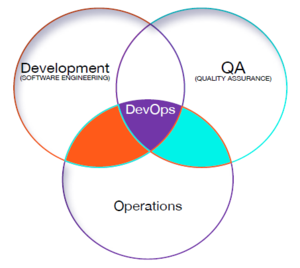 Main objective of transition to ideology of DevOps is desire to improve and accelerate customer service. Cost reduction, increase in automation, configuration management improvement, accomplishment of business requests are only satellite tasks. At the same time to different organization types the different structure of commands for effective interaction of Dev and Ops can be required.

With emergence in 2009 of methodology of DevOps which had to respond to the growing quantity of questions to the organization of active, continuous and productive interaction of IT specialists within the project the companies were separated into leaders and lagging behind depending on that, how well they managed to adapt process of testing to the declared principles. 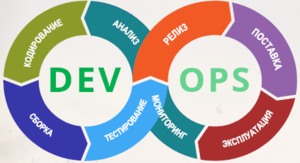 DevOps is rather new concept, and it still has no accurate, commonly accepted determination. In fact, it is set the practician, aimed at active interaction and integration of specialists in development, testing and maintenance. Use of DevOps provides stable, fast and reliable deployment of software including thanks to the continuity of testing that allows to avoid delays and the problems with quality inherent for classical model of project development.

The popularity of methodology considerably increased in recent years. According to RightScale 2016 State of the Cloud Report:[1], acceptance of DevOps increased from 66% in 2015 to 74% in 2016, and among the large organizations adoption of methodology is even higher – 81%. 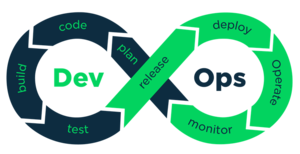 DevOps implementation – a difficult task for many respondents us the companies: new practice often requires other mentality and fundamental shift in corporate culture. And still advantages which DevOps and Agile promise developers, testers and all command, much more exceed any costs.

Broad adoption of methodology of DevOps will lead to the fact that from tasks of the system administrator those which are caused by imperfection of computer systems will disappear, need for the routine transactions which are not requiring profound knowledge will disappear and on this background qualification requirements will raise [1] (in more detail).

What structure or topology of the DevOps command is suitable for the organization, depends on many questions, for example:

At the end of February, 2020 IDC published forecasts for developers and DevOps. Analysts placed emphasis in the Chinese market and also practical recommendations on 2020 and the next years. Authors of a research consider that their work provides the comprehensive analysis of trends of the market of developers and DevOps.

1. Optimization of AI for developers

According to expectations of IDC, by 2024 56% of the companies will not limit use of AI and machine learning to application development - they will be applied in design, quality management, security and deployment of new technologies. By 2023 70% of the companies will invest means in retraining and training of employees, including in third-party services, for acquisition of new skills and acquaintance to new methods of work. 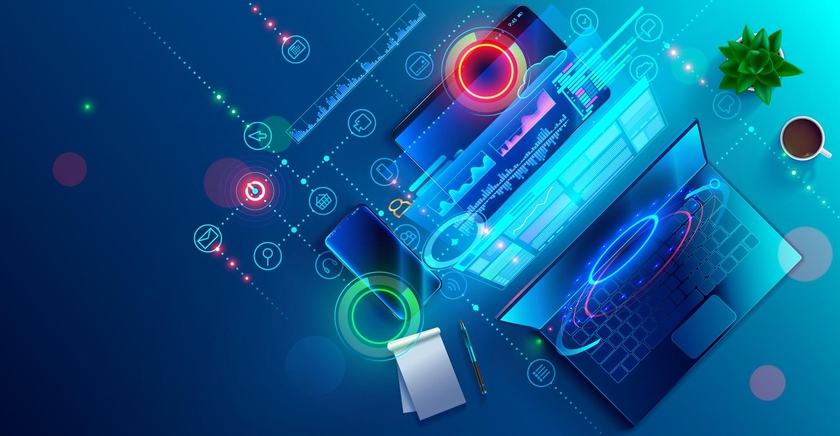 Many companies use DevOps methodology for acceleration of release of applications

2. Wide use of container platforms

By 2024 70% of new applications will be developed on container platforms for fall forward of deployment, coordination and portability of applications.

By 2023 the number of the organizations issuing codes for specific applications will increase from 3% to 30%. By 2024 at least 90% of new versions of applications of the corporate level will have the built-in functions of AI, though will make only 10% of all market.

By 2022 the accelerated upgrade of traditional applications and development of new applications will lead to increase in a share of cloud applicaions up to 25% that is caused by use of microservices, containers and the dynamic orchestration.

By 2023 40% of the DevOps commands will invest means in expansion of tools and will focus on key performance indicators of business, such as costs and income as transactions will begin to play more important role in performance of complex applications and a business impact.

7. Use of the corresponding analytical tools on the basis of software open source

The growing dependence of applications on components open source provided rapid growth of analytical tools. By 2023 tools of the analysis of program components which by February, 2020 are used only by the separate organizations will be used by 45% of firms.

8. The companies create own ecosystems of development

By 2023 60% of the Chinese companies will create own program ecosystems, and 50% will get access to key reusable components of the code from public libraries.

By 2024 the share of the open source software, received from the relevant libraries, will double, i.e. up to 25%, and other 75% will be configured according to business models of the organizations or scenarios of use. 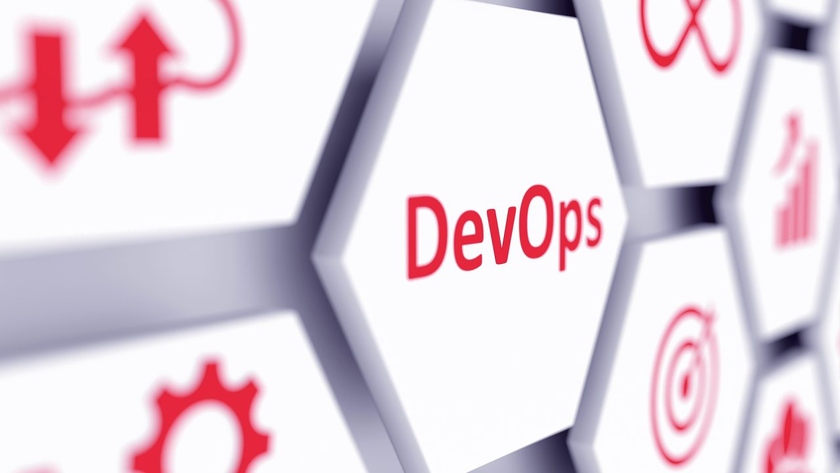 By 2024 less than 35% will fall on applications which are completely used by DevOps. The enterprises are recognized that not all applications can benefit by the difficult transactions covering development and production and connected with continuous integration and continuous delivery.[2]

2020: How to find the good specialist in DevOps and why process of search can strongly be dragged out

The culture of DevOps can develop in the companies or is evolutionary when employees understand that there are processes which can be automated, or for the purpose of implementation of new business objectives. But when the company needs to be delivered on rails new processes, the specialists capable to implement and develop the necessary tools are always required. Search of DevOps-engineers is a difficult process. The market of IT specialists in many respects now is overheated therefore person who would suit the company and it was ready to develop methodologies from scratch, it turns out to pick up not always quickly. Read more here.

At the end of November, 2019 the Forrester analytical company published a research in which listed top trends which should be expected in the field of DevOps in 2020.

Long time control of development of IT solutions was exercised by means of an operational model under the name Plan, Build, Run (planning, creation, operation). Its main problem consisted in insufficient flexibility. In the new digital world breaks between development and applications launch when experts should carry out quality check are inadmissible. 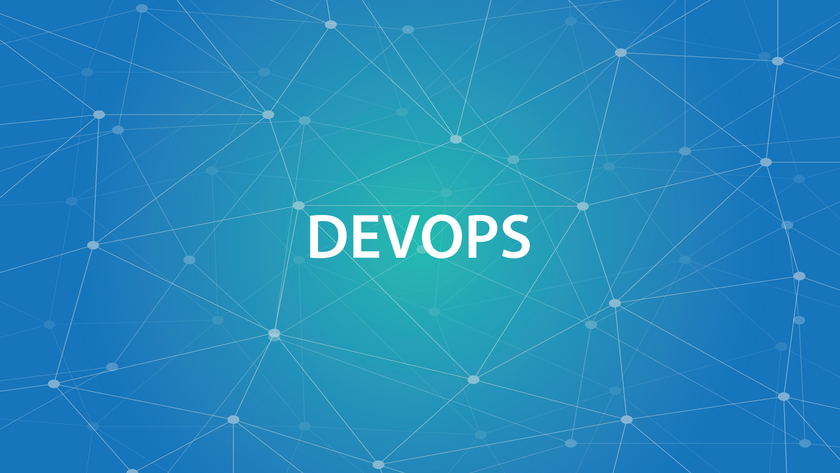 According to experts, will refuse this model of the company, including the step-by-step structured process with decision making upon completion of each stage.

The continuous management of corporate IT based on rules, dynamic control and automation

The main attention in 2020 will be paid to the guidelines, and more and more companies will use self-correcting dynamic controls. The automated platforms will submit substantially to management: sample samples and Wednesdays which specialists in start of products use will pass to automatic control taking into account deviations from observance of policy.

Forrester considers that the heads who are responsible in the company for management of corporate information technologies will stimulate developers to give and keep the promise at project implementation, but at the same time they will give them big freedom in how to do it. The main issue will be not "How to manage?", and "Than?", researchers predict. 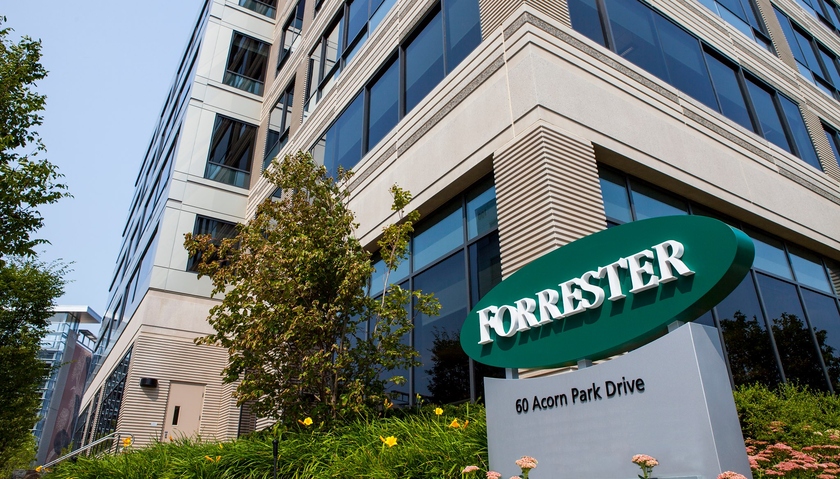 Emphasis on efficiency of development

Forrester predicts that in 2020 the tools measuring performance and value of development teams in real time will be widely used. At the same time developers will pay special attention to such indicator as customer satisfaction.

Passing to DevOps, business gets several advantages. Among them:

fast entry into the market (for example, reduction of time of a cycle and higher rates of deployment); quality improvement (for example, increase in availability, is less than failures, etc.); increase in organizational effectiveness (for example, more time is spent on the activity connected with increase in value of a product in comparison with losses, increase in amount of the functionality transferred to the customer).

Analysts of Forrester also consider that sets of work benches of application development DevOps will include even more often the built-in training aids to allow developers to purchase constantly new skills. It is connected with the fact that traditional learning tools, such as books, online training, video and offline - rates, are remote from tools which in reality are used by developers. Implementation of educational components building tools should accelerate programming process.[3]

Sberbank "sat down" on agile development: after Agile - DevOps implementation

Sberbank implements practicians of DevOps in development of automated systems. As the consultant for this purpose the bank according to the results of tender in July, 2017 attracted McKinsey company [4].

Followed from the tender documentation published by Sberbank that the bank implements DevOps regarding subprocesses of continuous assembly, deployment and delivery (Continuous Integration, Delivery and Deployment). Automated systems for DevOps implementation from among direct systems of bank had to be chosen together with McKinsey. Read more here.

Alfa-Bank considers implementation of culture of flexible design one of the main achievements in IT in 2016. It follows from the annual report of the bank published at the end of June, 2017. 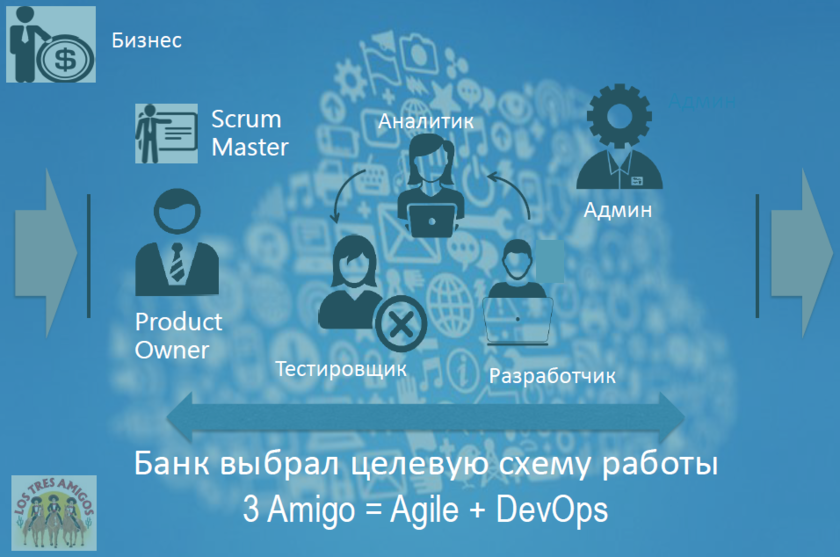 Transfer of IT infrastructure to the Cloud