Statistics in this article is constantly updated. Add the page to favorites that always on the basis of the facts to understand as the economy of Russia develops.

Up-to-date data in recent years are provided in this article. Process of economy of Russia earlier in article the Economic history of Russia. 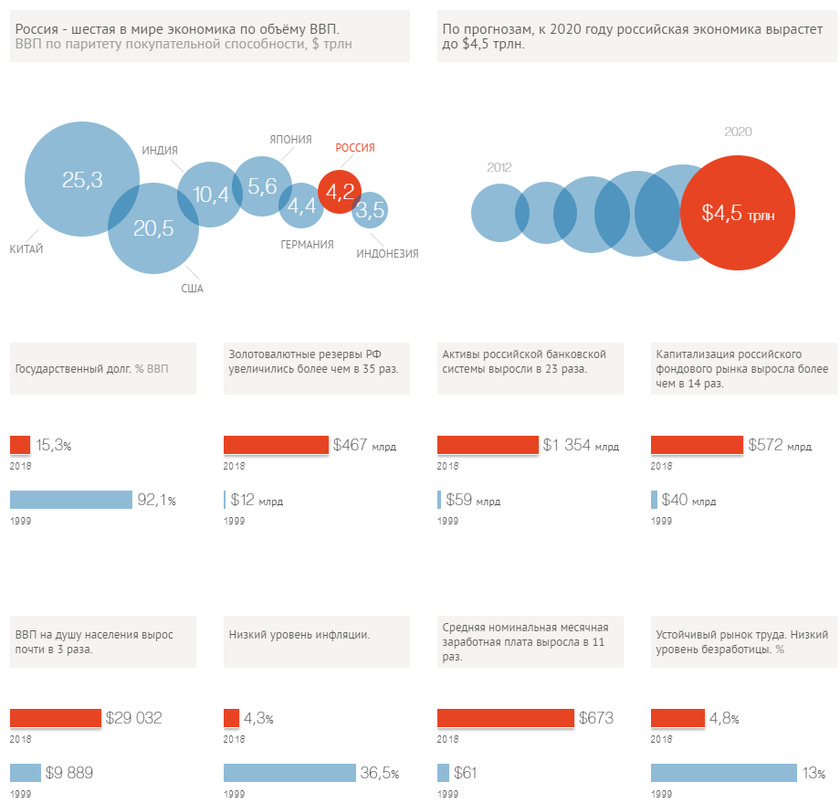 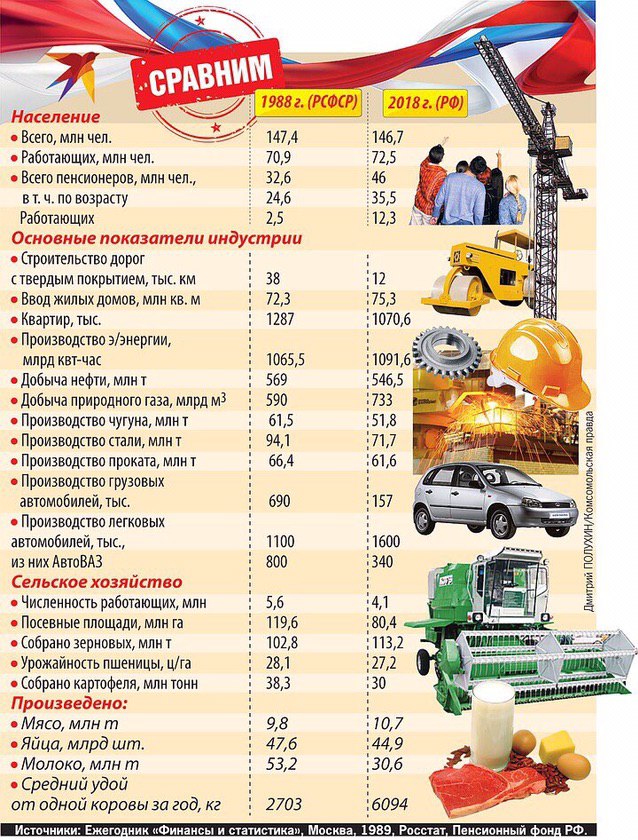 How at approximately same indicators by the majority of types of products at the modern Russian Federation and RSFSR in 2019 commodity abundance is observed?

If to speak about the industry then two main factors. The first – ceased to support huge army and military industrial complex. At peak in the USSR there was an army in 4-4.3 million people, in 2018 – to 1 million. On army at the USSR about 8-9% of GDP a year, now – 3.6% left. In transfer to our money, it as now instead of 4 trillion budgeted expenses would be 8.5-9 trillion.

The second factor – inclusion of Russia in globalism. Refused many inefficient productions, having replaced them with import. First of all electronics (from smartphones and computers to home appliances), light industry and so forth consumer goods.

Generally, whatever one may do, convergence and our defeat in Cold War can and "the main geopolitical accident" for someone, but for ordinary people all this was the benefit. And only, it seemed – it was just necessary to cease to butt a horn with the West.

The second part of a question – on food. Here too "worked out the market". In the USSR the same grain about 5 million tons decayed (and in general up to 5-10% of products). In 2018 all farmland put into circulation has an owner. Plus of the Russian Federation reset such outskirts as Central Asia and the Caucasus (more than 60 million people) from feeding. Besides globalism – abroad food Russia buys plus in 2018 for $30 billion a year (before import substitution there were $43 billion).

In general, as it became clear, even a little freedom for a private initiative changed the country. Now 30-40%, other 60-70% little effective state capitalism – or sitting on the Soviet backlog (oil, gas, other natural minerals, transport), or eating the activity in minus are the share of competitive, market economy in Russia (the same military industrial complex; for example, more than 250 billion rubles are long only one Ural Carriage-Building Plant).

It is possible to imagine to what growth the Russian economy will go if its market part is 50%. Yes plus to it to add fair courts, firmness of a private property, public control over state corporations, etc. 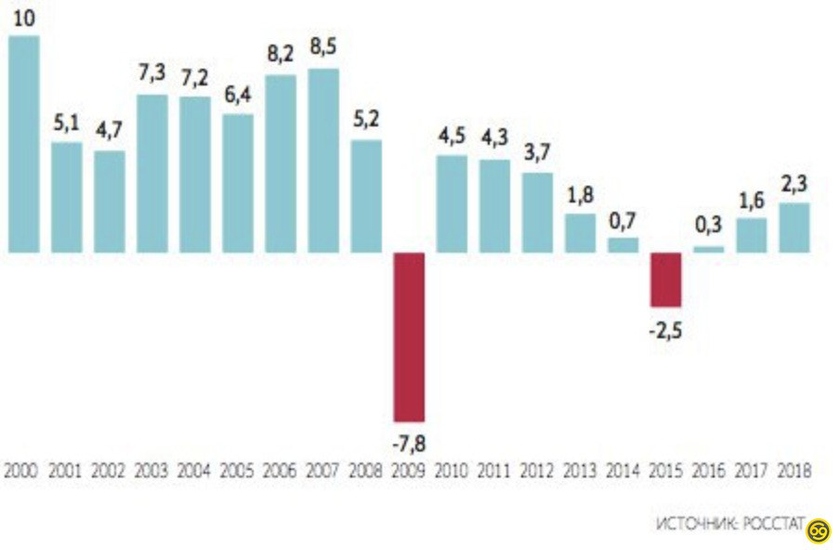 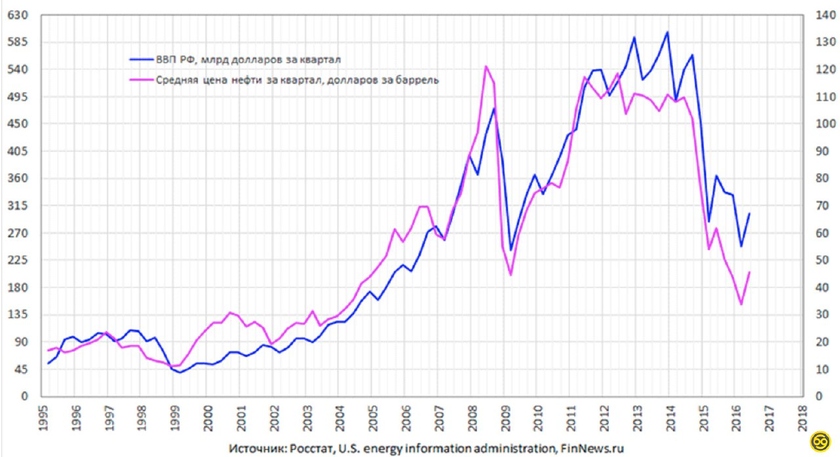 Correlation of GDP of Russia and prices of oil

The number of the companies and bankruptcies in Russia 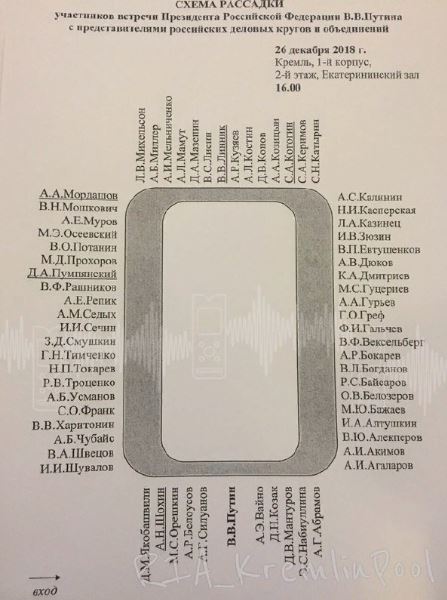 Business community of Russia for December, 2018

Branches of the economy

Industry structure of 500 largest companies of Russia at the end of 2014. 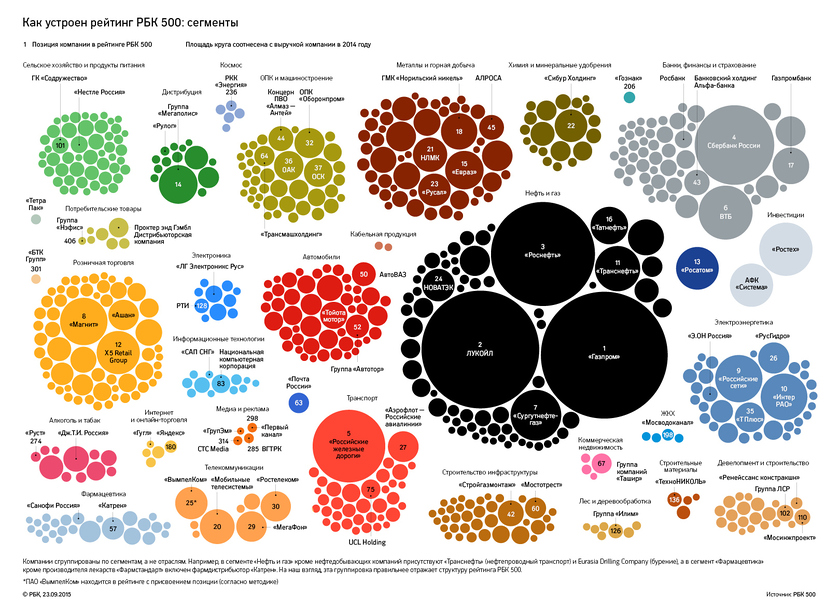 The card of property of 500 largest companies of Russia at the end of 2014 is given below. 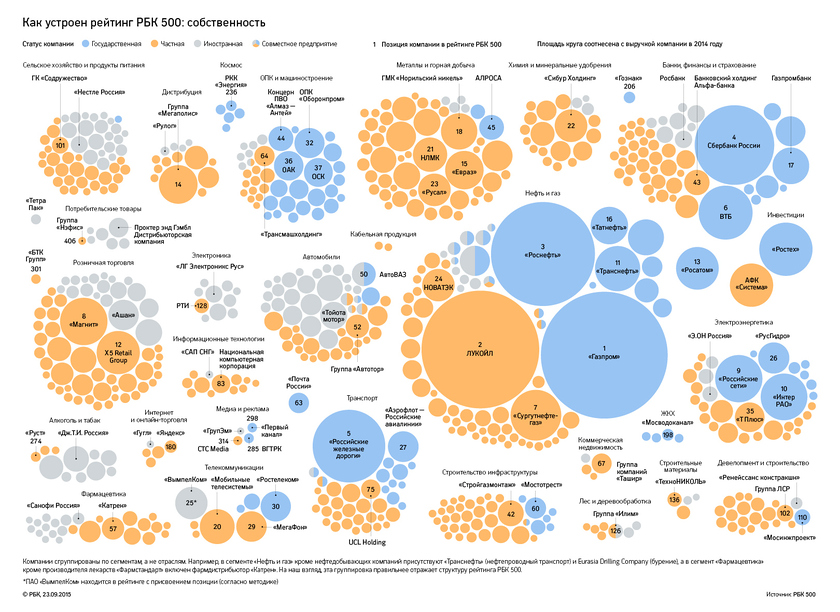 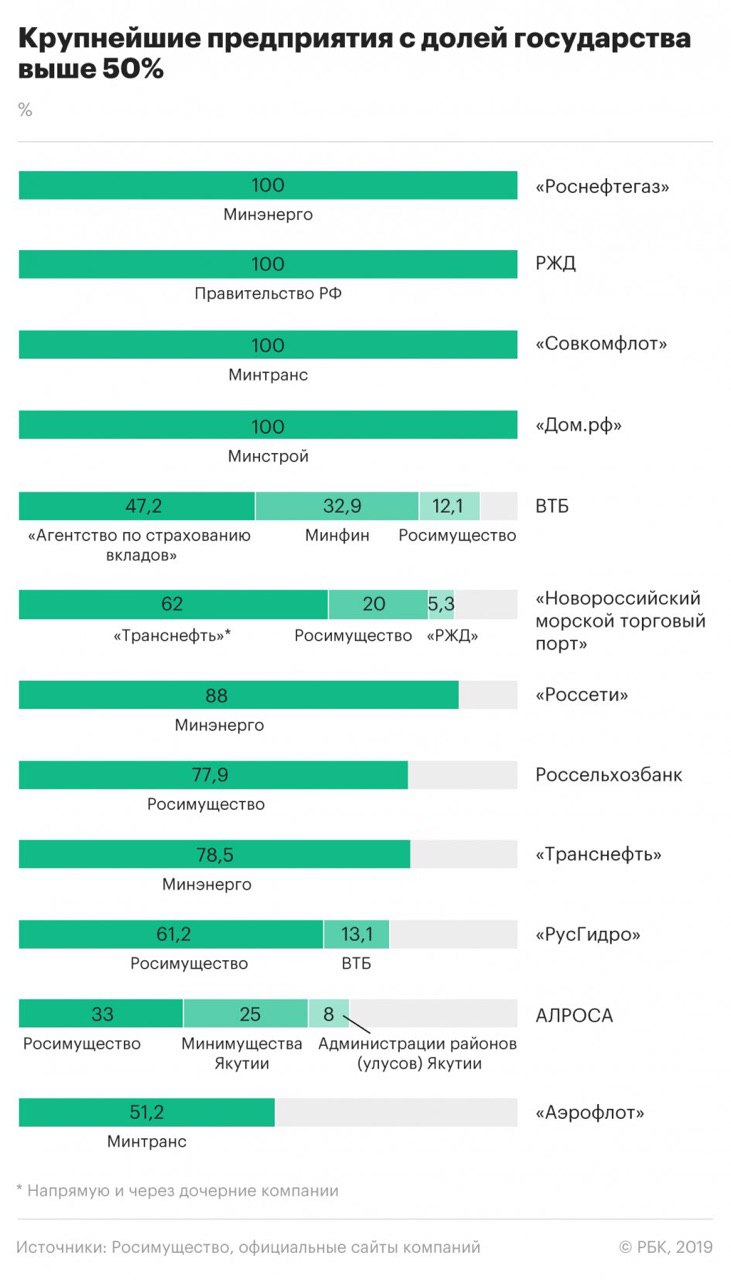 The enterprises of military industrial complex of Russia are "starved" and need the large-scale program of debt relief, the Deputy Prime Minister Yury Borisov said in July, 2019. According to him, total portfolio of the credits to defense sector exceeds 2 trillion rubles, and service of these loans costs 200 billion rubles a year.

But this digit "fights" with a target profit of the enterprises of military industrial complex, Borisov emphasized. As a result the defense plants making real products are forced to give all earnings to banks, "which do not make anything", the Deputy Prime Minister was indignant.

"The main body of the credit will not be never extinguished any more", - he complains. If to write off a third of debt - 600 billion or 700 billion rubles, then defense sector will be able to save about 70 billion rubles a year on service of loans and to invest more than 1 billion dollars in production expansion of production of weapon or diversification. 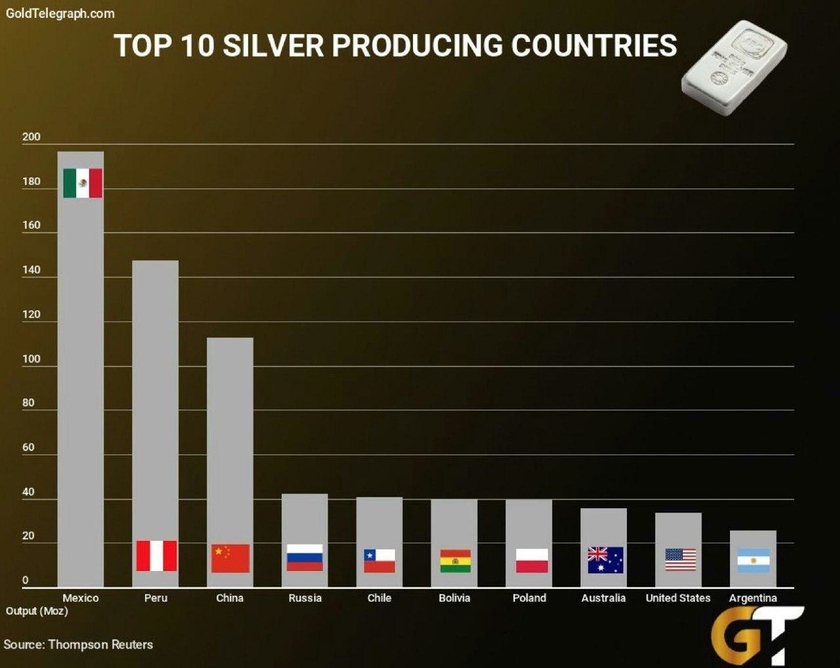 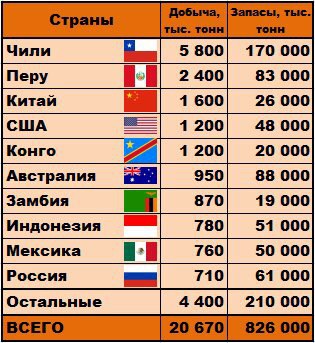 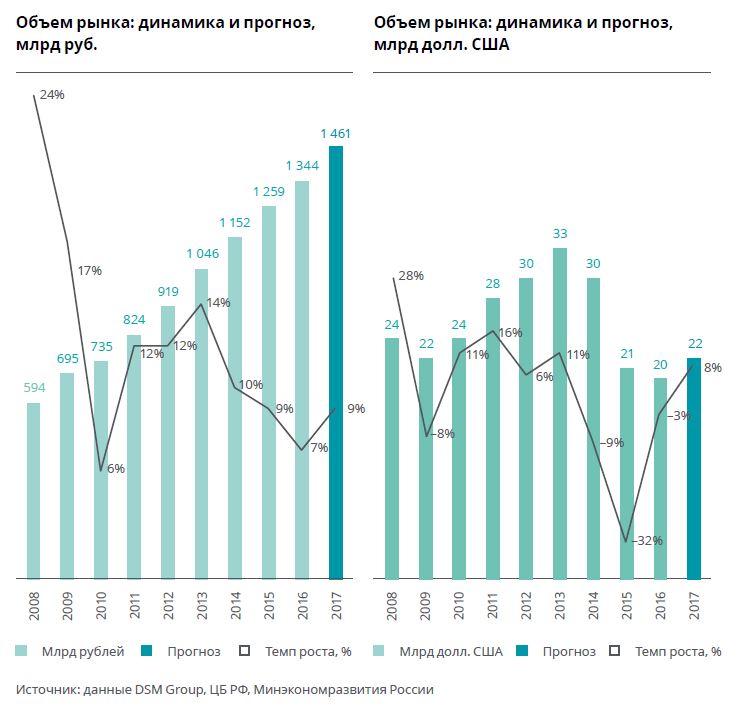 Russia world leader in the foreign investments from the phantom organizations

In 2019 ​​ the IMF estimated a share of the "phantom" foreign investments in Russia.

Russia won first place in the world on attraction in the economy of the "phantom" foreign investments  — money from the foreign dummy companies. A considerable part of these investments  — not so foreign by origin, but Russian. 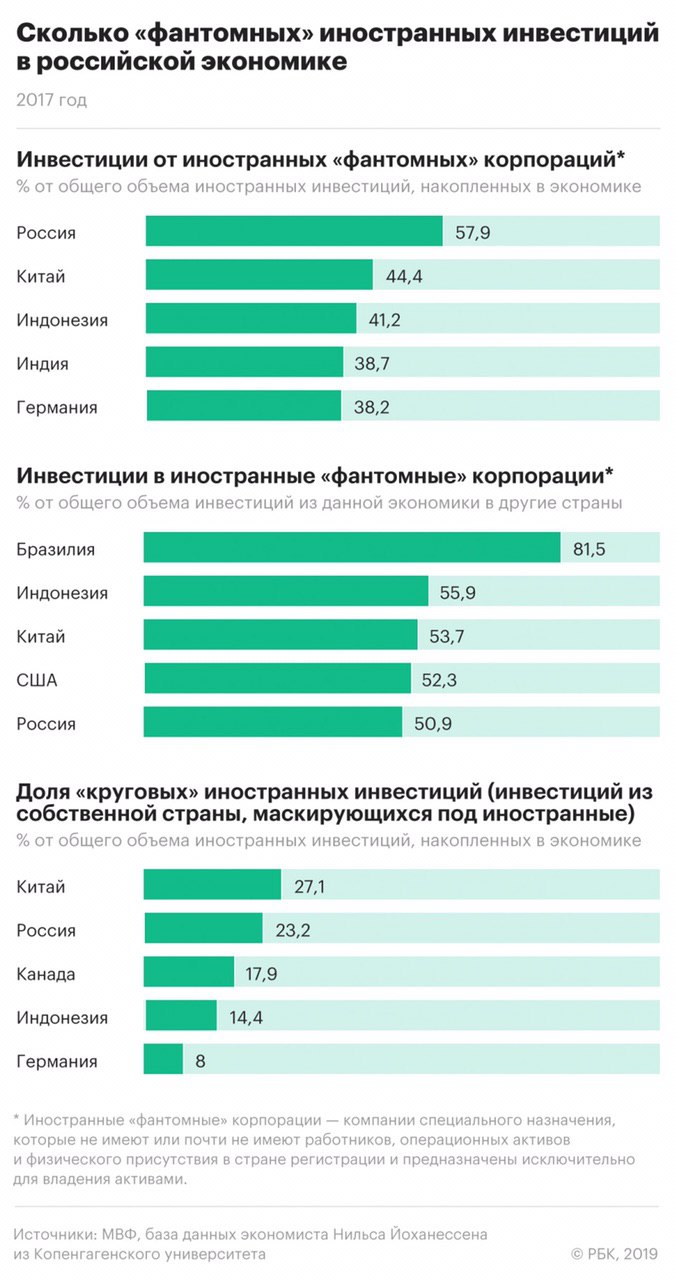 Plan of improvement of the investment climate for 12 directions

On January 17, 2018 the Government of the Russian Federation approved the plan under the name "Transformation of Business Climate". The plan is directed to improvement of the investment climate in 12 directions [1] (in more detail).

At the end of 2017 the investment volume into fixed capital grew by 4.4% in annual terms. In general, commenting on growth of investments into fixed assets, it is possible to speak not only about growth, but also about structural adjustment of the investments. It is necessary to consider that the considerable share of internal investments was provided earlier by the enterprises of an oil and gas sector which were forced to contract or freeze a part of projects in connection with deterioration in an economic and political environment. At the same time in 2017 growth petrogas of the sector was recovered in parallel with growth of investments into the import-substituting industries and in general to the non-oil sector.

Surge in investments into bonds

Only for the last week of January, 2017 of EU country invested 140 million dollars of the investment capital in the Russian bonds. It became a peculiar record in three years — practically for the entire period of the beginning of sanctions and countersanctions. It is remarkable that since the end of 2016 the economy of the Russian Federation received about 700 million dollars of foreign injections.

Recently strong indications of "thaw" in respect of the investment climate in Russia are noticeable. Among the reasons of it experts call increase in prices for oil and some perspectives of improvement of the Russian-American relationship designated later Donald Trump's elections as the U.S. President. Besides, in the European Union voices of discontent with sanctions measures against the Russian Federation sound more actively. According to numerous forecasts, positive trends will remain. It can be also promoted by decrease of the inflation rate and gradual reduction of a rate by the Central Bank.

Inflow of the foreign investments to economy of the Russian Federation in the first half of the year 2013 grew by 32.1% in comparison with the same period of last year, including straight lines — for 59.8% (Rosstat).

"As of the end of June, 2013 the saved-up foreign capital in economy of Russia was 370.6 billion US dollars that is 10.7% more in comparison with the corresponding period of previous year", said in materials of Rosstat.

The volume of the foreign investments which came to Russia for the first nine months 2012 was 114.5 billion dollars that is 14.4 percent less, than for the same period the previous year. It is reported in materials of Rosstat.

Leaders in investment into the Russian Federation appeared:

In general as of the end of September, 2012 the saved-up foreign capital in the Russian economy grew by 9.3 percent to 353.3 billion dollars.

On survey results of UNCTAD, Russia divided with Germany the eighth place in the list of the states where global corporations in 2012-2014[2]are going to invest ]. 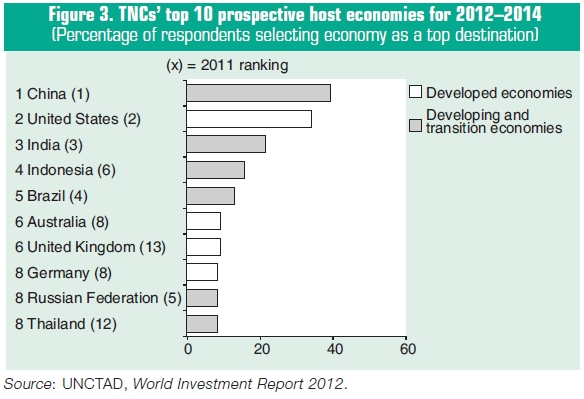 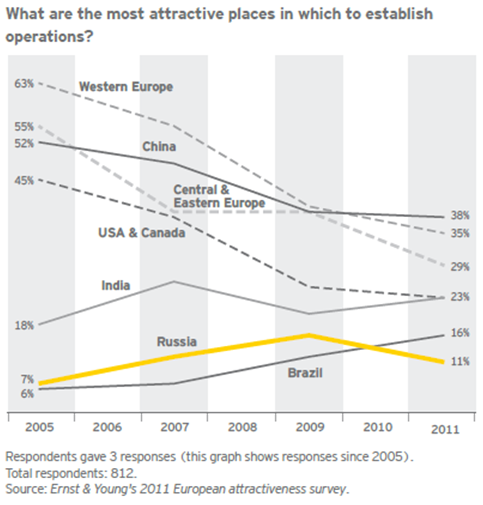 Balance of payments of Russia

The balance of payments of the country - a ratio of the money payments coming to the country from abroad with payments abroad during certain time (year, quarter, month).

The balance on the account of current transactions represents an export indicator from the country (NE). The balance is positive if export exceeds import.

"The growing surplus of the current account became result of significant reduction of a negative deposit of balance of services and investment revenues, including due to reduction of payments on service of an external debt in the conditions of decrease in total amount of debt to nonresidents", - the Central Bank notes.

At the same time the surplus of the account of current transactions grew in the IV quarter 2015 by 73.3% to $13.0 billion against $7.5 billion in the III quarter.

The international reserves represent the highly liquid financial assets which are at the disposal of the Bank of Russia and Government of the Russian Federation. They consist of assets in foreign currency, monetary gold, special drawing rights (SDR, special drawing rights, - the settlement monetary unit used by the International Monetary Fund, the IMF), a reserve position in the IMF and other reserve assets. 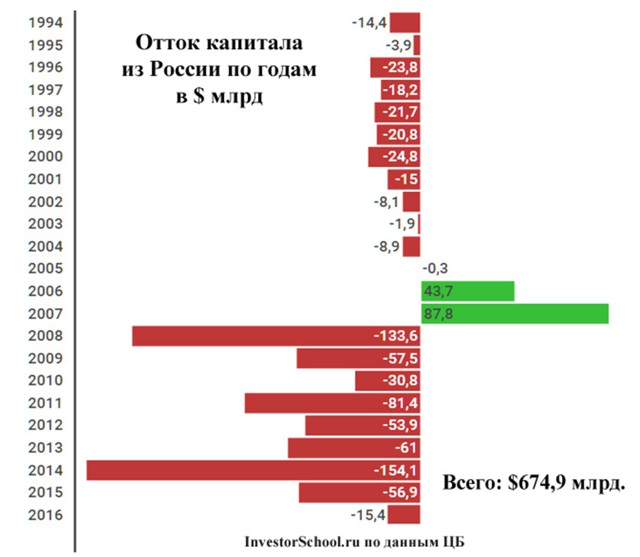 The amount of money supply in the address (Sq.m) in Russia, billion rubles. Given on the middle of 2019.

Accumulation of money can serve as the reason of increase in currency circulation. Because of it it is necessary to release more means of payment. Increase in money supply in the Russian economy is one of the main factors of inflation in Russia.

According to the Central Bank, inflation in Russia in 2019 was 3%. 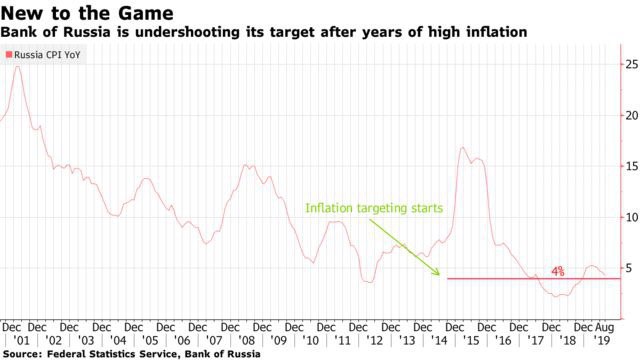 Inflation in 2013, according to preliminary estimates Rosstat, was 6.5 percent. On December 31 it is reported on the website of the department. Data are obtained on the basis of price analysis on 64 types of the main goods and services in 271 Russian cities.

The S&P agency began to rank the Russian Federation in 1996 at the request of the state. The Russian government pays rating services S&P and can refuse them at any time. How many Russia pays for services S&P, it is precisely unknown.

At S&P there are also sovereign rankings which the agency maintains voluntarily, without receiving money from the issuer (unsolicited ratings). Free sovereign ratings minority: on a "non-commercial" basis, for example, the ratings of the United States, Great Britain, Germany, France, Japan are conducted.

Since 2004 all three main rating agencies (S&P, Moody's and Fitch) maintain the sovereign rating of Russia within so-called investment category.

At the beginning of 2014 economists of Heidelberg University in Germany Andreas Fues and Kaj Goering in the academic research made a hypothesis that rating agencies are not objective similarly to all sovereign borrowers: they are more favorable to the countries of the basing (for S&P it is the United States). In reply S&P said that it does not agree with the statement of scientists.

Investors are not inclined to attach great value to actions of rating agencies, Bloomberg claims. The analysis of rating actions of Moody's and S&P from 1970th and the documented market reaction on each of these actions shows that approximately in half of cases of quotation of government bonds changed not in that direction which was dictated by logic of rating action. A classical example - historical lowering the U.S. credit rating in August, 2011 by the S&P agency: then investors did not begin to reset the American state papers, on the contrary, their price grew, and profitability decreased to record values.

Doubtful operations on cashing in

According to the Central Bank for September, 2019, the volume of doubtful operations on cashing in decreases. 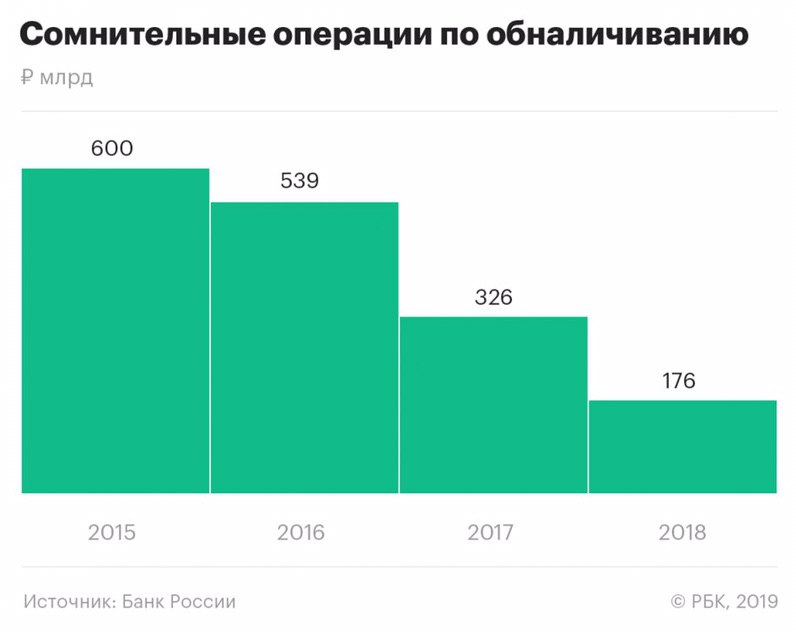 At the beginning of the 2010th the World Bank allowed three scenarios of reduction of the population of Russia of working-age. 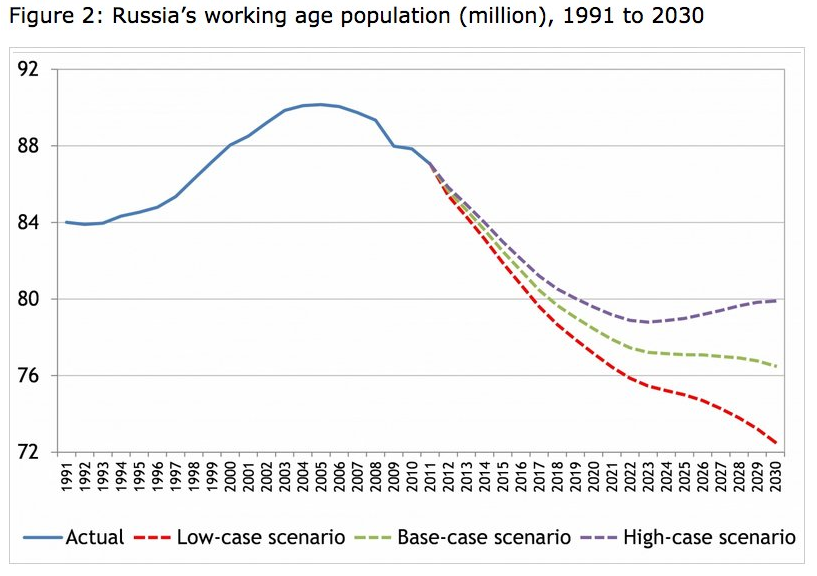 Several separate articles are devoted to labor market on TAdviser:

Positions of Russia in ratings 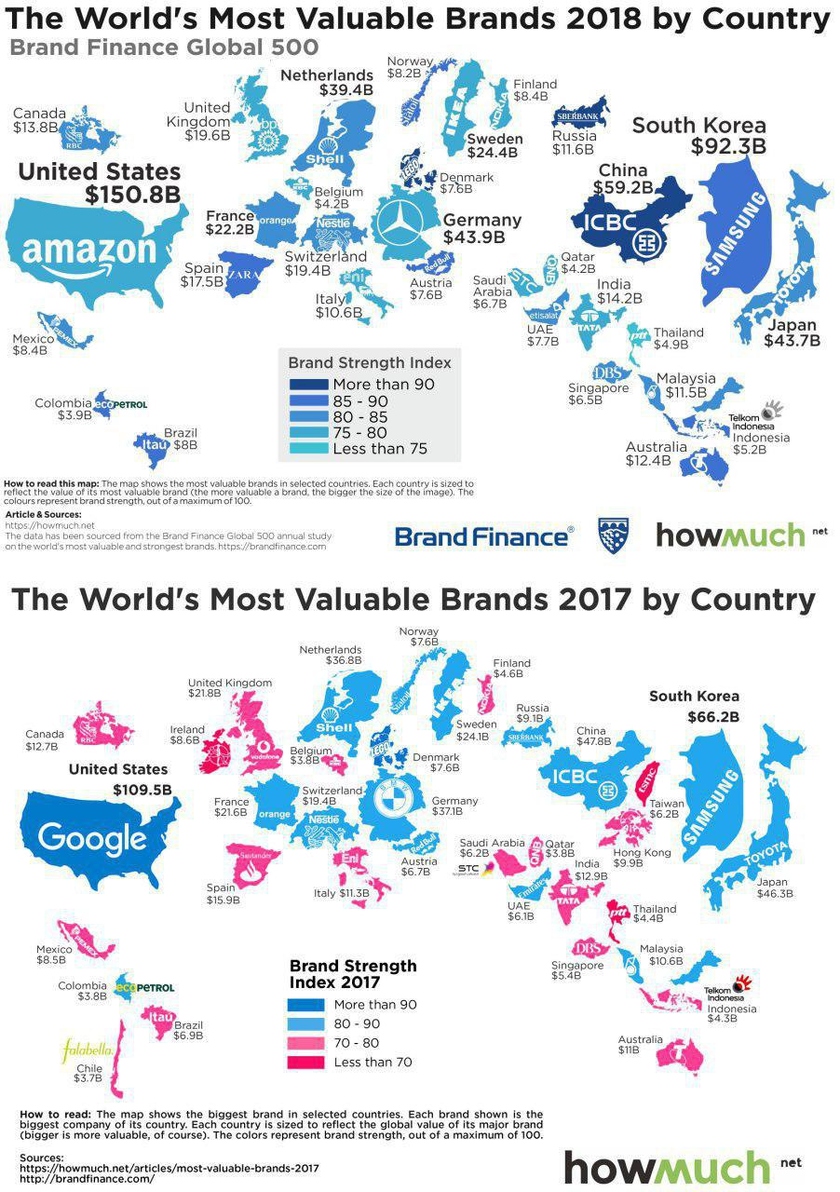 Participation in the international organizations

Economic cooperation with other countries

In total for September, 2019 17 countries of the world are debtors of Russia with the total amount of debts nearly 27 billion dollars. 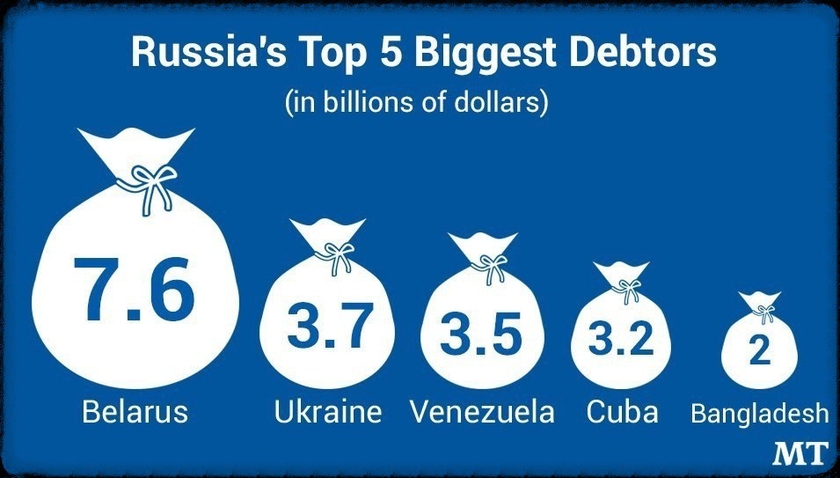 The largest debtors of Russia for September, 2019

On the first place Belarus from 7.6 billion dollars, Ukraine and Venezuela from 3.7 and 3.5 billion, Cuba 3.2 and also Bangladesh 2 billion. 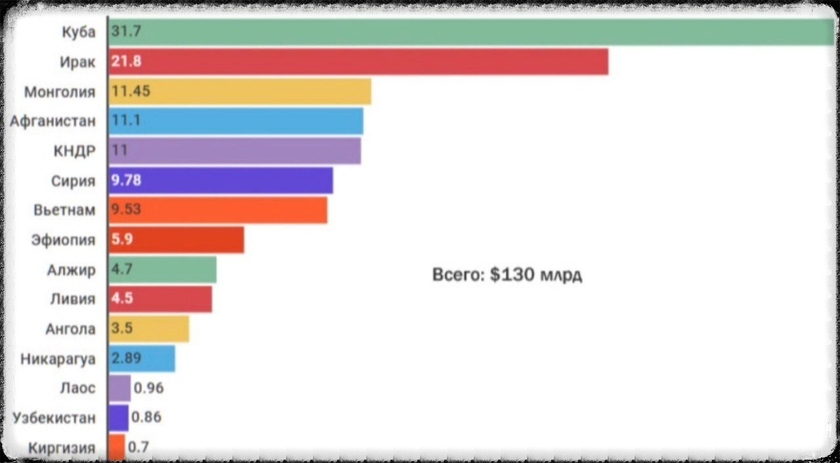 The coma and what debts were remitted by Russia for August, 2019.

Among the countries of members of "Group of Eight" by 2019 Russia became the leader in quantity of cancelled debts.