In article the world market of industrial automation, including adjacent areas is considered.

According to analysts of Fortune Business Insights[1], by 2026 the market of industrial automation will grow to the amount of $300 billion, showing cumulative annual average growth rate about 8.5%.

Market leaders are invariable for many years, their solutions are checked by time and are used at many enterprises. The irremovability of positions is in many respects connected with the fact that producers offer the finished infrastructure, and in terms of operation it is profitable to clients to have the equipment of one vendor as it facilitates search and replacement of component parts and also training of service staff.

Let's provide statistics on revenue of the largest players of the market of industrial automation. 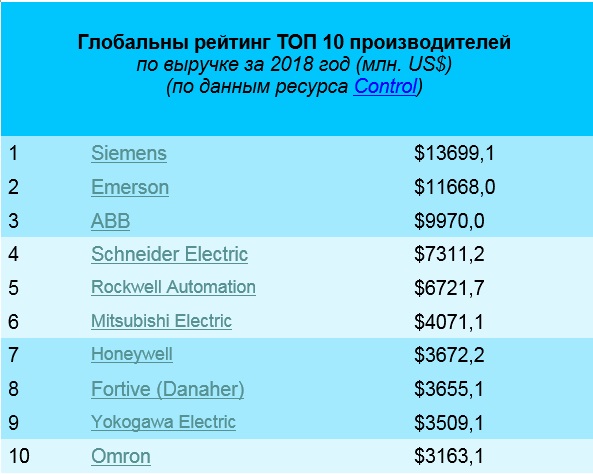 Siemens – the unconditional leader in the Old World. Most industrial enterprises of Western and Eastern Europe apply solutions of this producer. Its such products as controllers, the CNC, drives are most demanded. Products of this producer also are very popular in Russia, the line of S7 controllers is especially known.

In the New World products of Siemens are appreciated much below: there the vendor took only the ninth place on revenue. In North America in leaders Emerson, with the product line Delta V is surely beaten out.

Schneider Electric - the large supplier of a switching equipment. But besides the company offers the platform for automation of EcoStruxure which allows to implement IIoT technologies actively.

Depending on the region the market of the systems of industrial automation and management is divided into North America, Europe, the Pacific Rim, Latin America, the Middle East and Africa. The Pacific Rim share in the total amount of the market in 2018 made more than 30.0% thanks to presence of key players of the market and the new companies in the region.

Some of the famous regional players is Kawasaki Robotics, Mitsubishi Electric Factory Automation and Yokogawa Electric Corporation. Besides, it is expected that in the Pacific Rim significant growth will be observed, at the same time here the highest indicator of an annual gain (CAGR) it should be 11.0% during the period till 2025.

Growth of the Pacific Rim can be explained with the increasing demand for the best solutions for management of industrial enterprises in such countries as China, India and South Korea. After the Pacific Rim the regional market of North America occupies a considerable share in terms of revenue, and it is expected that it will grow at stable rates.

(According to Grand View Research[2])

On the covered fields of the industry the market of automation systems is subdivided into the following segments: space and defense, automobile, chemical, power, product, health care, metallurgy, oil and gas.

It is expected that manufacturing industry will remain in leaders in implementation of the automation equipment till 2025-26. The industries of the food industry and production of drinks will become the following - these segments are most sensitive to product quality and further implementation of automation will allow to increase performance, to increase reliability, to reduce waste and to optimize expenses.

Among all fields of the industry in the predicted period the greatest CAGR is expected in a health care segment – 9.6%. In the Pacific Rim chemical industry as increase in number of these enterprises in the region is predicted will be in the lead.

(According to Grand View Research[3])

This segment of the market is subdivided into the managements (DCS) distributed sistems, logic controllers (PLC), supervisory control and data collection (SCADA) and others.

The Segment of DCS occupies the greatest share in terms of revenue now and, as expected, will dominate in the market of industrial automation and industrial control within the next six years. This growth is explained by the growing industrialization in developing countries, such as China, India and the countries of the Middle East. Such economies are characterized by the fact that in them the state support of industrialization and development plans in such sectors as power and mechanical engineering increases.

Such factors as detection of new reserves of crude oil and need of increase in standards of security and protection at oil refineries, stimulate demand for DCS in the oil and gas industry. Nevertheless, implementation of the SCADA systems quickly grows in such sectors as production, water supply and the sewerage.

Leading companies, such as ABB and Schneider Electric, have an extensive portfolio of the SCADA systems. The known products include Symphony Plus and SCADAvantage from ABB and OASyS SCADA from Schneider Electric. It is predicted that in a segment of management systems of SCADA the highest indicator of CAGR will be 9.6% from 2019 to 2025.

(According to Grand View Research[4])

According to Fortune Business Insights[5], depending on type of components the market of the systems of industrial automation and management is divided into human-computer interfaces (HMI), control valves, sensors and other equipment.

The Segment of control valves holds the greatest share now and, according to plans, will save the positions during the predicted period. The considerable market share of control valves is explained by their mass implementation in the oil and gas industry thanks to advantages which they offer in respect of pressure monitoring and temperature in the course of operations on production, processing and transportation. Besides, the growing number of power plant worldwide and the growing need for energy for developing countries, as expected, will increase demand for the regulating equipment in the sector of electricity generation. The annual gain in a segment of instrumentation and automated control systems is expected around 9.5%.

This segment of the market is a little isolated and has the statistics. In this sector the leaders; forecasts for revenue gain, a little different from other market, therefore we will understand it in more detail. 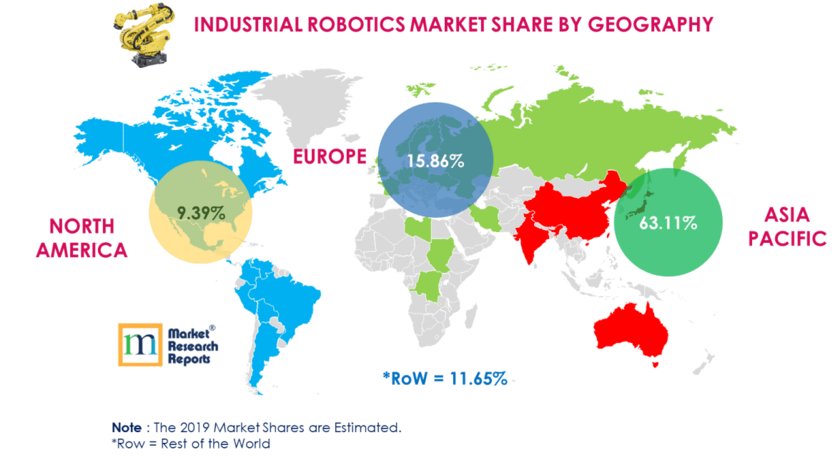 According to[6], industrial robots gained the greatest distribution in the Pacific Rim, unlike Eurasia and America where the share of manual work, for example, in mechanical engineering is still high. The Asian region occupies more than a half of the industrial robot market.

It is expected that the market of industrial robotics in the Pacific Rim will grow by 13.39% in terms of income from the robotic systems, remaining the largest regional market in the world. Revenue will reach $97.0 billion by 2026. Annual shipment in will increase to 1.11 million units in 2026 with CAGR in 2019-2026 of 17.89% here.

Leaders of a segment of industrial robotics:

Key players of the market are concentrated on absorption and cooperation in implementation of new technologies which will allow to raise quality of the made products and to lower costs for production.


In the head the concept of Industry 4.0 which implementation will allow consumers to use more actively technologies of industrial automation is put, to coordinate all available systems in a single system of production management that will give the chance in advance to predict need of carrying out repairs and will allow to refuse unplanned idle times.

On the agenda implementation of industrial Internet of Things (IIoT), using technologies of wireless communication of a 5G.

Use of the latest technologies for opinion of analysts will also become the main driver of growth of the market of industrial automation.


Separately It should be noted that the coronavirus pandemic will become one of automation market growth factors too.


Market participants expand possibilities of industrial management systems for use them in such industries as transport, mining and metallurgical and also aerospace and defense industry. Investments into research and development in the field of industrial automation and robotics considerably increase worldwide. Thus, evolution of digital industrial solutions lays a way to rapid growth of the market of automation systems and management worldwide.

The cyber security problem will be the most restraining factor for many enterprises, first of all defense, as before.