Regulation of the Internet

According to results of the research Pingdom, by data for June, 2010, in the world there were 1.97 billion Internet users that speaks about growth by 14% in a year. Most of all Internet users are in Asia - 825 million. Europe (475 million), North America (266 million) and Latin America (204 million) follow. Least of all net surfers in the region Australia and Oceania - 21 million.

Number of the websites

For summer of 2016 according to researches, from more than one billion available websites, only 25%[1] are active]. 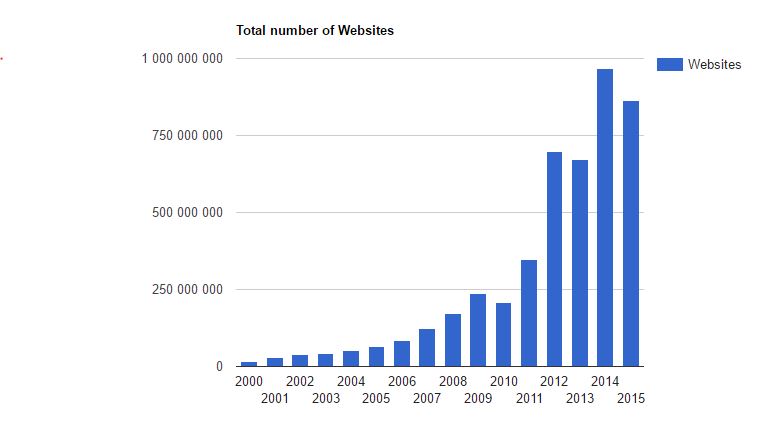 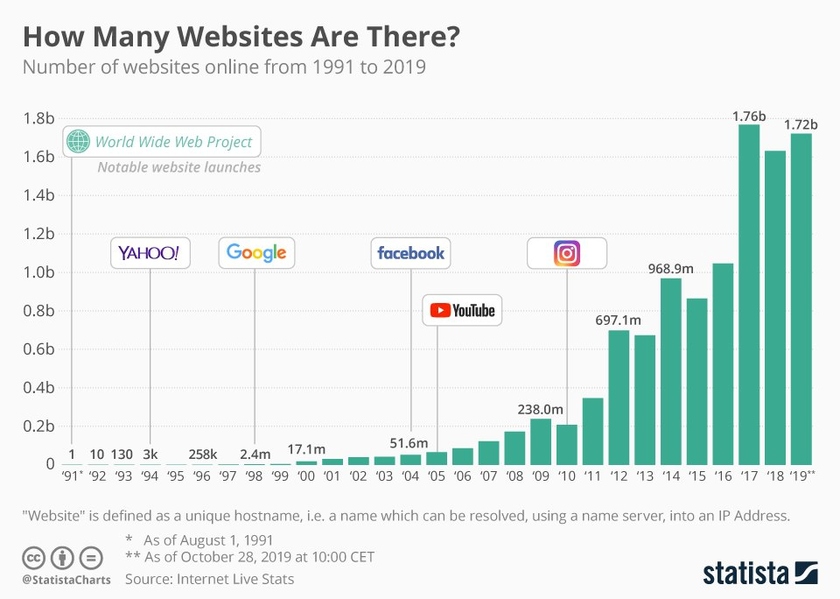 The largest websites of the world

In June, 2019 search systems got the largest volume of traffic. Versions of the domain of Google for the different countries and the services belonging to the searcher collected in total 90 billion visits. 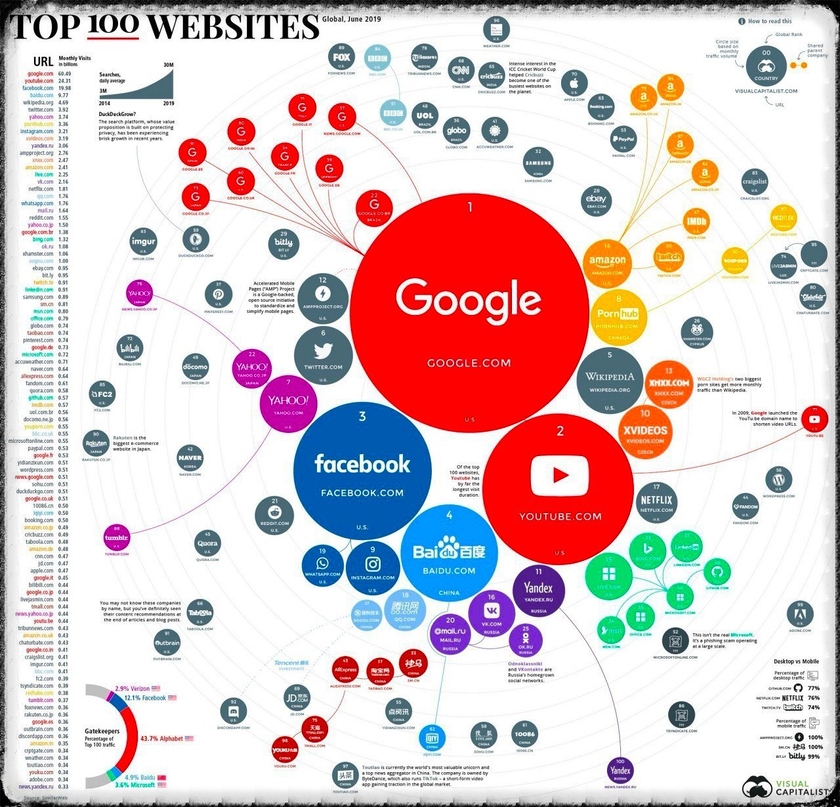 On the 11th place to one hundred most visited sites there was Yandex. The number of visits on yandex in June made 3.06 billion. Social networks, including Instagram, Twitter, LinkedIn and others continue to show good traffic. One more important driver of traffic — services of video and streaming. 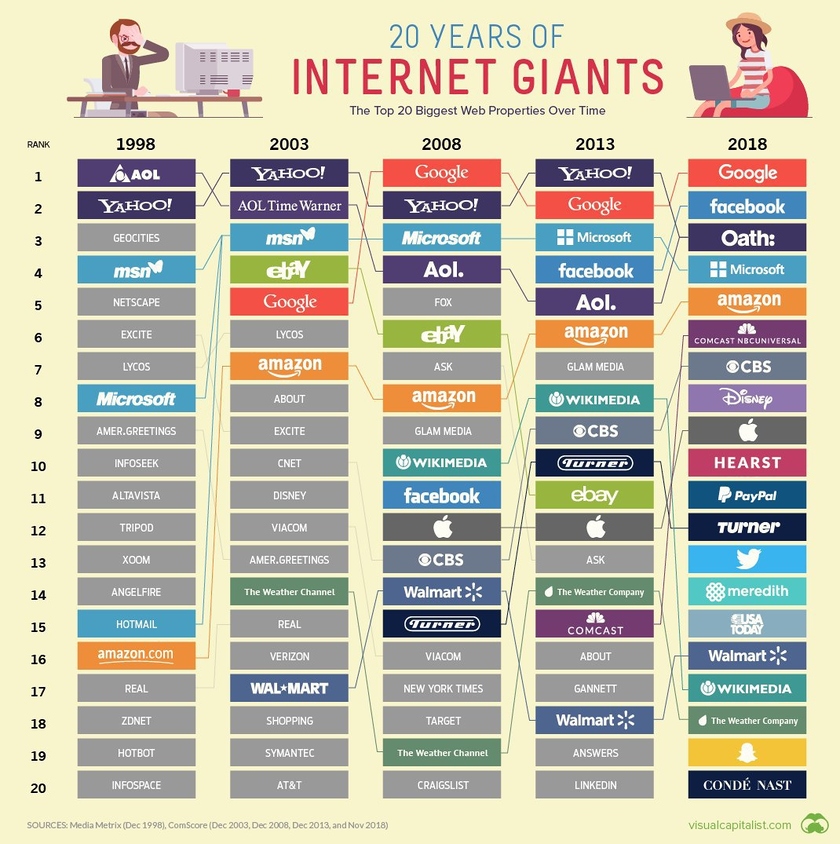 In 2019 media consumption on the Internet for the first time exceeded television. 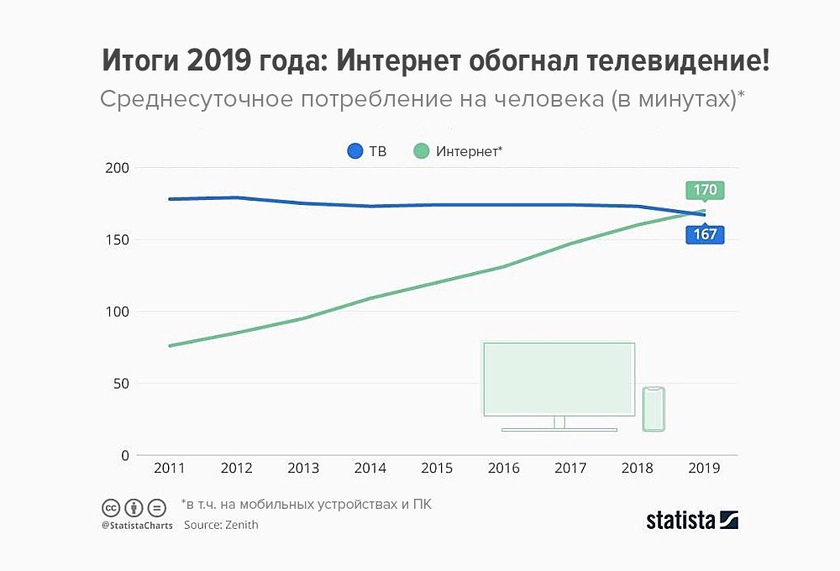 During 2010 users browsed daily on average about 2 billion videos on YouTube service, uploading to this site more than 35 hours of video content a minute. On Facebook monthly load about 20 million videos.

Also researchers counted that on the largest photohosting of Flickr more than 5 billion photos are already stored, and it is every minute uploaded to the site on 3 thousand new images.

The autonomous Internet in Russia

National segments of the Internet

On August 5, 2019 the company Qrator Labs specializing in counteraction DDoS-to the attacks and ensuring availability internet- resources, provided results of a research of influence of possible failures of networks of systemically important operators communications on global availability of national segments of the Internet.

This research explains how failure of one autonomous system (AS, AS) affects the global connectivity of the certain region, especially in case it is about a krupnomprovayder of the Internet (ISP) of the country. The connectivity of the Internet at the network layer is result of interaction of autonomous systems of telecom operators. Than the number of alternative routes of traffic between autonomous systems are more, especially and stable the Internet segment is fault-tolerant. Existence as is possible bigger quantity of alternatives is the only way of diversification of the market.

Global connectivity any AS irrespective of whether it represents the minor supplier of the Internet or the international giant with millions of consumers of services, depends on quantity and quality of its ways to Tier-1 to providers. As a rule, Tier-1 means the international company offering global service of IP transit and connection to other Tier-1 to operators.

The rating of stability of national network segments the Internet is calculated Qrator Labs the fourth year in a row.

Measure calculation for each explored country was made by the following technique:

At the first stage using the system of modeling of work of the global Internet Qrator.Radar for each operator in the world calculation of all alternative routes of passing of traffic to transcontinental Tier-1 of operators was made.

At the second stage using base of geodata of IPIP the country was compared to each IP address of each autonomous system.

Further for each AS the share of its address space corresponding to the selected region was counted.

For formation of rating operators whose failure can lead to loss of global availability of the greatest percent of autonomous systems of the set national segment were selected. 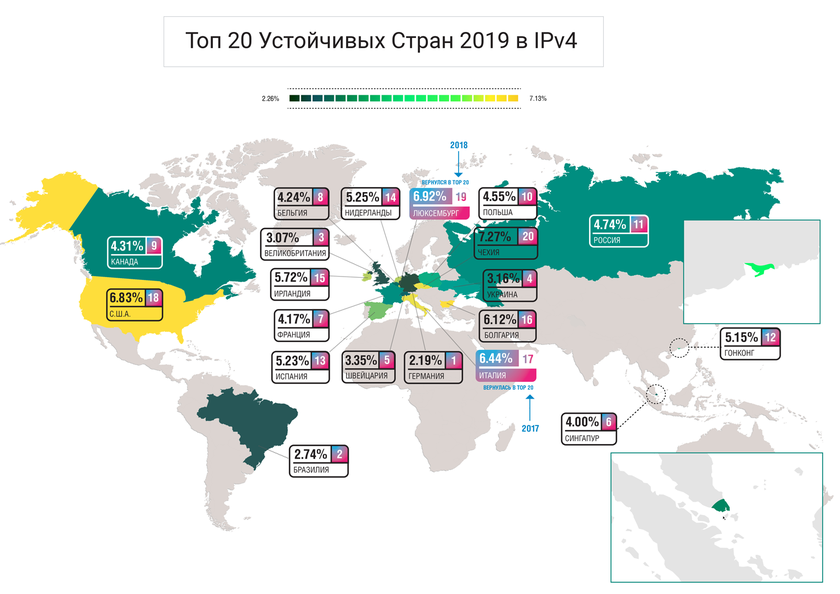 If in IPv4 any and only way to Tier-1 of provider is sufficient for maintenance of global connectivity, then in IPv6 it can be not so. Because of the continuing peer-to-peer wars between several providers of the top level in IPv6 they not all are connected with each other. If the network is connected only to one their party, it will not have full-fledged connectivity in IPv6. In other words, for ensuring complete connection and the highest reliability of a way to Tier-1 of operators should be present constantly.

Year of later, it is possible to note that IPv4 protocol still remains to much more reliable, than IPv6. The average share of the networks losing global availability at failure of one telecom operator makes 37.076% for IPv4 and 45.47% for IPv6. In comparison with 2018, the value of this indicator for IPv4 decreased by 0.924% that demonstrates positive dynamics.

On August 23, 2016 the worldwide network was 25 years old. This day the British scientist Timothy Berners-Li provided to the world of World Wide Web.

It should be noted what is considered a birthday of the Internet on August 6, 1991 when the first website was created. However only the staff of CERN laboratory had access to it, and on August 23 everyone got access to the WWW pages.

The prototype of the Internet appeared in 1969 as the project of Defense Advanced Research Projects Agency (DARPA). Then it was the network of four computers which could exchange data among themselves.

Berners-Li began work on WWW in 1989 and then created software for reading documents with hyperlinks and transition between them. Later the Mosaic company released the installer of the first browser for computers Apple Macintosh and Microsoft Windows that allowed to spread worldwide network.

Besides Berners-Li created the hypertext transfer protocol HTTP, a markup language of documents in HTML networks, determinant of location of the URL resource and a set of other developments in the field of IT. 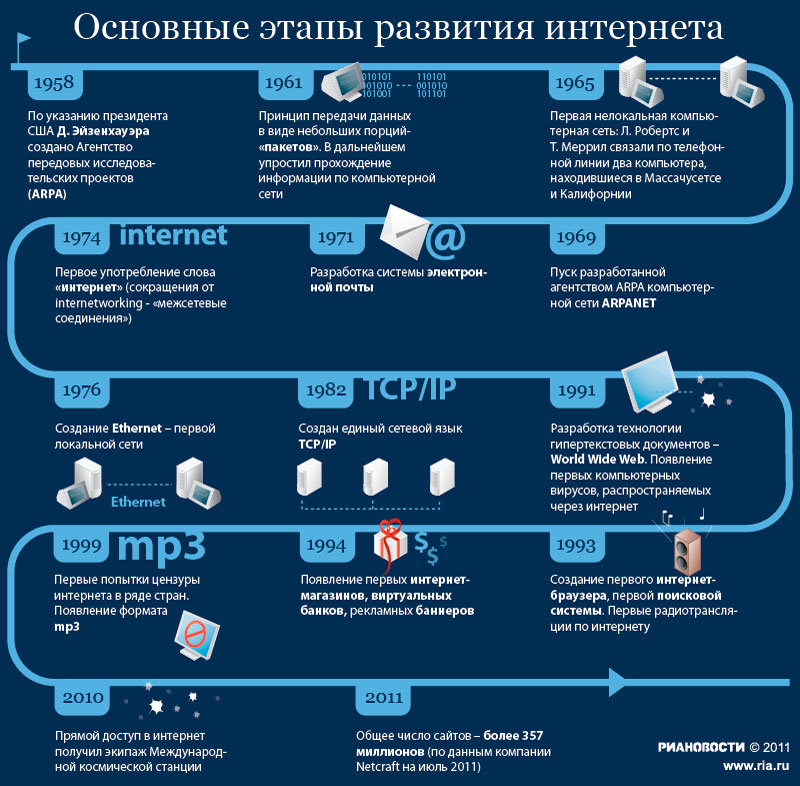 Mastertel company submitted in 2015 the educational film about development of technologies of communication. The audience learns about how data transmission technologies developed: beginning from signal fires of ancient people, the invention of telegraph and phone and finishing modern fiber-optical networks.

Authors of the movie showed what is modern communication networks as their construction is conducted and reliability is provided. Simply and visually opportunities and the basic principles of work of modern telecommunication network are presented in the movie and also the production process and laying of the optical cable is shown

Scenarios of development of the Internet

Основная статья: Evolution of the Internet during the period till 2025

Within the report of The Evolving Internet ("The growing Internet", August, 2010) specialists of Cisco and Monitor Group prepared four possible scenarios according to which development of the Internet will go. It agrees to one of them, the global network will continue to develop on a trajectory of fast expansion. Three other scenarios touch on different risks and issues which leaders of the Internet market should face, to the authorities of the different states and ordinary users.