On October 7, 2019 MIPT reported to TAdviser that his physicists showed a possibility of local management of Josephson whirlwinds. Opening can be demanded in superconducting devices of quantum electronics, in future quantum processors.

Illustration. The designer is Elena Havina, the press service of MIPT

Scientists from laboratory of the topological quantum phenomena in the superconducting systems of MIPT decided to apply a magnetic and power microscope (MCM) to studying of Josephson whirlwinds in a system from two superconducting contacts from niobium and a layer from copper (Nb/Cu/Nb) playing a role of loose coupling.


A variety of supersensitive superconducting devices, qubits and architecture for quantum computings quickly grows. It is expected that devices of superconducting quantum electronics will throw down a challenge to normal semiconductor devices in the near future. Josephson contacts are construction blocks of similar devices. 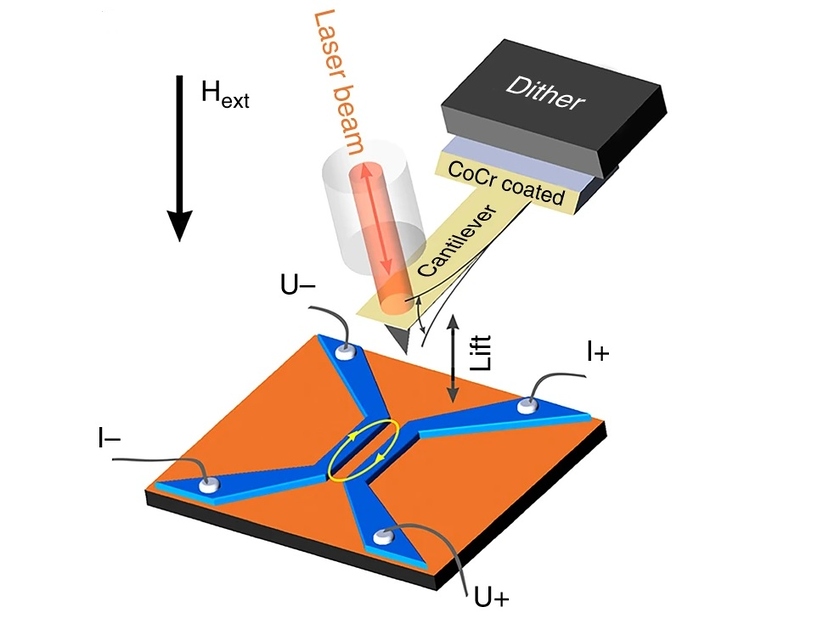 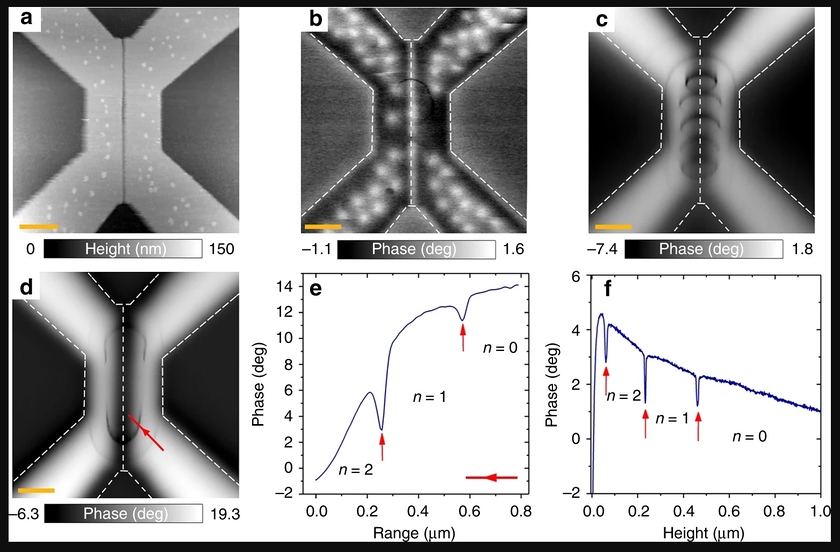 Figure 2. Detecting of Josephson whirlwinds. (a) — the topographical image of structure received using atomic and power microscopy. (b-c) — magnetic and power images of phase contrast (phase change of fluctuations of a kantilever was measured). (b) — the sample was cooled in an external magnetic field 90 E. Small separate white circles are Abrikosov's whirlwinds. (c) — magnetic field 90 E is attached after the sample was cooled in a zero external magnetic field. In the neighborhood of transition appeared several black rings which are sharp falling of a phase of fluctuation of a needle when it is in certain places. (d) — in a zero external magnetic field. Several rings showing influence of own magnetic field of a needle on structure are visible. (e) — distribution of a phase signal along the line shown by a red arrow on (d). Each falling of a phase defines borders between different configurations with different number of Josephson whirlwinds of n=0, 1, 2. (f) — dependence of oscillation phase of a needle on its height over a surface when the needle is over the center of structure.

Authors of work showed a method of remote generation, detecting and manipulation of Josephson whirlwinds in planar Josephson junctions using a low-temperature magnetic and power microscope.

At certain parameters (location of the probe, temperature, an external magnetic field, electric current through a sample) scientists observed a special response of a kantilever of a microscope. It was followed by emergence of sharp rings / arcs on images.

Researchers identified these features as the bifurcation points between the next Josephson statuses which are characterized by different number or provision of Josephson whirlwinds in transition. Process is followed by exchange of energy of a kantilever with a sample in points of bifurcation and shows that the magnetic and power microscope can provide unique information on a status of a whirlwind of Josephson.

It is expected that results of work will be an incitement for development of the authors of methods of local contactless diagnostics and control of modern superconducting devices and superconductor quantum electronics based on opening.