Operator of a mobile virtual network

At virtual mobile operators in Russia in 2019 became on 3 million subscribers in comparison with the 2018th. Data of TMT Consulting analytical company demonstrate to it.

According to the experts, by the end of 2019 in the Russian Federation there were nearly 10 million users of MVNO services. Concerning the 2018th the volume of this market grew by 40% whereas the number of users of all mobile services increased less than by 1%. 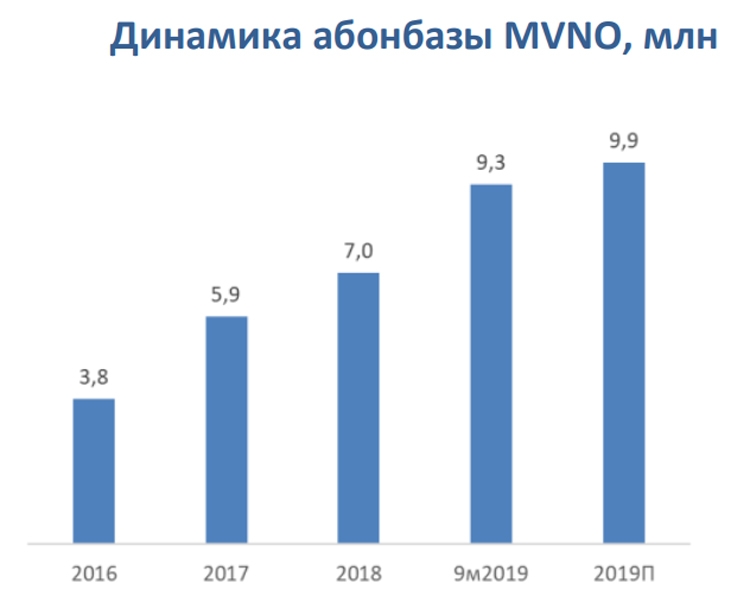 Dynamics of growth of number of subscribers of virtual operators in Russia, these ompaniya of TMT Consulting

In "TMT Consulting" counted that at the end of 2019 the Russian MVNO companies serviced nearly 4% of all mobile subscribers while in the countries of Europe and the USA the share of MVNO reaches 10-15%. So, according to the research McKinsey, in Germany virtual operators occupy 37% of mobile communications market, in Great Britain — 16%, in the USA — 13% (by the end of 2019).

Most of subscribers of MVNO in Russia are individuals, work of most of large players of this market is concentrated on them. As a result, dynamics and structure of the market in the B2C-segment are similar to indicators of all market of virtual operators: annual increment makes 45%, at the same time 80% of clients, on bank – 16% are the share of operator MVNO.

In a segment of corporate users of the market of MVNO of significant changes did not occur: Rostelecom servicing over a half of B2B of clients of virtual operators remains the largest player. Being the largest operator of fixed connection, the company has an opportunity to offer mobile services to own corporate clients and also new customers.

Services to business clients on the MVNO model are rendered also by other telecom operators specializing in B2B a segment however their subscriber base both in fixed, and in a mobile segment is, as a rule, small and is in most cases calculated by thousands of clients.[1]

2018: The market of virtual mobile operators grows at the expense of dissatisfied subscribers

In Russia, according to "TMT of consulting", From 2015 to 2017 the number of subscribers of MVNO grew up more, than twice: from 2.5 million to 5.8 million clients also made a little more than 2% of the general subscriber base. And according to forecasts, by the end of 2018 of MVNO will contain 7 million connections.

As experts consider, this growth, first of all, is connected with the fact that operators of MVNO place emphasis on overcoming dissatisfaction of consumers. Often the medium-sized and small companies which have sufficient flexibility are guided by it to provide target and relevant offers for the solution of specific needs of clients. It can be not only the competitive price and simplicity of the offer, but also complex service of the subscriber on all necessary services.

Thus, MVNO work with narrow client niches which are not too interesting to basic mobile operators because of the high cost of attraction.

Besides, experts note projects when MVNO is initially created for support of a certain business or financial undertaking, whether it be the banking sector as, for example, "We will talk" (the operator of Sberbank) and "Tinkoff of Mobile". In this case MVNO becomes one more method of strengthening of loyalty and at the same time additional factor of monetization of the customer base.

One more factor expanding reserves of growth of MVNO, analysts call ensuring convergence of services as borders between the fixed, broadband and mobile communication become more and more indistinct.


Drivers of the market

By estimates of specialists, the market potential of MVNO is high. According to forecasts, by 2022 the share of MVNO in Russia will grow by 7 times – to 14–15%. Despite it, many companies still show restraint in development of it the direction, carefully analyzing both positive experience, and unsuccessful experiments of other operators. Besides, the factors capable to affect market situation are studied.


2017: The Ministry of Telecom and Mass Communications optimizes work of virtual telecom operators

On August 16, 2017 the Ministry of Telecom and Mass Communications of the Russian Federation announced preparation of the draft of the order directed to improvement of requirements to communication services provision when using a business model of virtual networks of mobile communication (Mobile Virtual Network Operator, MVNO). The document already underwent the procedure of public discussion on the Federal portal of projects of regulatory legal acts.

The draft of the order is designed to settle use of codes of a mobile network (Mobile Network Code, MNC). Now for identification of virtual operators in public communication networks of the Russian Federation the unique MNC codes issued to mobile operators can be used.

According to department, as of August, 2017 Roskomnadzor granted 85 licenses for communication services provision on the MVNO model.

Despite rather old term of legalization of the Russian market of virtual operators (MVNO), since 2009 it is characterized very weak in comparison with the levels of development developed by the countries, low growth rates and instability which amplifies in the period of economic instability. On analysis results more than 50 projects (more than 20 acting and being at high readiness to start) can be selected the following trends[4]:

The main perspectives of market development of MVNO in Russia are connected with development of projects in the field of B2B and B2G and also with such directions as M2M and Internet of Things (IoT). In particular, the trend of gain of activity from telecom operators subordinated to large holdings (Gazprom, Transneft) to start of own MVNO of a full stroke with perspective of tinning of staff of the companies and members of their families is observed and also for use in industry technology processes within the concept of M2M/IoT (data of J'son & Partners Consulting).

According to J'son & Partners Consulting, by the end of 2015 in Russia there were about 2.2 million subscribers of MVNO that makes no more than 1% of the number of active SIM cards of mobile communication. This indicator approximately corresponds to the level of developing countries of Latin America and Eastern Europe and demonstrates that the market of MVNO in Russia still is in the earliest stage of the development. According to forecasts of J'son & Partners Consulting (the basic scenario), Mvnosostavit share by 2020 about 2% (5 million).

The pacing restraining factors of market development of Mvnosvyazany with disinterest of large mobile operators ("the big three") in gain of the competition in the conditions of the actual lack of regulatory pressure. As a result, potential independent MVNOV of Russia difficult and most often can just not agree with mobile operators about providing in lease of cellular infrastructure. One more brake is the unavailability of a regulatory framework. In particular, conditions for activity of MVNA – aggregators which could mediate small virtual operators in commercial agreements with mobile operators for obtaining more advantageous conditions due to scale effect legislatively are not defined. For large MVNO of "full stroke" (Full MVNO) development restrains need of high capital costs in the conditions of complexity of implementation of model of sharing of infrastructure.

The analysis of the MVNO projects existing, being at the different stages of implementation in Russia planned closed and the "frozen" projects showed that the most "viable" MVNO are the projects started by telecommunication companies in groups (MTS, MegaFon).

The largest MVNO in Russia is Yota with a subscriber base about 1.7 million for the end of 2015 and a market share of 78% on number of subscribers. MGTS, SIM-SIM, Matrix Mobile and Aiva Mobile treat other large projects "Hallo Incognito": 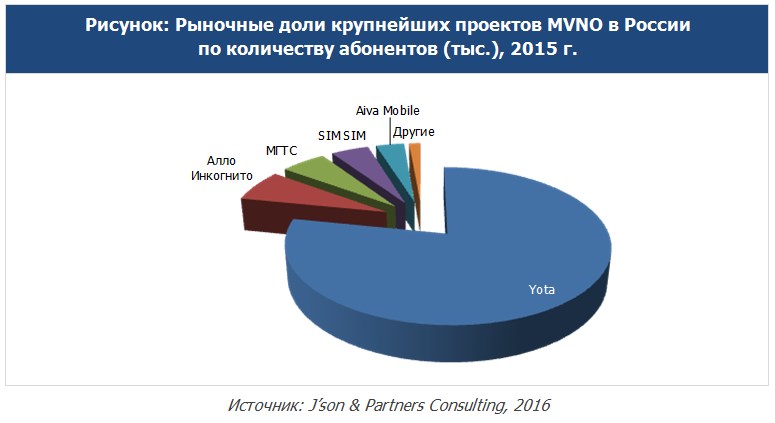 Characteristic of the Russian market of MVNO from the point of view of target audience is the absence of operators discounters (the niche is busy with Tele2) and the niche MVNO focused on different social and age groupes (the niche is occupied with mobile operators).

Mikhail Bykovsky, the associate director of department of regulation of radio frequencies and communication networks of the Ministry of Telecom and Mass Communications, explained in May, 2014 that virtual operators, depending on scale and a class of assigned tasks, sell different business models in the market. If the company itself organizes marketing and sales, performs billing and tariffing, direct service and support of subscribers, independently provides them services, is responsible for interoperator interaction and traffic management, but has no cellular network (base stations and the appropriate frequency resource), then this company is a full-fledged virtual operator, and its business model is called Full MVNO. If traffic management and interoperator interaction are excluded from the listed feature set, then it is already facilitated business model of the virtual operator, or Light MVNO. Two other models where the functionality of operators is even less, Second Brand are called and Branded Reseller[5].

"Even taking into account MVNO affiliated about a host operators and subbrands of mobile operators, the subscriber base of virtual operators in Russia does not exceed 1% of number of active SIM cards. The market of MVNO in Russia still is in the earliest stage of the development" — Vasilyev Evgeny, the CEO of MTT Group company said.

In Russia where, according to him, there are practically no obstacles of non-economic character for development of MVNO, about 100 corresponding licenses are issued already, but actually operating activities are conducted by only 10 companies. Among them there are Yota, WhyFly, "Svyaznoy of Mobile", etc. Their cumulative customer base makes about 2.4 million subscribers. And if to exclude the Yota company which is very conditionally brought in it from this list, then achievements of the Russian MVNO will be absolutely modest. Experts state several reasons of such provision. It is the high level of the competition between the main players of mobile communications market — operators of "the big three". They do not want to share the subscribers with virtual operators though are ready to shift to them problems of increase in volume of traffic in the networks. One more barrier — very low cost (in comparison with Europe) services of a voice communication and mobile broadband access that complicates emergence in the market of MVNO discounters. At last, the chief mobile operators of Russia actively play practically in all segments of the market, depriving of competitors of chances of development even in narrow niches.

By estimates of iKS-Consulting (February, 2011), in Russia about 15 virtual operators act, including:

By estimates of the analyst of iKS-Consulting Maxim Savvatin, everything together they service about 600,000 subscribers (without the project of MegaFon "Just for communication"). But it is impossible to call these companies full-fledged virtual operators — they have no licenses for rendering mobile services and own number capacity and act as agents rather, Savvatin tells.