In 2019 the volume of the world market of portable monitors was 320 thousand pieces, writes the DigiTimes portal with reference to industry sources.

They do not call dynamics and only speak about the growing demand for such equipment. Understand as portable monitors not only small devices with screens on 5-13 inches, but also quite large (14-18 inches) if their construction is easy and optimized for frequent transportation. Besides, such models are distinguished by a low-voltage power supply (5 and/or 12 Volts). Portable monitors take with themselves in trips and also are installed in cars by producers of the last. 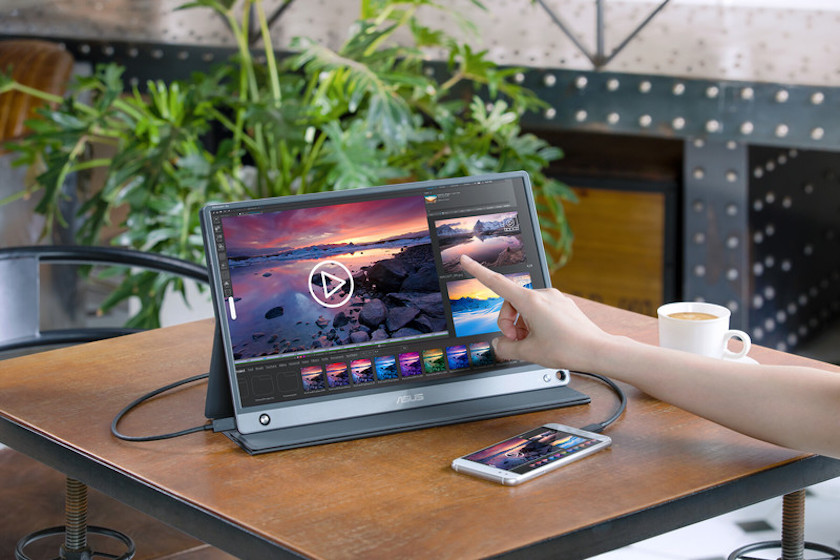 The volume of the world market of portable monitors was 320 thousand pieces, writes the DigiTimes portal with reference to industry sources

The largest producer of portable monitors at the end of 2019 calls Asus company which share made 65%. Afterwards with big lag HP Inc was located . with 16 percent result.

Brands of Acer, AOC and Lenovo of which 3-4% of supplies of equipment in a segment were the share also got to the leading five.

According to interlocutors of the portal, using the competitive solutions in the field of accumulators and touch displays, Asus manages to offer inexpensive monitors (retail cost is from $149 to $349), thanks to what the Taiwanese company saves leadership and, most likely, will remain on the first place further.

In the publication it is said that strengthening of positions of Asus in the considered market is promoted by orders from delivery to the equipment to one of the German car makers and also start of new models of game devices. It is expected that in 2020 Asus will produce in total more than 300 thousand portable monitors.

Against the background of the growing demand for portable monitors more and more producers try to work at this market actively. So, Acer, AOC, Lenovo and Microstar International (MSI) companies try to impose fight to leaders.[1]

The volume of the world market of computer monitors in 2019 reached 125.2 million pieces, having increased by 1.5% in comparison with previous year. Analysts of IDC report about it.

According to them, increase in demand for monitors, as well as for computers, was promoted by transition of the companies with operating system Windows 7 on Windows 10. One more driver of growth became a segment of the gaming equipment at the expense of which sales of consumer monitors increased that was not since 2010. 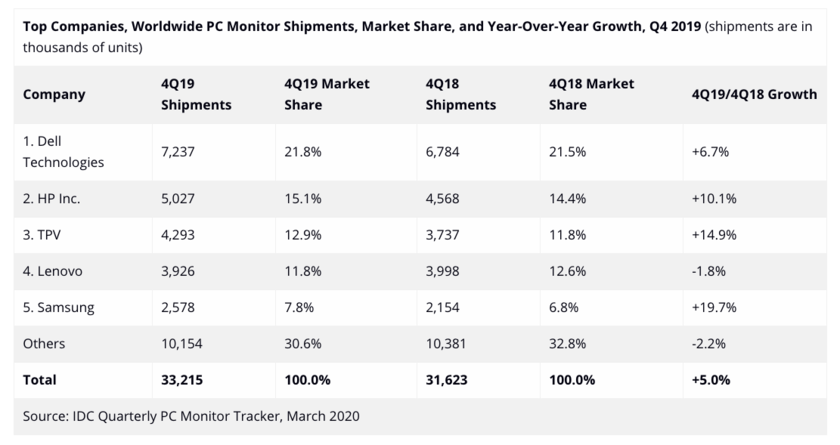 In a research it is also noted that in 2019 for the first time during all the time monitors with 23.8-inch displays outstripped on sales 21.5-inch models what was promoted efforts of producers of panels and ready devices which focused on larger products.

Companies Dell, HP Inc are called leaders of global market of monitors . and TPV on which nearly a half of supplies of equipment at the end of 2019 was necessary.

According to analysts, in the market of PCs monitors a number of problems on which solution some time will leave is expected. In particular, as transition of corporate clients to Windows 10, generally came to the end, demand from this segment will slow down after two-year growth.

Besides, deterioration in an environment is expected in connection with COVID-19 coronavirus effects, such as shortage of components, deficit of labor power and failures in logistics. Events in China will continue is destructive to influence all supply chain of monitors. Such situation will probably remain during all first half of 2020. Besides, demand in China and other regions will be suppressed. The situation will a little improve in the second half of the year, and recovery is predicted not earlier than 2021.

As the coronavirus strongly limits sales of monitors and other electronics in retail stores, analysts of IDC advise producers to review the strategy for the online sales channel.[2]

In 2018 the volume of the world market of computer monitors was 122.8 million pieces, having increased by 1.6% concerning deliveries of year prescription to 120.8 million units. The data of IDC published on March 29, 2019 demonstrate to it.

According to experts, sales of monitors grew for four quarters in a row, but in October-December, 2018 they decreased by 2.1%. At the same time in nine countries leading on sale of monitors cumulative growth by 4.7% took place. The Chinese market (world's largest) and Indian (fifth in value) fell in the amount for 10.3%.

According to the results of all 2019 of shipment of monitors will be reduced by 2.7% (to 118 million pieces), and in the 2020th the release of the equipment will decrease to 114 million units because of further distribution of cheap mobile devices, researchers predict.

The vice president for researches in division of IDC Devices & Displays Linn Huang says that the Indian market will be quicker recovered, than it was expected, considering that excessively large supplies of stale goods were the main problem for it. In China the remaining weak macroeconomic trends will leave the declining demand in the market of monitors, the expert considers. 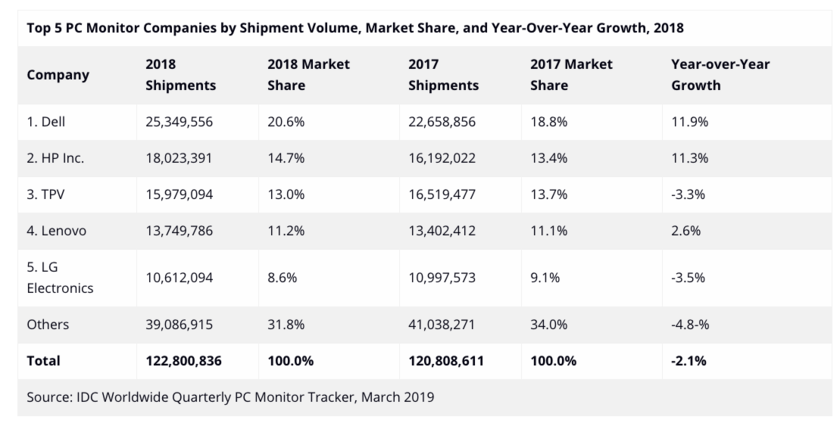 The largest producers of monitors, data of IDC

The list of the world's largest producers of monitors in 2018 did not undergo serious changes concerning the 2017th. Not just remained Dell on the first place, but also strengthened the position. Rose by the second position HP Inc. which managed to outstrip TPV.

2014: Samsung bypassed HP in the market of monitors

On March 31, 2015 analysts of IDC published results of a research of the market of computer monitors for 2014. Demand for these products was on a global scale lower, than experts expected.[4]

In 2014 producers shipped 133.6 million monitors against 137.2 million pieces worldwide the previous year. In October-December, 2014 about 34 million devices were produced that is 4.4% less year on year. Specialists predicted decline of shipments by 3.1%.

Global market of PCs monitors sank in volume despite high sales of consumer models at the end of 2014 and also beneficial effect of the stopped official support of Windows XP OS which promoted bulk update of the computer equipment in consumer and corporate segments, the analyst of IDC Phuong Hang notes.

In the research report it is also said that almost all monitors in the market are equipped with LED illumination. It was present in 97.6% of the devices delivered by vendors in the fourth quarter 2014 that on 7.9 percent points exceeds an indicator of year prescription.

Devices with 21-inch screens were the most popular segment in terms of a standard size in 2013 and 2014. According to the results of the last three months 2014 the share of such models in the total amount of the market grew to 22.5%. Also experts note the growing popularity of products with the built-in television tuners: extent of their penetration rose up to 5.8% in 2014, and in the 2015th increase in this share indicator up to 6.5% is expected. Almost all monitors with TV-tuners (99% in 2014) put Samsung and LG on the market.

The largest producer of computer monitors in the world is Dell which in the fourth quarter of 2014 increased deliveries of products almost in all regions, except Japan and Latin America.

The largest producers of monitors, data of IDC for the fourth quarter 2014

Samsung climbed up the second place. The growing demand for devices of the South Korean giant was observed in all regions, key for it, including in Asia-Pacific (excepting Japan), Western, Central and Eastern Europe. Fell by the third place HP, it is followed by Lenovo and LG (see the table above).

For the first quarter of this year in the world 29.5 million computer monitors were implemented that is 12% less, than in the first quarter than last year and 1.5% less, than analysts predicted. Despite separate positive changes — in Japan, for example, after four in a row quarters of sales reduction rose by 2% — analysts believe that in the nearest future the trend of reduction of sales will remain. Some revival of demand can be expected later when on consumer market and also in segments of small and medium business there are new models of monitors. On the second quarter of analytics of IDC predict sales reduction for 3.4% in comparison with last year to 28.8 million monitors. In a year in general in the world about 120 million monitors will be sold, and by 2019 sales will decrease to 104 million a year.

LED illumination, and a format — the wide screen with diagonal 21.5 inches remains the most popular technology for monitors.