Samsung outstripped Apple in the market of mobile processors

The three of the world's largest producers of processors for smartphones in 2019 underwent changes: Samsung outstripped Apple and climbed up the third position in rating. Data of Counterpoint Research analytical company demonstrate to it.

According to experts, in 2019 14.1% of global market of mobile processors were the share of Samsung and its chipsets Exynos that on 2.2 percent points it is more, than the previous year. The share of Apple was during this time reduced by 0.5% and made 13.1%. 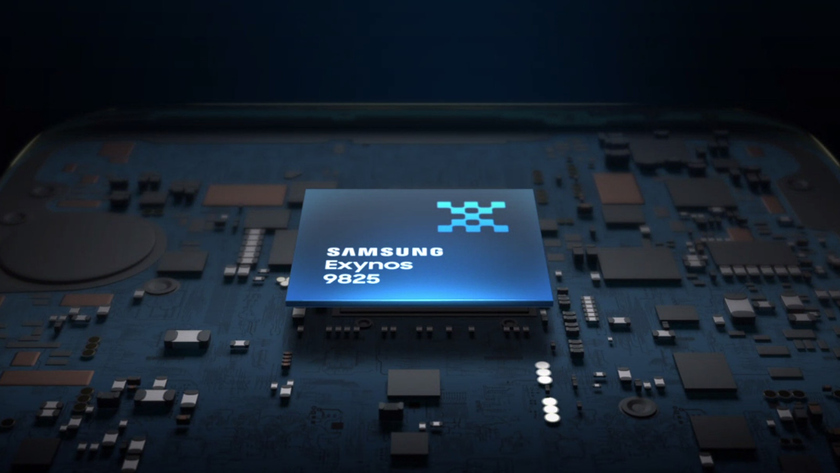 Samsung came to the third place on sales of mobile processors

Strengthening of positions of Samsung in the considered market of analytics was connected with growth of semiconductor business of the company in North America and India.

Qualcomm which wrote about 33.4% of sales of such chips in an asset remained the largest producer of the single-crystal systems for smartphones in 2019. MediaTek with 24.6 percent result was at the second place.

The largest producers of mobile processors given to Counterpoint

In the leading five only Samsung and Huawei  could increase the market shares. Analysts did not specify the amount of all market in 2019 and only noted that there was growth.

Counterpoint Research assumes that the situation in the market of mobile processors in 2020 can exchange, considering that Samsung decided to use more MediaTek processors in models of smartphones of the lower and average levels, and OnePlus, the old client of Qualcomm, selected MediaTek Dimensity chipsets for the OnePlus 8 Lite model. 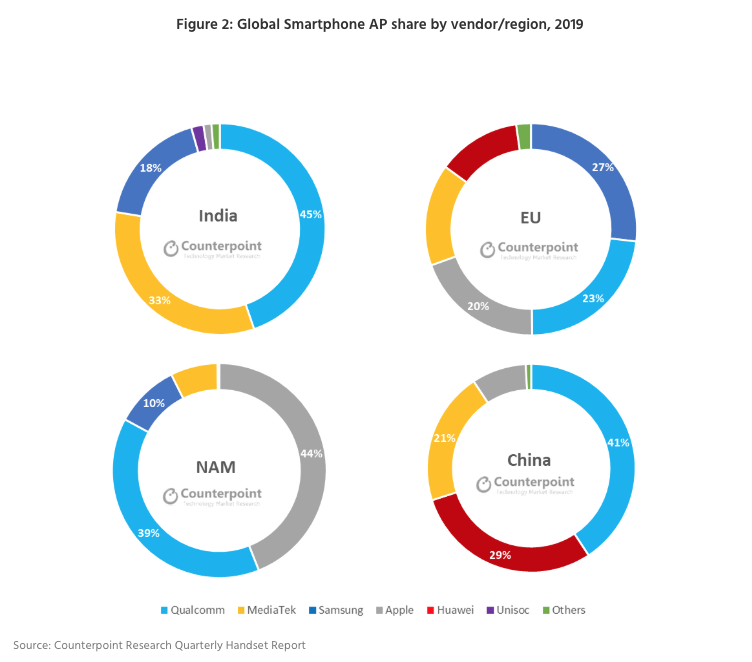 Shares producers in the markets of mobile processors in different regions, data of Counterpoint

One more factor capable to affect condition of producers in the leading group is connected with the fact that Samsung made the decision to refuse development of own cores for mobile platforms of Exynos and to use normal cores of ARM according to the license. At the same time Samsung began cooperation with AMD, being going to license graphic IP cores of the last for use in own single-crystal systems for mobile devices.[1]

The gloomy future without uniform gleam is promised to microprocessors

The scenario according to which transition to regulations of release of semiconductors with nodes about 1 nanometer will take not less than a decade is not excluded, however there is also more gloomy probability that development of technologies will stumble already on regulations of 3 nanometers due to the lack of suitable materials for production of photoresist, reported the EE Times portal with reference to results of a panel discussion of specialists within the annual conference on problems of a lithograph of SPIE Advanced Lithography 2019.

Initially participants of a session were going to note the fact of "death" of the Law of Moore (Moore’s Law) predicted earlier on which the number of transistors on a crystal of the chip doubles each 24 months. However according to the results of a meeting its participants noted the concern growing in the industry concerning uncertainty with production technologies of the next generations of the chips tied, in turn, on the growing number of unresolved technology problems.

According to Harry Levinson (Harry Levinson), the specialist in a lithograph of AMD and GlobalFoundries with more than 30-year experience, not far off the moment of "death" of a semiconductor lithograph.

"We make progress, however at extrapolation to the sizes less than diameter of atom of silicon to technologies of detailing using a lithograph will come the end, - he said. (Radius of atom of silicon is 111 pm – a comment of CNews).

Technology problems of the semiconductor industry

Photoresist represents a kind of photosensitive polymers which in the course of production of chips are applied on a silicon plate. Further photoresist exposure by lithographic system through windows of photo masks, with subsequent "etching" of tracks on a silicon crystal is made.

In "traditional" technical processes laser machines with the wavelength of 248 nanometers or 193 nanometers – in so-called "to a zone deep ultra-violet" a range (Deep UV) which borders on the frequency range perceived by a human eye were used: from conditional "violet" border of 380 nanometers to "red" border of 780 nanometers.

In a combination to special phase-shifting photo masks and immersion technology (immersion in liquid), such photoresist allowed to create nodes of chips to 14 nanometers

Transition to use of the exposing installations with lasers of range of EUV ("extreme", or "tough" ultraviolet) with the wavelength of 13.5 nanometers (a boundary region with x-ray emission) facilitated process of exposure of photoresist, however took nearly two decades. In addition, at regulations of 10 nanometers some other characteristics of photoresist – heterogeneity, photosensitivity, etc. also became less critical.

When mastering more precision technology regulations – from 5 nanometers and less, the sizes of nodes of chips become comparable in about tens and even in units of diameters of atoms of silicon. Transition to "atomic" regulations of technical process enters physical restraints which to solve using a lithograph and modern photomasks it is impossible.

2018: Apple completely refused chips of Qualcomm for iPhone for benefit of products of Intel

On July 25, 2018 it became known that Apple decided to refuse completely chips of Qualcomm in the smartphones for benefit of products of Intel. It is about so-called baseband-modems which are used for connection of mobile devices to cellular networks. Read more here.

Intel showed a weak gain of a market share of processors for the PC in the third quarter 2011. Results of AMD were much more dynamic, but despite it the company plans carrying out expensive restructuring at the beginning of 2012.

In the third quarter 2011 the Intel company received 80.2% of the general share of deliveries of the world market, having shown a gain of 0.9% in comparison with the second quarter. Provided to AMD in this period 19.7%, having lost 0.7% in comparison with 2Q11. VIA Technologies earned 0.1% at the corresponding losses in 0.2%.

Results of the third quarter on categories of form factors: Intel provided a share in 82.3% of a segment of mobile processors, having lost 2.1%, completed AMD quarter from shares of 17.6% and a gain of 2.4%, and VIA managed to receive 0.1% of this market.

Income of the world industry of computer chips in the third quarter showed strong indications of revival, having risen by 16.1% in comparison with the same period of 2010 and reached a point of $10.7 billion that is 12.2% higher than values of the last quarter, the IDC analytical company reports.

The closest rivals in the market, Intel and AMD, in the third quarter felt enthusiasm and recessions. For example, showed to AMD excellent results in the market of devices of mobile communication while Intel got advantage in sales of chips to servers.

The analyst of IDC Shane Rau, noted growth of average selling price of PCs processors for OEM manufacturing in the statement more than for 5% in the third quarter 2011, having emphasized: the price grew eight quarters in a row. "It is obvious that the amount of microprocessors with the integrated graphic processor Sandy Bridge from Intel and Fusion from AMD, grows in product lines of each of the companies and causes growth of the price", - he told.

As reported IDC, chips with the integrated graphics occupied up to 73% of amount of the total number of processors for the PCs delivered by the companies last quarter. Analysts draw a conclusion that for Intel of matter in this period went well, also showed to AMD small growth.

Intel reached a scope of 80.2% of the world market of processors for the PC. A gain small - 0.9% in comparison with the second quarter 2011. At the same time showed to AMD losses in the amount of 0.7% in the period of the second and third quarters, having come as a result to a market share of 19.7%.

However when analysts investigated a segment of the market of chips for mobile PCs, it became clear that the AMD company showed powerful rise while Intel did not shine with results. As a result of AMD received growth of revenue in 2.4% and took 17.6% of a market share. For comparison, Intel sank for 2.1%, still dominating from market shares of 82.3%.

As for the market of servers/workstations, here Intel dominates, having received an enormous share in 95.1% at a small quarter gain in 0.6%. AMD lowered an indicator by 0.6% and completed quarter from shares of 4.9%. Nevertheless, the company fought in the sector of the market of desktop PCs, having held 24.1% of the market and having shown losses in the amount of 4.8% while Intel received the corresponding 4.8% and saved 75.8% of the market.

Some of these digits will be approved with the report of Mercury Research company, published at the beginning of a week. In it it is also noted that the volume of world deliveries of chips increased. However Mercury Research announced capture of a share of the world market by AMD company at Intel.

Implementing plans of cost reduction of AMD is going to dismiss 10% of the employees worldwide and to stop "the existing contract commitments" what the company announced on Thursday. It is said in the statement of the president of the company Rory Read that cost reduction and "focusing" of the staff of the company on key aspects of its activity will increase competitiveness of AMD.

According to the restructuring plan including dismissals, economy of the company next year should make $200 million in operating expenses, AMD reports. The company assumes to use the most part of this money for financing of strategy of AMD for decrease in energy consumption, market development and "cloud", the statement says.

Dismissal will affect the staff of all divisions of the company in the world and, as expected, there will be it in the first quarter 2012.

AMD plans that restructuring will be costly: in the fourth quarter the company expects expenses in this respect in the amount of $101 million and in addition $4 million - next year.

Recently AMD had problems since that moment as her production partner - GlobalFoundries brought out of structure of AMD in 2009 experienced difficulties in a production process for AMD microprocessors of new type. Difficulties resulted in deficit of Fusion chips and affected revenues of the company in the third quarter.