In the middle of August, 2020 the Taiwan firm Brain Navi provided the new robot who independently takes dabs from a nose. Developers hope that thanks to this robot medical institutions will be able to hold expanded testing on the COVID-19 activator, at the same time reducing risk of its further distribution. Read more here.

In MFC robots for diagnostics of health appeared

At the beginning of August, 2020 at 10 offices "My Documents" in Moscow robots for preliminary diagnostics of health started working. To visitors suggest to define structure of a body, to check the blood saturation level oxygen, to make the analysis of an expiratory air, to measure arterial blood pressure and pulse. Read more here.

At the beginning of June, 2020 the Danish researchers provided completely automated robot who can take dabs from a mouth for the analysis on COVID-19 coronavirus without participation of the person. It is supposed that such robot will be able to reduce risk of infection of medical specialists. Read more here.

At the end of April, 2020 Bright Machines in cooperation with Tel Aviv Sourasky Medical Center hospital (Ichilov) and also iCobots company provided the robot who will be able to do tests for COVID-19 coronavirus practically without participation of people. Innovation began to be used in the Israeli medical center. Read more here.

The announcement of the robot for disinfection of premises in Russia

On April 20, 2020 it became known of creation of the robot by Aurora Robotiks company capable to carry out disinfection of premises. The invention will be especially relevant in propagation conditions of a koronavirusny infection of COVID-19. Read more here.

In the middle of April, 2020 it became known that the Texas hospitals began to buy the Moxi robots made by Diligent Robotics to help nurses. Read more here.

In February, 2020 it became known of emergence in hospitals of the robot who without serious consequences takes blood from a vein. It was created at the University of G. Rutgers.

The robot intended for taking and the analysis of tests of blood showed the results comparable to data of normal medics or even exceeding them. The device provides fast result and will allow specialists to focus on other tasks. 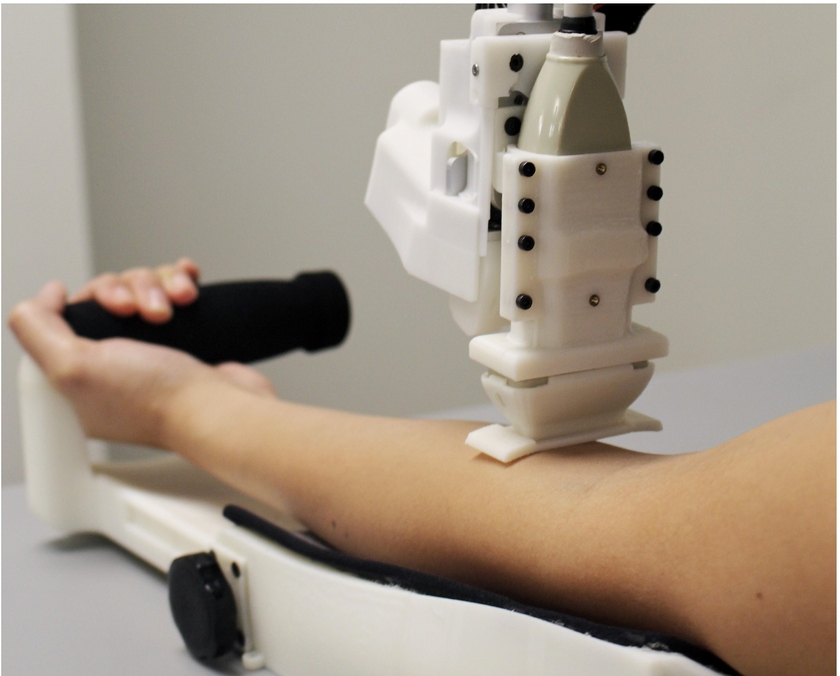 Results were comparable to clinical standards. The general indicator of successful manipulations was 87% for 31 patients. Among 25 people with readily available veins the same indicator reached 97%. After testing robots began to be used in actual practice in hospitals in New Jersey (USA).

The device includes the manipulator with ultrasonic examination which takes blood from veins and also the module for processing of samples and the blood analyzer on the basis of the centrifuge. The device can be used at a bed of the patient and in ambulance cars, departments of emergency aid, clinics and hospitals.

Venepunktion who includes introduction of a needle to a vein for taking of a blood sample or performing intravenous therapy is the clinical procedure, most widespread in the world. But the venepunktion can be complicated, and medics fail during the work with patients without the seen or palpated veins. Repeated unsuccessful attempts of a venepunktion increase the probability of phlebitis, thrombosis and infections.

The new device allows quickly, safely and reliably to receive blood samples, preventing unnecessary complications and reducing painful feelings at patients. The device can be used in such procedures as an intravenous kateterization, the central venous access and dialysis. Researchers intend to improve the device to take samples from patients with hardly accessible veins.[1]

At the end of March, 2020 researchers of one of leading universities of China developed the robot who will be able to examine the patients infected with a coronavirus in the absence of the doctor. Read more here.

In the middle of March, 2020 in "smart" field hospital of the Chinese city of Wuhan which turned into epicenter of a koronavirusny infection robots began to be used. They remove vital signs, deliver drugs, disinfect organization and entertain patients who got to a quarantine. Read more here.

At the end of January, 2020 there was video on which the robot under the name Little Peanut is depicted - he delivers food to the people who appeared in a quarantine because of risk of infection with a coronavirus.

Passengers of run Singapore-Hangzhou (China) contain in a quarantine after the increased temperature was detected in two of 335 people in the airplane. On video shot in the Hangzhou hotel where there are in a quarantine potentially infectious passengers it is shown how the little robot carries food by numbers. 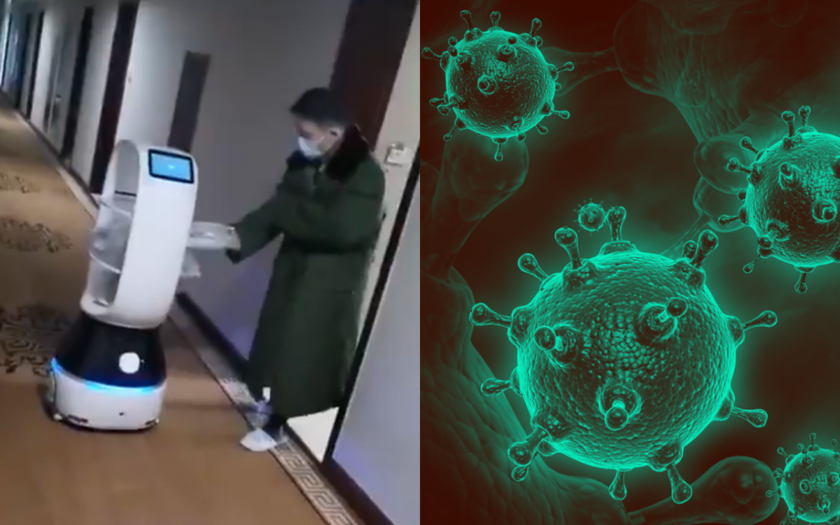 According to messages of Reuters, on each floor of 16-storey hotel several robots were used for decrease in contacts and prevention of spread of a new coronavirus 2019-nCoV. Passengers should nakhodisya in a quarantine not less than 14 days, all this time the hotel staff will be helped by robots. As of morning on January 30 the new virus became a cause of death of 170 people and infected 7814 people around the world. Mortality is 3% (normal flu — less than 0.01%, SARS — 10%).

Still vast majority of cases is observed to the Provinces of Hubei (city of Wuhan). However the coronavirus already got out of borders of continental China into Australia, Cambodia, Canada, France, Germany, Ivory Coast, Japan, Malaysia, Nepal, Singapore, South Korea, Sri Lanka, Taiwan, Thailand, the USA and Vietnam. On January 23 the Chinese authorities blocked Wuhan, and several airlines suspended flights to continental China in attempt to prevent spread of a virus. The foreign citizens evacuated from Ukhani are located in the quarantine centers.[2]

Hospitals began to use robotic thread which cleans brain vessels

At the end of August, 2019 it became known that hospitals began to use the magnetomanaged threadlike robot who is capable to slide actively on narrow twisting vessels. The robotic thread developed by the Massachusetts Institute of Technology (MIT) integrates with the existing endovascular technologies and allows doctors to direct far off the robot on brain vessels for fast treatment of such defeats as aneurysms and strokes. Read more here.

On June 17, 2019 the Perm company Promobot  announced creation of the robot doctor capable to make recommendations. According to developers, the robot has enough information minimum for  impartial recommendations, and in the future his opportunities will be significantly expanded. Read more here.

On April 16, 2020 the Ministry of digital development, communication and mass communications of the Russian Federation together with the National Association of Participants of the Market of Robotics (NAPMR) prepared a research about the perspective directions of application of robotics in business. Special attention was paid to use of robotics in such spheres as the processing and mining industry, agriculture, logistics, provision of services, a cleaning and others.

Use in Russia of robots happens in the medical centers more slowly, than in the world. As of April, 2020 in the country several Da Vinci robots surgeons and also the separate Aesculap Einstein Vision 2.0 systems (Germany) are installed. Read more here.

At the beginning of 2018 it became known of use of robots as nurses. The project is announced in city hospital Nagoya (Japan) in which there is a big museum devoted to robotics.

In February, 2018 in University clinic of Nagoya (Nagoya University Hospital) will start four Toyota robots who will become assistants to medical personnel. In particular, will assign functions of distribution of medicines by the patient in chambers to this automated equipment, delivery of analyses, etc. Robots will be able to move both on the floor, and between different departments which are located on different floors. 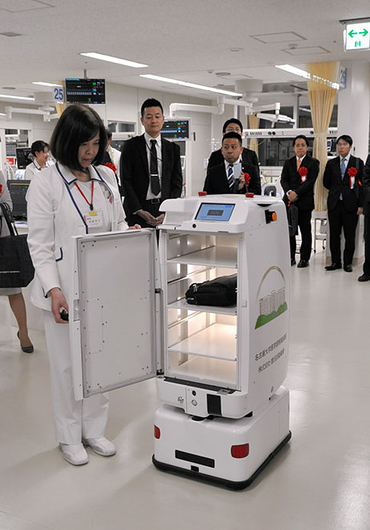 The robot nurse in University clinic of Nagoya

As notes the Engadget edition, in fact, robots are the 90 liters portable refrigerators which are equipped with radars and cameras for movement on medical institution. Robots go round people, and in case of collision apologize and politely ask to pass. Employees of clinic can summon robots and to appoint following points by means of tablet computers.


Robots are developed by joint efforts of specialists of University clinic of Nagoya and division of Toyota Industries (makes auto parts and electronics). Trial start of devices will take place during a night shift - during the period from 5 p.m. till 8 a.m. when less people go on floors. In case of successful testing robots can be deployed in other hospitals.[3]

Use of robots in nursing homes in Japan

In November, 2017 it became known of testing of robots in several thousand nursing homes in Japan. The artificial intelligence and mechanical assistants help personnel to look after aged people and replace with the last interlocutors.

According to forecasts of the Japanese government, the size of the market of the robots replacing health workers for patient care by 2020 will reach 54.3 billion yens (about $480 million), having tripled in comparison with an indicator of the 2015th. Expenses are much lower in comparison with the robots used at the enterprises and in the field of services here. 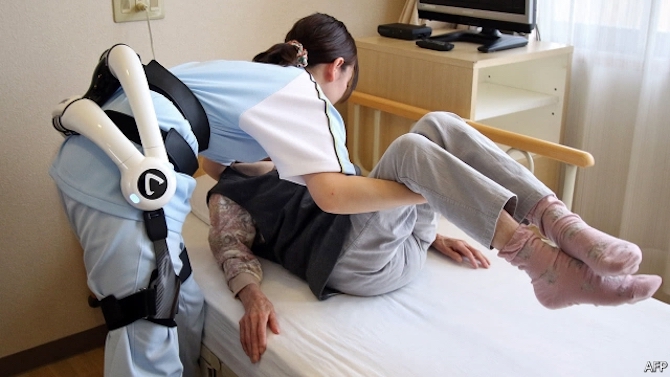 The employee of nursing home helps the sick patient, using a robotic system

One of the reasons of such lag of demand for the automated equipment which is looking after human health is the high cost. Despite rather high level of life in Japan, not all pensioners are able to afford purchase of the robot.

In Japan subsidies for developers of robots are provided. Additional benefits are provided by deliveries of devices to the medical and rehabilitation centers for aged and disabled people. About 5 thousand such organizations by November, 2017 involve robots.

They are used for communication with patients, carrying out physiotherapy exercises, a bypass of hospital corridors for monitoring of emergency situations, and the Aibo robot dog from  Sony replaces a pet at all.

In nursing homes systems helping medical staff to look after elderly people extend more and stronger: for example, to lift and move paralyzed on the floor.

Robots will not be able to replace completely people in social organizations yet, however allow personnel to focus on the communication and other tasks requiring bigger involvement, having given household affairs on care of gadgets. Besides, as showed a national research, about a third of the residents of Japan using robots as a result of steel more active and independent, notes the The Economist edition.[4]

The forecast of IDC for use of robots in medicine

By 2020 hospitals will become more active to use robots. Both clinical application, and automation with their help of simple tasks is planned, reports the Healthcare IT News edition with reference to the research IDC conducted in 2017.[5] 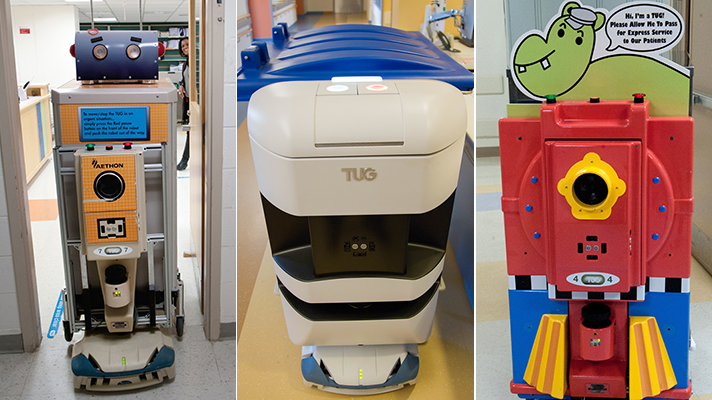 Poll of IDC among medical institutions of the USA on 200 and more beds allowed to estimate plans of implementation of robots and drones. Nearly a third of respondents said that they already use at themselves robots. Such practice will become an everyday occurrence for health facilities as soon as in hospitals and clinics understand how implementation of robots is capable to help to automate processes, to lower costs and to improve quality of rendering medical services. By estimates of IDC, universal distribution of robots will happen in hospitals of the USA during the period from one to three years.

It is interesting that unlike robots who already managed to get into health sector unmanned aerial vehicles (UAVs) yet are not used by medical institutions. In any case, such experience did not appear at one of the hospitals participating in poll of IDC.

Nevertheless, analysts are convinced that in the next three-five years drones will also find application in health care.

How UAVs can be useful for delivery of health care, in June, 2017 became known from experience of the Swedish scientists. Using experimental flights of the UAV specialists showed that drones are capable 17 minutes faster to deliver in the necessary point an automatic external defibrillator for the help to the patient, than it happens in a case to the normal ambulance car.[7]