Apple Watch is on sale more, than all Swiss watch combined

In 2019 it was sold to more Apple Watch, than hours from the Swiss brands combined. Such data published on February 5, 2020 in Strategy Analytics analytical company.

According to the experts, in 2019 sales of Apple Watch on a global scale reached 30.7 million pieces, having increased by 36% concerning an indicator of year prescription, equal 22.5 million units. For comparison, the Swiss companies, including Swatch, implemented in total 21.1 million hours at the end of 2019. It is 13% less, than in the 2018th. 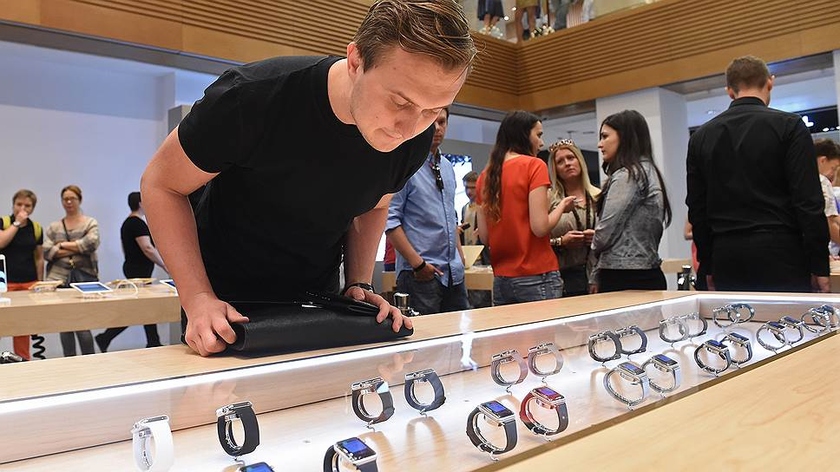 According to the senior analyst of Strategy Analytics  Steven Waltzer, the Swiss brands lose young audience, it are pleasant to which  Apple Watch more and more.[1]


The expert connected success of Apple Watch with an attractive design, technologies and applications, convenient for users.

Comparison of sales of Apple Watch and hours of the Swiss brands, data of Strategy Analytics

Analysts estimate the world market of clever experts at 47.34 million pieces at the end of 2019. It is expected that sales of this electronics will increase on average by 14.5% annually and will reach 117.51 million pieces by 2025.

58% of the market occupy Apple, Fossil, Fitbit and Samsung

On May 12, 2019 it became known that the Juniper Research agency published the estimates of the market of the smartwatch. According to data of the company, leaders — Apple, Fossil, Fitbit and Samsung — in total occupy 58%, however by 2023 this indicator will decrease to 47%. Growth of smaller players, such as Garmin, Huami and Huawei will become the reason. Nevertheless, Apple will be a sole leader of the market in the next 4 years, and Huawei will show the highest annual average growth in 20%. 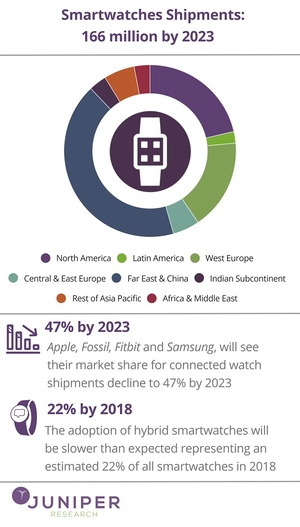 Smaller producers will provide sales growth due to more point approach to the choice of a niche in the market, orientation to specific scenarios of use of the smartwatch and flexible price policy. Large players will continue to work in a bonus segment, I am guided by a full range of collecting and the analysis of indicators of daily activity, fitness and health.

If in the recent past wearable devices and the smartwatch were guided by tracking of fitness indicators more, then in the next years to the forefront there will be functions of tracking of the indicators affecting health — pulse, pressure, etc. Apple and Withings will become leaders in this direction, and as catching up Fitbit and Garmin will act.

Growth of smaller players will happen first of all due to the Chinese market where sales will make the smartwatch in the lowest price segment. The Far East region, the including China, in 2018 overtook the North American market – the 25th million sold smartwatch against 19.5 million. By 2023 the gap will only increase, and sales in the Far East region will treble.

In 2018 the amount of the world market of the smartwatch was about 31 million pieces, having increased by 41% concerning the 2017th thanks to activity of such brands as Apple, imoo,  Fitbit and Samsung. The data of analysts of Counterpoint Technology Market Research published on June 25 the 2019th demonstrate to it.

In 2018 about 11.5 million copies of Apple Watch were delivered that for 22% exceeds an indicator of year prescription. Apple saved the leading position in the market of the smartwatch from shares in the amount of 37%. On the second place there was an Imoo brand (10%), and Samsung closed top-3 (9%). 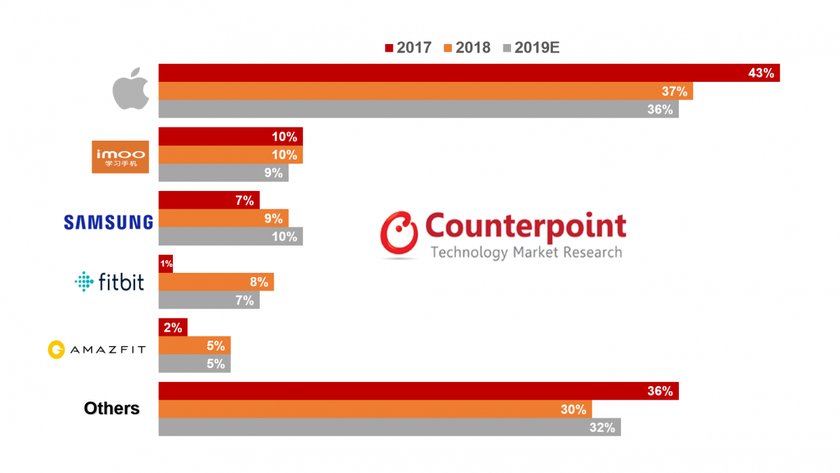 The analyst of Counterpoint  Satyajit Sinha explains absolute domination of Apple with emphasis of the company on the function connected with care of health such as ECG and determination falling of the user.


Apple Watch Series 4 was become the most popular smartwatch in the world at the end of 2018. Two more models from Apple entered the five of the most sold models of which it was the share sales. 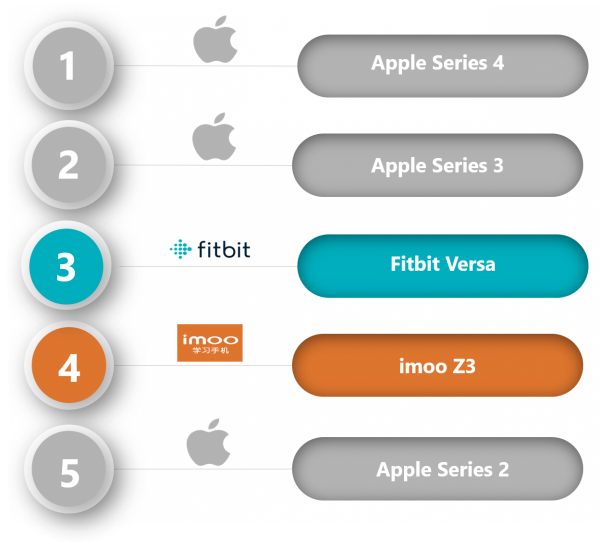 The most sold smartwatch in 2018, data of Counterpoint Technology Market Research

Though structures of Samsung did not get in top-5, the company showed good results in 2018, having increased deliveries of the smartwatch to 90%. The senior analyst of Counterpoint  Sujeong Lim says that in products of Samsung of people attract the rotating rim to navigation via interface and design, traditional for hours.

Shipments of the Huawei smartwatch in 2018 jumped by 129% thanks to the fact that the company "relied on the OS, effective design and availability", the study says[3]

In 2018 the world market of the smartwatch updated a record, and a half of sales fell on Apple Watch. It is said in the research published by Strategy Analytics on February 27, 2019.

For the 2018th producers delivered in total 45 million smartwatch that never was. In comparison with the 2017th shipments of gadgets jumped by 54%. 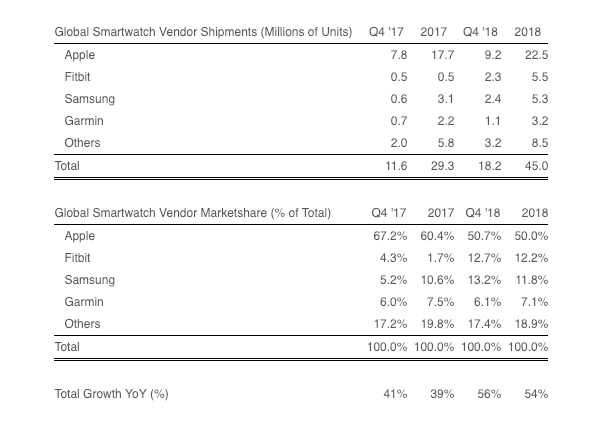 The world's largest producers of the smartwatch given to Strategy Analytics

According to the employee of Strategy Analytics  Steven Waltzer, sales of the smartwatch promptly grow as "consumers want to complement the smartphones with accessories and to have digital communications on the wrist".

Apple produced about 22.5 million computerized watch in a year that it is more, than the closest persecutors (Fitbit, Samsung and Garmin) combined. More than 81% of deliveries of the smartwatch on a global scale at the end of 2018 were the share of the leading four.

The chief executive of Strategy Analytics Neil Mawston says that the market share of Apple Watch gradually decreases as it is won by Samsung and Fitbit companies which in 2018 considerably improved the assortiment of the smartwatch and presence at retail.


According to the expert, Fitbit, Samsung and other companies become more and more competitive in category of hours for sport and listening of music that negatively affects indicators of Garmin.

As for Samsung, the company returned on the second place on sales of the smartwatch in the fourth quarter, but remained at the third position according to the results of all 2018. Stephen Uoltser noted that the new Samsung Galaxy Watch models were popular in North America and Asia.[4]