The firm expects that in 2017 world deliveries of tablets will decrease by 6.1% and will make 14.78 million pieces.

IDC: Falling of the market within 2 years

At the beginning of February, 2017 the IDC analytical company announced that the world market of tablet computers is in decline more than two years. At leaders of Apple and Samsung Electronics of delivery are strongly reduced.

IDC counted 174.8 million tablets released in 2016 on a global scale that 15.6% less than value of year prescription. In October-December when shipments decreased more than by 20%, the market of tablets showed the ninth in a row quarter recession. 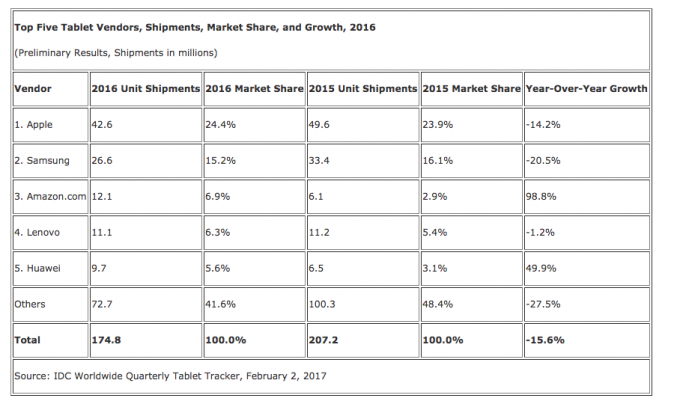 Market falling researchers connect with weak sales of the traditional models which do not have removable or the rotating keyboards. Though in some regions, like the Middle East, Africa, Central and Eastern Europe, remains perspectives for increase in demand for such electronics, simple inexpensive tablets loses relevance and does not bring a large income to producers.

More and more vendors direct to the hybrid electronics capable to perform functions of notebooks and tablets. However this segment slows down growth because tablets with the removable keyboard and transforming computers came nearer in respect of price relation and performance, the senior analyst of IDC Jitesh Ubrani notes.


Apple remained the largest supplier of tablets in 2016, however shipments of iPad decreased more than by 14% up to 42.6 million pieces. At the company hybrid devices (iPad Pro can be completed with the removable keyboard) are also provided, however only 10% of sales of tablets in assortment of Apple fall to their share.

In 2016 Samsung which remained on the second place in the list of leaders of the tablet market reduced release of gadgets by 20.5%, and following Amazon increased deliveries twice thanks to the offer of ultrabudget models.[1]

IDC predicts recession of sales for 9%

At the beginning of February, 2016 analysts of IDC published results of a research of the world market of tablet computers. Its volume as experts found out, was reduced more than by 10%.

According to calculation of IDC, in 2015 universal deliveries of tablets made 206.8 million pieces against 230.1 million the previous year. At the same time the segment of hybrid devices (with the connected keyboards) grows at two-digit rates since the end of 2014, and in the 2015th its volume reached record 8.1 million units. Without these devices the global tablet market dropped by 21.1% that is the biggest recession for all its history. 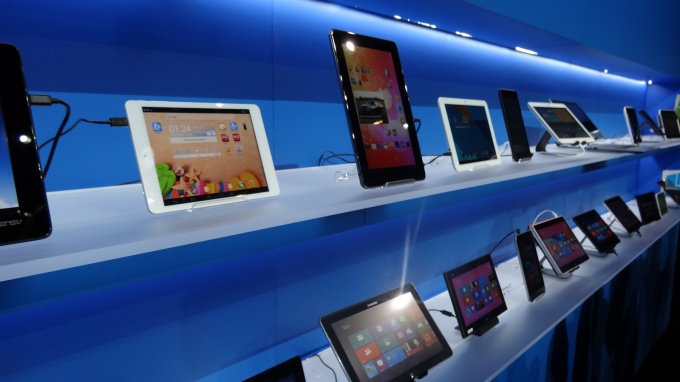 The market of tablets endured the strongest falling in the history

IDC also pay attention that the prices of tablet PCs did not reach a bottom, in what a considerable merit of Amazon company yet. Its model for $50 was included into the three of the most popular tablets in the fourth quarter 2015, and the producer — in Top-3 of the largest.

By results for all 2015 Apple remained the leader of the world tablet market, however deliveries of iPad were reduced almost by 22%, and a market share of the Californian giant — to 24% from 27.6% in 2014.

Recession — for 18.1% — also Samsung going on the second place worried. Analysts note that the South Korean giant has the wide range of tablets consisting of devices of different price categories and the sizes. Such product portfolio can promote transition of Samsung to hybrid electronics in 2016, specialists believe.[3]

Digitimes Research: shipments of tablets will drop by 11.8%

In the analytical report Digitimes Research Special Report it is reported that in 2015 will seriously suffer a share and IOS-DEVICES, and Android gadgets. In 2015 world shipments of tablets can drop by 11.8% (in comparison with results of 2014), having reached a point of 244 million pieces of equipment, analysts of Digitimes Research consider. For such forecast there are two essential bases - it is essential market saturation of tablets as initial level, and a premium and also rapid growth of popularity of large smartphones and inexpensive notebooks which begin to win competitive struggle.

The share of 7-inch tablets will fall from 51.3% in 2014 up to 44.3% in the 2015th. Especially strongly decrease will strike the companies which release so-called noneym-tablets (are considered in the research Digitimes Research). Despite it, in a segment of tablets with diagonal from 10 inches growth by 20% within a year is expected. It is substantially connected with the fact that vendors look for new opportunities for themselves, offering new options of use of tablets in corporate and industrial environments.

In the analytical report Digitimes Research Special Report it is reported that in 2015 will seriously suffer a share and IOS-DEVICES, and Android gadgets. In spite of the fact that Apple iPad tablets with the diagonal of 12.85 inches, most likely, will increase a share of IOS-TABLETS on the market, drop in sales of "normal" iPad and iPad mini will be more essential. The forecast for IOS-TABLETS for 2015 made "only" 49.9 million devices.

At the same time, the share of devices based on OS Windows in 2015 will increase by 50%, thanks to the growing shipments of both tablets, and hybrid devices 2 in 1 based on the Intel processors Core M. Besides, good year waits for the company Intel which growth in sales of tablets based on processors will make 50%. In 2015 40 million tablets based on chips of Intel will be supplied to the world market.

Gartner: Growth in sales of tablets slows down

The Gartner company stated in the fall of 2014 that growth in sales of tablets in 2014 slows down as new buyers began to prefer alternative devices, and those who already have tablets try to prolong time of their life. According to Gartner, in 2014 global sales of tablets will make 229 million pieces that is 11% more, than in the 2013th. It will correspond to 9.5% of all world market of computer devices (the PC, tablets, ultramobile devices and mobile phones) in 2014. Let's remind that for 2013 deliveries of tablets grew by 55%.

The Dell company announced in the fall of 2014 survey results of Chief information officers from ten countries of the world concerning use of tablets in corporate environment (International Tablet Survey 2014). Poll showed that tablets help to increase mobility and productivity of employees. Besides, employees positively speak of use of these devices in work.

The research International Tablet Survey 2014 is conducted based on online poll of Harris Poll of Nielsen analytical company by request of Dell in the summer of this year. The research shows how tablets in corporate environment are used: what approaches are applied by IT heads to use by employees of tablets in work whether plan the companies of their purchase and as tablets affect efficiency what bear in themselves advantages and difficulties. Comparison of tablets with devices of other types is carried out, it becomes clear as far as tablets meet expectations of IT heads. Customers of Dell, heads of the companies and Chief information officers around the world can use results of a research in the work when planning IT strategy already now and in the future. 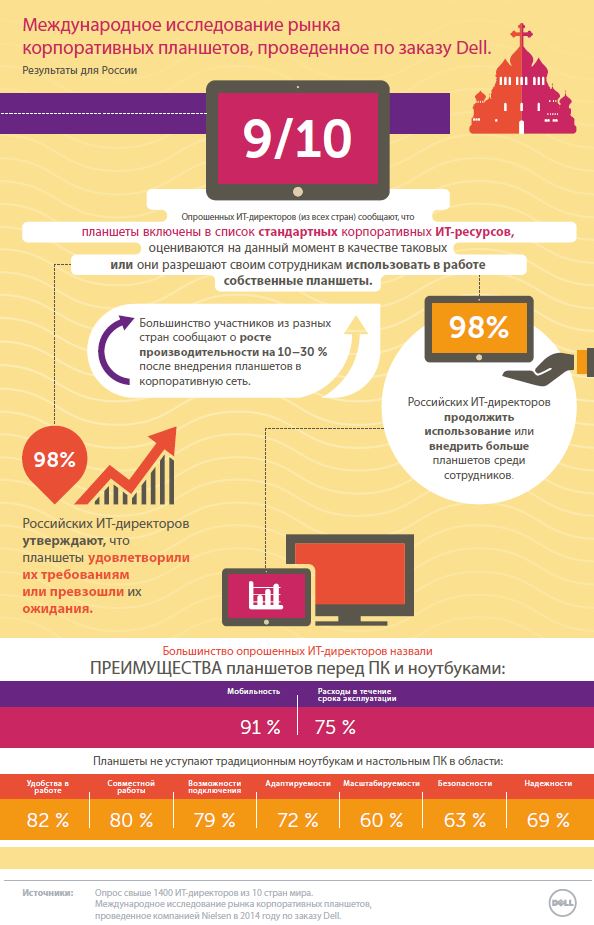 According to IDC, in the first quarter 2013 of sale of tablets in the world grew by 142.4% in comparison with the same period of last year. In a quarter 49.2 million tablets were sold — more, than for all first half of last year, and signs of deceleration of growth of analytics are not seen yet.[4]

Both Apple, and Samsung showed the results which exceeded expectations of analysts. Tablets of production Apple 19.5 million whereas analysts spoke about 18.7 million were sold. Usually in the first quarter, after an active New Year's season, sales of products of Apple sharply fall, and buyers wait for release in March of new models, but this year the difference turned out less thanks to as analysts, popularity of iPad mini, growth of corporate purchases and postponement of release of the new iPad model for the fourth quarter of previous year consider.

Samsung was succeeded to raise sales by 282.6%, however it still strongly lags behind Apple by the number of the sold tablets — 8.8 million pieces. Demand for Samsung tablets of the small size gradually grows, analysts note.

Demand for Nexus 7 tablets helped ASUS to come to the third place among producers of tablets, but as analysts believe, it will be difficult for it to hold the won positions. The Google I/O conference will take place soon, and many producers will produce new models of tablets based on Android.