Main article: Trends of IT market of Russia

During implementation of robots in production domestic integrators use a number of technologies – image processing, orientation in space, cloud computing and so forth. For example, the Abagy Robotic Systems company, creates a system which can program the robot based on drawings and external secsorics – without participation of the person. The Slam system of navigation of the mobile KUKA robots used to Skolkovo allows the robot to be guided independently in space and "see" the changes happening around. The relevant direction of technological development is interaction with elements of the Industry 4.0 and Internet of Things (IoT). 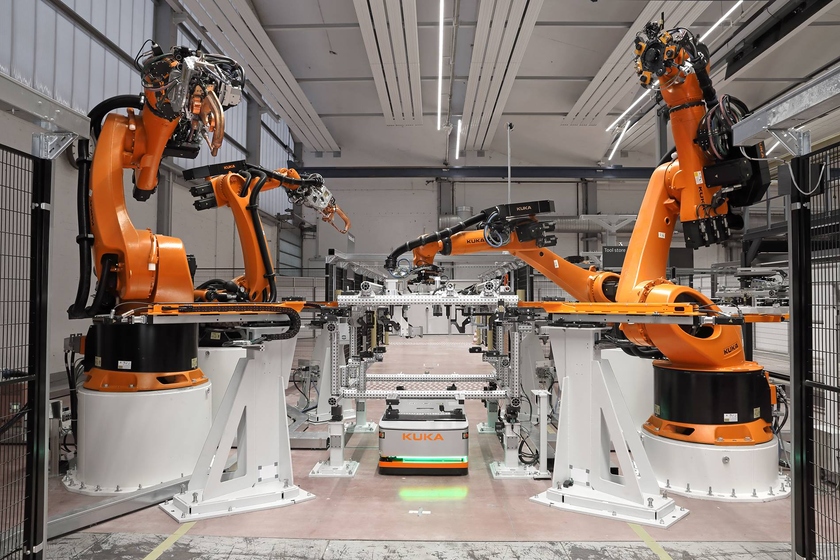 Let's consider in more detail several technology directions in development of industrial robotics about which experts at the end of 2019 - the beginning of 2020 spoke.

More and more active use of technologies of machine vision

The integral components of the Industry 4.0 are machine vision and the radio-frequency identification chips which are built in the industrial equipment of robots.


BFG Group is solidary with Kapishnikov. Machine vision as consider in the company, is more and more actively applied in modern robotic solutions which become harder and harder.


According to Artem Lukin, the founder of Tekhnored company, the general distributor of Universal Robots in Russia, machine vision even more often is implemented into robotics as this technology becomes more and more available and perfect. In two-three years, according to the forecast of the expert, machine vision will make a revolution in the market of industrial solutions at all and will be implemented in every second project.

Kawasaki Robotics considers that in Russia this technology is still not really demanded, except for tracking a seam in welding. At the same time in the developed countries as noted in the company, the system of machine vision is already actively used, especially on flow lines in the food industry.


The Head of Department of robotics of FANUC RUSSIA Dmitry Kaynov informed TAdviser o the fact that in an arsenal of the company - the solution of electronic vision system iRVision. According to Kaynov, it can be implemented to the customer without difficult programming or expert knowledge as is the solution integrated in the robot which is not requiring the external interface.

Demand of technologies of adaptive control by the robot

According to experts, technologies of adaptive control are more and more demanded by the robot. The development is gained by the different systems and sensors allowing the robot to learn changes of the certain conditions connected with its task or influencing its work.


Safety of joint work of the person and robot

Recently very much attention is paid to safety of process of joint work of the robot and the person. According to Evgeny Krysanov, the chief engineer of MDI2B company integrator, for more flexible and safe integration producers of robots equip the complexes with security packets, such as SAFE MOVE (ABB) and DCS (FANUC).

At the same time, separate categories of robots "are initially ground" for work side by side with people. It is about collaborative robots (kobota). This type of devices differs in the small sizes, at the same time they are simple in programming and use, are safe for the person.


Kobota can supplement and improve activity of employees, without posing at the same time any threats. The set of similar developments, according to Kawasaki Robotics, is conducted in the field of medicine and pharmaceutics. The KUKA company in addition to medicine, widely uses this type of robots in automotive industry. Increases use of similar devices in the most different industries and Universal Robots company. 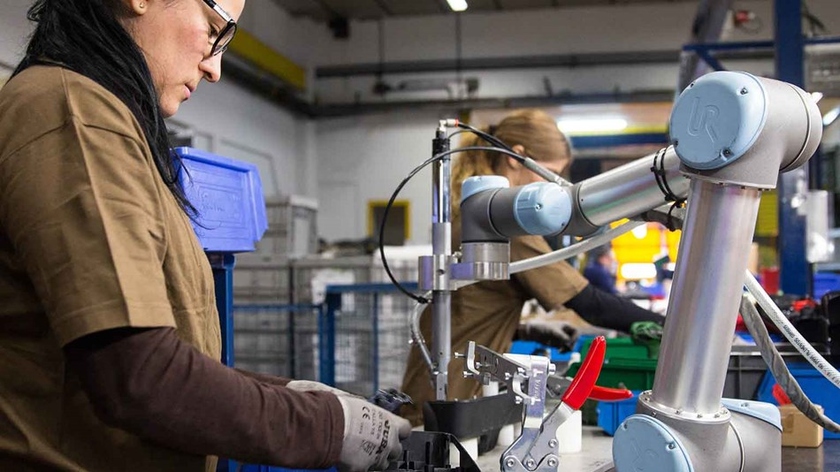 The six-axis UR5 manipulator works in close proximity to operators, exempting them from accomplishment of the repeating tasks

Collaborative robots allow to save the staff of production divisions from routine transactions, thereby releasing their time for more responsible tasks.


Integration of industrial robots into other solutions

The important direction of development of the sphere of industrial robotics is integration of robots into other software and hardware solutions. For example, Prof-IT Group is ready to offer customers integration of industrial robots with MES systems – for accounting of course of production, QMS – for product quality control, RFID – for traceability of transactions and products by the platform of Internet of Things with opportunities of predictive analytics of a status of industrial equipment, Arkady Dilman tells.

Kawasaki Robotics sees perspectives of expansion of opportunities of the robot at the expense of additional resources of connection and interaction. Robots receive add-on modules of connection, including by means of wi-fi and Bluetooth technologies.

The director of strategic projects Lanit Sergey Litvinov considers that "cloud robots" who are integrated into production IT systems of the enterprise have the largest potential and can perform certain functions within the general business processes.

Protection of robots against different vulnerabilities - one more important direction. As the CEO of KUKA Russia Dmitry Kapishnikov told TAdviser, issues of protection of the German robots against influence from out of through network began to be discussed in Europe 15 years ago. At the same time KUKA robots, according to him, as of the end of 2019 have the greatest possible protection. However, he specified that the good specialist will always find vulnerability in the robot therefore the question of protection of industrial robots should be raised on the level of all enterprise and have several levels.


Believe in Universal Robots that distribution of robots who have interfaces for access to network will give an impetus to emergence of new classes of viruses.


The problem of the industrial cybersystems, in opinion Dilman's Arcadia, consists in difficult elimination of vulnerabilities from producers. Its reasons he noted application of the specific software, an obsolete equipment and difficulty of interruption of technology process.


Use of artificial intelligence technologies and machine learning

In the field of industrial robotics find reflection of machine learning technology.

The Artificial Intelligence (AI) mainly develops on the party of personal computers with powerful processors in total with neuronets. And the robot in this context is, as a rule, "actuator" which controller accepts the finalized data after processing by artificial intelligence in the mode of the ready program or adaptive execution of commands. 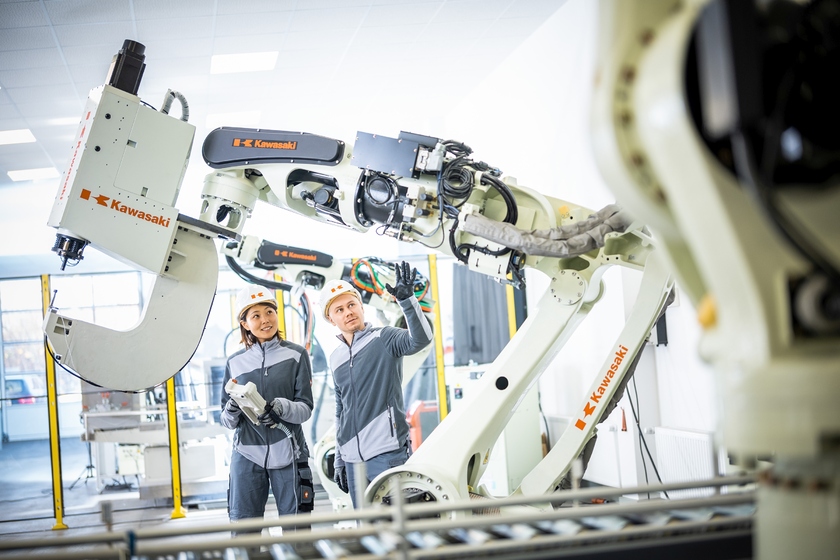 About development of the system of machine learning which is intended for small-lot production TAdviser was told in Kawasaki Robotics. The essence of a system consists in variability of the performed operation. In case of need the operator in the manual mode trains the robot of a new trajectory of the movement then the robot is capable to distinguish signs of a variation and to repeat the new movement. Besides, at consolidation of robots in a single network, experience of one robot can be passed on by everything to robots of his network. Thus the uniform knowledge base which any robot entering into network can use is created. This technology received the name "Saksessor" and actively is implemented at the Japanese enterprises, representatives of Kawasaki Robotics explained.

The Weber of Komekhaniks company considers that machine learning will allow to develop artificial intelligence.


Universal Robots told that kobota which the company makes are a striking example of use of AI in industrial robotization:


Application of an open program code for expansion of target audience

In industrial robots of the open source software producers treat use differently. In KUKA robots, for example, it is not used.


Nevertheless, other developers consider this direction important and perspective. As Artem Lukin, the founder of Tekhnored company noted, Universal Robots became one of the first robotic companies which began to use an open program code during creation of robots.


According to Ivan Borodin, the CEO of producer of logistic Ronavi Robotics robots, use of the open source software allows vendor to expand target audience. Industrial robots with the closed code as Borodin noted, can be integrated only as the turnkey ready project.


Development of controllers of industrial robots

Current trend of development of controllers of industrial robots is embedding of additional "smart" functions – the program and hardware options allowing robots to execute much more technology transactions. In particular, hold such opinion in FANUC.

The KUKA company first of all is guided by convenience and cost of service of controllers. According to Dmitry Kapishnikov, in most cases the size of the controller is not of great importance for industrial enterprise, and here the speed of its repair, in case of failure – is paramount.


BFG Group notices that controllers become less, at the same time their performance grows. In addition, the quantity of the additional peripheral equipment having an opportunity constantly increases to be connected to them.

Kawasaki Robotics told that the company creates the most compact and easy controller for the industrial robot: