The analytical center TAdviser together with the National Association of Participants of the Market of Robotics (NAPMR) prepared the list of 30 largest Russian integrators of industrial robots and defined the leader of this market. Article is included into the overview "the Russian market of industrial robotics of 2019"

As a result of consideration of indicators of the companies all of them were distributed on three parts. 16 integrators which answered immediately to two criteria got to the first part. The second part brought together 14 integrators which indicators met at least one criterion. The additional third list included the remained companies which did not overcome the sounded threshold.

In each list of the company were sorted in alphabetical order without specific indicators of activity. Such decision was made after discussion of preliminary rating with market participants to minimize influence of possible inaccuracies in revenue indicators.

At the same time the unambiguous market leader - Vektor Group was defined. During 2016-2018 this company installed 97 robots for the total amount of 785 million rubles. 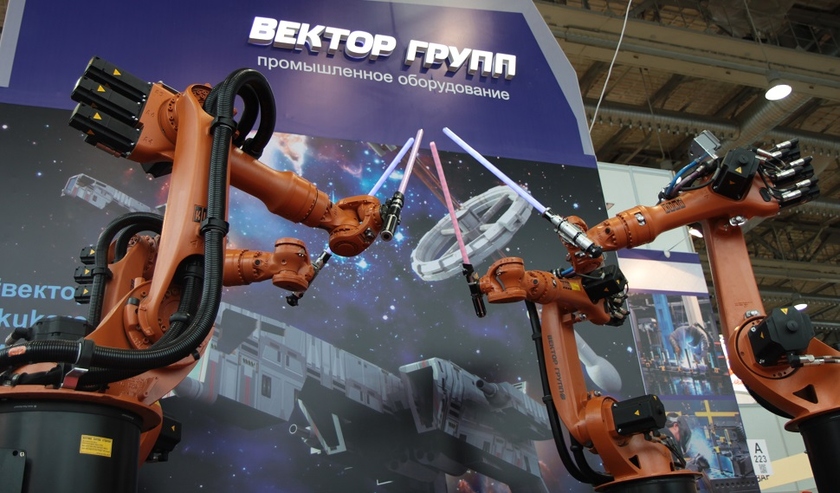 Vektor Group, according to TAdviser, is the leader of the Russian market of industrial robotics among integrators

As it was already noted above, the first part of the list of the largest integrators included 16 companies. Their total revenue from integration of industrial robots for 2016-2018 made more than 5 billion rubles. For the specified period they installed almost 600 robots.

In general 30 largest companies of the market for the three-year period were set by over 790 industrial robots. They earned 7.4 billion rubles from this activity.

Comment on Top-30: The most part of the data provided by the companies was checked and confirmed, including using producers of robots. However some indicators it appeared it is impossible to confirm. Such data were checked on indirect signs. Nevertheless TAdviser and NAURR reserve the right to review a position of the company or to completely remove it from Top-30 if after the publication the facts of providing false data will be elicited. All comments and notes on Top-30 are considered till January 15, 2020. It is possible to send them to the chief executive of NAURR Alice Konyukhovskaya (ak@robotunion.ru) and the analyst of TAdviser Mikhail Romanov (mr@tadviser.ru)

One and all integrators which entered in Top-30 have production area for assembly of robotic projects. The size of such platform can vary from 40 to 2500 sq.m. Some participants declared plans of expansion of the production site.

The companies from Top-30 as of June-July, 2019 totally had more than 380 technical specialists who are engaged in implementation or production of robotic complexes. At least in staff of the company there were 4 such employees, at most – up to 45 specialists.

Results of a research can be used by Fund of development of the industry when forming the list of system integrators when which attracting decrease in a rate on loans within the Industry Digitalization program to 1% is possible. In this case the enterprises which will purchase robotic complexes at the companies which entered the list will be able to obtain a preferential loan at the lowered rate. It is possible to study the program of Fund in more detail here.

The additional third list included 25 companies which did not pass by criteria in Top-30. Here not only newbies in the market, but also rather mature players with experience of implementation of robots and robotic complexes on large-scale productions got. However quite high criteria left them behind line of the main list.

Partnership with foreign producers of robots

During material preparation the question was asked integrators: "For what transactions and scopes you implemented robots?" On survey results it became clear that 35 of 55 respondents of integrators implemented robots for a material transfer, 34 – for welding, 32 – for palletizing. Other results are given on the chart below. 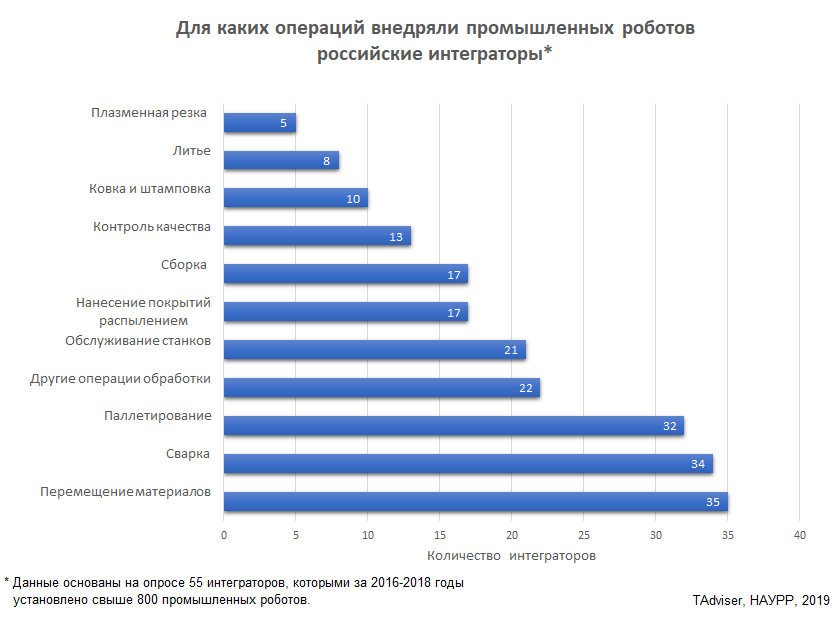 More detailed information on activity of integrators, including not included in the main list is presented in the separate table.

Integrator of industrial robots – the company which develops projects on automation of production processes based on industrial robots executes assembly, installation and setup of robotic complexes on production and also makes further service of the implemented equipment.

The industrial robot - automatically managed, reprogrammable, multi-purpose manipulator programmed on three or more degrees of mobility which can be installed permanently in a workplace or can have traficability and which is used in automation systems of industrial enterprises.

Stages and technique of creation of Top-30

Creation of the list of the largest integrators consisted of 3 stages:

The data obtained from 55 integrators were compared with criteria of revenue and the number of the installed robots. As a result of the company were separated into three parts, two of which became a basis of Top-30.

Along with preparation of Top-30 of the Russian integrators, TAdviser and NAURR were going to collect a ranking for domestic manufacturers of industrial robots. However owing to the fact that in Russia of such companies for the present it is not enough was decided to refuse this idea. Nevertheless, the similar rating is going to be prepared in the future.

The list of the Russian producers of industrial robots without their indicators of activity is given below.