UAVs and drones in medicine

At the end of April, 2020 the police of the city of Uestport (State of Connecticut) announced the beginning of use of "pandemic UAVs" which will allow to estimate temperature of people, the heart rate and frequency of breath at distance to 60 m and also to reveal sneezing and cough. Read more here.

Start of drones in Udmurtia for the notification of the population

On April 22, 2020 the General Directorate of Ministry of Emergency Situations of Russia on the Republic of Udmurtia announced the beginning of use of drones with loudspeakers for the notification of inhabitants about need to observe self-isolation. Unmanned aerial vehicles are used in Grakhovsky and Alnashsky districts of the region within fight against spread of a coronavirus of COVID-19. Read more here.

In the middle of April, 2020 it became known that the police of the city of Chula-Vista (California, the USA) began to use drones for  observation of citizens in the period of a pandemic of a koronavirusny infection of COVID-19 after the governor of the state Gavin Newsom  asked inhabitants to stay at home. Read more here.

Drones began to identify the infected people on streets

At the end of March, 2020 the University of South Australia in cooperation with the Canadian company Draganfly provided the Pandemic Drone unmanned aerial vehicle for remote monitoring and identification of people with infectious respiratory diseases, in particular, with a coronavirus. Read more here.

In February, 2020 while the Chinese authorities try to prevent spread of a fatal coronavirus COVID-19, the producer drones DJI helps to disinfect streets. According to local MEDIA, volunteers of the company processed 3 million square meters in only four days. Spraying by disinfecting solution was carried out from February 7 to February 10 in the southern city of Shenzhen where there is DJI headquarters. Drones covered the wide territory including the plants, residential areas, hospitals and treatment facilities.

In January and February, 2019 local authorities and owners of agricultural UAVs already used drones for spraying of disinfectants, but found for UAVs also other application. Some vladelets use drones to disperse public meetings and to extend warnings through speakers. Drones also helped with creation of additional hospital premises with Wuhan, flash epicenter, having provided lighting on a building site when urgently necessary premises were built. 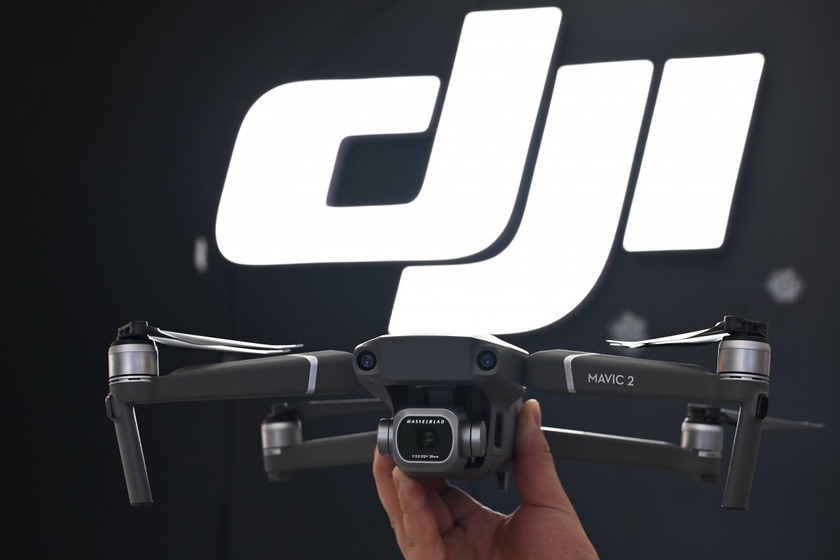 The producer of DJI drones helps to disinfect streets

Nevertheless, not all inhabitants Shenzhen agree that spraying of disinfectant on all city is a good method to stop a virus which already claimed more than 900 lives and infected tens of thousands of people. Experts in public health care to which Business Insider refers, consider that the attempt to destroy microorganisms in scales of all city is ineffective, and suggest to concentrate efforts on disinfection on departments of emergency aid and other sick-lists and quarantine zones.

The producer of DJI drones closed the offices in China earlier to prevent spread of a virus.


Start of the drones defining people without protective masks

At the beginning of February, 2020 China started special drones with loudspeakers which remind citizens of safety rules which observance should constrain the outbreak of a coronavirus.

On the platform of microblogs Weibo it is shown how the drone scans passersby regarding violations, for example, of lack of a protective mask. Having detected the violator, the drone politely, but firmly warns the person that he put on a mask or went home. The personnel published by Global Times shows how the drone publicly lectures people without masks. 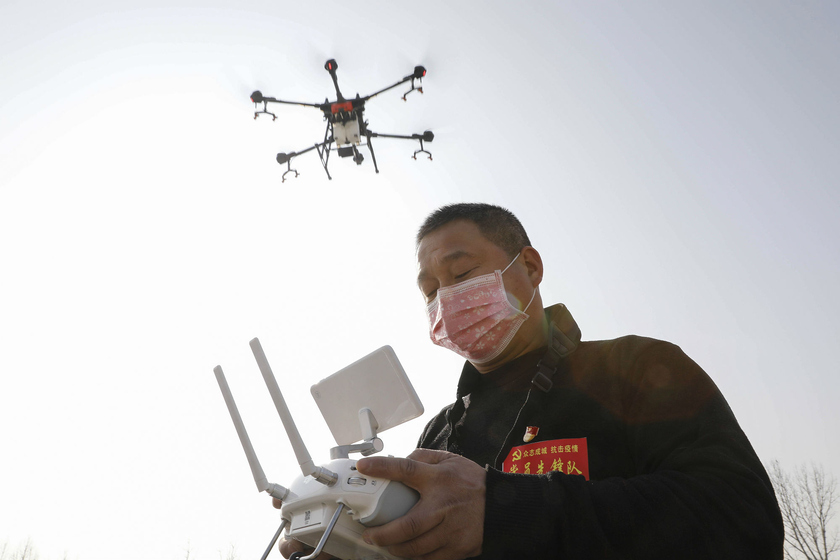 Thus China tries to stop spread of a coronavirus which infected already more than 20,000 people. Many inhabitants estimated a humour note which clips with drones introduced in this uneasy time and also practical application of technologies in the remote parts of the country. Nevertheless, sceptics consider such use of drones one more example of infringement of individual freedoms.

However drones work not only as patrol. According to messages of the Chinese media, they are applied in all spheres. The producer of agricultural XAG UAVs already works on creation of the park of drones which could spray disinfectants on affected areas: bus and railway stations and other public places. The producer considers that drones patrolmen - the quite good piarny course, but not as effective as real disinfection.

Meanwhile the state media of People's Daily published on Twitter of a photo on which the UAV takes temperature of inhabitants of the multi-storey apartment house in the Province of Jiangxi. Many citizens are afraid to catch at contact with medics, and use of drones should calm them suspicions and provide careful monitoring in quarantine zones.[2]

2018: Global Market Insights: the size of the market of medical drones — $40 million

In 2018 the size of the market of medical unmanned aerial vehicles reached $40 million, counted in Global Market Insights analytical company. Data were published on July 2 the 2019th.

According to forecasts of experts, revenue in the considered market will grow more than for 24% annually during the period from 2019 to 2025 and will reach $399 million by the end of this segment. 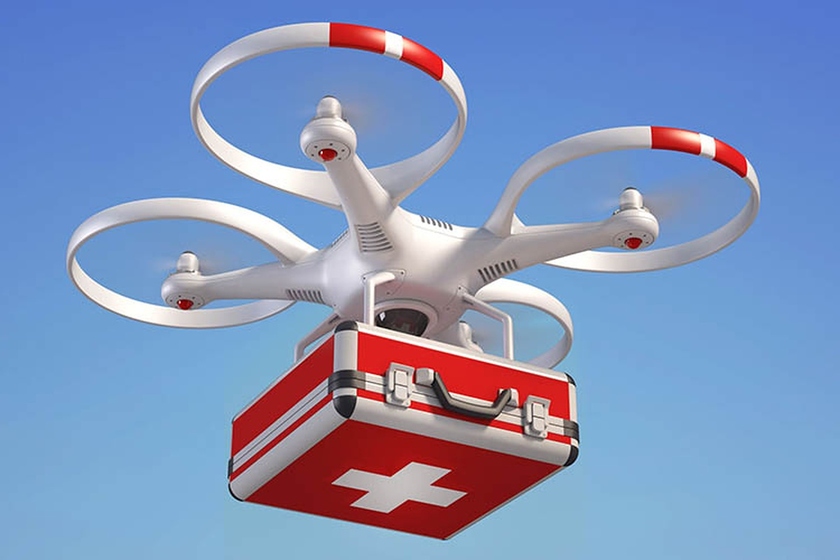 The greatest growth rates — for 25% — are expected in the segment of the equipment and services used for transportation of medicines. Besides, even more often UAVs are used for rendering the emergency help.

Thanks to the video cameras which are built in drones it is possible to remove informatively important images which help to understand with a situation on the ground, to make to specialists the decision most of which effectively will promote determination of further actions for rescue of victims. The UAV allows to perform investigation of the area near emergency, to define dangerous local sections thanks to what less so precious time in such situations will be spent.

In a research it is noted that the lack of access to medicines in critical cases is one of basic reasons of death in underdeveloped regions. Medical UAVs effectively deliver drugs to rural areas, distinguishing obstacles on the way and avoiding collision with them. In some countries drones began to be used for delivery of donor blood.

Global Market Insights is sure that growth of the market of medical drones will be promoted by the new technologies capable to increase efficiency of these devices and frequency of their use for emergencies. Producers actively invest in research and development to create the innovation UAVs for the medical purposes, it is specified in the report.[3]

Remote determination of pulse rate and breath of people

At the end of September, 2017 the Phys.Org edition announced creation and successful approbation of a system of remote measurement of pulse and frequency of breath of people on the basis of the unmanned aerial vehicle (UAV).[4] 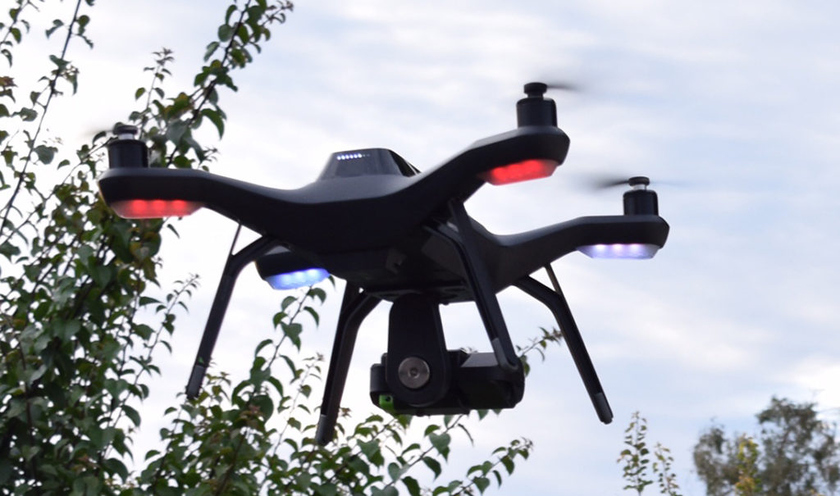 Under the leadership of the curator of the project of professor Javaan Chahl students of the UniSA university tested a series with participation of 15 healthy people aged from 2 up to 40 years. During the test flights which were taking place as in premises, and outside UAVs did measurements from a distance of three meters.

Results showed that an UAV system allows to determine the frequency of serdtsebiyeniye and breath with the same accuracy, as well as traditional contact methods, using the ECG, pulseoxymeters and respiratory monitors. Scientists intend to improve a system and to increase distance from which it will be possible to register vital indicators.

Developers call technology break and see a set of options of its application. Such UAVs systems can be used at assistance to victims in car accidents, natural and technogenic catastrophes, for remote monitoring for patients in clinics for elderly people and in neonatologichesky departments for observation of newborns and also in combat zones.

One more perspective sphere - security. The remote system of determination of pulse will help to identify potential terrorists in public places.

Patients with cardiac arrest need the urgent help – doctors should reach them as soon as possible. "Ambulance" in emergency can go, neglecting some traffic regulations, however the Swedish researchers suggested to use drones for rendering the urgent help to such patients. With their help they suggest to deliver quickly to patients defibrillators, write "Vesti" in June, 2017.[6].

To prove that such delivery really will be faster, scientists even organized competitions between ambulance cars and drones – in all 18 cases oktokopter (eight-motor devices) loaded with defibrillators reached the hypothetical patient quicker, than the car. The average time of the car in way was 20 minutes while the drone overcame test distance in five minutes.

However, in spite of the fact that delivery of defibrillators using drones can become an excellent alternative to departure of crew of "ambulance", it is necessary that the people who are near the victim were able to use this device and would not do much harm to the patient. Before a system really begins to be used in hospitals, it is necessary to test it in real time to find out whether really passersby are ready to use the equipment which arrived on the drone.

The idea to use drones in the medical purposes is not new – with their help already perform delivery of drugs and even donor blood to remote regions where it is problematic to reach to the doctor.