Mass use of mobile devices in corporate environment gave an impulse for development of solutions on mobile device management of Mobile Device Management (MDM) and Enterprise Mobility Management (EMM). The leading suppliers of such solutions gradually expand the products in the direction of Unified Endpoint Management (UEM)

In September, 2019 the Gartner analytical company published a so-called magic quadrant (research) in the field of the unified control of end devices (UEM).

In Gartner terminology the solutions UEM are used in the companies for mobile device management, personal computers and the equipment of Internet of Things. At the same time such systems are integrated with tools for management of work with clients and business processes.

The companies are called leaders of this market VMware Microsoft IBM, BlackBerry and MobileIron. 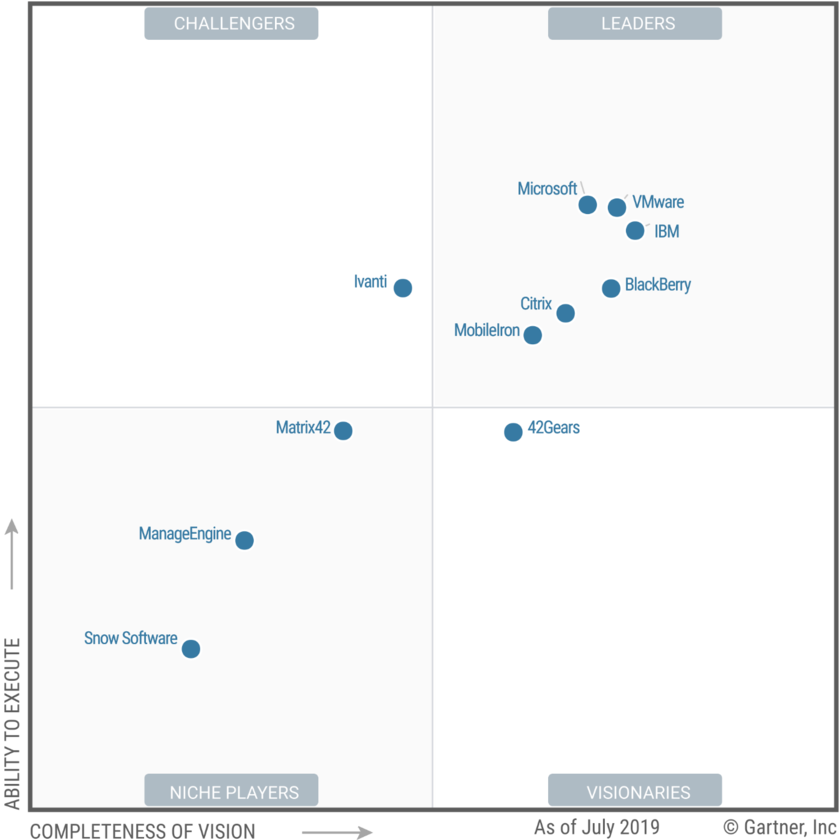 At Microsoft experts noted integration between own products and Microsoft 365 services, including control of mobile applications of Office 365 for management and implementation the politician of protection against date leaks (DLP). The procedure of transition to model of integrated management and security of devices to the organizations (UEM) becomes simpler due to integration with System Center Configuration Manager and to opportunities of gradual migration of devices in service Microsoft Intune, the study says.

Carried problems of lack of a full integration with Intune of the third-party systems of identification and access control to minuses of Microsoft, for example, from Ping Identity and Okta companies. Besides, in Intune there is no support of Chrome OS and there is a set of errors of compatibility of macOS.

Analysts carried VMware to leaders in the field of control of the unified end devices both in "capability of implementation", and in "completeness of vision". Specialists of Gartner consider that complex offers of VMware show considerable efficiency and improve security for the organizations. 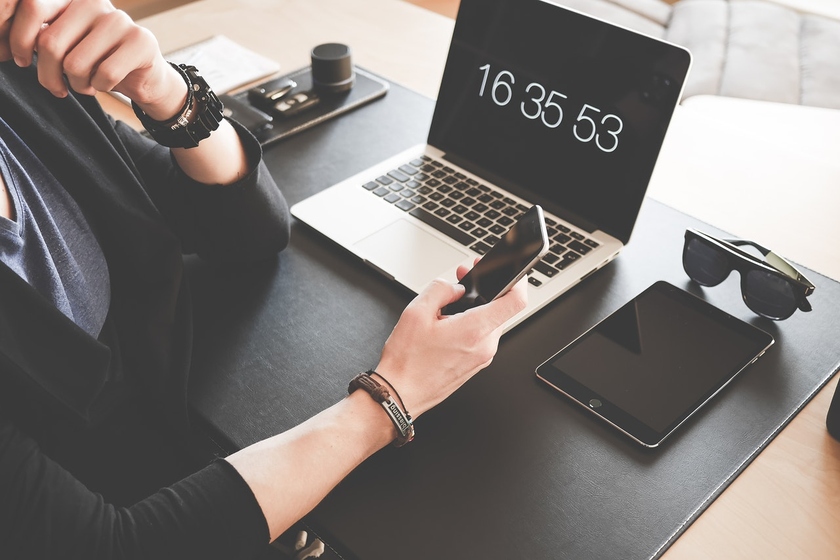 It is noted that VMware reached the position thanks to offers in the field of analytics and to licensing levels which are focused on requirements of the market and also integration of technology of management of endpoints of AirWatch (Workspace ONE UEM) and to product capabilities which are directed to the solution of modern tasks of management.

At the same time in Gartner say that in Workspace ONE flexible mechanisms of client access for state change of an event are offered only for clients with licenses which include expenditure managements on telecommunication (TEM). Also customers prefer products of the vendor specializing in UEM, but not proposing the solution

Microsoft notes that the organizations are interested in the solutions providing data access of the company only to the entrusted users working from the checked devices and the approved software. Therefore UEM solutions become especially relevant owing to several reasons:

IBM is present at the market of UEM with MaaS360 the product with Watson. It is positioned as the only platform implementing approach to the unified management of endpoints on a basis artificial intelligence which covers endpoints, end users and all connected applications, materials and data.

Referred absence to shortcomings of MaaS360 with Watson of analytics system management not in a cloud (the truth, there is a local gateway for access to e-mail and some applications) and presence of a product generally in the North American market. It is provided to EMEA much more weakly, and in other regions it almost does not move ahead.[1]

The first solutions in category MDM appeared in the market at the beginning of the 2000th years. They were demanded by the companies which used corporate specialized mobile devices, for example, for warehouse workers. Then universal distribution was gained by smartphones and tablets. Further for management of mobile applications there was a need for solutions of the class Mobile Application Management (MAM). And in 2017 in the market the trend of merge of the MDM and MAM functions appeared. Similar consolidation of systems began to be called EMM - a single system for management of all aspects of operation of mobile devices.

Single system for all types of the user devices

The last several years a trend became emergence of UEM solutions. It is a single system of control of operation of smartphones, tablets, notebooks and desktops. An opportunity to manage devices via the single console not only increases the level of information security in the company, but also considerably reduces operating costs of the growing park of devices. Control is exercised from a stage of setup of the gadget and the operating system before work with applications and data warehouses. 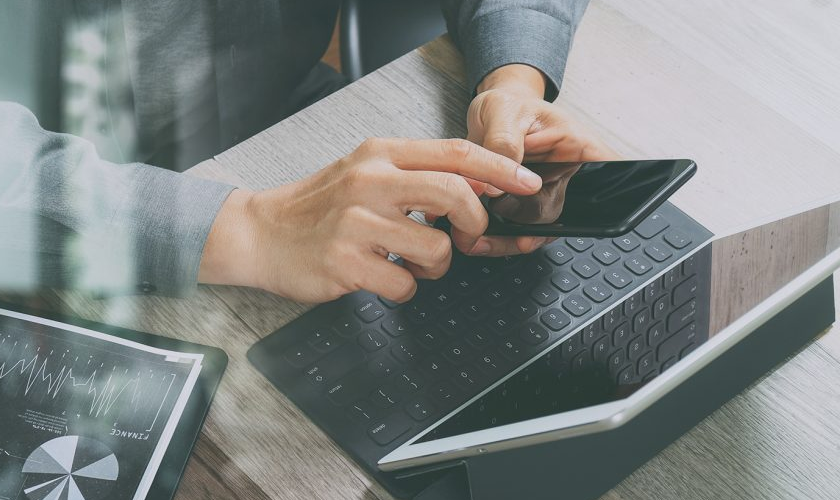 Forrester company on the basis of own research "Forrester Wave: The unified control of end devices, the IV quarter of 2018, the Rating of 12 key suppliers" voiced 28 criteria to which there should correspond the modern UEM systems. Among them:

According to opinion of many analysts, leaders in UEM solutions for April, 2019 are the companies: VMware, MobileIron, IBM, Microsoft and Citrix. At the same time a part of products of separate vendors, for example, of IBM and Microsoft, are provided only from a cloud. 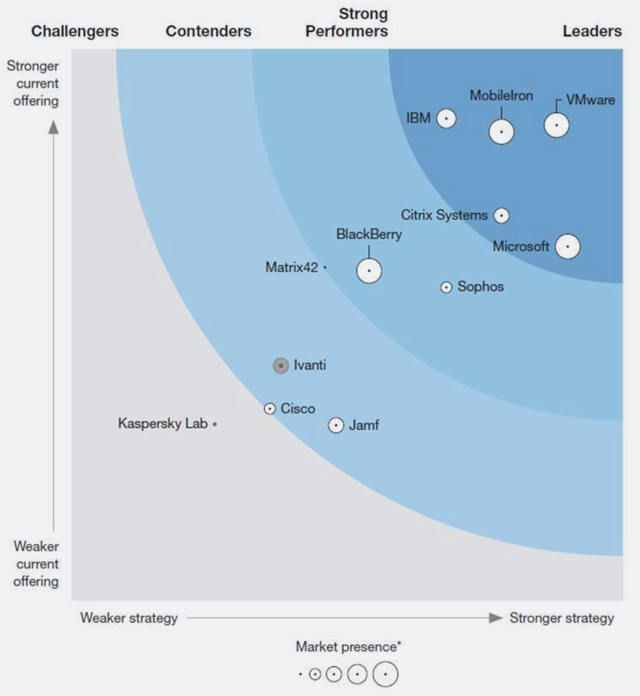 In 2018 many domestic EMM systems received a considerable boost to development because of the difficult period of interaction with the western partners. Some government institutions already started process of import substitution of software.

So, the Scientific Research Institute SOKB company releases an EMM product – SafePhone. And "The code of security" in a line of solutions has a product – Secret MDM. The built-in functionality of device management is also available in specialized operating systems, for example, Aurora from Rostelecom (earlier - SailFish). In general, many applications are already developed taking into account abilities to integrate with the ready-made solutions MDM – UEM.

For most the companies presence at employees in a workplace and the personal computer and the mobile device – a usual thing. At the same time, at some employees can not be the PC or the notebook because they are completely replaced by the smartphone or the tablet. If earlier such approach was widespread, for example, only for warehouse workers or forwarding agents, then now agents, couriers, sellers, sales representatives, house keepers of the equipment, etc. enter this class. Therefore IT heads of the companies have a need to use one software product instead of two or more. As it accelerates processes of updating and technical support of software and also reduces risks of idle times. Namely such demands are made by business to work of IT departments.