Virtual private network. VPN, Virtual Private Network. Set program and the hardware allowing to organize connection of segments of a global communication network through an open public network when ensuring the maximum security of the transmitted data without physical channel allocation of transfer and nodes of data processing. If it is simpler to speak - it is technology which gives the chance to create the virtual protected networks for confidential data transmission on open communication links.

The directory of VPN systems and projects is available on TAdviser.

According to the Russian legislation, services for enciphering of traffic can work in Russia, but VPN providers should respect the Russian blocking and not offer access to the websites prohibited by Roskomnadzor. Some providers VPN already now so work[1].

However not all hurry to observe the law, to be connected to the Federal state information system containing a list of the prohibited Internet resources and to limit to them access. Someone takes a waiting attitude, others — for example Avast stated that Avast SecureLine VPN in Russia will not provide service.

Roskomnadzor, in turn, does not hurry to block disobedient services, hoping for the obrazumitelny force of penalties.

However, for the corporate purposes the law does not extend to application of VPN so on the Russian market of virtual networks this legislative innovation will not have a direct impact.

Therefore the market will grow, though not really in high gear — for 2-11% a year. The market of cloud virtual networks for this period will annually increase by 50-350% and by the end of the considered period will reach 15% of the market of VPN in general. 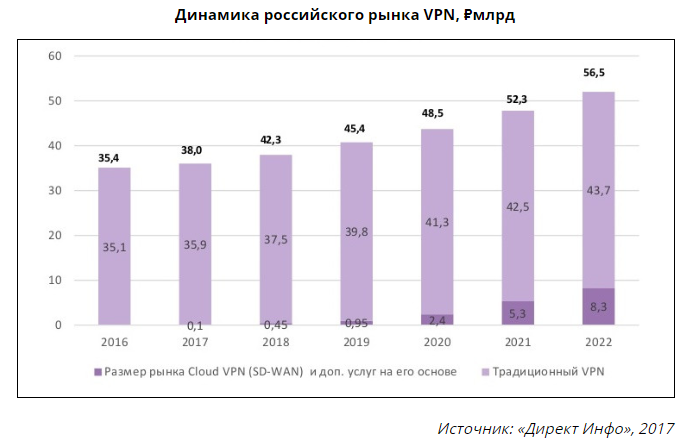 Throughout this period on 46-47% also 6-8% — on B2O, the services rendered to operators will fall on segments of B2B and B2G (services to commercial and state sectors respectively). 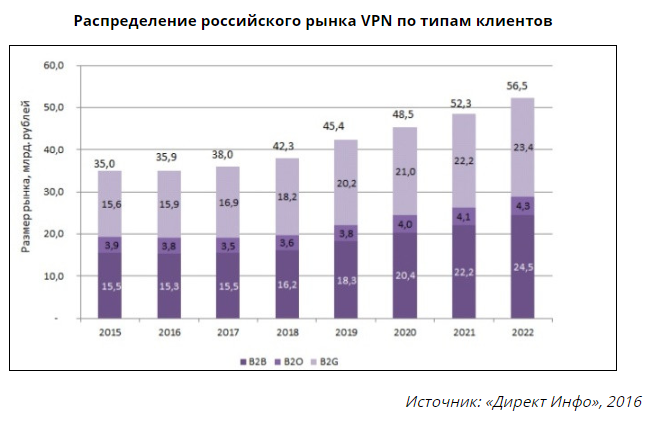 According to forecasts, on growth rates the Russian market of VPN will develop in general more slowly world, and its cloud part much quicker. In particular, analysts of Direkt Info explain these what in 2022 the commercial sector will exceed state on costs for virtual private networks.

In an operator segment the market will grow due to new high-speed connections in MPLS L2 Ethernet networks (for example, connections of DPCs), development of LTE and, as a result, increase in demand from mobile operators for expansion of trunk tanks of regional data networks. The operator market will also grow due to processes of migration from technologies of lease of channels on MPLS VPN.

In the market of corporate clients along with the general growth of level of penetration of VPN connected with consolidation by the enterprises of the distributed telecommunication networks, drivers of the market, according to experts of Direktinfo, there will be additional services based on virtual private networks:

The Direktinfo analytical company completed in the spring of 2012 the next stage of the research of the market of virtual private networks (VPN) which is regularly conducted since 2004 in Russia. By estimates of the company, the total amount of the market of the managed VPN of all types (MPLS VPN L2 and L3) was about 21.1 billion rubles in 2011. In comparison with 2010 it grew by 19%.

The Segment of VPN can conditionally be separated into two components: intraregional VPN (services are rendered in one locality or area) and interregional (the virtual private network integrating the offices of the companies located in the different cities and areas).

According to regular poll of large and medium-sized enterprises, scope level services of interregional VPN at this type of the enterprises was 5.4% (in 2010 — 4.5%), and intraregional VPN — 13% (in the 2010th — 12%). Growth rates of the customer base of services of VPN despite the crisis phenomena in economy for the last five years remain extremely high — more than 20% a year.

The state organizations — the largest consumers of services of VPN. 19% of all customer base of operators are the share of them. On the second place the financial sector (14%), on the third — trade, services and the processing productions (on 12% for each of these industries). Government institutions are in the lead on such indicator as a median number of ports on the company — 84 ports on one organization.

Among the companies — market leaders of interregional VPN — the operators who are actively working with government institutions. It is, first of all, Rostelecom (44% of the market on the total number of ports) and Synterra (18% of the market). B2G segment — the main driver of the market of interregional virtual private networks. In a total quantity of the involved ports about 48% are the share of the state consumers. The share of business users on this indicator slightly lower and makes 45%.

2010: Assessment of the market of VPN

Dynamics of growth of the market of VPN gradually decreases. Its participants give the estimates differing almost twice in October, 2011. According to a TTK, the annual size of the market of VPN is 11 billion rubles, from them about 5 billion rubles fall to the share of services for public authorities. "It is the growing market segment", – the vice president of a TTK – the head of the Trunk block Vitaly Kotov notes.

Rostelecom considers that the size of the market of services of VPN in Russia in 2010 was about 18 billion rubles, the forecast for 2011 – not less than 20 billion rubles. The Direkt INFO research company published data according to which the volume of the Russian market of the managed VPN (VPN L3) in 2010 equaled 10.6 billion rubles, and in 2011 can grow to 12.5 billion rubles.

Thus, the indicator of growth of the market of virtual private networks is in limits of 10-18% and is on average equal to 14.5%.

The demand of internetworking services of VPN for several years remains high. For example, for the last month the Federal Treasury, the Russian division of the European retail network re addressed this service : Store, Udmurtstat. The branch of the international company "Argus Payplayn Service" (APS) specializing in design and construction of pipelines organized the VPN network integrating the Moscow and Neftekamsk offices. The service is provided based on nodes of access of the TTK located in Ufa and Neftekamsk of the Republic of Bashkortostan. Capacity of the communication channel selected for the organization of network makes 10 Mbps. "At solving of tasks in design and construction of pipelines our company actively uses telecommunication technologies", – the head of information technology of FPÖ company Andrey Krivtsov noted.

Suppliers characterize demand differently. Vitaly Kotov considers that the market of VPN can be characterized as mature and saturated: "On the one hand, we observe decrease in market price of service, with another – insignificant increase in volume of consumption of service. In general today it is possible to call demand for services of VPN steady".

According to the associate director of department on product management of Rostelecom Pavel Averkin, the market of services of VPN is in a status of active growth. "It is caused as growth of economy in general and growth of large corporations, and development of the different information systems requiring coherence of different objects of corporate and state users, – he tells. – At the same time there is gradual partial substitution of services of lease of channels more modern and high-quality services of creation of virtual private networks that gives to services of VPN additional growth rates". The largest trunk operator of the country estimates the market position of VPN as leading.

The representative of "Tele2 (before Tele2 Russia AB, Tele2)" company Alexander Bakhorin calls VPN of one of the most demanded services in the telecommunication b2b market: "Growth of number of "mobile" employees, i.e. using remote access to corporate resources till 2016 will be 131%. At the same time the quantity of financial institutions and the telecom companies (they some of the largest users of VPN networks) in Russia are more, than in the USA and countries of Western Europe".

As the need for the organization of the distributed protected corporate networks is felt regionally by the distributed organizations, most of customers – the federal companies with the headquarters in Moscow. "80% of customers of service are the federal companies which central offices are in Moscow. From Moscow connection in corporate network of regional offices of the companies is generally performed", – Vitaly Kotov confirms.

However the number of federal customers nevertheless is limited, and perspectives are connected with regions. "Further growth of the market will be integrated to expansion of a branch network of the main consumers and to connection of segments of SME and SoHo. Demand, thus, forms not by the regional principle, and on concentration of localities with the population from 100-200 thousand people", – Alexander Bakhorin considers. "In certain regions, for example in Yekaterinburg demand is much higher than an average indicator over the country. According to us, the reason that Yekaterinburg dynamically developing city with favorable climate for business and opening of new representations and offices of the different companies", – Vladimir Pashchenko explains.