2019: Russia was included into ten the countries where most of all use VPN services

Russia was included into ten the countries where most of all use VPN services. The data of the Top10VPN portal published at the end of November, 2019 which specializes in a research of the corresponding market demonstrate to it.

Experts analyzed about 300 VPN-applications placed in Google Play and App Store. The research covered 73 countries and was conducted within 12 months — from October, 2018 to September of the 2019th.

For this interval of time users downloaded more than 480 million VPN-applications worldwide that is 54% more, than the previous year when the amount of loadings was measured by 311 million.

The most part of installations of such software — 75% of a total quantity — are the share of owners of Android devices. They downloaded 358.3 million applications allowing to bypass blocking of the websites. Owners of iPhone and tablets made 121.9 million loadings.

With the greatest popularity of VPN services Indonesia where for a 12-month period locals downloaded about 75.5 million mobile VPN-applications that for 111% exceeds an indicator of year prescription is called the country.

Also got into top three the USA and India where 74.6 and 57 million downloads of the similar software respectively are recorded. The Russian users in a year downloaded 10.9 million VPN-applications that is 19% more than rather 12-month period which end fell on September, 2018.


Also follows from the report of Top10VPN that 84.3% of total the number of loadings of VPN-applications are the share of free programs, and among users the TurboVPN program which was downloaded by 51.3 million times enjoys the greatest popularity.[1] 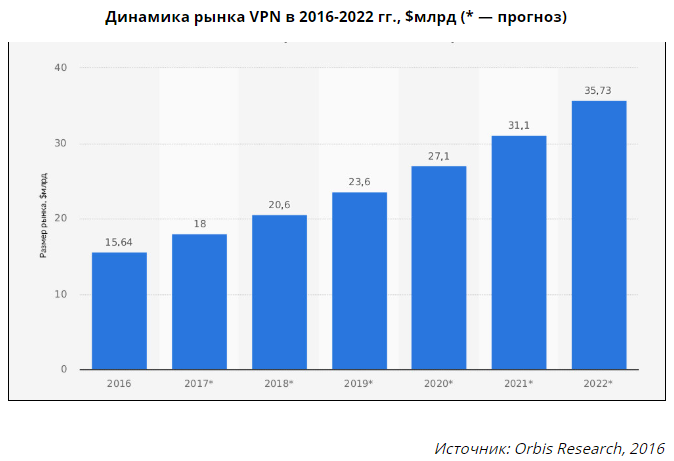 Geographically North America of which it is the share, by different estimates, 30-50% of the world market will remain the major market till 2026, in the general opinion. And further analysts do not state the reasons for which provision can significantly change. On the second place the Pacific Rim, on the third — Europe.

Certainly, the fashion on cloud services could not but affect the market of VPN. More and more large companies invest in appropriate technologies. Among the main players of the market analysts call Array Network, Cisco Systems, Virtela, Contemporary Controls, Oracle, Cohesive Networks (all — the USA), the Chinese Huawei and Robustel, NCP engineering (Germany), Singtel (Singapore). Also leaders of the cloud market got the VPN: Google, Microsoft and Amazon Web Services. 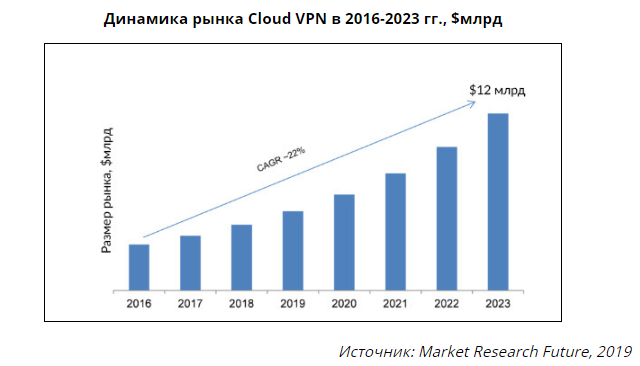 Geographical distribution in the market of cloud VPN same, as well as in the market of "normal": North America (more than 31% according to IndustryArc are the share of it) is in the lead, further there are a Pacific Rim and Europe.

Analysts explain the advancing growth of cloud VPN, in particular, with transition to clouds of the companies of small and medium business which want to receive all services from a cloud, including — and on security of communications. And also increasing application of means of the intercomputer interaction.