CNews is the largest edition in the field of high technologies in Russia and the CIS countries. The website CNews.ru was created in 2000 based on a news feed of "Hi-Tech News" of RIA of RosBusinessConsulting and quickly purchased recognition of professionals of IT of the industry and wide reader's audience.

Specialization of CNews — the operational news and analytical materials of the world of high technologies lighting a status of the Russian and foreign markets of a computer hardware, the software, informatization and automation, e-commerce and telecommunications, the game industry. In the field of attention of CNews technology innovations, interesting projects, financial side of business of the IT companies, trends of development of the industry, the last scientific developments get.

On September 30, 2019 attendance of CNews.ru reached a new record high – 275 thousand people a day. The number of visits on the portal in a month in September, according to " Yandex.metrics ", also was record – 3.31 million[1].

2019: The Federation Council subscribes to the CNews magazine

At the beginning of 2019 RBC found out what printed media write out in the Russian President Administration, the Government and parliament of Russia. The number of media on which subscribed in the upper house included the edition about high technologies of CNews. [2]

2016: RBC was offered for sale by the CNews portal for $1 million

The RBC holding offered for sale of internet mass-media of CNews (the legal person of Sinyyus.Py LLC) who specializes in covering of events in the field of telecommunications, information technologies and the software. Izvestia was reported about it by several sources familiar with plans of the company. The press service of RBC confirmed this information. The interlocutor of Izvestia told that the investors interested in purchase of the edition already are, but about the one who are they, did not begin to speak. Investors consider CNews as the product, known in the market, which is able to earn money. At the same time the cost of sale of this asset quite low — about $1 million. Finam Group considers that it is fair value[3].

The consolidation R&D, Games and Soft based on ZOOM.CNews

According to TNS, the monthly audience of CNews.ru in May, 2014 made 1.89 million people. A median number of readers in day of 116 thousand people. 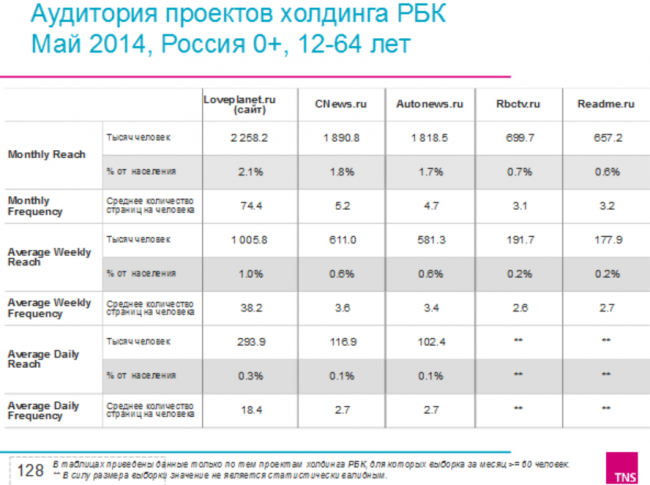 2012: An interview/podcast of the Chief Editor about history and development of the edition

In the Runetologiya program the Chief Editor of CNews Maxim Kazak told about the history of creation of the edition, about the market of specialized media in terms of business and in terms of journalism, about perspectives of the Russian IT industry, about CNews FORUM, about how CNews.ru from within and also about many other is arranged.

In 2010 the edition showed growth on all key indicators.


The daily audience of CNews makes 150 thousand, monthly – 1.6 million people. A bright indicator of the authority of CNews is the index of citing materials of the edition on the Internet. According to "Yandex", CNews is among leaders of Runet in this indicator, remaining in this list to the only specialized media among socioeconomic editions.


After a pause in 2008-2009 the editorial office of the edition grows again. In a command of CNews today about 100 people. Increase in number of authors, editors, analysts gave the chance to increase number of materials.

The CNews Analytics agency for the same period prepared 23 ratings and 13 state-of-the-art reviews. 316 articles were issued, growth of their number in comparison with 2009 was 39%. The agency conducts researches for the benefit of large government and commercial structures.

The ZOOM.CNews project published last year about 300 articles, reviews and tests. Editors of the portal the first in Russia tested 20 devices. Readers of ZOOM.CNews could get acquainted with the Apple iPad tablet already next day after its emergence in the American retail.

The paper magazine CNews became the most popular edition on number of the written-out copies in the profile ministry - the Ministry of Telecom and Mass Communications. Besides, the editorial office made the decision to open free access to the PDF versions of all numbers.

A new boost was received by the SOFT.CNews project – the directory of the software was updated, the feature for purchase of software was added.

The agency of business communications CNews Conferences in 2010 held 36 events – conferences and round tables. Total number of their participants exceeded 3500 people. Besides, in November, 2010 CNews FORUM – the largest Russian action devoted to information technologies took place. About 1000 people among whom there are officials responsible for development of IT in a public sector, CIO of the largest Russian enterprises, heads of the IT companies became participants of a forum.

Content outsourcing became the new direction which gained noticeable development in 2010. CNews prepares information materials not only for own projects, but also for big commercial and state customers.

The 2010th became record and by the size of the prizes which got to our readers: one person became the owner of the new Ford Focus car, tens won notebooks, two received the iPad tablet computers, several communicators and a set of other valuable presents were played.

In 2011 we will begin to use new forms of interaction with audience which will allow CNews to remain the undisputed leader of the market.