Cathedral of Christ the Saviour

For October, 2012 the temple complex of the Cathedral of Christ the Saviour and the territory belong to the city of Moscow. In 2004 they are transferred by the order of the mayor to the control non-profit organization – to Fund of the Cathedral of Christ the Saviour. The order ordered to fund to sign the agreement on sharing of premises of the temple with the Patriarchal farmstead. But by 2012 only 7% of the areas as a result are transferred to a farmstead.

Subsidies from Moscow "on maintenance of a status of the temple": from January, 2010 to September, 2012 the fund received 698.2 million rubles.

In June, 2020 the Government of Moscow signed one more contract for  reconstruction of the Cathedral of Christ the Saviour. The cost of the contract was 927 million rubles.

EKS company  — only, submitted   the auction participation application became the contractor, according to the agreement signed on June 17. Earlier it already  received  the similar contract for  1.6 billion rubles, its execution is planned by  the end of August.

For 2012 at Fund of the Cathedral of Christ the Saviour it is possible to rent temple premises for corporate actions:

For 2012 except actually temple in the territory the car wash, the dining room, a dry-cleaner laundry, refectory chamber, mounting, car service, paid a set of trade stalls, the paid underground parking on 305 cars are located. In most cases the Fund of the Cathedral of Christ the Saviour acts as the seller of services.

The annual turnover of HHS Fund together with three "daughters" does not exceed 40 million rub[2] at this time[2].

For 2012 if to look from Volhonka, then on the right and to the left of the temple two benches – souvenir and jewelry are visible. In the first business is done by Vrata-1 LLC, in the second which is called Chest, – Vrata-2 LLC. In SPARK it is possible to find some more Gate. These are the "Gate-3" registered to the address of the Cathedral of Christ the Saviour, "Gate-5" (trade in pharmaceutics, cosmetics and perfumery) and "Gate-4" (accounting and audit) and churches of the Hieromartyr Kliment registered to the address on Pyatnitskaya "Gate-8" (trade in jewelry)[1].

In the Cathedral of Christ the Saviour and church of the Hieromartyr Kliment about Gate nothing was heard: "You were mistaken, it is the temple".

Almost all (except for one Ltd company) Alexey Vishnyak is registered as the co-owner of all Gate and the CEO. The popularity to this person was brought in September by TV program Mamontov's Arcadia "Provokers-2". In it Vishnyak provided as the former adviser of Boris Berezovsky made the assumption that behind the stock of Pussy Riot in the temple there could be Berezovsky.

In an interview to Dozhd TV channel Berezovsky remembered that he is familiar with Vishnyak long ago: once financed the orthodox newspaper which that headed. Then Vishnyak met him in Great Britain and Israel. Berezovsky says that he consulted at Vishnyak concerning bible terminology, in particular when wrote the letter to the patriarch Kirill.

Vishnyak in the blog on Echo of Moscow confirmed that he is close familiar with Berezovsky from the 1990th and worked as "his adviser for religious questions". He also reported that he directs Preobrazheniye public organization.

It was not succeeded find Transformation as which head Vishnyak would be registered in SPARK. But there the Fund of support of veterans of bodies of traffic police-GAI which founder and the head it appears was detected. This fund is registered to the address of the Cathedral of Christ the Saviour too.


Berezovsky on Rain remembered that Vishnyak at meetings with it "spoke about the close ties with the patriarch Kirill<...> more precisely, with high ranks in Russian Orthodox Church all the time<...>".

SPARK shows one thing which can be interesting to those who saw an opportunity for business in church and law-enforcement communications of Vishnyak. Vishnyak establishes firms with the same name, but different co-owners. So in "Gate-1" and "Gate-2" originally 51% belonged to the Bashkir entrepreneur Ilshat Niyazov. But this Gate, it seems, did not bring Niyazov to the temple. Vishnyak in May, 2009 submitted against him a claim to arbitration court for agreement cancelation of purchase and sale of a share in "Gate-1" in connection with "fundamental breach of the agreement". In reply Niyazov entered 6120 rub which had to pay according to the purchase and sale agreement for 51%, and reported to court that he does not wish to argue with Vishnyak because of 6000 rub as "made considerable money in society". The claim to Vishnyak it was refused. In December, 2009 it registered "Gate-1" already to the address of the Cathedral of Christ the Saviour, they in 2012 also trade in souvenirs in the territory of the temple. Niyazov has no relation to them.

Traffic police funds was two too. And "Gate-8" of two, both firms are registered to the address of church of the Hieromartyr Kliment, both are for jewelry trade, in both – the CEO Vishnyak.

Vedomosti contacted Vishnyak. He asked to call back and ceased to answer phone.

"Better than Felix Komarov nobody will tell [about this business]", – the businesswoman Veronika Lyudmirskaya whose share in Gate different one after another fluctuates from 6 to 25% says.

The Russian entrepreneur and the owner of the American green card Felix Komarov told Vedomosti that he invested in business at temples about $1 million. Now it and his partner – to the citizen of Germany Igor Rabinovich possess a half of "Gate-2" (a bench Chest at the Cathedral of Christ the Saviour, see a photo) and a half of Pravoslavny yuvelirny dom LLC which owns a share in "Gate-8".


According to Komarov, in this business he was attracted by "not desire to be enriched, and charity":


Mosquitoes it is convinced that this good case.


"Chest" is open about a year, Mosquitoes calls it "a pilot project at the main temple of the country". It likes the idea of "The Orthodox Christian of the jewelry house":


In Komarov's plans – to open at churches also "national drugstores" where the prices will be "human" (in November, 2011 pharmaceutical "Gate-3" and "Gate-5" are registered).

Earlier Komarov was engaged in other business. According to SPARK, it, for example, was a co-owner of one of the central casinos of Moscow – Europe club at Strastnoy Boulevard. Casino as it was reported, the authoritative entrepreneur Alimzhan Tokhtakhunov controlled.

Komarov says that he "owned Russian World gallery on 5th Avenue, "museum mile" of New York. And that he is perfectly familiar with Rudi Giuliani (the former mayor of New York), with Ernst Neizvestny and other famous sculptors and artists.

FBI tried to connect Komarov with Vyacheslav Ivankov. FBI had information that Komarov allegedly launders money for Ivankov, according to court who considered Komarov's claim to one of the American publishing houses.

Exhibition of icons and Igor Vozyakov

One more person whom Vishnyak invited to the Cathedral of Christ the Saviour, – Igor Vozyakov; his relative Dmitry Vozyakov is registered as the owner of Dyyurisoft LLC who possesses 35% in "Gate-4" (accounting and audit).

In oil business Vozyakov is known as the manager of Lukoil (headed management of strategic marketing till 1999), and then as the deputy vice president of Transneft (approximately till 2003-2004). "Vigorous, enterprising young man", – the former colleague remembers Vozyakov.

And in the company of Vozyakov know as the passionate collector and the founder of the museum "House of an Icon" on Spiridonovka.


Collecting of icons and the museum are far from commerce at what here "Gate-4" with their accounting? In the fall of 2012 Vishnyak addressed the museum with the offer to organize time exhibitions in bypass gallery of the Cathedral of Christ the Saviour, Vozyakov tells. This offer interested him.


But further case did not go: it became clear, "that conditions and perspectives of museum activity did not meet my expectations", Vozyakov accurately formulates:


2008: Rosimushchestvo rents places on the parking for 1.2 million rub

The fund receives money and according to government contracts. SPARK shows, for example, that in 2008 parking spaces at it were rented by the Russian fund of federal property for 1.2 million rubles.

1931: Demolition of the temple 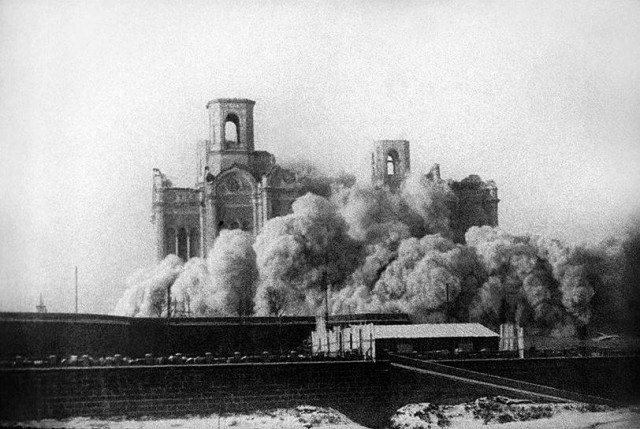 Demolition of the Cathedral of Christ the Saviour, 1931.