At the beginning of July, 2020 announced Daimler acquisition of a 3% share in the Chinese producer of the Farasis Energy storage batteries for $127 million. It is one more sign that the German carmaker is going to increase production of electric vehicles. After closing of the transaction Daimler will appoint in the supervisory board of Farasis of the chief operating officer of the Mercedes brand Markus Schäfer. Read more here.

On April 21, 2020 producers of trucks Daimler Truck (division of Daimler) and Volvo Group  agreed about cooperation in the development area of hydrogen engines. For this purpose the German and Swedish companies created Mercedes-Benz Fuel Cell joint venture which head office will be in Naberna (Germany). Read more here.

Daimler: construct business in the field of the robotaxi it is unreal

In the middle of November, 2019 it became known that Daimler reviewed the expectations concerning a potential business model of pilotless taxi. The chief executive of the company of Ola Kaellenius reported about it. Read more here.

Testing of the pilotless Mercedes trucks on public roads

At the beginning of September, 2019 Daimler concern which releases cars under the name of Mercedes-Benz and Torc Robotics company there began tests of the automated trucks with SAE Level 4 technology on public roads. The first routes pass on highways in the southwest of Virginia where there is Torc Robotics headquarters.

Work of pilotless trucks will be controlled by engineers and highly skilled drivers. All drivers estimating safety of new trucks are specially trained in dynamics of vehicles and work with automated systems. Pilotless trucks came out to public roads after several months of versatile tests and check of security on the isolated route. 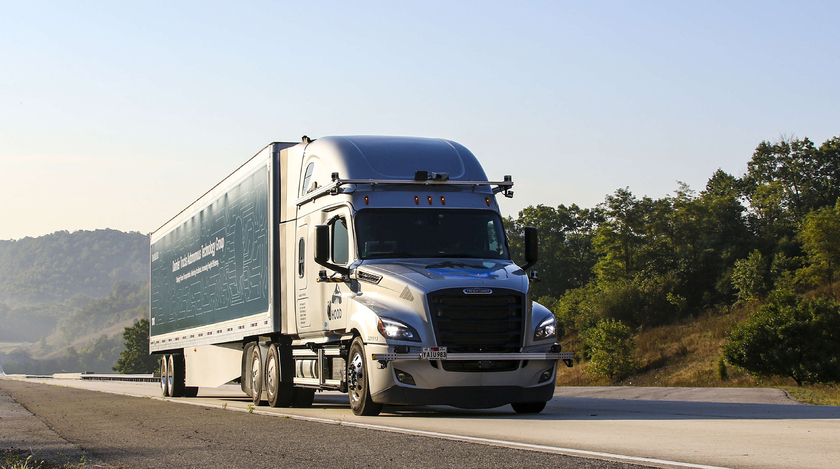 Trucks support the fourth level of autonomy — when participation of the driver is minimum. Does not disclose other technical details about the new Daimler trucks. The company tests the pilotless truck together with Torc Robotics which purchased in March, 2019. Torc founded in 2005 is engaged in development of sensors and software for autonomous transport. The producer of trucks integrated all work in the field of the automated driving in the global organization which headquarters is located in Bleksburg and Portland (USA) and also in Stuttgart (Germany).

Daimler Trucks North America (DTNA) will focus on further development of technology of the automated driving and integration of pilotless heavy trucks into work of other enterprises. The DTNA command already works on truck chassis which are ideal for the safe high-automated driving and also creates the infrastructure necessary for operational testing of primary options.[1]

On July 23, 2019 the Chinese car maker BAIC Group announced acquisition of a 5 percent share in the Daimler concern making cars under the name of Mercedes-Benz.

As reported on the website of BAIC, the company directly takes 2.48% of shares of Daimler and also acquired the right to acquisition of the additional voting rights equal to 2.52% of capital stock German the auto giant. 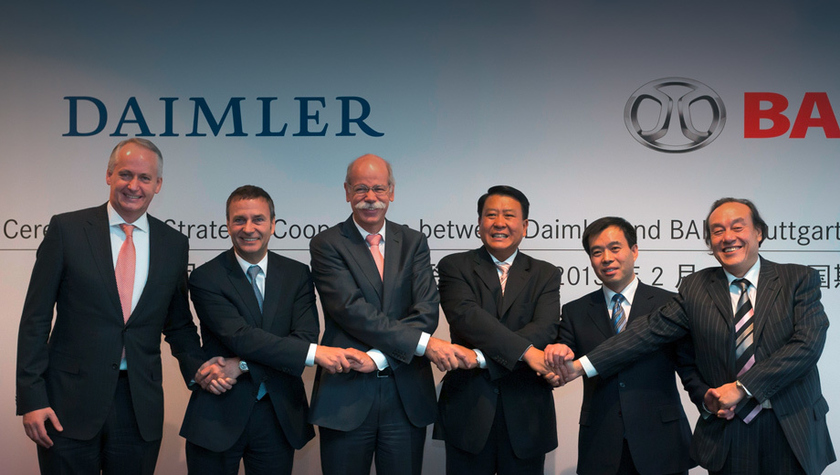 The Chinese concern BAIC acquires 5% of shares of Daimler

By July 23, 2019 Daimler owns about 9.6% of the stocks BAIC Motor (enters into the BAIC group) and also about 3% in the BAIC BluePark New Energy Technology company releasing electric vehicles for the Chinese market. Since 2013 the representative of Daimler is included into Board of Directors of BAIC Motor.

Besides, BAIC and Daimler have several joint ventures. At the Beijing Benz Automotive plant in Beijing release the extended A-Class, GLA, GLC, C-Class and E-Class sedan, and the Beijing Foton Daimler Automotive enterprise is engaged in assembly of commercial trucks. In addition the companies have the general research and development center.

The Chinese market for Daimler is one of the most important. In 2018 the company sold more than 692 thousand cars there.

Sale of a 5 percent share of Daimler will strengthen cooperation with BAIC. The main emphasis in joint work will be put on creation of electric vehicles and unmanned vehicles.

For Daimler partnership will become an opportunity to reduce cost value of development and production of rechargeable batteries. High cost at the moment slows down large-scale production of electrical machines, says the European car maker.

After the declaration of the transaction from the BAIC stock of Daimler grew in price for 3%.[2]

Purchase of software developer for pilotless cars of Torc Robotics

At the end of March, 2019 the Daimler Trucks company, the world's largest producer of trucks (a brand of Mercedes-Benz), announced acquisition of a controlling stake of software developer for pilotless cars of Torc Robotics. Read more here.

At the beginning of September, 2018 the Amazon company announced purchase at Mercedes-Benz about 20 thousand cars which will be used in new service of the American Internet company — Delivery Service Partner. Read more here.

Deception in tests for harmful emissions

In February, 2018 it became known of use of Daimler of the special software by means of which the company took tests for harmful emissions in Mercedes-Benz cars. The opened deception led to falling of quotations of the German concern.

According to the Bild am Sonntag newspaper, referring to the investigation made in the USA, in machines of Mercedes-Benz the program under name Bit15 which among other things turned off function of cleaning of exhausts after 26 km of a trip was installed. After cleaning shutdown the level of harmful emissions exceeded admissible regulation by  10  times. 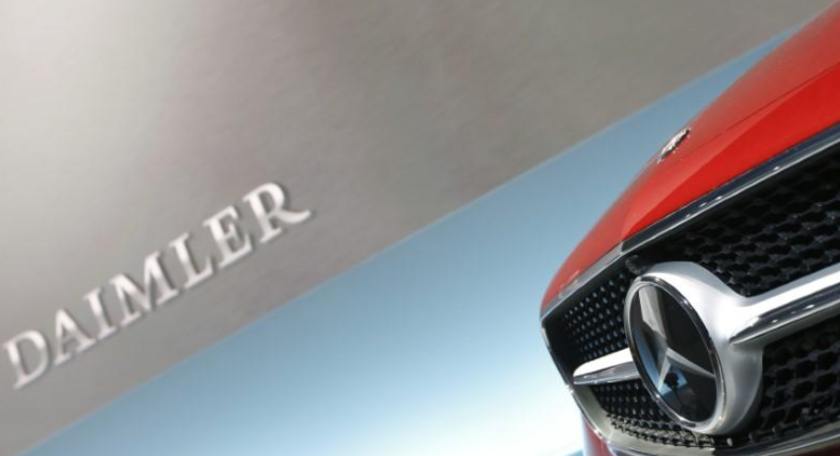 Thanks to this car maker it was possible to pass tests for emissions from diesel engines. Daimler abstains from comments about the documents which appeared in media and only say that the company fully cooperates with the American authorities. It is noted that details of this interaction cannot be disclosed according to the agreement with the American Ministry of Justice.


The Bild am Sonntag edition, in addition to results of investigation, also refers to    the electronic correspondence available at it between engineers with  questions of  legality of the similar software.

After there was information on fraud in law of Daimler, stocks of the company declined. On February 19, 2018 rates of decrease reached 2.4%.

If intentions of Daimler on understating of emissions of noxious gases are officially proved, then numerous claims and large penalties can wait for the company. Earlier in the center of similar scandal there was a Volkswagen concern which was as a result forced to withdraw a huge number of machines and also to pay about $30 billion for penalties and repair of vehicles.[3]

Testing of drones for the goods delivery

In November, 2017 it became known of a successful completion of the large-scale program of Mercedes-Benz for testing of the UAV for delivery of daily goods in Switzerland. 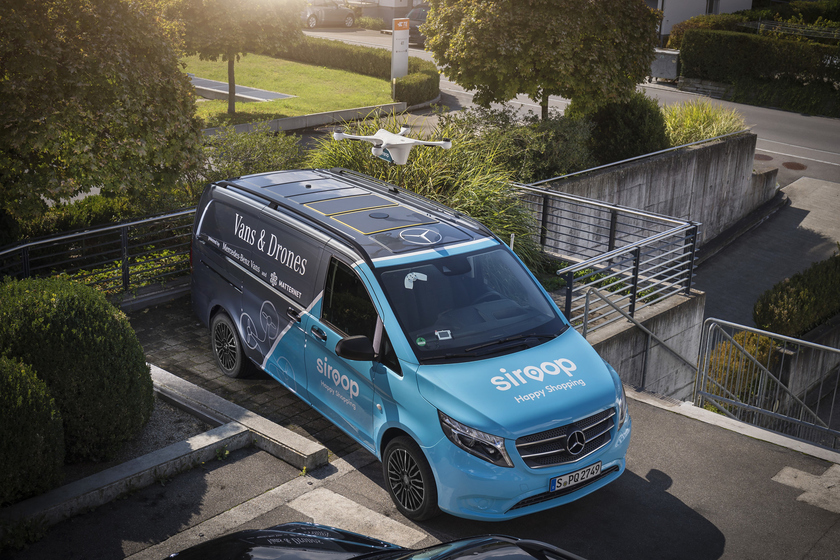 The Mercedes van with the specialized platform for landing of quadcopters

The program lasted three weeks, from September 25 to October 13, 2017, the press service of Daimler AG carmaker, parent company Mercedes-Benz reports. During this time drones executed 100 flights and delivered small purchases to the specialized Mercedes vans in different parts of Zurich. Within experimental service the high level of security was shown, and the concern is going to expand flights in 2018, Bloomberg tells.[4]

Testing was held in partnership with the American developer of the pilotless Matternet systems and the Swiss online retailer Siroop. Drones were used for delivery of small purchases from online store, in particular, of products of the Black & Blaze Coffee Roasting Co. company specializing in sale of natural coffee. In total by air from Mercedes about 50 buyers used service of express delivery.

The vans involved in the project with the specialized platform for landing of quadcopters on a roof were located in four fixed city points. To them UAVs with a load also went, flying by distance up to 17 km. Having delivered sending, UAVs came back, and final, small segment of a way to the house of the client was executed by the courier on the car.


He added that the company sees big perspectives for service and is going to expand it, having covered new scopes.[5]

Opening of the development center in Israel

In November, 2017  the Daimler concern  opened a research and development center  of Mercedes-Benz  in Tel Aviv. The role of this project, as noted, will consist in consolidation of four largest trends influencing automotive industry: cloud automobile services, autonomous vehicles, ridesharing and electric vehicles.

By the time of the beginning of work in the Israeli center which main attention is concentrated on digital technologies and mobile services for cars 15 employees work, in 2018 their number will grow to 25. 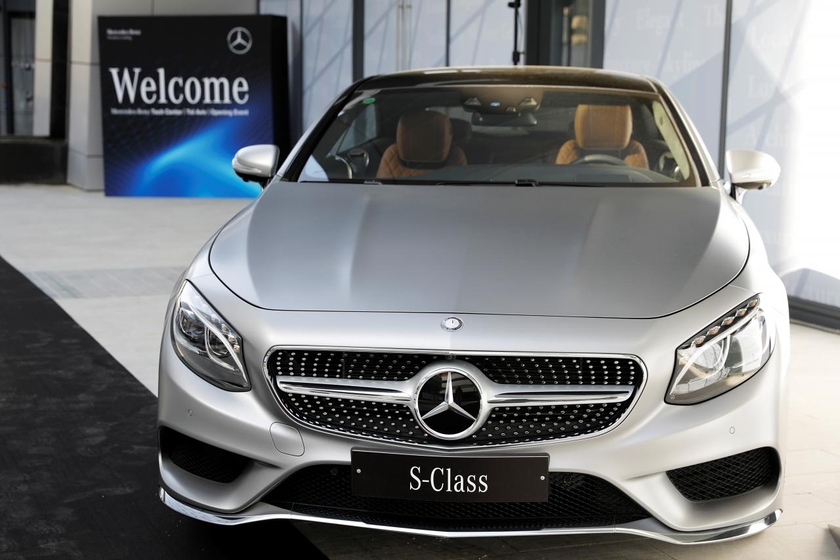 Before Daimler already invested in the Israeli companies specializing in development of automobile technologies. So, in September, 2017 StoreDot startup developing the fast-charged batteries received from the owner of a brand of Mercedes-Benz financing in the amount of  $60 million. Then became Daimler the strategic partner of StoreDot to accelerate implementation of FlashBattery technology in the electric vehicles.

Besides, the German auto giant developed the EQ Ready application started in October, 2017 together with the Israeli company Anagog. It helps drivers to resolve an issue of whether it makes to them sense to pass to the electric or hybrid car.

According to the chairman of the board of Daimler Dieter Zetsche (Dieter Zetsche), in addition to carrying out own research and development in Tel Aviv, the German car maker will aim at partnership with the Israeli startups, and to invest in certain cases in them or to purchase technologies.[6]

As notes Reuters agency, by November, 2017 in Israel there are about 450 startups working on different automobile technologies — from solutions for ensuring cyber security before developments in the field of machine vision.

Use of hydrogen in data centers

In November, 2017 announced Daimler intentions to use hydrogen for a power supply of data centers. As partners of the German carmaker releasing cars under the name of Mercedes-Benz in this project the Hewlett Packard Enterprise (HPE) IT corporation and also the American state organization National Renewable Energy Laboratory and the developer of energy technologies Power Innovations International act.

It is supposed that fuel elements which Daimler developed for the machines will be applied in DPCs in case of too strong energy consumption or interruption. And  unlike  back supply from  accumulators, in  a case with  fuel elements there are  no restrictions  — the cell works  until there is a hydrogen. 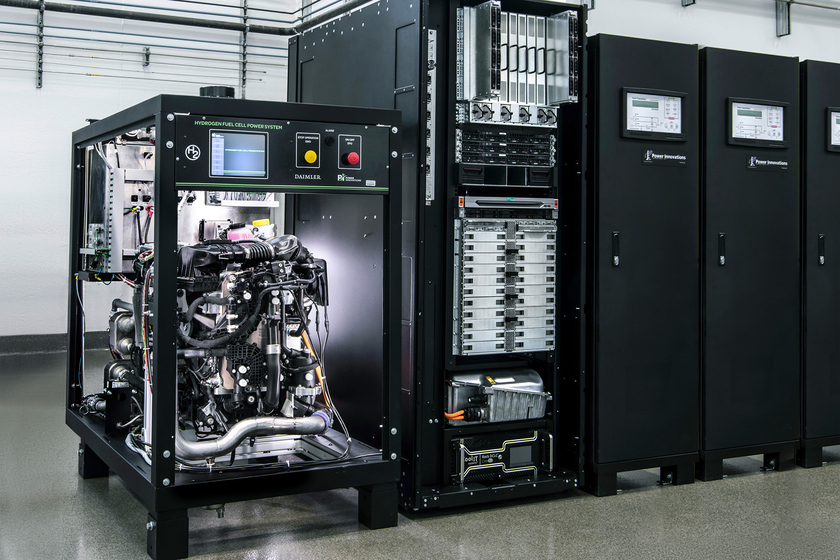 Hydrogen supply system for data centers, a photo of Daimler

Thus, fuel elements will be not the main sources of energy in data processing centers, and reserve for the generators working at energy of the sun and wind.

To advantage of the hydrogen fuel cell generator developers carried the compact sizes, high reliability, the low level of harmful emissions and a small shumovydeleniye in comparison with diesel and petrol units.

The companies work on  implementing hydrogen cells in  the existing IT systems. It can be of great importance for  emergence  in the future of environmentally friendly data centers. Daimler notes that the main problems on the way of implementation of the hydrogen systems in DPCs are high cost of technology because of its weak distribution and complexity in creation of modular architecture.

The pilot version of development of Daimler and her partners was submitted at the SuperComputing 2017 conference  which took place from November 13 to November 17 in Denver (USA). The companies promise to start project implementation in 2018.[7]