Company
Electrical equipment and microelectronics
Since 2016
USA
Round Rock

The company founded in 1984 specializing in assembly of desktop computers became one of the largest corporations in the world market of information technologies over time.

Also the investment fund is a part of the company:

In 2020 financial year closed on January 31 the 2020th calendar revenue of Dell reached $92.15 billion that for 2% exceeds value of year prescription.

In the division of Dell Infrastructure Solutions Group specializing in servers, network devices and storage systems in 2020 to a fiscal year revenue in the amount of $33.97 billion was recorded that is 7% less, than the previous year. 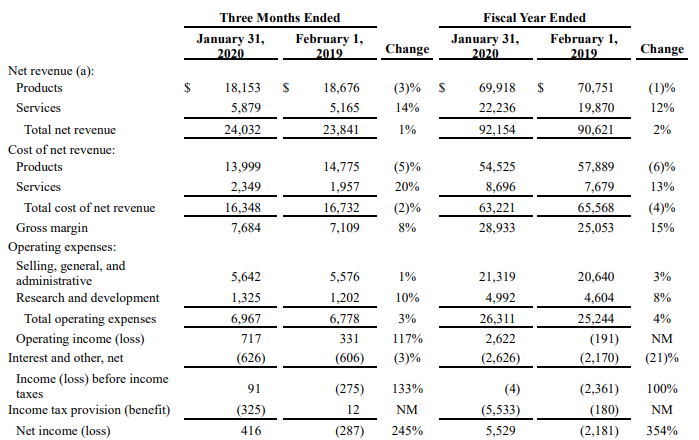 Annual sales of servers and network equipment of Dell made $17.13 billion that is 14% less year on year. Income in the market of storage systems slightly increased and was $16.84 billion.

Connected by Dell drop in sales of servers with the Chinese market where sale of the equipment was reduced by 35%, and it even before the outbreak of a coronavirus of COVID-19.

Computer business which supervises division of Dell Client Solutions Group in 2020 financial year received revenue in $45.84 billion — 6% more, than the previous year. Income from notebooks and desktops in the corporate sector increased by 11% in comparison year by year (to $34.28 billion). In consumer segment turnover was reduced by 6% and reached $11.56 billion.

The net profit of Dell in 2020 reporting year was equal to $5.53 billion whereas in the 2019th the company registered net losses at the level of $2.18 billion.

In computer division profit increased from $1.96 billion in 2019 reporting year to $3.14 billion a year later. In server business profit decreased by 4% to $4 billion.

After the publication of financial statements of a stock of Dell fell in price by 10%, up to $39.21 that never was from the moment of return of the company to the exchange. Quotations fell because of the weak growth of revenue of IT vendor.

Absorption and asset sale of Dell