The chairman of the board of Gazprom Media Mikhail Lesin said in November, 2014 at a meeting with staff of Echo of Moscow that the radio station in 2015 will become unprofitable.

"I do not want to discuss myths on the fact that you successful, commercially profitable radio station. All this word play. Look at the budget for the next year - there minus", - Lesin Mikhail, the Chairman of the board of Gazprom Media told, said in November, 2014 at a meeting with staff of Echo of Moscow. "You today - radio station 55+. Your audience since 1991 also grew old, as well as radio station. It is the truth supported with the researches TNS. The share of young people is very small. And it is the hardest problem for the advertizing market. 70% of the budget of Echo form from dietary supplements and other drugs. The advertiser does not want to buy stock on Echo of Moscow, - Lesin added.

2019: Venediktov's re-election by the editor-in-chief 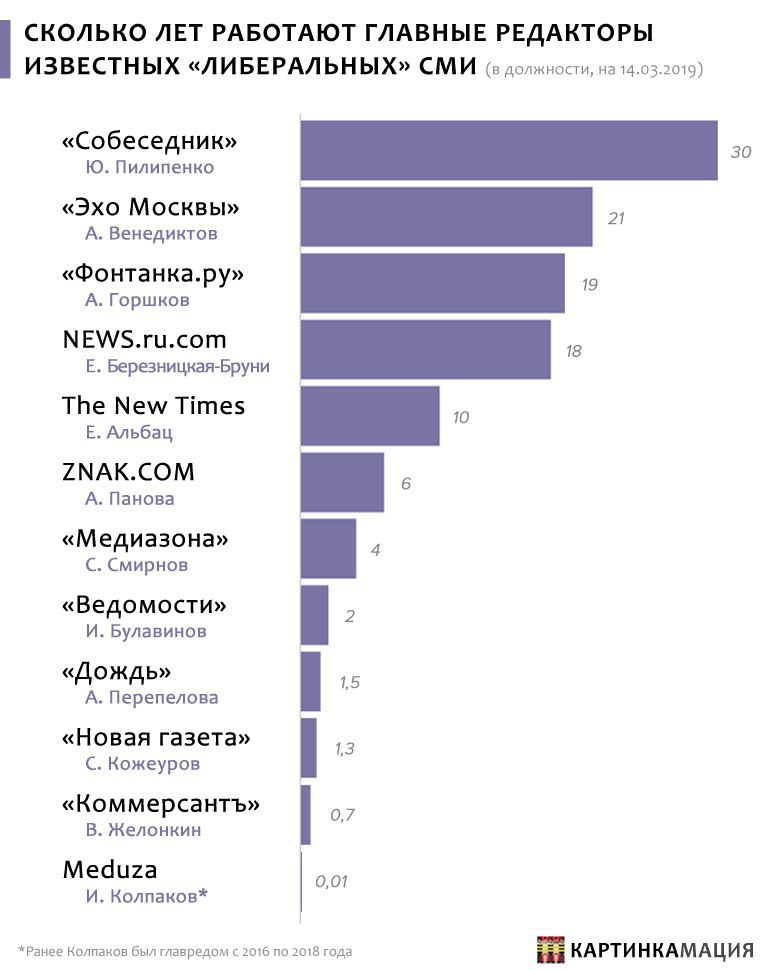 Change of the CEO

On February 18, 2014 powers of Yury Fedutinov holding the CEO's post Echo of Moscow since 1992 were ahead of schedule stopped. Its place was taken by the former top manager of radio "Voice of Russia" Ekaterina Pavlova[1].

Representatives of Gazprom Media explained change of the CEO by exclusively economic reasons. Fedutinov noted that it, perhaps, a part of the preparing restructuring of all holding. Nevertheless, in an interview to Lenta.ru the Chief Editor of Echo of Moscow Alexey Venediktov called sudden resignation of Fedutinov "the political solution". According to Venediktov, several facts testify to it at once: Echo of Moscow is the profitable project, the reasons of resignation of Yury Fedutinov were not stated, and did not provide to minority shareholders of radio station information on the new CEO. As Venediktov noted lawyers of Echo check legality of actions of Gazprom Media.

Liquidation of separate service of sales

On February 19, 2014 it became known that advertizing on Echo of Moscow will be on sale in the general packet with advertizing on other radio of ProfMedia holding. The Vedomosti newspaper reports about it. Earlier own sales department of radio station dealt with issues of advertizing placement on Echo.

The decision on merge of ProfMedia and Echo of Moscow advertizing departments was accepted company management of Gazprom Media. "The Gazprom Media controls all assets of ProfMedia and also is the largest shareholder of Echo (the holding possesses 66 percent of shares of radio station). Creation of a single batch which would include all advertizing offers on Echo to Vedomosti was confirmed by the First Deputy CEO of Gazprom Media Vladimir Shemyakin and the president of broadcasting corporation "ProfMedia" Yury Kostin.

According to Shemyakin, need "the change of the CEO of Echo of Moscow which happened earlier was caused build in "Echo' uniform structure of holding".

Echo of Moscow will sell content to TV channels

The Echo of Moscow radio station is going to create the company which will make content for TV channels of Russia and the abroad. The project can be started in 2015.

ITAR-TASS the Chief Editor of radio station Alexey Venediktov reported about it. He explained that the project on initial stage of development. In plans of radio station – to create production-studio which will sell content to the Russian and foreign TV channels. "Not just the television is teleradio. The question is in how to televizirovat radio broadcast content that people perceived it as television, a visual product", - Alexey Venediktov noted.

Gazprom Media refused to sell the share in Echo of Moscow

In August, 2014 it became known that the Gazprom Media media holding refused to sell the share in Echo of Moscow radio station (66%) to minority shareholders.

The Chief Editor and the co-owner of Echo of Moscow Alexey Venediktov reported that on August 6 he learned about it at a meeting with the chairman of the board of Gazprom Media Mikhail Lesin at which the question of the redemption of radio station was brought up.

"Mikhail Lesin as the head of the majority shareholder, told that he does not intend to sell to Gazprom Media the share in Echo of Moscow. The meeting had informal character therefore we did not receive formal notices on a request for search of the appraiser yet" — Venediktov told ITAR-TASS.

Earlier it was reported that minority shareholders of Echo of Moscow are going to carry out the assessment of the company for the subsequent redemption of securities from Gazprom Media.

For August, 2014 minority shareholders are journalists of radio station and the entrepreneur Vladimir Gusinsky, own nearly 34% of Echo of Moscow. Gazprom Media possesses about 66% of radio station.

"The echo of St. Petersburg" will stop broadcasting

The CEO of Echo of Moscow radio station Mikhail Dyomin decided to revoke the license from Echo of St. Petersburg. On Twitter the assistant to the Chief Editor of Echo Lesya Ryabtseva reported about it in February, 2015. In confirmation of the words Ryabtseva published the document in which it is said that on March 16, 2015 — the last day when the St. Petersburg division owns the license for broadcasting in the frequency of 91.5 MHz.

The Chief Editor of Echo of Moscow Alexey Venediktov confirmed to Interfax that Dyomin really sent the letter on agreement cancelation with Musical Trading Station company which performs broadcasting of Echo of St. Petersburg. He noted that the CEO already looks for other company which could perform broadcasting of radio station in the Northern Capital.

"I do not know what will become with employees and what will become with radio station. I want to hope that within that month, will not become effective Dyomin's solution yet, the reason will prevail. I and Echo of Moscow we want that the station and journalists continued work. We have a mass of plans how to make radio station it is better" — Bychkova told. To a position of the editor-in-chief it was appointed at the end of January, 2015.

On January 20 Dyomin said that the St. Petersburg station is unprofitable because of what the capital management insisted on the candidate for the CEO's post — to Svetlana Sakharova, the St. Petersburg minority shareholders tried to obtain this position for Sergey Nedovodin. Powers of the current CEO of St. Petersburg Echo Yury Fedutinov expire on February 19, 2015.

Dyomin said that if compromise is not reached, Echo of Moscow will not begin to prolong the franchasing agreement with "A musical trading station".

Mikhail Dyomin came to management of radio station at the end of December, 2014 after the post of the chairman of the board of Gazprom of Media holding was held by Dmitry Chernyshenko. Together they were engaged in preparation of the Olympic Games in Sochi: Chernyshenko was President of the Organizing Committee "Sochi-2014", and Dyomin — the PR-director.