"ExoAtlet" is the Russian producer of medical exoskeletons for rehabilitation. Since 2014 the company the resident Skolkovo. In it the collective having experience of research and developmental activity in scientific research institute of mechanics of MSU is brought together.

2018: Investments of 5 million dollars on creation in Europe ExoAtlet Global

"ExoAtlet" attracted 5 million dollars on development of the project in the mezhdunarony market. The Korean company Cosmo and Company Co., Ltd acted as the investor. Under the terms of the agreement signed on April 2, in Europe the ExoAtlet Global company for commercialization of developments of "ExoAtlet" in the world market is created. In 2018 the company will open representations in Japan, the USA and China. In 2019 — in India. The ceremony of agreement signature took place in the presence of the Ambassador Extraordinary and Plenipotentiary of the Republic of Korea in the Russian Federation of mister At Jun Gyna.

ExoAtlet Global will finance R&D-центр "ExoAtlet" in Moscow. Production of exoskeletons will remain in Russia from where they will be exported to Europe.

In Technopark Skolkovo in November, 2017 documents on creation of joint venture which will prormote production of the Skolkovo company "ExoAtlet" in the Japanese market are signed.

Businessmen from South Korea became the partner of "ExoAtlet". The Cosmo & Company has a number of assets in Japan, and it will allow to register until the end of the year in Tokyo new joint venture. At the beginning of 2018 the certification process in Japan of products of "ExoAtlet" will be initiated. Process can borrow from eight months to one year.

Dennis Ahn, CEO of Cosmo & Company: "Russian "ExoAtlet" is technically very perfect, advanced product. Japan became the first country in which we act as partnea on creation of the joint company because there technologies, in particular robotics very quickly develop. For this reason we take in Japan the first step on globalization of products of our enterprise, joint with "ExoAtlet"".

Japan – one of four countries (along with the USA, Israel and Russia) where make exoskeletons. The Japanese company Cyberdyne with capitalization in one and a half billion dollars makes an exoskeleton of HAL (Hybrid Assistive Limb). The Russian product uses other algorithm, than Asian, but costs three times cheaper than the competitor. It, to opinion of the Japanese doctors with whom already held consultations – indisputable advantage.

Koreans invested in "ExoAtlet" 1.2 million dollars on development of the Asian markets, including China - the following country where they intend to promote the Russian product. The government of South Korea selected 800 thousand more dollars as a grant for development of the company at home. Partners do not disclose financial conditions of the new agreement. It is known that the Korean colleagues are engaged in management, marketing and certification. The Skolkovo company, in turn, provides a product, service maintenance and training programs.

2016: Beginning of sales of exoskeletons

At the end of June, 2016 "ExoAtlet" received the registration certificate in Roszdrava and, as a result, the right to sell the exoskeletons across all Russia.

At the same time clinical trials of the Russian exoskeletons in NMHTs of N.I. Pirogov began. 24 volunteers with an injury of chest and lumbar department of a backbone with walking malfunction, but with not complete paralysis will take part in the project. 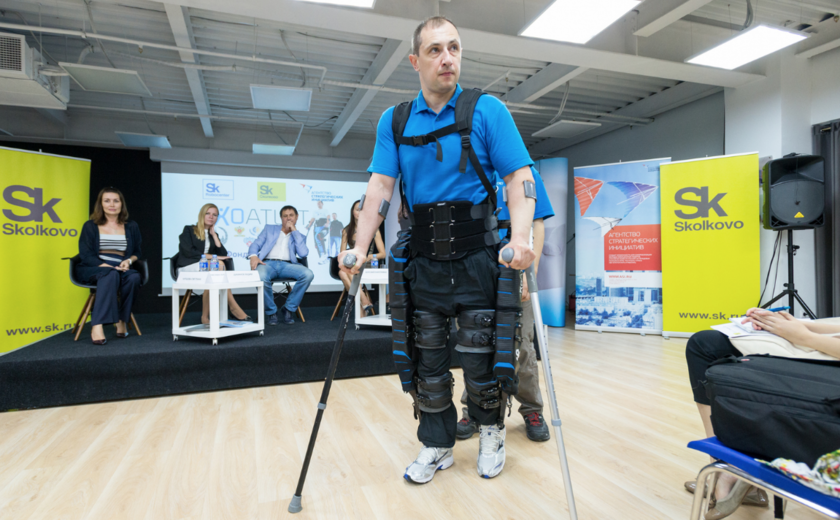 Within the research it is going to carry out contrastive analysis of exoskeletons with the classical methods of robotic mechanotherapy which are already used in rehabilitation process. Similar robotic complexes of foreign production are present at some Russian clinics, however they are extremely expensive and inaccessible for the population.

As reported TASS the founder of "ExoAtlet" Ekaterina Berezy, total investments into the company made 130 million rubles. Here money of investors and means from the state budget enter.

By words Berezy, "ExoAtlet" allows an exit to foreign market, however receiving approval of the American Food and Drug Administration requires $2 million and 2 years on obtaining the registration certificate.[1]