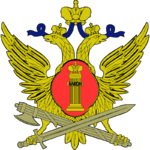 The main objectives of FPS of Russia are:

On January 9, 2020 the Federal Penitentiary Service (FPS) announced conducting tests of service for employment of the convicts preparing for release. Interfax with reference to press department of department reports about it. Read more here.

The head of the Federal Penitentiary Service Gennady Korniyenko resigns

On October 3, 2019 it became known that the Russian President Vladimir Putin dismissed the head of the Federal Penitentiary Service (FPS) Gennady Korniyenko.

On November 6, 2019 it became known of plans of the Russian Ministry of Internal Affairs to suppress cellular communication in prisons for decrease in a crime amount by convicts using means of communication.

According to RBC, bodies of the Ministry of Internal Affairs together with the Federal Penitentiary Service (FPS), the Federal Security Service (FSS) and Roskomnadzor will handle an issue of installation of "locks" of a signal of cellular communication in the territory of correctional facilities for fight against remote fraud.

Suppress cellular communication in prisons for decrease in a crime amount by convicts using means of communication.

Also it is going to introduce to the State Duma the bill obliging operators to cease to service certain phone numbers. It was drafted by the deputy of the State Duma Alexander Khinshtein.

The last confirmed to the edition information on preparation of amendments in laws, also he noted that annually in organizations of penal correction system about 60 thousand phones are withdrawn. According to the parliamentarian, by means of gadgets convicts can commit frauds, press on witnesses and also coordinate criminal groupings.

Will block how exactly cellular communication in the territory of prisons and colonies it is still unknown. The most simplest and efficiently is restriction by mobile operators of rendering services in a certain location, however in some cases it can create problems that who is not a prisoner.

The deputy minister of digital development, communication and mass communications Oleg Ivanov told RBC that the commission studied several options of blocking of signals of communication, but any of them was not recognized optimal.

Ivanov considers that the most effective method — "restriction by mobile operator of rendering services in a certain location". He added that among employees of correctional facilities prohibition on use of cellular communication on their territories already works.[1]

In places of detention there are 0.3% of Russians 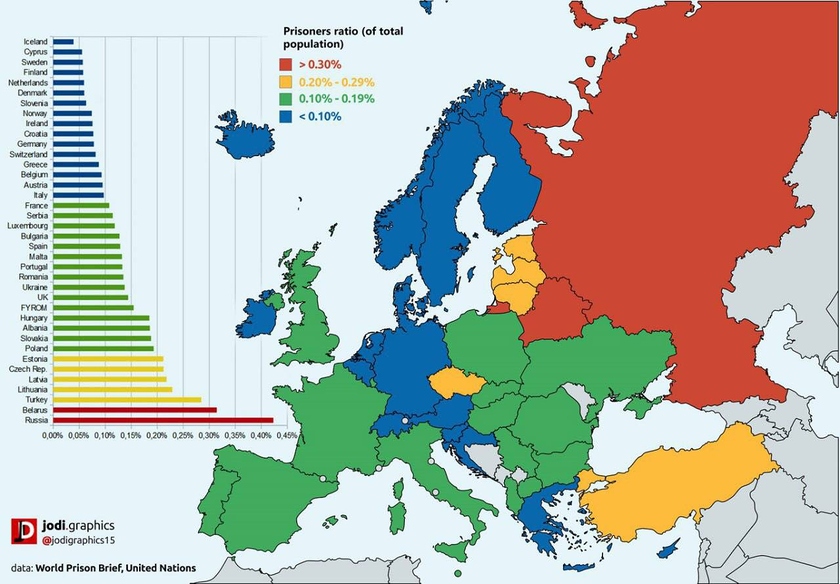 In Russia 405 prisoners are the share of 100 thousand citizens 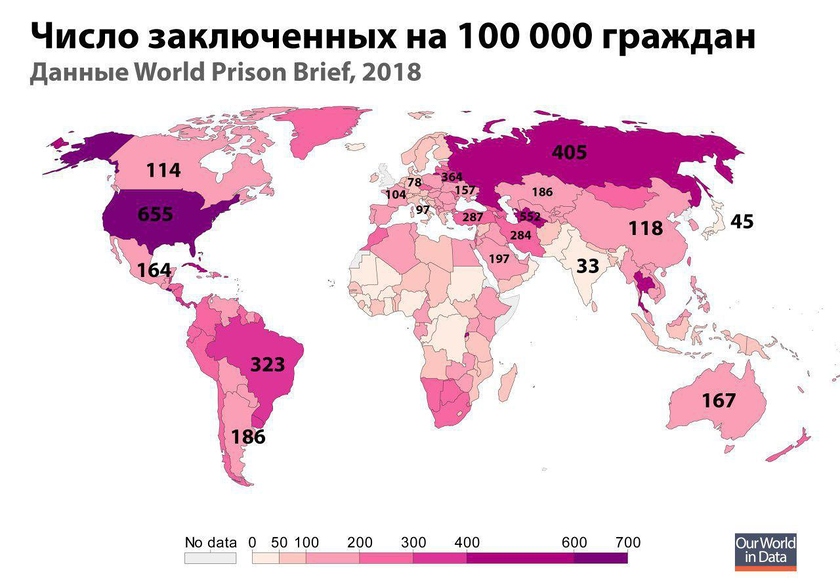 The former Director of the Federal Penitentiary Service (FPS) of Russia Alexander Reymer is found guilty of large scale fraud, reports Interfax news agency in June, 2017. The verdict was rendered by Zamoskvoretsky Court of Moscow on the case of plunder of p1.3 of one billion at commission of purchase of electronic bracelets for FPS in 2010-2012[2].

As the judge Elena Averchenko notes, for embezzlement from the federal budget Reymer used the official position, acting at the same time for self-interest reasons. Together with it the former deputy director of FPS Nikolay Krivolapov and the director of Federal State Unitary Enterprise Center of Information and Technical Support and Communication of FPS (Federal State Unitary Enterprise TsITOS) Victor Opredelenov were found guilty of fraud. In addition, Krivolapov was in addition found guilty of illegal purchase and storage of ammunition. Defendants deny the fault.

The investigation found that in 2010-2012 defendants stole means which the FPS received from the budget on purchase of electronic bracelets for supervision of defendants. Purchase of these systems was carried out at the prices overstated several times. So, the stationary control device worth p19 of one thousand was bought for one thousand p108, and mobile — instead of the same p19 of one thousand at one thousand p128 price. Federal State Unitary Enterprise TsITOS acted as the seller of bracelets, the total amount of the concluded government contracts with it was more p3.3 of billion rubles.

At the same time actually the seller did not locate the capacities necessary for production of these products. At the beginning of 2013 it became clear that the center was only an intermediary in their acquisition at the commercial organizations. The purchased devices were faulty – GLONASS sensors did not work for them.

As a result of Federal State Unitary Enterprise TsITOS received for the rejected bracelets of an order of p2 of one billion from which p1.2 of one billion were stolen in a fraudulent way. A part of these means went for bribery of Reymer helping with plunder. It got a bribe in the amount of more p140 of one million from the accomplice Nikolay Martynov, and transfer of money happened in Reymer study in Moscow.

The Investigative Committee brought in May, 2017 criminal case upon embezzlement of budget funds when purchasing of 1.5 thousand computers for FPS. The source in law enforcement agencies reported about it to Gazeta.ru.

The FPS confirmed this information, having noted that the fact of plunder was elicited as a result of operational events which were held by the staff of USB FPS of Russia.

"Criminal case was brought according to Article 159 by UK "Fraud" and Article 285 UK "Abuse of office" — told a source.

It is noted that it is about plunder of 1 million rubles, however it is possible that at legal investigation the amount can will increase several times

Purchase of computers was carried out within accomplishment of the state defense order for 2015. In total the FPS intended to buy 1.5 thousand computers.

On July 1, 2016 it became known of results of work of board of Accounts Chamber and execution of the federal budget by the Federal Penitentiary Service (FPS of Russia) in 2015 - FPS it is groundless spent 2.2 billion rubles for IT and more than 765 million rubles on the design estimates which will not be used[3].

Check reveals 21 violations, including 9 financial for the total amount of 4.7 billion rubles. In particular, the FPS in 2015 executes financing of actions for informatization for the amount of 2.2 billion rubles in the absence of the approved plan.

Territorial authorities of FPS signed ten public contracts on installation and construction works with overestimate of their cost on 759.1 million rubles: the price of contracts includes a value added tax in the presence for organizations of the penal correction system (PCS) of a privilege on this tax.

On 104 objects of penal correction system the design estimates, costs on which preparation made 765.4 million rubles of the federal budget, are not demanded.

The Accounts Chamber directed ideas of elimination of violations to FPS of Russia and Federal State Institution "Pre-trial Detention Center No. 5 of the Department of the Federal Penitentiary Service for Moscow", the information letter – FULL FACE to Russia, the conclusion - to chambers of Federal Assembly.

2013: The FPS bought "pigs" instead of bracelets with GLONASS. The police carry out an inspection

On February 26, 2013 the head department of Investigative Committee of Moscow announced conducting investigation verification in "The center of engineering facilities and communication" (TsITOS) subordinated to FPS for the facts of violations when purchasing a system of electronic monitoring of controlled individuals.

According to the materials reported by FPS to law enforcement agencies, department concluded with TsITOS government contracts on production of stationary devices and mobile control devices with the electronic bracelets equipped with the GLONASS modules.

The technical research showed that in the systems of electronic monitoring the GLONASS modules is absent. It means that the made products cannot be used for designated purpose. Also it became clear that TsITOS did not make these products, and bought them from a third party, packed and delivered to the customer.

Procurements were conducted on means from the state budget. The prices at which TsITOS bought the equipment were twice higher than market. Thus, damage for the amount more than 1.3 billion rubles was caused to department.

Within check law enforcement agencies will give legal evaluation to actions of the former director of FPS Alexander Reymer, the deputy director of department Nikolay Krivolapov and the director of TsITOS Victor Opredelenov whose signatures stand on protocols of the prices of the purchased equipment and also the director of the TsITOS Samara branch Ivan Kuklevy who signed justification of purchase prices.

According to the investigation, exactly these persons revealed financial violations by production of the above-stated equipment, however, instead of telling about them to law enforcement agencies, they began to demand 80 million rubles from the director of supplier company, promising it to prevent contract cancelation. In fact, these officials had no opportunity to influence termination or treaty extension.