The Foresight group as a part of ITG holding since 2016 is engaged in development and promotion of software products of the Perm company "Prognoz". Is an owner of the expanded license for the platform of a business intelligence Prognoz Platform with the right of its sublicensing, completion, maintenance, support and modification. Obtained the expanded license for products Foresight after Prognoz in 2016 faced serious financial difficulties. 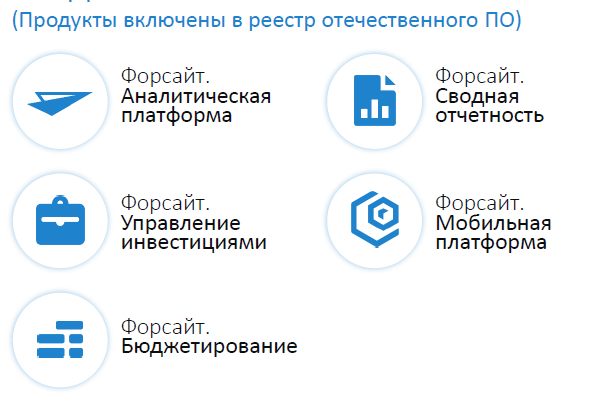 Authorized capital of the key legal person of Foresight company - Foresight LLC - increased to 1.14 billion rubles, the data published in base " circuit.focus " demonstrate.

The only founder and the participant of Foresight LLC, according to the USRLE, is Inlayn Tekhnolodzhis. 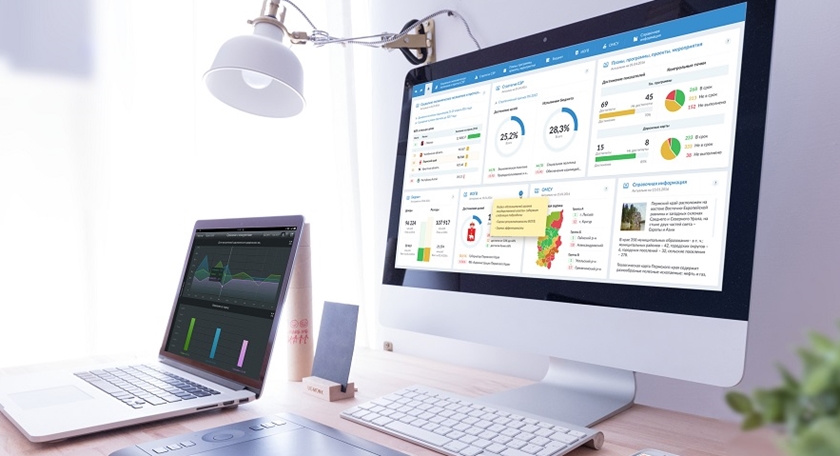 The flagship product Foresight is the analytical platform (a photo - Foresight)

The recapitalization purpose - repayment of the existing loans and the credits, decrease in percentage load of Foresight in 2020 and further - stabilization of financial performance of the company in the long-term period explained TAdviser in the company.

Besides, in Foresight calculate that recapitalization will promote increase in attractiveness of the company for customers and creditors.

The current volume of loans and credits Foresight in the company did not specify TAdviser, having referred to the fact that it is the restricted information. By data " circuit.focus ", in 2018 short-term loan obligations of Foresight LLC exceeded its revenue, having made 674.2 million rubles against 315.6 million rubles. The company did not publish financial results of activity for 2019 as of the end of March of the 2020th yet.

2019: Partnership about InfTech in the field of digitalization of the enterprises of the oil and gas industry

Russian Foresight software developer and MES- the integrator "InfTech" was announced on October 4, 2019 conclusion of an agreement about partnership. Foresight works on domestic IT market in the field of development of software products for analysts data and also mobile solutions.

Consolidation of efforts of the Russian IT companies is aimed at optimization of the modern oil and gas enterprises. Implementation of the high-performance analytical systems based on software products of Foresight will allow customers of InfTech company to increase decision making speed thanks to modern modeling tools and forecasting.

The receiver of Prognoz company Elena Udovichenko submitted to Arbitration court of Perm Krai the application for cancellation of "the agreement on providing right to use of programs and the database for a computer" of the December 12, 2016 concluded between Foresight LLC and JSC Prognoz reported on October 1, 2018 RBC. The relevant information is placed in the Unified Federal Register of Bankruptcy Information (EFRSB) on September 27. Parts of the disputed transaction are not disclosed as the amount of the controversial agreement does not reveal. Read more here.

In March, 2018 the CEO of Foresight Vladimir Komov in an interview of TAdviser told about innovations of the last release of the Prognoz Platform platform, changes of the principles of its development and also plans of promotion in Russia and in the West.

2017: "Forecast" dies, but its case lives. About fatal errors of management and perspectives of a product

The CEO of Foresight company (is a part of the ITG group) Vladimir Komov in April, 2017 opened plans for development of the products "Forecast" and a partner network for its sales. Also he told how the situation in Forecast is and shared opinion on the reasons of crash of this company.

The second life of the analytical Prognoz Platform platform

In 2016 Foresight obtained the exclusive expanded software license "Forecast". It grants it the right of licensing, completion and support of products of Forecast.

According to Vladimir Komov, Foresight plans serious investments into development of products and a partner network for their sales. Investments at the rate from 500 million to 1 billion rubles are planned for 2017 for these purposes, he said.

In plans Foresight - at the end of 2017 to release the new, 9th version of a flagship product of Forecast – the analytical Prognoz Platform platform. The latest version left in 2015 earlier. The updated product will contain "revolutionary changes" and to consider recent trends of the market of BI and advanced analytics, Komov reported.

In a conversation with TAdviser it noted that, in particular, in it in-memory technologies will be implemented (calculations in RAM), performance will be significantly increased, support of clouds, additional resources of visualization, BI of real time, support of BPM, serious changes from the point of view of management of the data warehouse, etc. will appear. Also the designer of business applications on the basis of the platform as a separate product will be created. 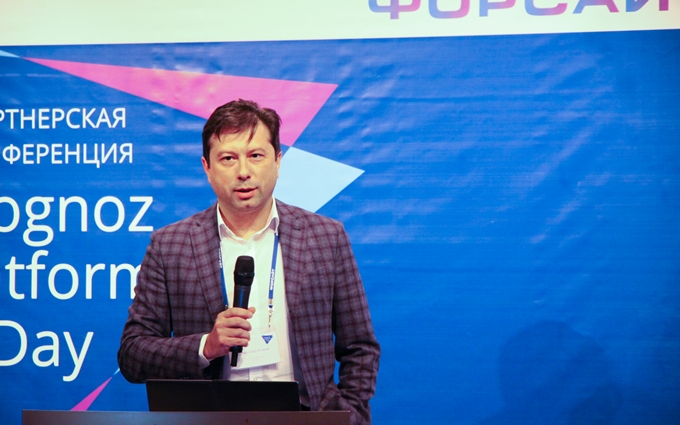 Execute the custom developments which are not connected with products based on Prognoz Platform, the company does not plan.

Moreover, in the near future the company is not going to be engaged in implementation and own products. Foresight would like to do it by forces of partners.

Developers – under the aegis

The development team of the Prognoz Platform platform as of April is created and makes about 120 people, Komov told TAdviser.

After the difficulties which arose in Forecast these developers left and as of the beginning of 2017 are "technically" dispersed in the different companies. They conduct product development of Forecast for Foresight as contractors so far, working as a uniform command, he explained.

After the planned restructuring Foresight wants to transfer these developers to itself on a full-time basis.

Vladimir Komov reported to TAdviser that in the long term Foresight is going to finish development team to more than 300 people. As of April Foresight actively employs such specialists.

In "the best years" of Forecast, according to Komov, about 200 developers, including teams of outsourcers whom they attracted worked on Prognoz Platform.

Perm, as well as earlier, will remain the basis for development. Also the company is going to develop base in St. Petersburg.

In addition to Foresight developers expects to improve the relations and with teams of implementers of products of Forecast which left the company and dispersed on different legal persons. Foresight signs partnership agreements with a number of these commands further to work with them as with partners.

Formation of a partner network

Since the end of 2016 Foresight began to develop a partner network actively. The company processed the affiliate program which Forecast had, and now, according to Komov, it one of the most interesting in the market.

The part not only integrators is assigned to partners, but also the possibility of use of technologies Foresight is provided during creation of own products – so-called OEM partnership. 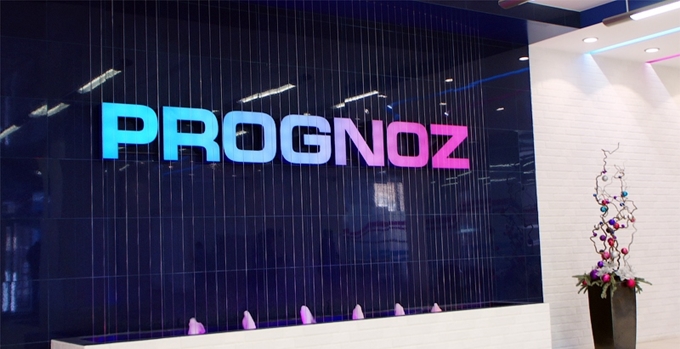 Foresight will adhere to other principles of work with partners, than Forecast (a photo source - Rifey-Perm)

The partnership director Foresight Denis Milyukov told that as of April, 2017 at the company are signed partner the agreement approximately with 15 partners.

In work there are even more than 10 agreements which signing Foresight expects in the nearest future. Among the last – the agreement with the companies "IT" and "Croc".

Until the end of 2017 Foresight expects to sign in total about 60 partnership agreements, Milyukov says.

At the initial stage Foresight will be focused on formation of the Russian partner network. At the same time, the company cooperates also with foreign partners who Forecast had.

Denis Milyukov noted that Forecast actually only in the last few years began to develop the affiliate program, and before the company did everything independently and had powerful staff of implementers.

Vladimir Komov considers that Foresight could support the main big customers of Forecast, and they practically did not feel that the company had big financial difficulties.

Old projects of big customers were saved and restarted. Foresight acted as the guarantor of the fact that the platform will develop and be supported, Komov says.

Foresight discusses the strategic partnership relevant against the background of a course towards import substitution with some customers. One of the most big such customers, according to Komov, is Gazprom where Prognoz Platform is used quite widely.

As of April Foresight conducts with Gazprom negotiations on start of the new projects and development which are already existing on transition to new versions of the platform, Komov claims.

One more of the largest customers with whom Foresight works Komov called TAdviser the Central Bank of Russia. The finance regulator was concerned by the fate of Forecast and its software, the CEO noted Foresight as at bank a large number of systems is implemented on the Prognoz Platform platform.

The company discusses strategic partnership also, for example, with Transneft and Rosneft. Komov noted that some projects in a public sector, despite efforts of his company, were suspended, but in general the situation develops positively.

As of the beginning of 2017 in Forecast there were only supporting divisions, Vladimir Komov told TAdviser. According to its information, the company does not perform work on implementation any more. The CEO of Forecast Maxim Balash completes affairs of the company, he told.

"Forecast" has a large number of creditors. The currency component therefore the total amount of a debt in rubles constantly changes together with changes of currency rates also is in debt. At a rate in 60 rubles for dollar the total debt of the company was estimated approximately at 6 billion rubles, the CEO told Foresight.

The largest creditor is European Bank for Reconstruction and Development, and from Russian banks – consolidated banks VTB and Bank of Moscow, tell in Foresight.

Why Forecast went to a bottom

Vladimir Komov considers that financial difficulties of Forecast are the investigation of a number of decisions which were made in due time by management of the company. Believe in ITG that two strategic mistakes were made.

The first error is that management did not begin to develop the vendor direction, did not separate it from consulting, integratorsky business. The last by determination bears higher risks, Komov noted.

The second error – very broad expansion, including on foreign markets. She demanded very considerable investments, at the same time not always yielded a sufficient financial result. The company there were just not enough financial resources to implement the program of expansion.

Acquisition of the rights to products of Forecast

On December 18, 2016 the ITG holding and Prognoz company announced signing of the contract. On it, structure of ITG - the Foresight company purchased the expanded software license of Prognoz and received the status of the sole distributor of the company (in more detail - in the separate article).

Renaming into Foresight and change of the CEO

In 2016 ITG Consulting was renamed into Foresight. Vladimir Komov heading the Saprun company which is also entering into ITG holding became the CEO in December, 2016.

Till 2010 the company worked under the Triangle Consulting brand and rendered services in the field of strategic, operational, IT consulting; implementation of information management systems by the enterprise. In 2010 Triangle Consulting completely stopped the activity in connection with leaving of a number of key staff. The ITG Consulting company became her successor.