"Gazpromneft-regional sales" – the sales enterprise of Gazprom Neft created in 2013 as a result of reorganization of model of wholesale and retail sales of the company.

The Gazpromneft gas Station network contains about 1300 stations in Russia and the CIS countries. The wide geography of Gazpromneft gas Station network and profitable location of the Omsk, Moscow and Yaroslavl oil refineries provide the leading positions of Gazprom Neft in the wholesale and retail markets of Western Siberia and the central part of Russia.

2020: Opening of gas station in Obninsk

In Obninsk there began work the gas station of Gazpromneft network. The gas station is located on Kiyevskoye Highway, 101 km. Offer motorists fuel of production of own oil refineries of Gazprom Neft: AI-92 and AI-95 and also bonus G-Drive 95, the improved Diesel Opti fuel and the liquefied petroleum gas (LPG). On February 25, 2020 Gazpromneft reported about it.

Work at gas station shop where it is possible to purchase goods to the road, and cafe under own Drive Cafe brand. Also motorists can use services of the refueler and a post of swapping of buses.

The station works on the system of post-payment at which clients at first fill cars on one of fuel-dispensing columns, and then pay fuel in cash or the bank card. Thanks to this system stay time at gas station is cut by half.

On December 27, 2019 "Gazprom Neft" reported that put into operation 92 gas stations in 2019 and expanded geography of activity of network to 44 the Russian regions. Gazpromneft gas stations began work in 7 doponitelny regions - in Kurskaya, Lipetsk and Voronezh areas and also in the Republics Bashkortostan Mordovia, Tatarstan and Chuvashia. 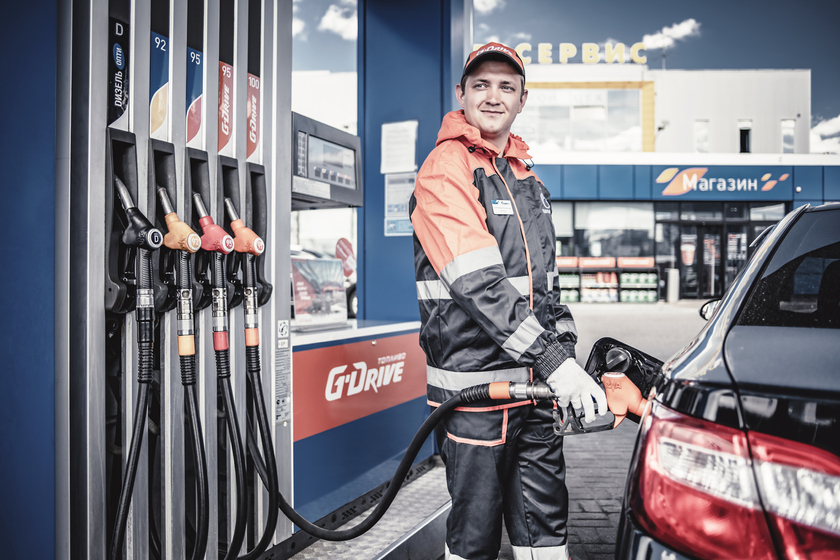 Construction of full-scale gas stations on the largest Russian highways became one of the key directions of development of roadside infrastructure: in November, 2019 Gazprom Neft put into operation 4 stations on federal highway M-11. Also within cooperation with the international networks of fast food in St. Petersburg the joint project of the updated gas station with the increased area of cafe and the line of immediate-service of clients on cars was started. Thanks to it the number of clients of this gas station grew by 9%. 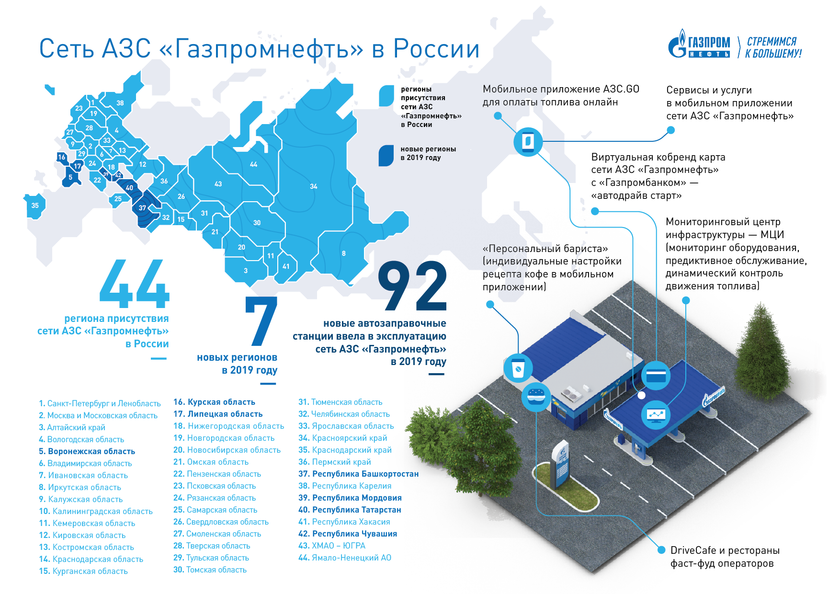 Along with service gas stations, usual for clients, with shop and the cafe, the company implements other formats of gas stations - complete and mixed. Thanks to the small size complete gas stations can be placed on parkings of shopping and entertainment centers and in city residential districts. Complete gas stations – completely Russian development conforming to modern requirements of industrial and environmental safety. Capacity of similar stations makes up to 350 cars a day.


Opening of the first gas station in Bashkortostan 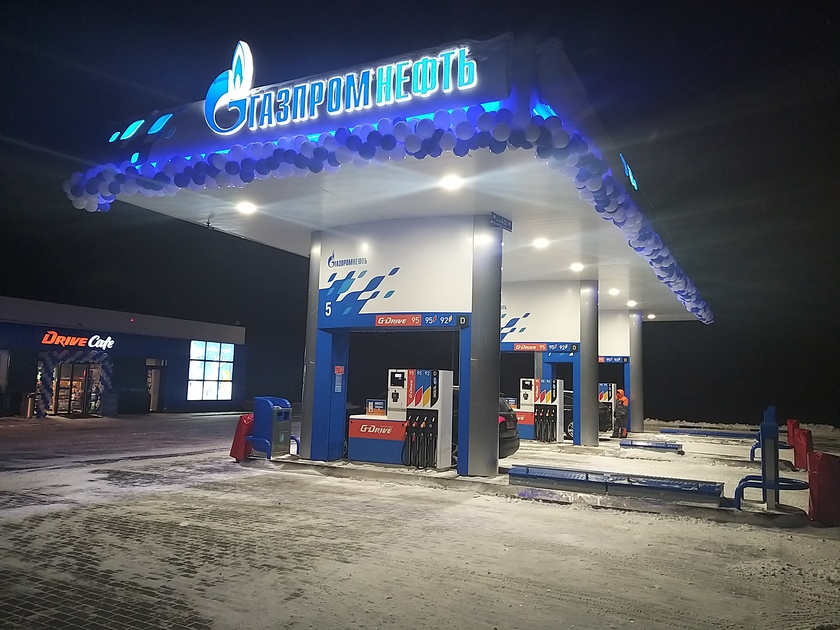 The cafe under own Drive Cafe brand and also the shop offering more than 2.5 thousand goods to the road works at gas station. Motorists can also use services of the refueler, free Wi-Fi, pump up buses, wash headlights, glasses and number of the car.

Besides, now residents of Bashkortostan can join the loyalty program "To us on the way". It allows to accumulate bonuses and to pay with them for oil products and joint products at stations of network through the whole country.

The station works on the system of post-payment at which clients at first fill cars on one of fuel-dispensing columns, and then pay fuel in cash or the bank card. Thanks to this system stay time at gas station is cut by half.

It is possible to find a way to gas station on the website gpnbonus.ru or in mobile application "Gazpromneft gas Station Network, available to Android and iOS.

On November 19, 2019 Gazpromneft reported that in Tatarstan there began work the first two gas stations of network. Both are located in Kazan: on Magistralnaya Street, 33 (body 2) and the street the Siberian path, 36 E. At compact gas stations offer motorists AI-92, AI-95 fuel and diesel fuel. And also – the corporate Drive Cafe coffee. 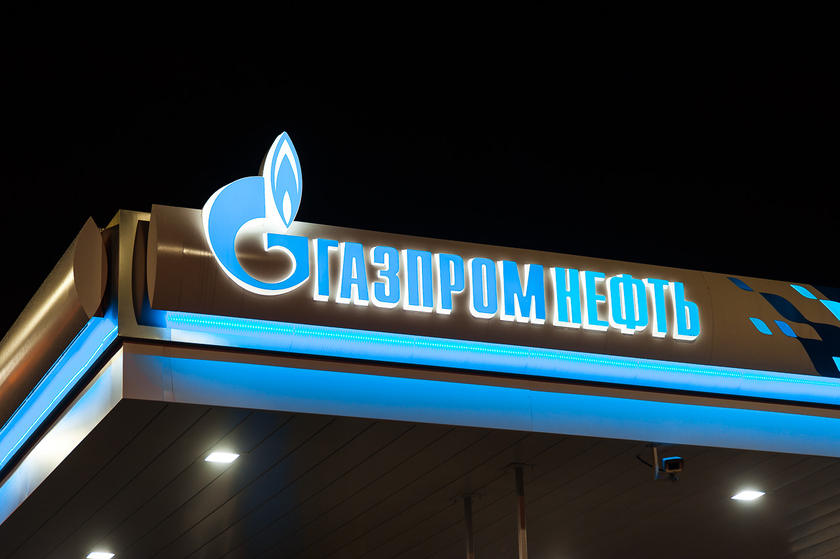 Besides, now residents of Tatarstan can join the loyalty program among the Russian motorists – "To us on the way". It allows to accumulate bonuses and to pay with them for oil products and joint products at stations of Gazpromneft network through the whole country.

The opened gas stations work on the system of prepayment at which clients at first pay with a cash or non-cash method the necessary volume of fuel, and then fill cars on one of fuel-dispensing columns.

Also until the end of 2019 in the region will open three full-size seti «gazpromneft gas Station on two of which to motorists there will be well corporate G-Drive 95 fuel. It is possible to find a way to the nearest station on the website gpnbonus.ru or in mobile application "Gazpromneft gas Station Network", available to Android and iOS.

On April 1, 2019 Gazpromneft reported that its network of gas station became one of the first refueling networks in Russia which received the international certificate HASSP. It guarantees that the food made in cafe at gas station of network correspond to the principles of security accepted in the European Union. 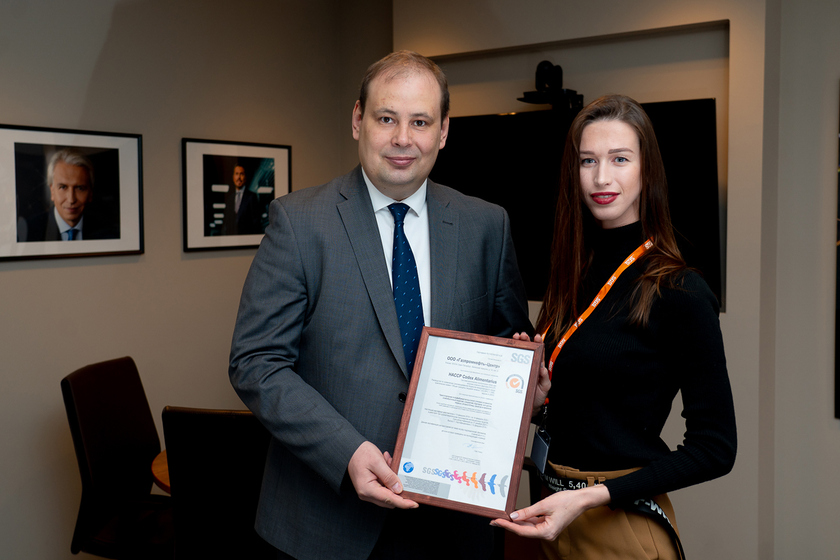 The HASSP system (from engl. Hazard Analysis and Critical Control Points (HACCP) – risk analysis and critical control points) works in Europe and thanks to strict certification provides risk control in a production process. Including it is directed to warning of hit in products of physical, chemical, organic and other pollution. Since 2015 respect for the principles of HASSP is obligatory for all producers of foodstuff in Russia, however certification on this standard is voluntary.

Certification audit of gas stations of Gazpromneft network was booked by the Swiss company SGS which certified about 75% of the food market of Russia. Check of gas station in Siberia confirmed that Gazpromneft installed and supports a management system according to requirements of the HASSP standard. Until the end of 2019 certification there will undergo gas stations of network in the Central and Ural regions of the country. For confirmation of the certificate of the company it will be necessary to undergo annual supervising audits.

Products made at Gazpromneft gas Station conform also to the Russian quality standards that is regularly controlled by specialists of Rospotrebnadzor and Rosselkhoznadzor. Also in the company the internal program of production supervision including including, checks of products in the independent accredited laboratory works.

Pilot start of gas station of the mixed type

On March 21, 2019 reported Gazprom Neft that its network the gas station started the project of operation of gas stations in the mixed format. In the afternoon gas stations work as service with cafe and shop, in night – as automatic. 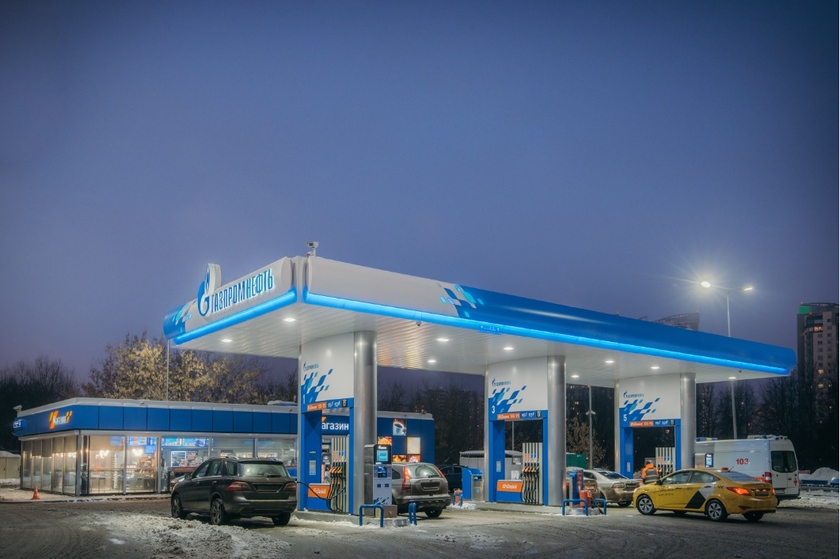 The mixed format widely is applied in the countries of Europe and allows to increase efficiency of gas station due to work optimization. In the afternoon at gas station of the mixed format clients can use services of personnel of the station for refueling cars and also purchase goods in cafe and shop. At night gas stations pass into an operation mode of automatic stations where clients independently refuel, using payment terminals.


The provided format affects in the pilot mode 5 seti «gazpromneft gas Stations in Moscow, Omsk and Yaroslavl. In the nearest future stations of the mixed format will appear also in St. Petersburg and the Moscow region.

The program of renovation of trading floors of seti «gazpromneft gas Station proceeds. In 2019 it includes stations in the Central, Ural and Siberian federal districts.

Renovation of trading floors of 97 gas stations is carried out

On February 25, 2019 Gazprom Neft reported that in 2018 it carried out renovation of trading floors of 97 gas stations. Changes were seen by clients of network in Moscow, the Moscow region, Nizhny Novgorod, Yaroslavl, Yekaterinburg, Krasnoyarsk and also in a number of the cities of Krasnodar Krai and North-West Region of Russia. 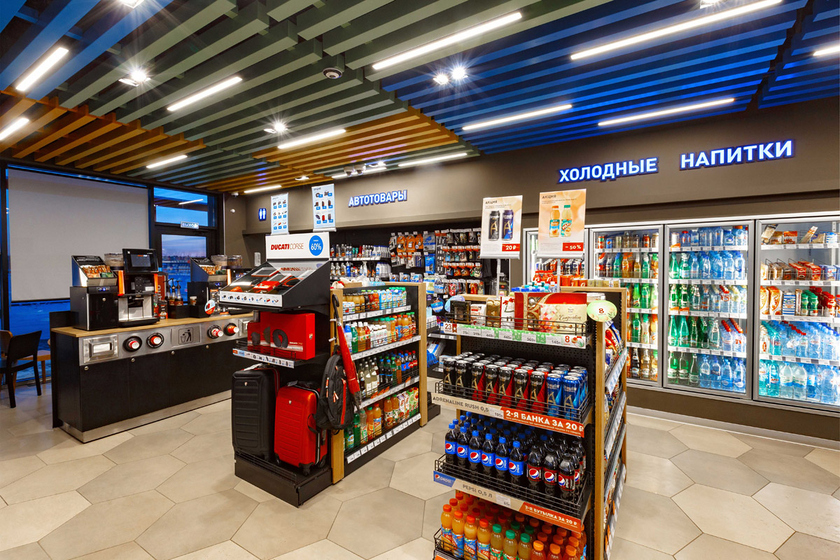 In 2018 trading floors nearly hundreds of gas stations of Gazpromneft received the updated design. Their interior was completely updated according to the relevant corporate style of network. At the same time at stations upgrade of a retail store equipment, ventilation systems, conditioning and power supply, sanitary zones was carried out.


Polls showed that motorists are positive for the updated appearance of trading floors of stations. The average score of changes made 4.7 points of 5.0 possible, at the same time 77% of respondents estimate last changes on 5 points. 78-81% of respondents agreed that such characteristics as "modern", "comfortable", "stylish", "convenient" completely approach gas station after renovation. The share of the clients giving the highest assessment to gas station grew from 40% to 81%. 5% of respondents said that they will come around to refuel on the updated station more often than earlier.

"Gazpromneft-regional sales" at the end of 2015 implemented small wholesale 14.3 million tons of oil products that is 3% higher than an indicator of 2014.

The Gazpromneft gas Station network in 2013 implemented 8.4 million tons of oil products in Russia and the CIS countries that is 13% more, than in 2012.

In Russia average daily sales at gas station grew by 8%, having reached an indicator, record for the domestic oil industry, in 19 tons. Growth is caused by reconstruction and rebranding of network, the successful advertizing campaign and development of the loyalty program. The number of participants of the rewards program "To Us on the Way" made 4.3 million motorists that is 34% more, than at the end of 2012. Sales at gas station to corporate clients according to fuel cards in Russia grew by 10%.

Good results were shown by the accompanying business. For 44% sales proceeds grew by gas station of joint products and services, and the number of gas station with shops increased by 21% — from 758 to 914.