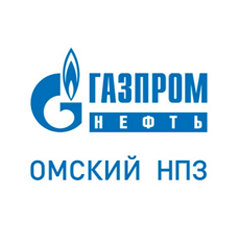 In 2014 Gazpromneft-ONPZ saved championship in oil processing volumes in Russia, having processed 21.3 million tons of oil raw materials. Depth of processing grew to 93.02% - it is the best indicator in the industry.

IT in Omsk Refinery

On March 2, 2020 Gazprom Neft reported that at the end of 2019 its oil refineries — Omsk and Moscow — reduced electricity consumption, is warm also fuels. Economic effect of accomplishment of energy saving actions was 0.5 billion rubles. Energy consumption reduction this important direction of the program of development of oil processing assets of Gazprom Neft. Read more here.

As it became known on November 19, 2019, the main projects in the power sphere of Gazprom Neft Oil Refinery in 2018-2019 became commissioning of a solar power plant at the plant in Omsk and approbation of digital technologies in distribution networks of power supply.

The platform for the pilot selected Omsk Refinery: in this region on average there are 308 sunny days in a year. Hevel Group with which agreement on cooperation was signed in June, 2019 became the partner of Gazprom Neft in this project.

A photo-electric system using highly effective two-sided heterostructural solar modules is built to territories of Omsk Refinery less than for half a year. The power plant is constructed in four types of execution: static land, front, roofing and using the systems of tracking the sun — on the basis of the biaxial automated trackers that allows to provide the maximum electricity production during the whole year. 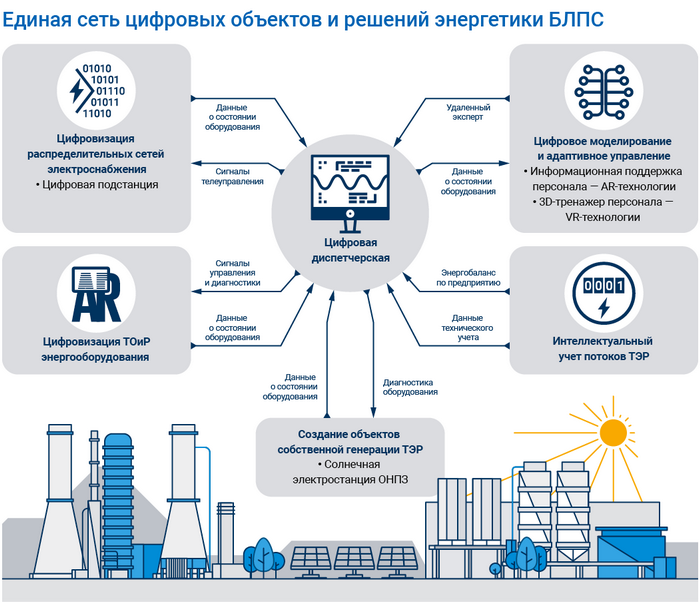 Total power of the first solar power plant of Gazprom Neft is 1 MW that can substitute up to 1% of the general energy consumption of Omsk Refinery. The power plant works in the mode of test operation, and afterwards it will provide with the electric power non-productive objects of the plant: dining room, system of outside lighting and administrative buildings.


Major step to digitalization of power of Gazprom Neft — project implementation Digital substation. It is about transfer to digit of the systems of relay protection and object managements of power industry of Refinery. It is the long project consisting of three big stages. Creation of testing ground — the Digital Substation software and hardware complex on the main step-down substation of Omsk Refinery became the first stage. According to the program manager "Digitalization of the Power function of Sergey Cheprakov, a software and hardware complex integrated the advanced equipment of 11 Russian and foreign producers. It includes intelligent electronic devices of relay protection and automatic equipment and also the communication equipment working at the uniform standard data exchange protocol.


Its scaling became continuation of the project on Omsk Refinery. Until the end of 2019 on the main step-down substation of Moscow Refinery there will begin work one more testing ground of technology — Digital Substation.

Reduction of consumption of heat, fuel and electric power

On March 18, 2019 Gazprom Neft reported that at the end of 2018 own oil refineries — Omsk and Moscow — significantly reduced consumption of heat, fuel and the electric power. Read more here.

In 2015 the plant celebrated 60-year anniversary. The enterprise approached this date with significant results. The first stage of upgrade of the enterprise directed to quality improvement of products within which the complex of deep processing of fuel oil and installation of primary oil refining AT-9 are reconstructed is completed. As a result at increase in production impact on ecology decreased by 30% more than for 33% as a result of upgrade the Omsk petroplant started the production of motor fuels of the fifth ecological class. 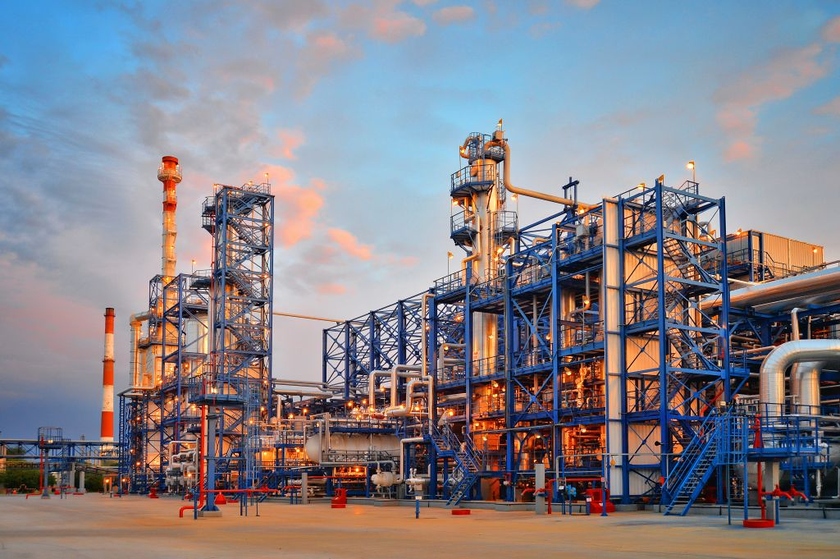 2010: Start-up of installation of isomerization of petrol fractions "Izomalk-2"

Start-up in 2010 of installation of isomerization of petrol fractions "Izomalk-2" became a milestone event. This unique complex is the most powerful installation of this type in Russia and Europe and enters into the three of the most powerful in the world (power - 800 thousand tons on raw materials). "Izomalk-2" releases izomerizat - a high-octane component of commodity gasolines with the minimum content of sulfur, aromatic hydrocarbons that allows to receive gasolines with high octane number of the fifth ecological class. 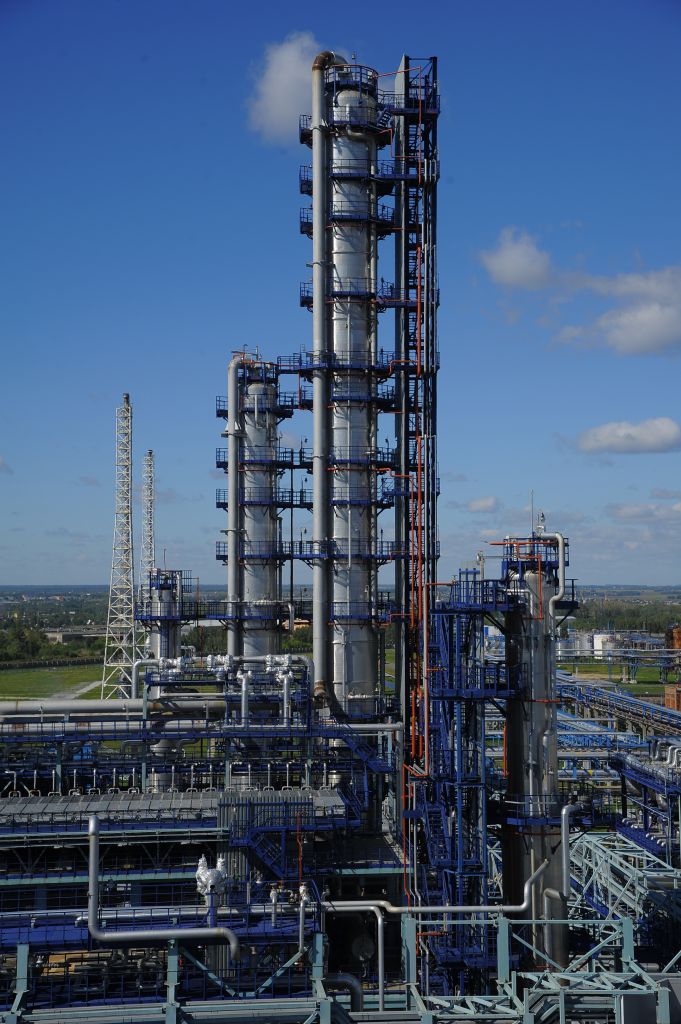 In 2011 for creation and large-scale implementation of the Russian competitive technology of isomerization and the industrial Izomalk complexes specialists of the enterprise awards of the Government of the Russian Federation in science and technology were conferred.

In 2006 the Omsk petroplant was a part of Gazprom Neft company.

2005: Reconstruction of the catalytic reforming unit is complete

In September, 2005 reconstruction of the L-35-11/1000 catalytic reforming unit with the block of hydrotreating was complete. Installation makes a high-octane component of gasoline with octane number to 102. Installation performance on raw materials - 1 million tons per year.

Building of installation was begun in February, 1996. From 1998 to 2000 works were suspended in connection with financial crisis in Russia. It was originally going to make only reconstruction of the block of reforming, but the decision to replace also the block of hydrotreating was made.

1996: Entry into the structure of Sibneft and reconstruction

Since May, 1996 legal position of Omsk Refinery changed - it became affiliated enterprise of Sibneft. After that the company began the implementation of the long-term program of reconstruction of the enterprise calculated until 2010. The program provided installation of the new equipment which will allow to expand the number of secondary processes of oil refining. A considerable part of the program was executed. Among the main achievements - the termination of production of ethylated motor gasolines, mastering of gasoline production of Ai-98, decrease in content of sulfur and aromatic hydrocarbons in diesel fuel. The enterprise reduced losses of raw materials and implemented energy-saving technologies.

At this time Omsk Refinery is the only oil refinery in Russia releasing catalysts. In 1996 at the enterprise the technology of tempering of zeolite which allowed to create the first domestic microspherical tseolitsoderzhashchy catalyst of cracking is mastered.

1994: The construction of a complex of deep processing of fuel oil is completed

In 1994 the construction of a complex of deep processing of fuel oil on which are developed components of gasoline, diesel and boiler fuels, tar is completed.

In 1983 the complex of aromatic hydrocarbons on which the first domestic benzene, the orthoxylol and a paraxylol used in petrochemistry is received is put into operation.

The 1970th: The largest oil processing enterprise of the USSR

Due to upgrade of production facilities, modernization and performance improvement of work the enterprise increased products production volume, expanded product assortment. In the 1970th years the plant developed production of coke, fuel for the river and sea vessels, lithium lubricant, high-octane gasoline and lubricants suitable for work in the conditions of Far North.

In 1964 the plant accepted the first batch of raw materials from the Ust-Balyksky field (Tyumen region). 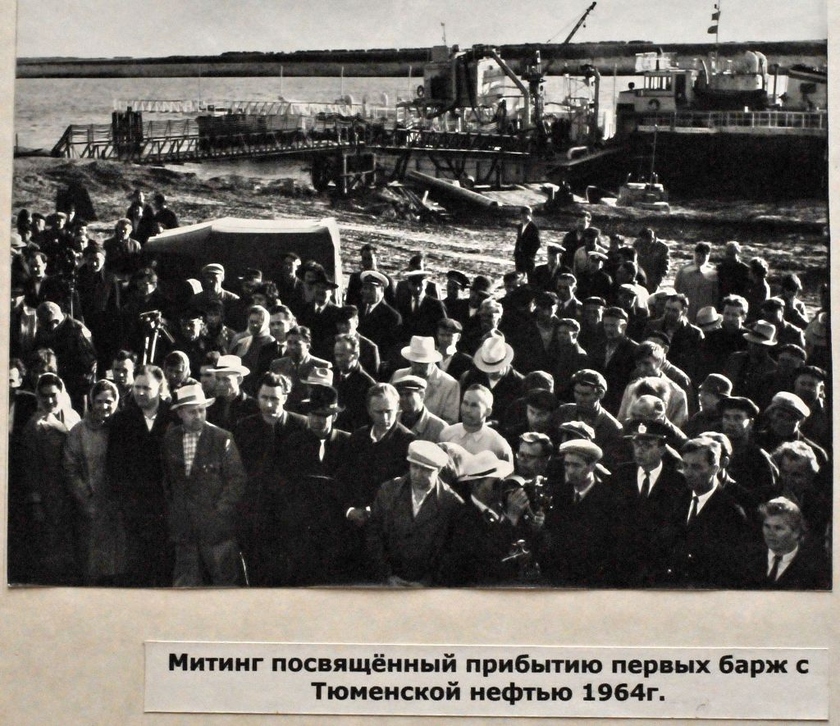 Development of new oil fields contributed to the dynamic development of the plant, input of new process systems. In particular, at the plant installations of the selection purification of oils, deasphaltizing of oils, dewaxings and also the electrodesalinating ELOU-7 installation were constructed. As a result from 1956 to 1965 the volume of the processed raw materials increased by 20 times and in 1965 was 11.2 million tons, by 10 times also product assortment grew.

1958: The first installation of catalytic cracking

The plant constantly expanded the product range. In 1958 the release of several sorts of lubricating oils was mastered, and the first installation of catalytic cracking, one of the basic industrial processes of deepening of oil refining for receiving high-octane gasolines from kerosino-gasoil fractions and vacuum gasoils was put into operation a year later.

1955: Opening of the plant. Oil from Bashkiria

The decision on the beginning of construction of the plant was made in 1949. The enterprise was urged to provide with fuels and lubricants regions of Western Siberia, the Urals and also other territories of the country. Nearly five years were conducted construction. More than 20 thousand workers were involved in construction of factory installations. On September 5, 1955 official opening of the plant took place.

Oil for processing was delivered from Bashkiria by rail. The first products – diesel fuel - were shipped on September 18 the same year. For the first year the plant processed 280 thousand tons of oil, product assortment made 4 names. 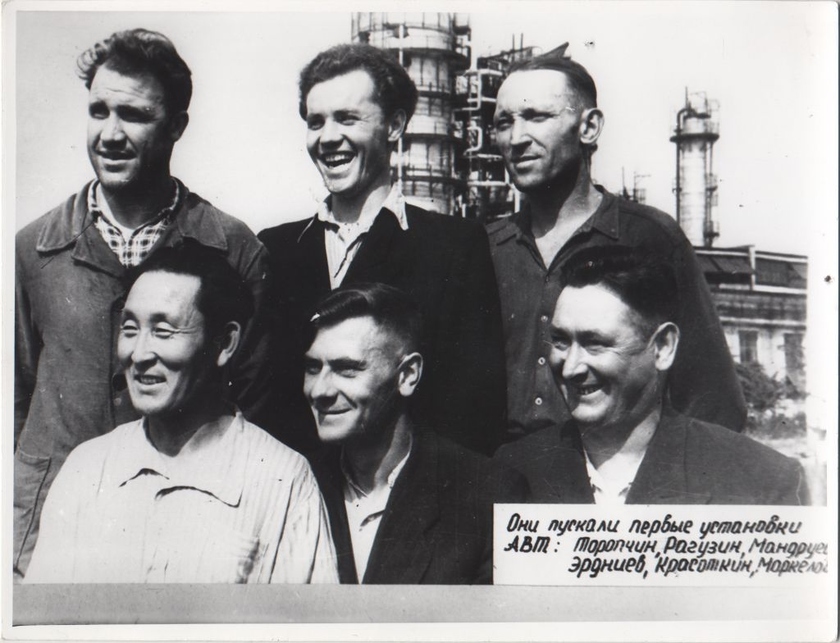 The first director of Omsk Refinery - Alexander Moiseevich Maluntsev. At it there was an active building and commissioning of new installations, infrastructure of the plant at the same time developed. Maluntsev paid special attention to the social sphere: near the plant the town of Oil industry workers with housing for workers, kindergartens, schools, medical, educational and cultural institutions was built. 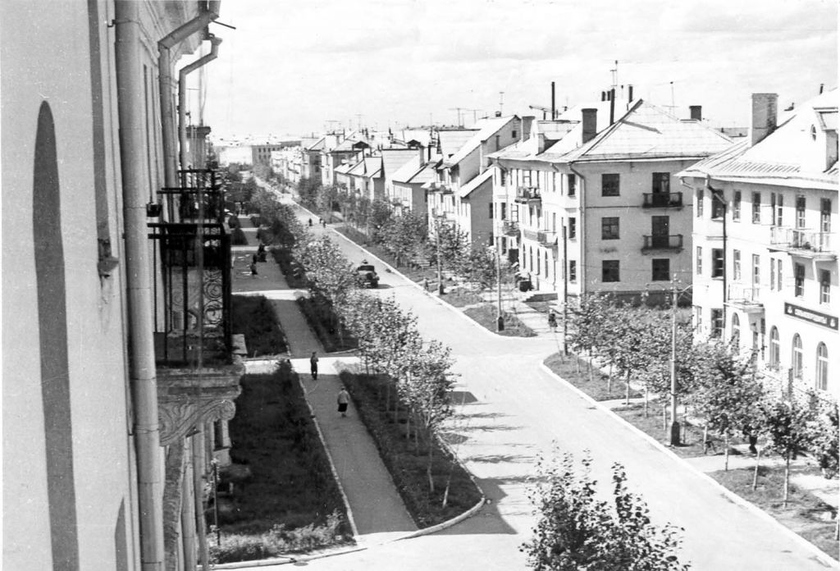