Instagram is developer company of the service social network of the same name of photographic images.

In 2017 the share of Instagram in revenue of Facebook made only 10.6%. In 2018 it will grow to 16% (the forecast of EMarketer for June, 2018). So far growth of revenue goes due to advertizing in a news feed. Video — the most perspective source of revenues of Instagram after a news feed.

Brand Analytics revealed the main trends of social networks in 2018 in Russia:

Instagram'ization: The brightest trend – the multiple growth of popularity of Instagram among Russian users – the number of authors and content in this network grew up in one and a half years by 3 times and continues to grow. According to AiTarget company, an official resseler of Instagram and Facebook in Russia, at the end of 2018 Russia takes the 6th place in the world and 1 place in Europe on number of active users of Instagram. At the same time on a share of users from number of inhabitants Russia is far from the first place. 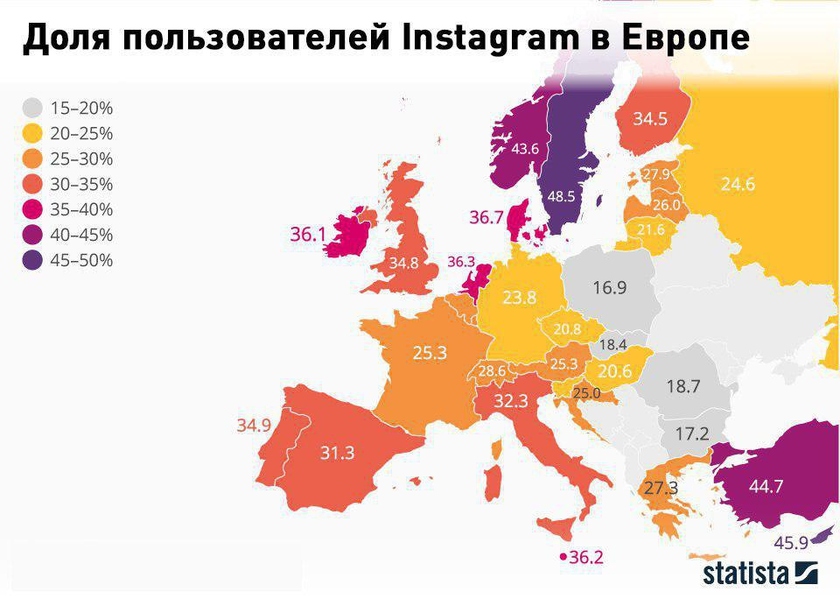 Share of the population of the countries for October, 2018.

Stars with the highest income from diaries in Instagram 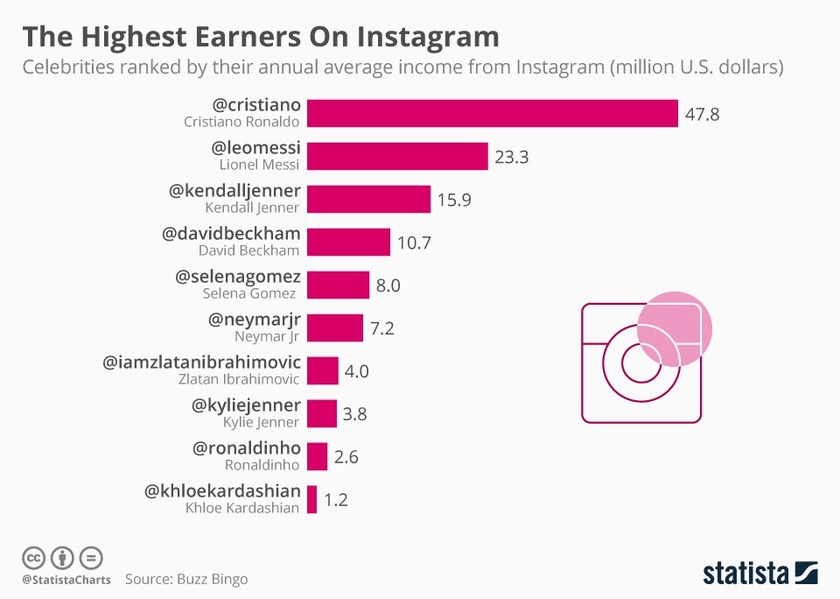 At this time Ronaldo takes for a post on average 975 thousand dollars and earns in Instagram more, than its salary as football player (47 million against 32).

The average price of the paid publication quickly grows 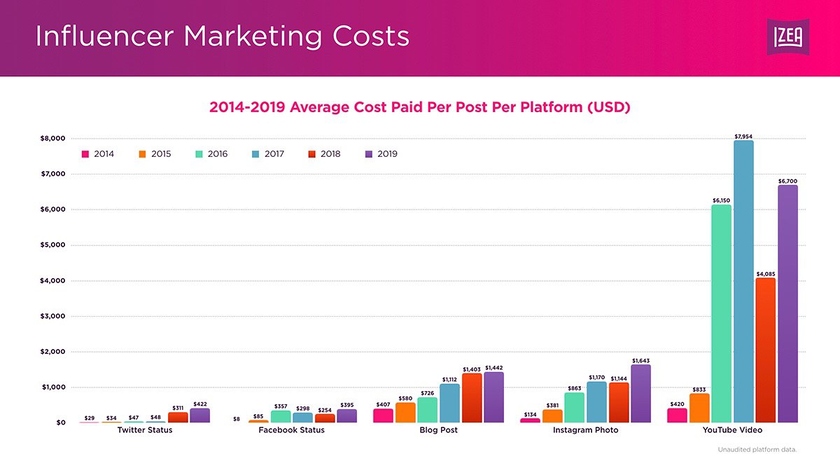 Average price of the paid publication

Restriction are connected with presidential elections in 2020 — the management of Instagram is afraid that the social network can be used for political intervention as well as Facebook. Such policy differs from Mark Zuckerberg's position of rather political advertizing. He said recently that it is an important part of the political agenda and should remain on the platform. However case of IGTV special: one case show political advertizing, and another matter — partially to sponsor it, parry in Instagram.

In addition to the above-mentioned, IGTV also prohibited partners to spread sponsor's content, to advance it on other platforms like YouTube and also to carry out lotteries and draws.

Instagram partially pays created content in exchange for a certain quantity of posts. The volume of the largest compensations reaches $250,000 for 20 posts. However while any of the most popular insta-bloggers of IGTV does not use, Bloomberg notes.

In October, 2019 it became known of date leak of 20 million users of Instagram. The corresponding database was offered for sale at the price of 2.8 bitcoins (about $22 thousand).

In open access there were nicknames of users, descriptions of profiles, e-mails and mobile phones, Izvestia  with reference to information of Device Lock writes. 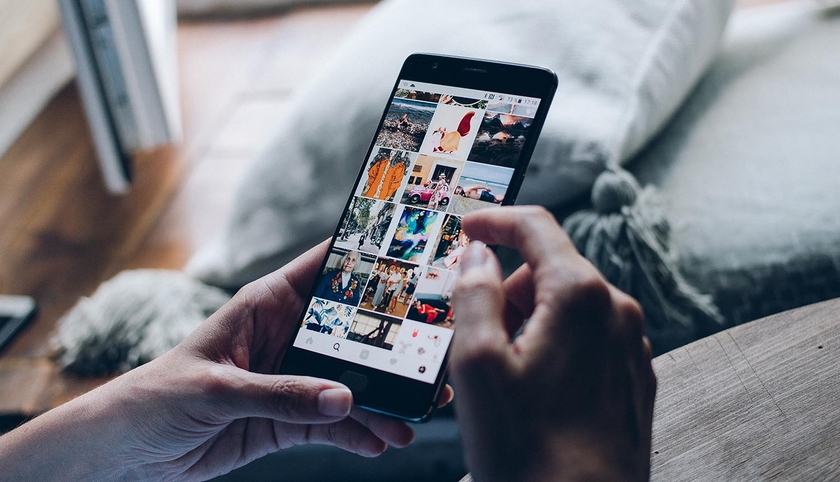 Journalists analyzed the "test" part of base placed in open access and confirmed that the data which are contained in it completely match information of real accounts.


The Device Lock company considers that this base could belong to the Indian marketing company which in May of this year left in open access own server on which the DB from 49 million lines which was copied by swindlers was stored.

Since then this information periodically emerges at the closed forums and specialized resources in the Darknet Perhaps, now malefactors try to sell a part of data which were stolen at the marketing company.


For users this leak is rather safe, unlike information leaks from banks or state agencies: it is difficult to swindlers to monetize the received data, Vladimir Ulyanov from Zecurion is sure.  The stolen information can be interesting to advertisers in Instagram.[1]

Instagram-inflyuenserov began to be trained at the university

In the middle of October, 2019 the Italian online university eCampus offered the three-year program for receiving degree for inflyuenser of social networks. This program is sponsored by a football star of Cristiano Ronaldo who not only participates in the advertizing campaign of college, but also finances 36 student's grants on this specialization. Read more here.

Filters in Instagram gave a powerful spur to cosmetics market

In the middle of September, 2019 the CEO of L'Oreal Jean-Paul Agon said that Instagram gave a powerful spur to cosmetics market — young women should give much more forces and time to a make-up to look good also, as in a selfie with filters of Instagram. Read more here.

In September, 2019 in seven countries of the world the updated Instagram feed without counter of likes is already available. Care of users because recently the opinion began to prevail that psychological state of the person directly depends on approval in social networks became an official cause of failure.

Attempts of Instagram to liquidate likes in fight for composure of users look improbably if to remember that the photo of egg placed within the advertizing campaign for mental health was the most popular publication for all history of Instagram which gained 53.7 million likes.

It is obvious that Facebook owning Instagram is going to limit earnings of bloggers-inflyuenserov and tries to increase the targeted advertizing revenues.

While ordinary users of the platform consider an innovation useful, popular inflyuenser in large quantities complain of infringement of the rights — without likes they cannot estimate the interests of subscribers: "Likes is a motivation. All the same that at the end of representation you do not hear an applause"

What does it speak about?

1) The network is seriously configured to strike blow to the industry of inflyuenser and business around this sphere. Judging by data of the last research of analysts of Cheq company, "brands spend more than $1 billion a year for cooperation with inflyuenser with fake subscribers".

3) Instagram is going to protect users from cyberbullying, having connected artificial intelligence to moderation of comments.

The new feature is already available to a number of users in seven countries of the world: Australia, Brazil, Italy, Ireland, Canada, New Zealand and Japan. In Russia the new interface is already tested, though not in large quantities.

At the end of July, 2019 researchers reported that the companies waste on targeted marketing in social networks more than $1.3 billion a year as many unfair users of social networks buy false subscribers or use services in wrapping of likes, viewings and comments. Read more here.

Zuckerberg forced founders of Instagram to leave the company, having appropriated their merits and having selected possibilities of growth

In April, 2019 the reasons of leaving Facebook company of founders of Instagram Kevin Systrom and Mike Krieger who resigned in September, 2018 became known. Announced the Wired edition the events preceding their leaving, having recovered a detailed picture on interview materials from 65 current and former employees of Facebook. 34-year-old Systrom held a post of the CEO of Instagram, and 32-year-old Krieger was senior technical[2].

Let's remind, Facebook announced purchase of Instagram for $1 billion in 2012. It was supposed that Instagram will save the name and a command, and with Facebook social network it will be integrated extremely carefully. Through some time after acquisition some top managers of Facebook had a feeling that rapid growth of Instagram exhausts from Facebook of an opportunity for growth and a scope of new audience. Really, Facebook helped Instagram grow, including due to providing the servers to it and the qualified engineers and also due to integration of two applications.

Communication of founders of Instagram with a command of Facebook took place not absolutely smoothly. Having used that Mark Zuckerberg began top management reorganization, Sistr and Krieger even allocated the head of News Feed of that time Adam Mosseri with powers of the official representative in Facebook. They needed the buffer which would protect Instagram from requirements of Facebook interposing in their matter.

On September 24, 2018 cofounders of Instagram Kevin Systrom and Mike Krieger announced leaving the company. Top managers do not speak about reasons for leaving, but media know of them.

According to sources of the The Wall Street Journal (WSJ) newspaper, several months prior to resignation co-founders of Instagram had with the management of Facebook (the company purchased Instagram in 2012) a conflict concerning degree of freedom of work of photoservice. Bloomberg specifies that top managers had with Mark Zuckerberg disagreements against the background of further development of Instagram. Top managers were disappointed that Zuckerberg participates in  the daily solution of the current tasks more and more, interlocutors of news agency say. 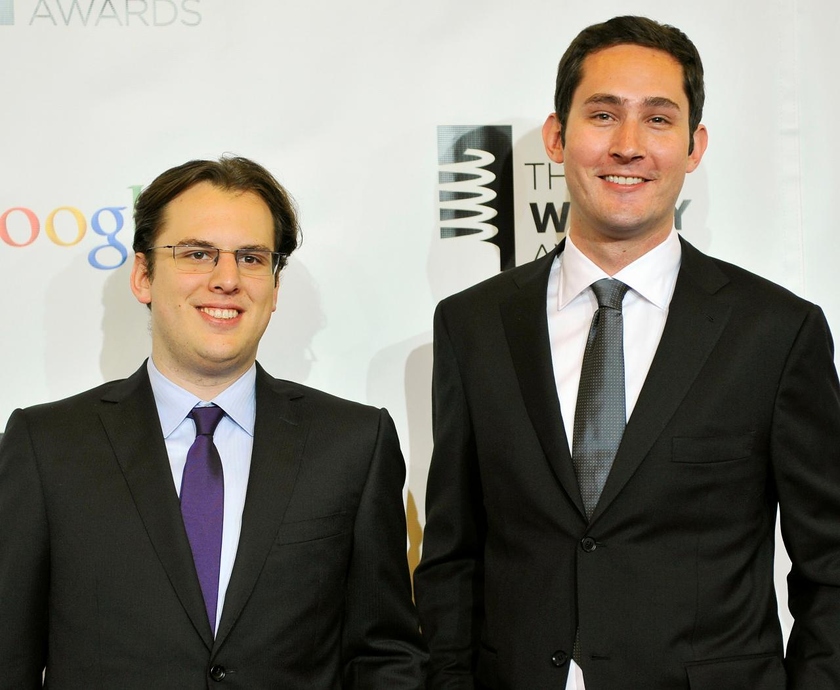 Cofounders of Instagram Kevin Sistrom (on the right) and Mike Krieger

In  June, 2018 Sistr in  a conversation with the Re/code edition noted that to Zuckerberg not just to overcome itself and to give a vent to heads, but he understands that this freedom helps the company to work better.

As notes Reuters agency, Instagram and Facebook work independently, and almost do not mention both services about each other. But as regulators pushed Facebook to improvement of personal data protection, fight against dependence on social networks and fake news, Zuckerberg and other heads began to put more and more pressure upon controlled companies projects and to monitor their work.

Earlier in 2018 Facebook was left by Jan Kum, the founder of the WhatsApp messenger which the world's largest social network purchased in 2014 for $19 billion.


In Silicon Valley considered purchase of Instagram correct for Facebook. At the same time the command of service remained small, and Sistrom had enough freedom for expansion of functionality of the application. Under his supervision Instagram had an opportunity to publish video, to place advertizing, to correspond between users in private and many other things.[3] 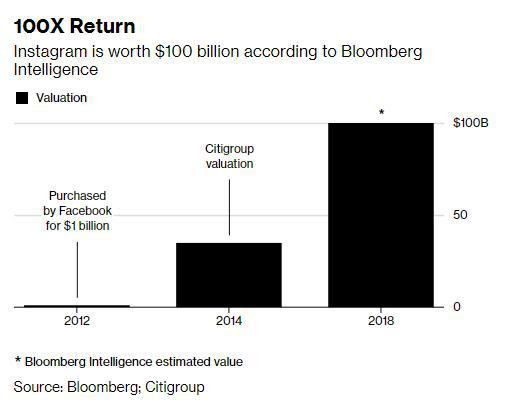 The last large assessment of an asset was carried out by Citigroup in 2014. Then Instagram was estimated at 35 billion dollars.

Within the coming 12 months annual revenue of Instagram will exceed $10 billion, the platform attracts new users quicker, than Facebook (Instagram belongs to the last), the analyst of Bloomberg Intelligence Dzhitendra Varal concluded in June, 2018. In June the platform overcame a mark of 1 billion active users in a month, it can double this indicator within the next five years, he considers. Besides, Instagram has younger audience, than at Facebook that does the platform more attractive to advertisers. If Instagram was the independent company, its cost would be more than $100 billion, the analyst of Bloomberg[4] counted [5].

In April, 2012 Instagram it is purchased by Facebook company. The purchase price was $300 million in cash and 23 million stocks of the company. In total the amount was $1 billion.

At the time of the transaction in Instagram there were only 13 employees.