Foundation of the company

On November 25, 1991 there was a Government decree of RSFSR No. 18 about creation of oil concern "Langepasuraykogalymneft" which was transformed afterwards to Open joint stock company "The Lukoil oil company.

The name "Lukoil" is formed of initial letters of names of the cities of Langepas, Uraj and Kogalym in which the main oil-producing enterprises which were a part of the Company are located. This name was offered by Ravil Maganov who at that time was the CEO of the Langepasneftegaz enterprise.

Reserves of oil and gas

Characteristic of resource base

The main part of the proved stocks of the Company belongs to traditional stocks. Only about 4% of the proved reserves of hydrocarbons of Group are the share of high-viscosity oil and 4% – on offshore fields. The similar structure allows the Company to control effectively costs for development of stocks and to quickly put new fields into operation.

The organizations of the Lukoil group in 11 countries of the world carry out exploration works which main task is hydrocarbon production completion by stocks and preparation of a source of raw materials for the organization of production and ensuring its accelerated growth in perspective regions as in the territory of Russia, and abroad (Timano-Pechora, the Northern Caspian Sea, Bolshekhetskaya Depression, Ghana). When conducting exploration works the Company pays special attention to use of modern technologies that allows to increase efficiency of geological exploration considerably.

The main volumes of exploration works on oil and gas were concentrated in areas of Western Siberia, the Timano-Pechorsky oil-and-gas province and on the international projects. The largest search projects – additional exploration of the Central Astrakhan gas-condensate field, search works on the water area of the Caspian Sea for the purpose of assessment of perspectives of oil-and-gas content of Neocomian deposits of the Shelly field and deposits of the lower chalk and Yura on structure of Ukatnaya.

In 2010 for identification and detailing of structures and also for preparation for underlay of explorative wells on perspective objects the Company considerably increased volumes of seismoprospecting works 2D which made 6,178 km in comparison with 2,446 km in 2009. 17% of works were the share of the international projects in connection with expansion of activity of the Company abroad. The volume of seismoprospecting works 3D also increased and reached 5,840 sq.km, at the same time 30% of works were the share of the international projects. In recent years the quality of such works, speed of processing and interpretation of data grew. It is connected first of all with implementation of the latest information technologies. Thanks to high quality of seismic exploration the success of explorative drilling on Group steadily exceeds the level of 70%.

The volume of electroinvestigation was 793 km. The vertical seismic profiling allowing to detail a geological structure around already drilled well was executed on 8 wells. Passing in prospecting drilling in 2010 made 118.8 thousand m. The efficiency of exploration works was 1,143 tce per meter of passing in drilling. For 2010 are finished with construction of 32 explorative wells, from them productive – 22.

In 2010 6 fields (Olginskoye in Tatarstan, Dulepovskoye in Perm Krai, Southeast Kyzylbayrak and West Aral in Uzbekistan, Arcadia in Egypt and Dzata in Ghana) and also 25 new deposits of oil on fields in Western Siberia and Perm Krai are found.

Increase in the proved stocks according to the SEC standards as a result of exploration works and obtaining the additional information at implementation of development drilling was 625 million BOE. The main organic gain of the proved reserves of oil was received in Western Siberia (68% of a total gain) and in the Komi Republic (12% of a total gain). Costs of the Lukoil group for conducting exploration works in 2010 made 435 million dollars.

The main objective of the exploration works which are carried out abroad is preparation of a source of raw materials for the fastest organization of production. In 2010 passing in prospecting drilling on projects in which the Group participates made 17.3 thousand m. The share of the Company of seismoprospecting works 2D on the international projects made 1,102 km, 3D – 1,724 sq.km. Costs for geological exploration made 199 million dollars.

As of the end of 2010 the Lukoil group conducted exploration works in 9 countries of the world outside Russia – in Colombia, Kazakhstan, Saudi Arabia, Uzbekistan, Côte d'Ivoire, Ghana, Egypt, Venezuela and performed preparation for production in Iraq.

Oil production by the Lukoil group in the territory of Russia in 2010 made 89,767 thousand tons, including was extracted by subsidiaries 89,431 thousand tons.

In 2010 hydrocarbon production by subsidiaries and affiliates of JSC "LUKOIL" in the territory of Russia was performed on 355 fields. Volumes of development drilling in Russia were slightly reduced and were 2,286 thousand m. The operational well stock for the end of 2010 made 28.61 thousand wells, including 24.42 thousand giving products.

For the period January-December, 2017 oil production in Russia:

Oil production on the international projects in a share of the Lukoil group made 6,225 thousand tons that there is 8.3% more than the level of 2009. Growth of volumes of production was generally provided with projects Tengiz and Northern Buzachi in Kazakhstan, Southwest Gissar in Uzbekistan and Shah Deniz in Azerbaijan.

The main part of natural gas production in Russia (more than 90%) was provided by the Nakhodka field of Bolshekhetskaya Depression. In 2010 on it 8.2 bcm of natural gas were extracted that is 37.1% more than an indicator for 2009 as a result of growth of purchases of gas from JSC Gazprom.

Indicators of production of the companies in 2017:

Extraction of commercial gas on the international projects in 2010 grew by 16.2% in comparison with 2009 and was 4,919 million m3. At the same time the share of natural gas made 86%, having decreased by 6 items. The operational fund of gas wells of the Company for foreign projects as of the end of 2010 made 91 well, a well stock giving products – 73.

Total sales amount of oil Kompanii, including deliveries for processing at own and attracted oil refineries, in 2010 was 114 million tons. At the same time in connection with more high efficiency of an oil supply to domestic market in comparison with the majority of the directions of deliveries to foreign countries, essential volumes of oil were reoriented from the inefficient export directions on Kompanii Oil Refinery and domestic sale of the Russian Federation.

Oil supply on foreign gruppy «LUKOIL Oil Refinery, on the ISAB and TRN [1] complexes in 2010 made 20.97 million tons that is 15% higher in comparison with 2009 as a result of acquisition of a share in TRN Oil Refinery in September, 2009. An oil supply to processing to the third-party plants in reporting year practically stopped (volume was 0.11 million tons) that is caused by the termination of oil refining at third-party oil refineries in Belarus at the end of 2009 in connection with decrease in profitability of such transactions. In the third quarter 2010 the Company began processing at third-party oil refinery in Kazakhstan.

3.6 million tons of oil were sold in the domestic market in 2010 that is 22% more, than in 2009. Increase in sales volumes is caused by the termination of oil refining at third-party oil refineries in Russia and Belarus that led to release of an additional resource of oil which was reoriented on domestic market.

Gas business is a new, dynamically developing segment of activity of the Lukoil group. Its expansion is one of strategic tasks and is directed to commercialization of reserves of gas and value addition of the Company.

In 2010 the sales amount of a natural, associated petroleum and stripped and dry gas the Russian organizations of Group was 14,087 million m3 that there is 29% above than the level of 2009. Including the Group implemented 10,051 million m3 of gas to JSC Gazprom (including more than 8 bcm of natural gas from the Nakhodka field of the Company) and 4,036 million m3 of gas – to other consumers. Increase in sales amount of gas is caused by growth of the global demand for gas and corresponding canceling of restrictions on acceptance of gas from JSC Gazprom. Besides, in reporting year more than supply of associated petroleum gas from resources of LUKOIL-West Siberia LLC to Purgaz Ltd due to setting to operating mode of the North Gubkinsky field put into operation in June, 2009 was three times increased.

For the purpose of cost minimization in reporting year the Company carried out preparatory work on signing of the contracts on gas supply directly to end consumers (in particular YuGK TGK-8 LLC), passing intermediaries.

Cost of production of an oil barrel of $10.2

Bloomberg on the basis of data of IFRS of 2019 made calculation of cost of production of an oil barrel at three largest Russian companies: Lukoil, Rosneft, Gazpromneft. At all three it does not exceed $12 for barrel. 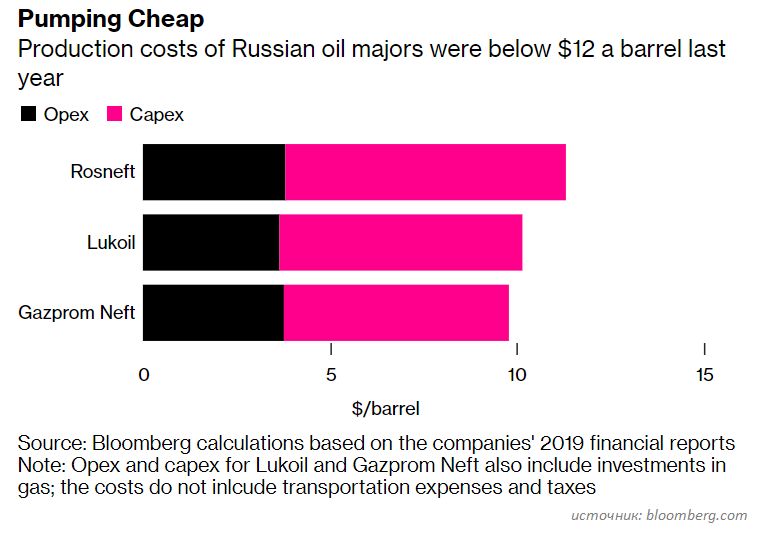 Lukoil closed top-10 the world ranking of The Boston Consulting Group (BCG) of the companies which provide to shareholders the greatest gain of investments. BCG publishes rating 21 years and takes into account how many for the five-year period shareholders could earn from purchase and sale of shares – taking into account the dividends received during this time. Profitability from shareholding of Lukoil from 2014 to 2018 made 27.1% – more, than at Novatek (23.5%) and also Sberbank (16.6%), BCG writes. At the end of 2018 only these three Russian companies passed in top-50[2].

The Chinese and American companies advance Lukoil. The leader – the developer of the graphic processors Nvidia (54.4%), he is followed by producer of media content Netflix (38.5%), the Chinese investment company Tencent Holdings (43.5%) and food holding Kweichow (29.3%).

In the industry ratings of BCG according to the results of last year seven Russian companies: ALROSA – the fourth among mining companies, Evraz, MMK and Severstal – in top-10 in the rating of metallurgists (the 3, 5 and 10 places respectively). 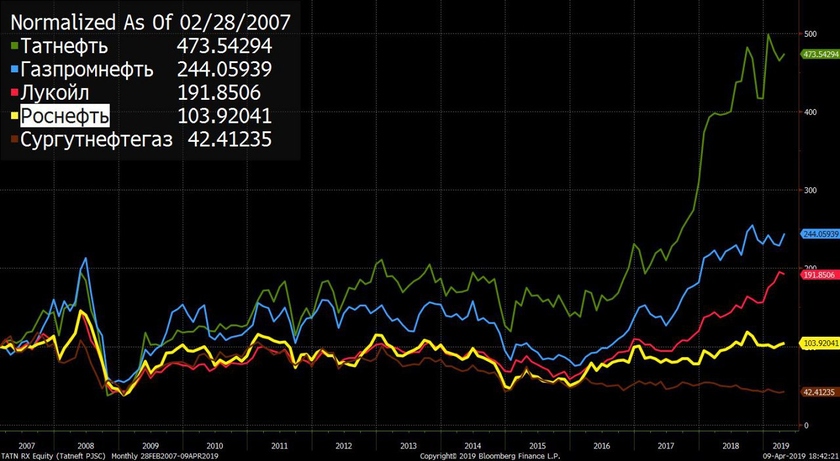 Dollar share yield of oil industry workers of the Russian Federation taking into account dividends from the moment of the IPO of Rosneft.

The 356th place in the rating of the most expensive brands

In the rating of the most expensive brands which was published on January 22, 2019 by consulting company Brand Finance, Lukoil was at the 356th place against the 363rd the previous year. The cost of a brand of oil giant was raised for 19.7% and reached $5.8 billion.

2013 was successful for the company in respect of growth of operational indicators (production grew by 1.5% up to 2.2 million barrels AD in day) and the high prices of oil. However revenue grew only by 1.6% of yoy to $141.5 billion, and net profit decreased by 30% of yoy to $7.8 billion. The truth is falling has "paper character" – a number of assets in the Nenets Autonomous Okrug, Africa, the USA, Italy and in Ukraine was written off. Growth of a net debt and capital costs of 28% in comparison with 2012 (to $15.4 billion). By 2016 Lukoil is going to pass to the reporting under IFRS – perhaps, in the present reporting preparation for transition to the new standard began. Besides, we will remind, earlier Lukoil refused plans of SPO in Hong Kong.

The net profit of Lukoil Oil Company in the third quarter was 2011 $2.2 billion in comparison with $2.818 billion the previous year.

According to the results of the first nine months profit was $9 billion. Meanwhile, analysts expected that these indicators will be at the level of $3.064 billion and $9.832 billion, respectively.

The forecast of Raiffeisen Bank which experts predicted the net profit of Lukoil in the amount of $2.594 billion and $9.362 billion, respectively was the most exact.

Significant growth of financial performance is explained, mainly, by increase in prices for hydrocarbons during 9 months 2011 in comparison with the same period of 2010.

On net profit for the third quarter 2011 the losses connected with impairment of ruble in the amount about $570 million including tax expenses had a negative impact on profit on exchange differences of the Russian enterprises of group in the amount about $340 million, the company explains.