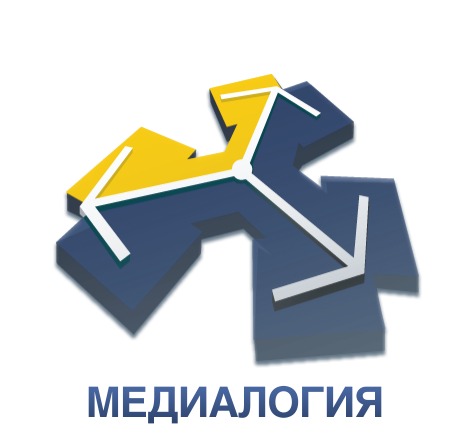 Medialogiya - the company developing the analysis system of information of the same name from media which was developed in IBS Group Holding group. Medialogiya solves problems of monitoring and the analysis of media and social media, allows to estimate efficiency of PR and marketing communications.

For the beginning of 2019, the database of the companies covers 40 thousand publishers of the federal and regional level. The company automatically processes 500 thousand media reports and 50 million messages in social media in day.

Medialogiya has own semantic technologies for the analysis of difficult structured texts, determination of tone of publications (negative and positive), determinations of key events and persons of publications, thematic groupings of articles on m events, etc. The company monitors not only the text, but also a photo and video content.

In addition to standard services of analytics and monitoring, the company offers the bonus services GLASS and Electronic office allowing to create a picture of day, personal media base, a workplace of heads and to control the set indicators (KPI). Products of the company are available via the web interface, mobile applications and plasma screens.

Also implementation of special projects under the order is possible. Media, the PR-agencies, bodies the governments, the large companies, political parties, etc. use services of Medialogiya.

In January, 2019 it became known that VTB acquired 63% of shares of Medialogiya company which is a system developer of monitoring and the analysis of mass media. Data SPARK[1] demonstrate to it[2].

To the transaction the IBS Group Holding group (IBS Holding) belonging to Anatoly Karachinsky and Sergey Matsotsky was the owner of a share of 62% in size. Now this share passed VTB.

Sergey Matsotsky continues to own a share in 21% in Medialogiya. 16% belong to the CEO of the company Alexander Volkov.

The Telegram channel "Mediatekhnolog" reported that VTB had two reasons for the transaction: requirements of intelligence agencies to consolidate monitoring in their interests. After the transaction, in addition, they allegedly have an access to unloadings of users, operation algorithms with social networks and including with Telegram change.

The second reason - the interests of protection of reputational risks for VTB and personally the head of bank Andrey Kostin.

Officially the first deputy president-chairman of the board of VTB Yury Solovyov in the comment for RBC explained that this transaction is a part of business of direct investments of VTB Group. The investment idea of the transaction, according to him, consists in effectively to use opportunities for carrying out different marketing researches for brands, with a depth of the analysis and width of a scope unavailable during an era of offline media.

​ "Advanced technologies of the company will allow not only to take reliable measurements of media metrics, but also it is essential to increase efficiency of targeted promotion companies and, respectively, return from expenses on advertizing budgets" — he explained RBC.

In group expect growth of operational indicators of the company within three years. After that the asset can be potentially interesting to the large IT companies and large media holdings, Solovyov added.

The analyst of Finam Leonid Delitsyn estimates the company at 3.2 billion rubles.


Yury Solovyov does not exclude a possibility of resale of the company.


2018: The analysis Ernst&Young activity of business of the company before sale 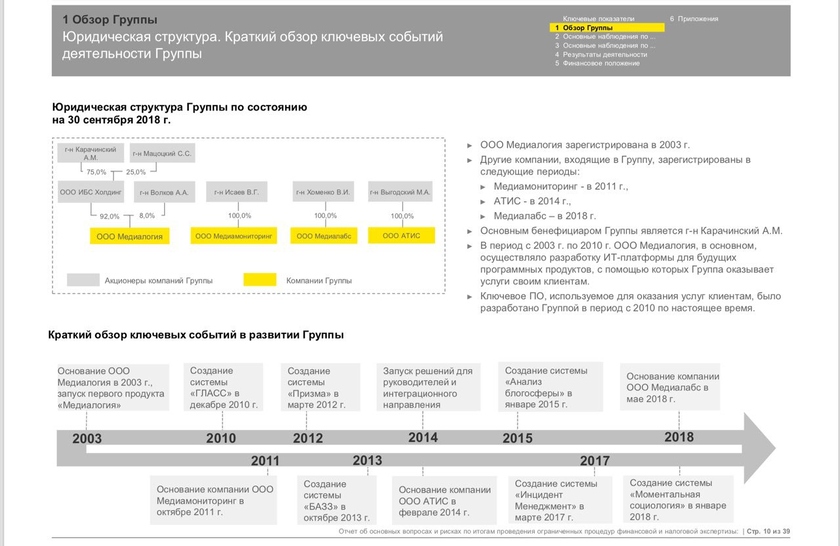 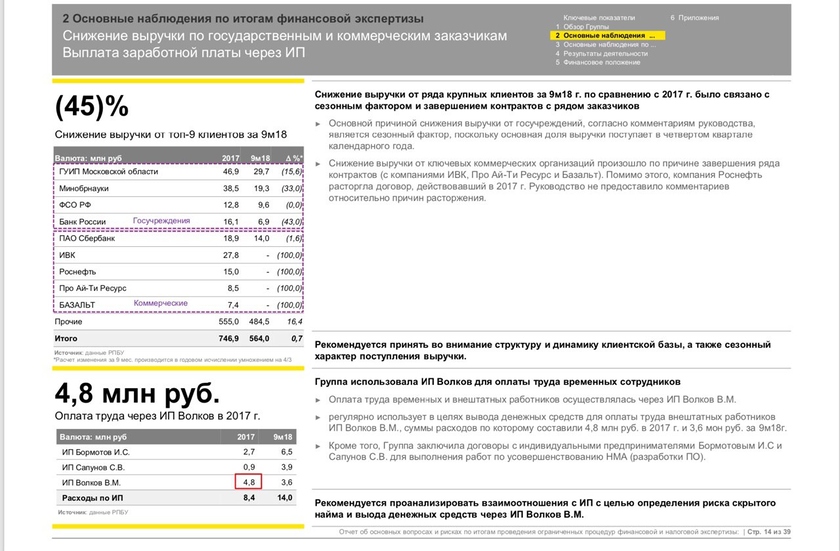 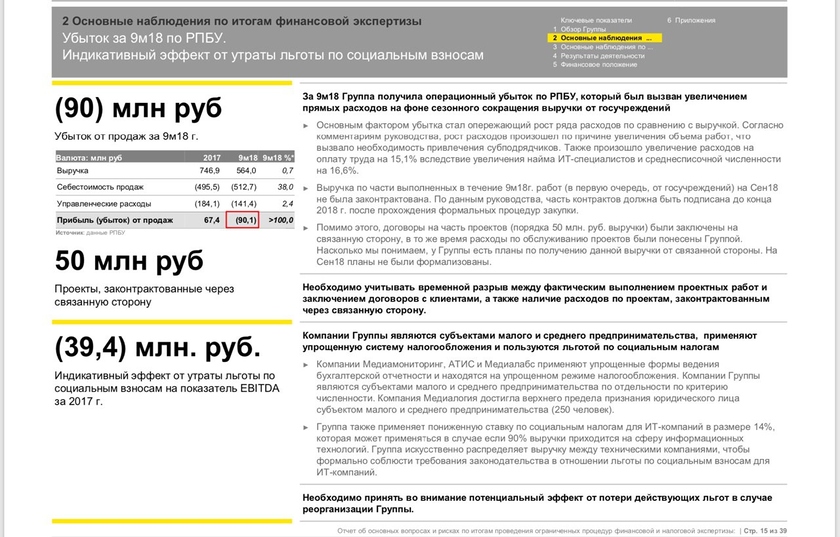 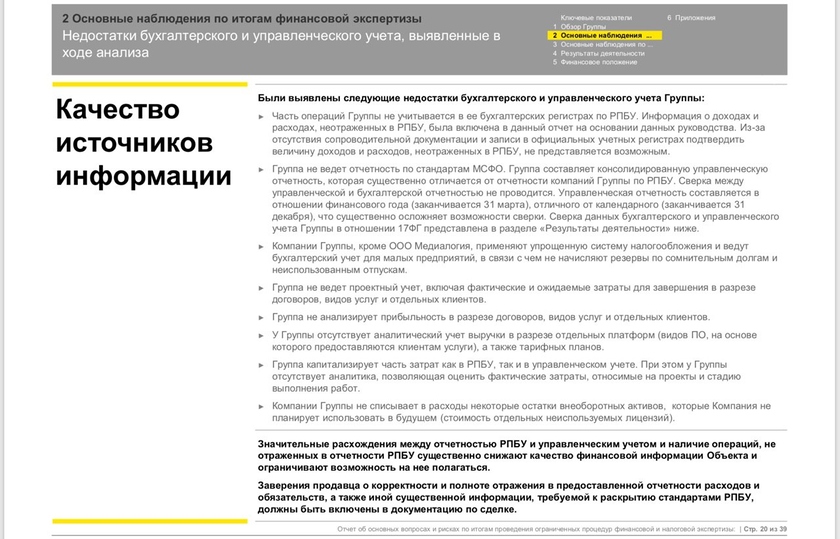 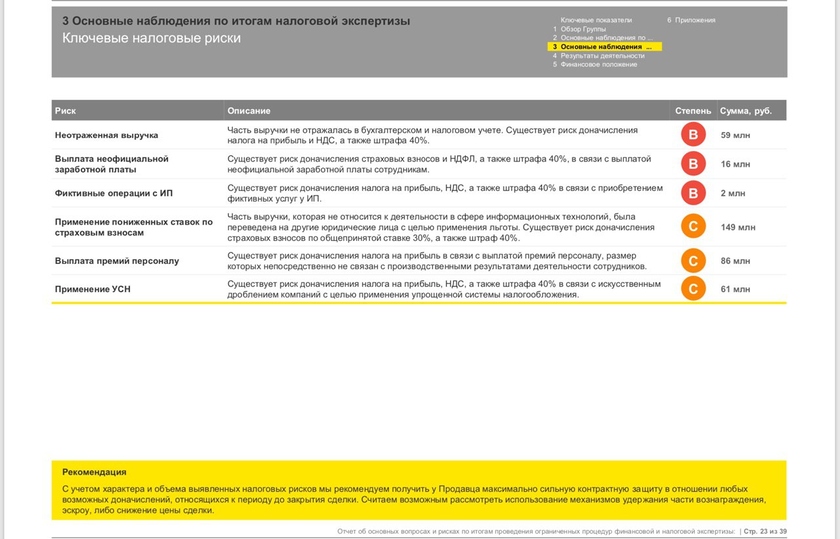 2016: Loss of the contract with the Kremlin and White House

By the end of 2018 the total amount of prisoners of Medialogiy of government contracts was 2 billion rubles. Implementation of monitoring of media and social networks for the Russian President Administration and the Government of the Russian Federation was the most status contract. However in 2016 the contract with the company was not prolonged.

According to the Vedomosti newspaper, FSB had claims to the company because of its accessory to offshores. After that shares in Medialogiya were rewritten on the Russian owners, but this step did not help. The M13 company which developed a monitoring system Katyusha became the new supplier of the Kremlin and White House.

Owners are ready to sell the company

It is interesting that in 2011 owners of Medialogiya considered the possibility of its complete sale. It is said in the correspondence stolen by hackers from the Humpty Dumpty group from the journalist Alexander Budberg, the husband of Natalya Timakova, the former press secretary of the prime minister and the ex-president Dmitry Medvedev.

The uniform contractor of the state order within GP "Information Society"

Medialogiya LLC is determined by the only contractor of the state order for execution of works by information technically support, upgrade, development of program technical means of a subsystem of monitoring of media in the special purposes. It is placed the Ministry of Telecom and Mass Communications of the Russian Federation within implementation of the state program of Russia "Information society (2011-2020)"[4].

Also Medialogiya it is recognized by the only contractor of the state order for execution of works on creation of high technologies for ensuring the innovative development of a subsystem of monitoring of media in the special purposes. It is placed the Ministry of Education and Science of the Russian Federation within implementation of the FTP "Research and development in the priority directions of development of a scientific and technology complex of Russia for 2007-2013".

In 2010 the company occupied 30% in the market of monitoring of media. Customer segmentation of the company was following: 20% are banks, 16% are the PR-agencies, 8% are media companies, 7% - on the IT sector, on 6% - the state organizations and management and investment companies, 5% - the telecommunication sector, on 4% - regional administrations and the real estate, on 3% - energy industry and political parties.

At the same time in a segment of bonus services of 58% 11% - on bodies of the regional power, another 15% - on banks were the share of bodies of the federal authority. In a cost structure of Medialogiya of 65 - 70% it was the share of personnel.

2006: Transfer of the company in Oradell Equites fund

In the middle of the 2000th years together with other venture projects of the IBS group it was selected in the Oradell Equites fund under control of founders of IBS. It was connected with preparation of an exit of IBS to the IPO. In 2007 IBS carried out the IPO on the Frankfurt stock exchange, but in 2014 left it.

2003: Creation of the company. The CEO - Anatoly Karachinsky's spouse

By Medialogiya it was created in 2003 as the project of the IBS Group group created based on IBS system integrator. At first the company was headed by Nina Grigorieva, the spouse of the founder and the main owner of IBS Anatoly Karachinsky.