The METALLOINVEST management company is formed in 2006 for the purpose of effective management of the assets belonging to holding. The METALLOINVEST holding performs the activity in the mining industry, ferrous metallurgy and also heavy mechanical engineering.

Metalloinvest is the producer and the supplier of iron ore products and hot-briquetted iron (GBZh) in global market, one of regional producers of high-quality steel. The company has the world's largest developed iron ore fields and has some of the lowest indicators of cost of production of iron ore.

For March, 2014 Metalloinvest for 100% is controlled by USM Holdings company which largest beneficiary is Alisher Usmanov (60%). As other shareholders of USM Holdings Vladimir Skocha's structures (30%) and Farkhada Moshiri (10%) act.

Metalloinvest is the largest in Russia and the world's second mining company on reserves of iron ore. The company conducts development of fields with explored reserves of iron ore on the international classification of JORC — 14.2 billion tons that at the current production level for 2019 guarantees about 140 years of the operational period. 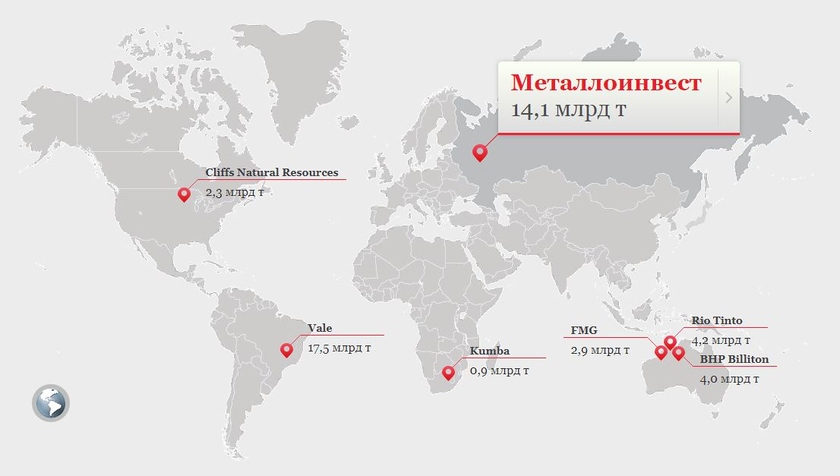 On the card the confirmed and probable reserves of ores on classification of JORC for 2016 adjusted for the volume of the extracted ore for December 31, 2016 (Metalloinvest) are provided.

Metalloinvest - leading manufacturer of iron ore raw materials and hot-briquetted iron in the world. For the beginning of 2020 the company manages the following assets:

On March 7, 2014 Metalloinvest Management Company created new collegiate organ – board from 11 people, the CEO of the company Andrey Varichev is appointed the chairman.

Except Varichev entered into board:

"Formation of new collegiate executive body is directed to further improvement of corporate management and gain of attention to operating activities. Involvement of managing directors of the enterprises will promote determination of the most effective ways of development of the company in general", - Varichev's words are cited in release.

2020: The head of Metalloinvest holding died of pneumonia

On April 27, 2020 it became known of Andrey Varichev's death. The head of Metalloinvest died from pneumonia, TASS with reference to the press secretary reports the governor of Kursk region Roman Starovoyt Anastasia Gurina. Read more here.

1992: Acquisition of the Moscow institute "Gipromez"

In 1992 Gipromez was incorporated (JSC Gipromez is formed), on the basis of branches in the 1990s the independent organizations were formed (Azovgipromez, Sibgipromez and others, with the patrimonial name "gipromeza"), Moscow Gipromez is purchased by Metalloinvest company.