North Atlantic defense Alliance. In its structure of 28 member countries. 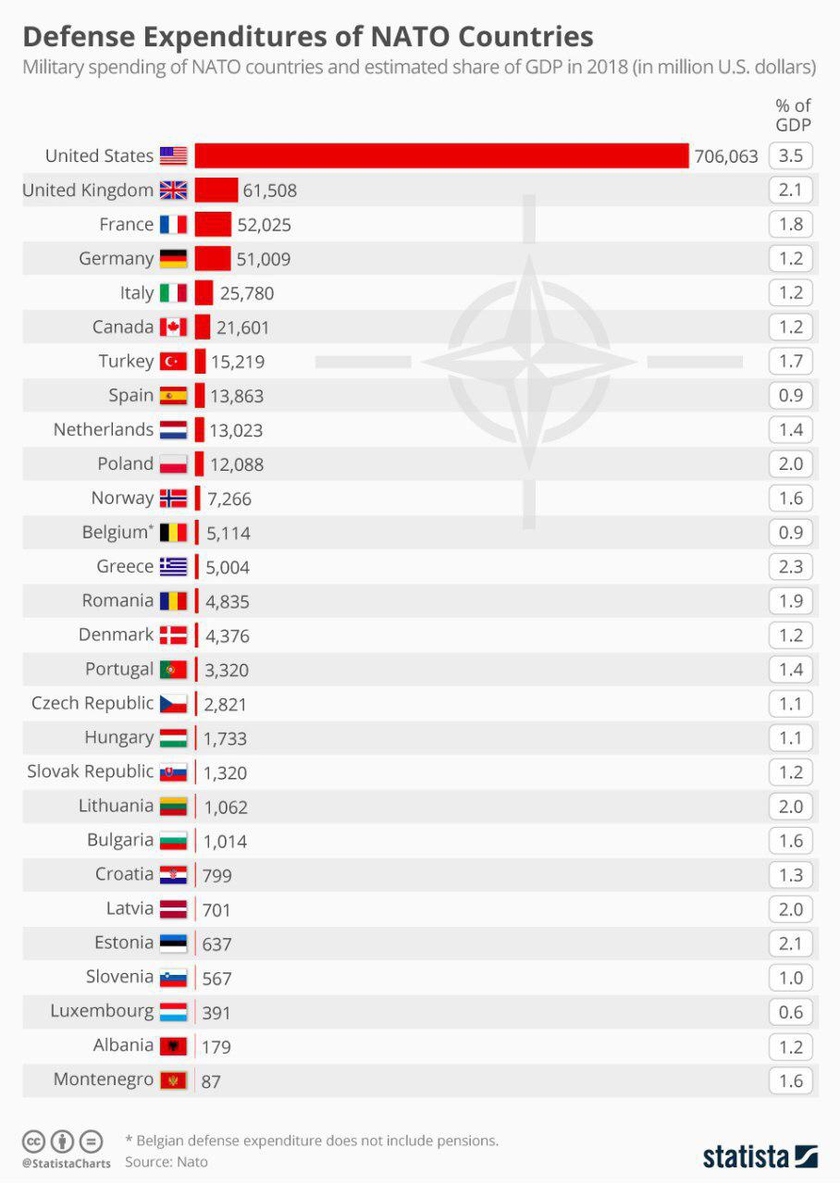 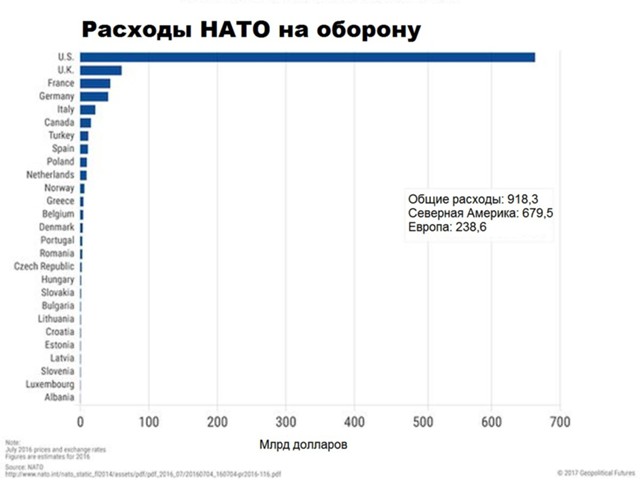 Expenses of the countries of NATO on defense, data of July, 2016.

2020: In what countries support NATO 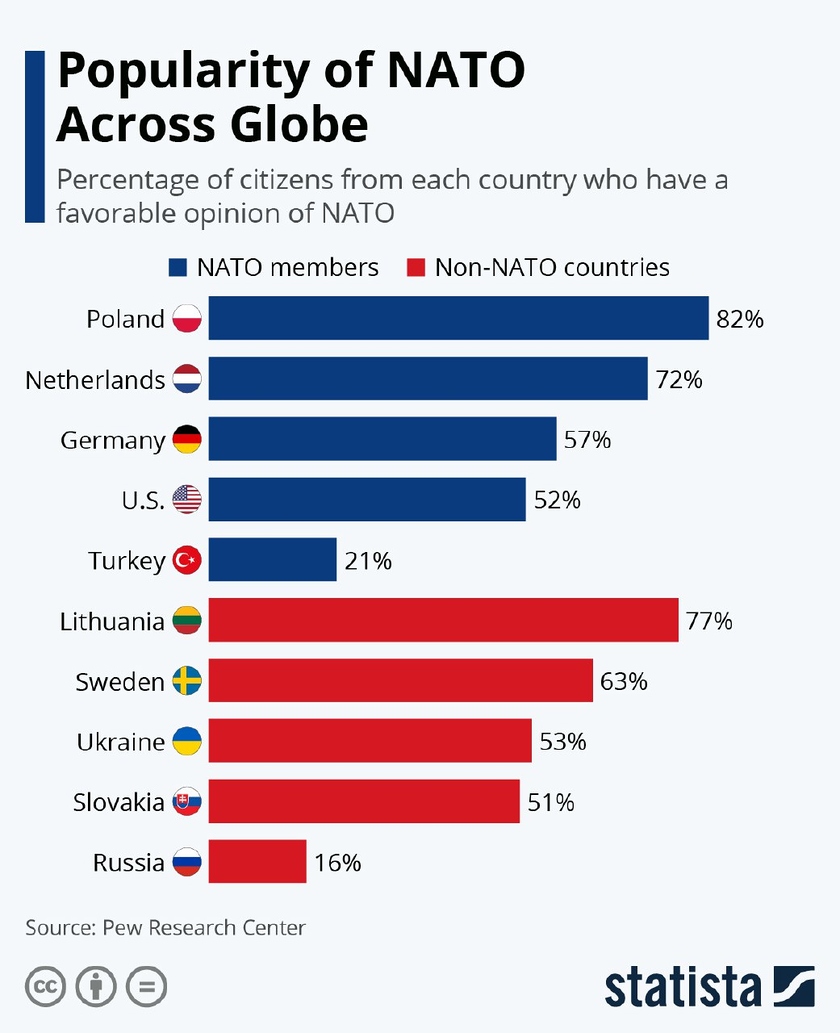 In what countries support NATO

Most of all supporters of NATO in Poland - 82%. It is the good result as among NATO member states, and in general on the world. In the same USA only 52% of the population are positive for NATO, and in Turkey at all - 21% (at the same time Turkey - the member of NATO)

From the states which are not entering into NATO on the first place Lithuania (77%). Is positive to the North Atlantic Alliance also in Sweden (63%), in Ukraine (53%) and Slovakia (51%).

Russia does not love NATO especially strongly: only 16% of the population are positive to its activity.

In the middle of April, 2019 NATO staged large-scale exercise on cybercracking – commands of several countries worked against the thought-up hackers trying to cause chaos during elections in the small fictional country.

The purpose of such annual exercises which are taking place under the name Locked Shields is in checking protection of national IT systems and crucial infrastructures during powerful cyber attack. This the action largest in own way is organized by the Center of the best practices on joint protection against cyberthreats (CCDCOE). Organizers of exercises were in Tallinn (Estonia), and participants played from the bases. 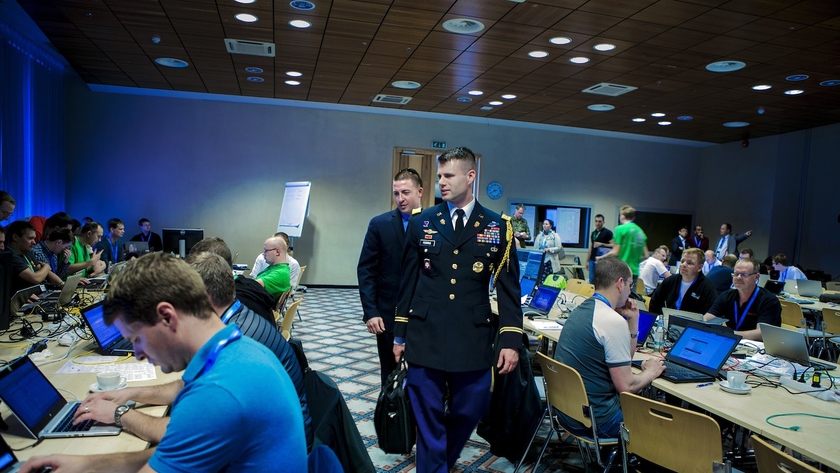 According to the scenario, hackers attacked the fictional island country during elections. The coordinated cyber attacks are directed to destruction of the systems of water purification, power supply, 4G networks and other important components of infrastructure. Hackers also try to undermine confidence of citizens to results of elections that conducts to public disorders. Commands played a role of the national rapid response team unrolled for assistance in fight against cyber attacks. Participants had to support nearly 4000 virtualized systems, to announce incidents, to make strategic decisions, to solve judicial and legal problems and also to process requests from game media.

According to Lauri Lukht (Lauri Luht), the head of Cyber Exercises in CCDCOE, in 2019 exercises were directed to more difficult attacks. The main technical objective of a game — to support work of the different systems in an extreme situation, however there are also strategic tasks directed to the solution of different effects of cyber attacks including in interaction with law enforcement agencies and media.

In 2019 exercises were won by a command from France, and the Czech and Swedish commands took the second and third places respectively.[1]

2017: NATO opens the center of cybertransactions

NATO will create the general center of cybertransactions which will integrate capacities of member countries in a cyberspace, having left them however under national administration. Meetings of members of NATO in Brussels the secretary general of alliance Jens Stoltenberg reported about it in November, 2017 on ministerial, TASS[2] reports [3].

According to him, consolidation of potentials will be performed according to rules of international law. The secretary general reminded that cybernetic opportunities of alliance were already applied with sufficient efficiency in fight against the Islamic State terrorist group.

Actually the alliance intends to recognize a cyberspace separate field of activity along with more traditional spheres of the presence — the earth, water and air — and to bring to the same level the organization of the actions in this new sector, writes the Bloomberg edition. The cybernetic element will be integrated into all transactions of NATO that will be approved with expansion of the sphere of collective protection in 2014 when the alliance agreed about joint reflection of cyber attacks.

The decision on consolidation of cyberpotential was was made against the background of upgrade of command structure, the first since Cold War. During this upgrade the number of the headquarters of NATO will be increased from seven to nine. One of new headquarters will focus on sea security in Atlantic, another will be responsible for movement of troops in Europe.

According to the new policy of NATO, along with counteraction to terrorism the alliance will actively operate on two fronts: warnings of emergence of traditional military threat and fight against risk of the hybrid war including cyber attacks.

In the present status NATO locates personnel in 6.8 thousand people in seven headquarters. It is much less, than in end times of Cold War quarter of the century back when the staff of alliance totaled 22 thousand employees in 33 headquarters, Bloomberg notes.

2016: The NATO Secretary General announced a cyberspace a zone of military operations

The cyberspace will become one more sphere of influence of NATO, on an equal basis with the sea, air and the land. It it was stated according to the results of the meeting of Ministers of Defence of member countries of the North Atlantic Alliance which took place in Brussels at the beginning of 2016.

The NATO Secretary General Jens Stoltenberg called a cyberspace a new field of fighting: "Cyber attacks can become the reason of application of the agreement on collective defense as we consider them as very dangerous actions capable to do serious harm. And, as I already spoke, it is difficult to imagine the conflict without actions in a cyberspace".

Within counteraction to cyber attacks near Tallinn the special center where there are experts from 15 countries is already unrolled. Here actions for reflection of attacks in a cyberspace which become more and more sophisticated and numerous are fulfilled.

As, all international conflicts have a digital component now, NATO updated in the summer of 2014 the policy of virtual defense that it was clear that cyber attack can be considered as an attack equivalent using conventional weapons.

The policy of cyber defense of this organization specifies that a digital attack to the member state of NATO, gets under the 5th article of the agreement on collective defense. There it is specified that attack on one of members of NATO "will be considered as attack on all" and opens a way for other organization members to taking measures against an aggressor — including use of the armed force for security recovery.

Jamie Shay, the deputy assistant to the secretary general for security risks, told: "For the first time we say directly that the cyberspace becomes covered by Article 5 of the Washington agreement, in point of collective defense. We do not say under what circumstances or at what threshold of attack the collective answer of NATO will be given, and we do not say what this answer should be. "It will be solved allies on an individual basis, but we set the principle according to which at a certain level of damage, malicious intent, cyber attack can be considered as an equivalent of armed attack".

The new policy was approved by the Minister of Defence of NATO and will be approved at the summit in Wales in September, 2013. Other elements of policy will promote improvement of information exchange and mutual assistance between allies, to cyber defense strengthening, preparation and NATO exercises and also enhancing cooperation with the industry.

For a number of years there are disputes on whether the digital attack can have the same effect as attack using conventional weapons. The event which took place in 2007 when Estonia faced digital attack on its critical infrastructure cleared a situation (since 2008 in Tallinn there is a center of the best practices of cyber defense of NATO — NATO Cooperative Cyber Defence Centre of Excellence).

After the Estonian incident, many claim that expanded and heavy digital attacks on the state can be considered an equivalent of physical attack, but, updating of the policy, NATO specified the position on this question.

A number of members of NATO — first of all the USA and Great Britain — built the opportunities for a cyber war for the last several years, including capabilities to attack opponents digital means and also to protect itself. However because of the unusual nature of a cyber weapon as it, generally difficult pieces of the malware constructed on vulnerabilities of zero day in the commercial software is difficult to use them as a restraining factor.

Christian Mark Layflender, the adviser for policy issues of cyber defense of NATO, told: "The cyberspace differs in the fact that when you speak about the concept of control, for example, we can count tanks, airplanes, the ships, and we know what the opponent has. But when it comes to a cyberspace question when you show what you have, you lose it at once. So it is difficult to show your determination and readiness to react without issuing this opportunity that does a situation not really transparent — difficultly to see what who has".

2011: An attack on fuel trucks in Pakistan

On August 22, 2011 in 25 km to the south from the city of Quetta in Pakistan about 12 armed men on motorcycles set fire to trucks which drivers expected police maintenance on the route conducting on the South of Afghanistan.

It is known that former similar diversions were committed by Talibs. 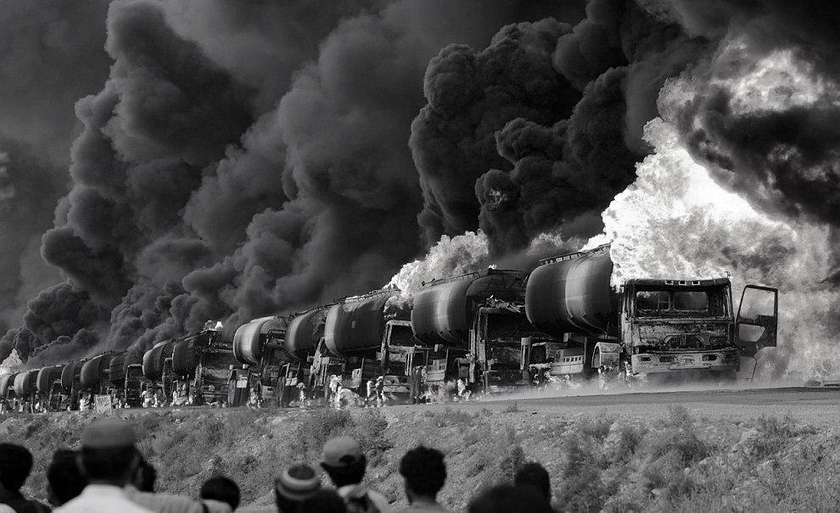 The convoy of fuel trucks of the countries of NATO which was ambushed in Pakistan more than 20 fuel trucks Were burned on August 22, 2011.

From March 24 to June 10, 1999, during war in Kosov NATO performed the military operation against the Federal Republic Yugoslavia. 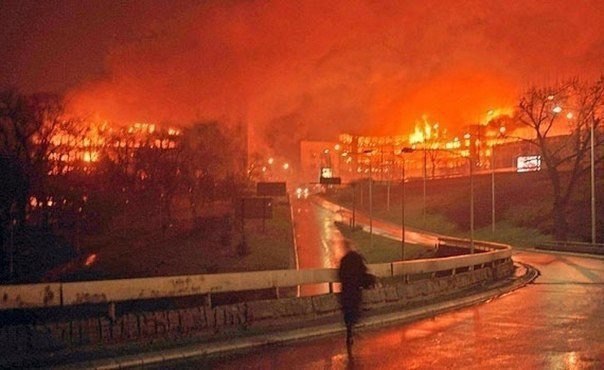 The burning Belgrade after airstrike of aircraft of NATO. Federal republic Yugoslavia, 1999.

On March 27, 1999 forces of air defense of Serbia brought down the American F-117A bomber near the Serbian village of Budzhanovtsa near the city of Ruma (40 km to the west from Belgrade). 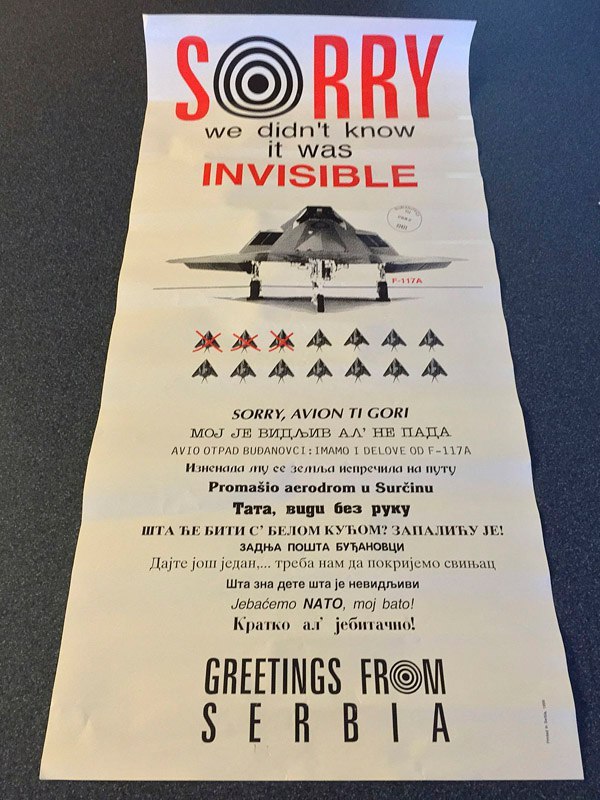 "Sorry, we did not know that it is invisible 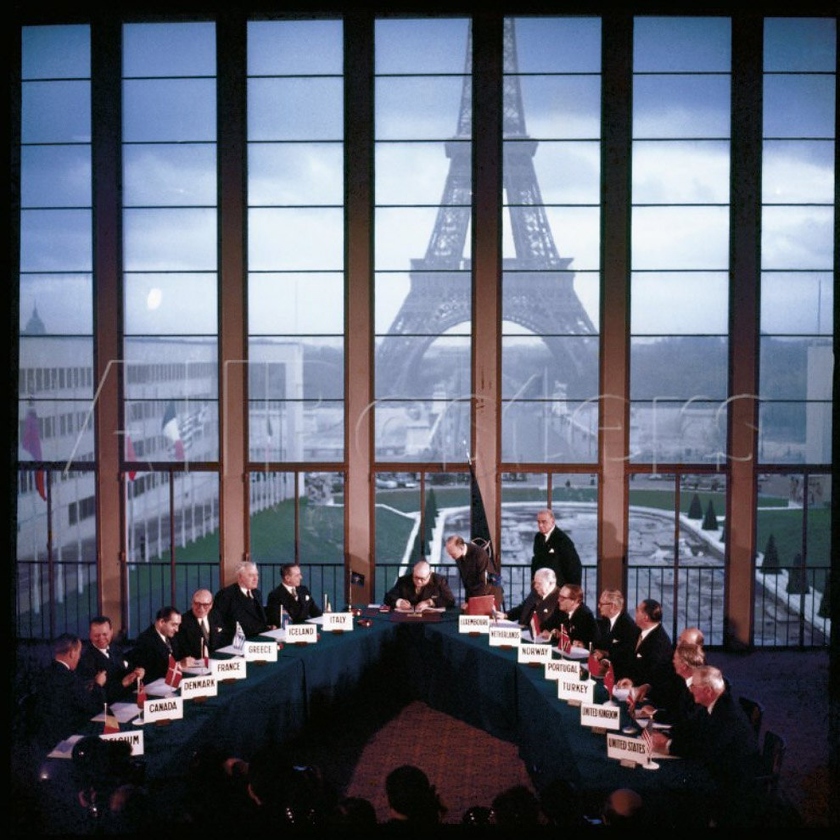