Nemo TV is a format of the family focused television, the complex video service working on OTT technology (Over the top – on network of any Internet service provider). In Nemo TV it is possible to watch television and film within one application – legally and in high quality.

Nemo TV includes more than 180 TV channels and about 5000 VoD-names (Video on Demand is video on demand). The Nemo TV service works on a paid subscription. In Russia 11 packets of TV channels are available. The average cost of a packet is 250 rubles a month. Service is available on Smart TV, on the normal TV using the Nemo Box HD prefix, on tablets and smartphones.

The company is founded in 2012. The Nemo TV service was officially started in the Russian market on March 1, 2014. Investments into the project made more than $20 million. Today the application of Nemo TV is available in 12 CIS countries and totals more than 800,000 users. In a company asset a number of professional awards. 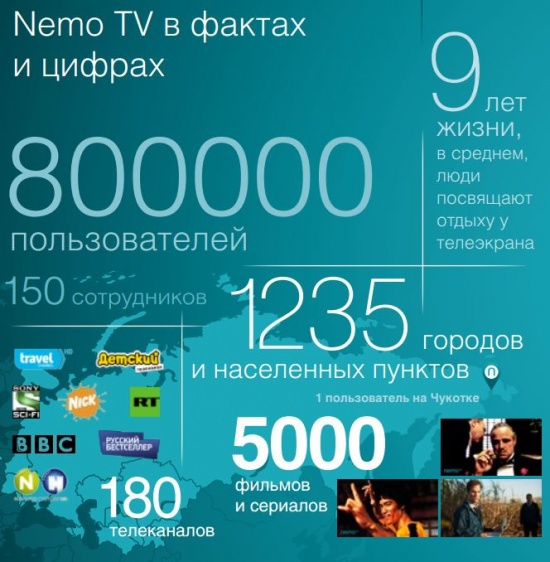 2016: As the Deputy Minister of Internal Affairs built the offshore empire for Internet television

Novaya Gazeta made investigation and found out [1] that the Deputy Minister of Internal Affairs RUSSIAN FEDERATION Alexander Makhonov through offshores owns a share in the London Nemo Telecom which develops the Nemo TV online TV own service.

As the edition managed to find out, in 2012 Makhonov together with the partner Dmitry Karjakin created on the Virgin Islands Nortwest Management Inc company (Nemo TV parent company). Same year service began to develop.

According to documents, Makhonov controlled 50% of Nortwest Management Inc since 2012. From now on in base no information on change of owners of the company appears. And on one of screenshots made by the employee of the company in August, 2013 it is visible that Makhonov still owns a half of Nortwest Management Inc. In it time Makhonov already served in the Ministry of Internal Affairs. At the same time under the law Makhonov is forbidden to be engaged in business activity and also to own foreign financial instruments, including actions.

Representatives of the Ministry of Internal Affairs, in turn, noted that at the time of Makhonov's acceptance on public service, he "had no relation to business activities of the offshore organizations", and in its declarations there are no references about foreign offshore companies.