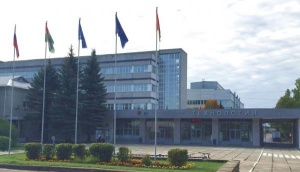 The schools of sciences "RT-Himkompozit" will acquire the official status

Three directions of research activity of the leading manufacturing enterprise "RT-Himkompozit" of the State ONPP "Technology" scientific center of A.G. Romashin will receive the status of schools of sciences. Such decision is made at a meeting of the academic council of the enterprise which took place with participation of veterans and young scientists and specialists.

The "Scientific Bases of Creation of High-strength Heat-resistant Glasses of Functional and Constructional Purpose" school which founder is the Doctor of Engineering professor, the creator of the scientific and technical direction "Constructional Optics" Serafim Brekhovskikh, will generalize activity in the field of research and development of production technologies of products of constructional optics.

The second school of sciences will solve problems of increase in system effectiveness of researches, developments and implementation in production of polymeric and composition materials and training for this direction. The Doctor of Engineering Andrey Savin, the famous domestic researcher in the field of the polymeric and composition materials (PCM) thanks to whom at the enterprise the first in domestic practice production of large-size, integrated, power constructions from PKM for the aviation and world-class missile and space equipment was organized became the founder of this scientific direction on ONPP "Technology".

Also the "Structural Ceramic Materials, Constructions, Manufacturing Techniques and Ensuring Operability of Heat-stressed Products from Ceramics" direction which accumulates unique experience and knowledge of the enterprise in the field of creation of products from ceramic materials will be brought to the level of school of sciences.

The academic council of ONPP "Technology" is going to discuss an issue of giving of the official status to this school at the next meeting. A founder of the direction is the first CEO of the enterprise Alexander Gavriilovich Romashin. For developments in the field of creation of products from ceramic materials ONPP "Technology" is awarded the order "the Labour Red Banner".

"Technology" underwent certification audit on compliance of a quality management system to requirements of new national GOST P ISO standard 9001-2015 and also a number of other inspection checks which are permanently highly appreciating progress of the enterprise in the field of control of production and management processes.

The net profit of ONPP "Technology" was 212.3 million rubles

Production volume of leading enterprise of RT-Himkompozit Holding (enters into Rostec State corporation) ONPP "Technology" of A.G. Romashin in the first half of the year 2016 increased by 15% in comparison with the same period of last year and was 2.7 billion rubles. Increase by the enterprise in total sales of a share of civil products for 3.3% became strategically important indicator according to the results of the first six months 2016 also.

"Revenue of ONPP "Technology" according to the results of the first half of the year 2016 increased by 5% in comparison with the same period of last year. Net profit was 212.3 million rubles that for 130.9 million rubles exceeds planned targets (or for 160%)", - the CEO of RT-Himkompozit Holding Shubsky Kirill noted.

Increase in a share of civil products in the first half of the year 2016 became possible thanks to carrying out the systematic work of the new management of the enterprise aimed at the development of cooperation with leading companies of the civil market. Now the management of ONPP "Technology" reaches agreements on cooperation with United Shipbuilding Corporation and the enterprises of the railway industry.

In April, 2016 the Board of Directors of JSC ONPP Tekhnologiya of A.G. Romashin" RT-Himkompozit holding (enters into structure of Russian Technologies State Corporation) approved a new organization structure of the enterprise.

In two-level structure five managerial links are selected: production, scientific, financial and economic, administrative and legal, security. Changes are directed to increase in management efficiency within accomplishment of strategic tasks.

As the CEO RT-Himkompozit noted, the chairman of the board of directors of the enterprise Kirill Shubsky, this decision was made within the comprehensive program of the optimization implemented by state corporation and directed to increase in efficiency and transparency of management processes. "Reduction of structure in compliance with modern management models became one of results. A lot of work is carried out on streamlining and an exception of duplicative functions. For the purpose of the organization of system scientific activity in the separate direction the link on science and development is selected. All these changes should make management transparent, open and clear and also affect effectiveness and speed of acceptance of management decisions", - the head of holding said.

In ONPP "Technology" of A.G. Romashin appointments of heads of the first level took place. Alexey Budykin is appointed to the position of the First Deputy CEO. In its area of responsibility there are personnel, administrative and legal functional directions. Anatoly Khmelnytsky whose competences will include coordination and development of activity of scientific-industrial complexes is appointed the deputy CEO for productive activity. The position of the Deputy General Manager for Research and to development was occupied by Oleg Komissar. He will be responsible for functions of the innovative and strategic development, to coordinate activity of scientific and technical council and council of young scientists and specialists. Maxim Volkov who, except financial and economic, will supervise questions of capital construction and a business activity is appointed to a post of the Deputy General Manager for Economics and to finance. Mikhail Voroshilin whose circle of competences not only security issues, but also issues of development and information technology implementation will enter is confirmed to the post of the deputy CEO for security.