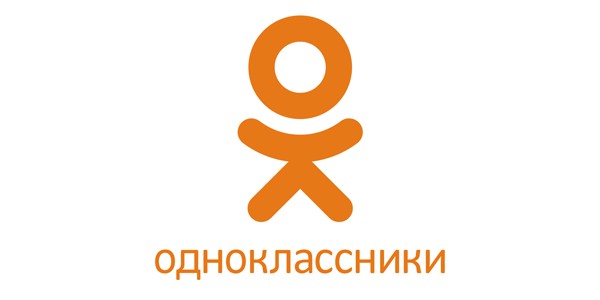 Odnoklassniki uses social network in 229 countries of the world. The only country from which it is not recorded any visit – Pitcairn Island. At the same time users from Vatican, North Korea, Brazil, etc. come into Odnoklassniki: 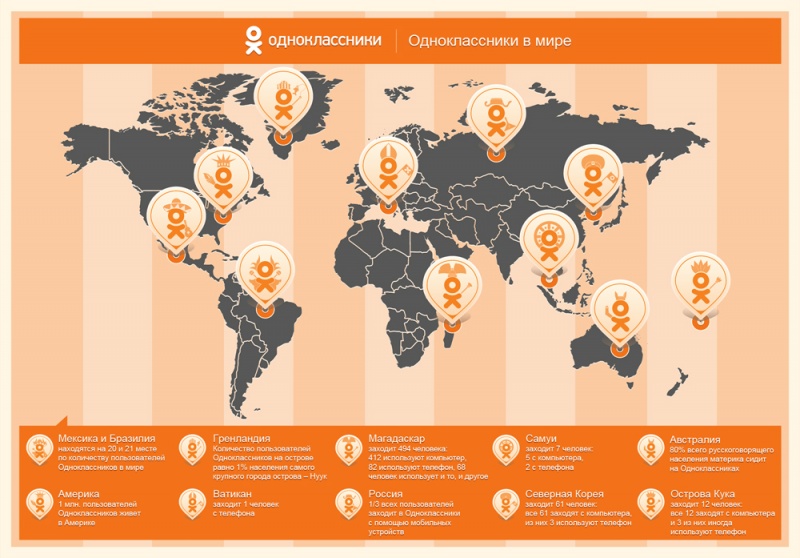 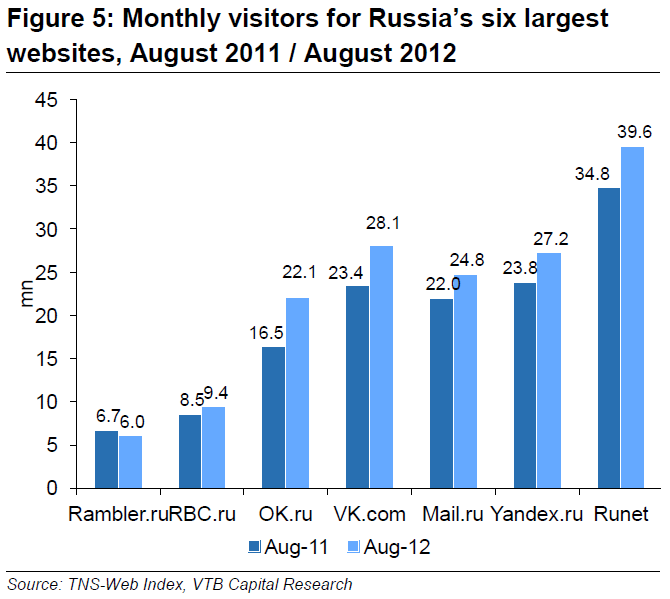 At the end of February, 2012, according to the statistics of LiveInternet, the new record of Odnoklassniki - 32.9 million users a day was set. 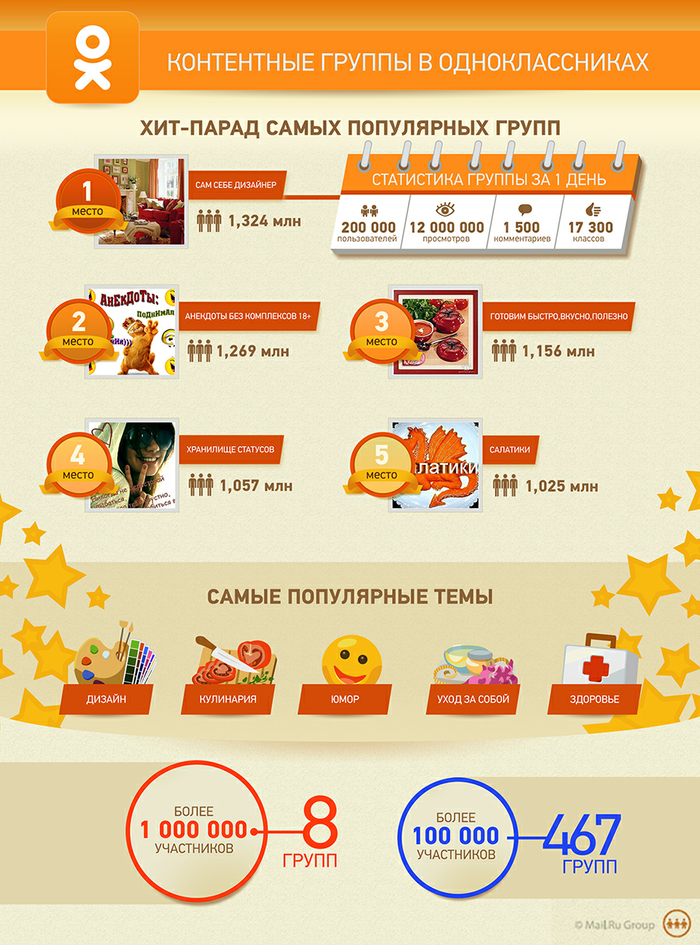 For February, 2013 the greatest share from 39 million users who daily come into Odnoklassniki visits social network from 21 to 23 o'clock. And into the web version of social network come from 19 to 21 o'clock more often, and into mobile - from 21 to 23. Also it is possible to find information on in what hours most often write the statuses in infographics, estimate a photo, comment, etc. 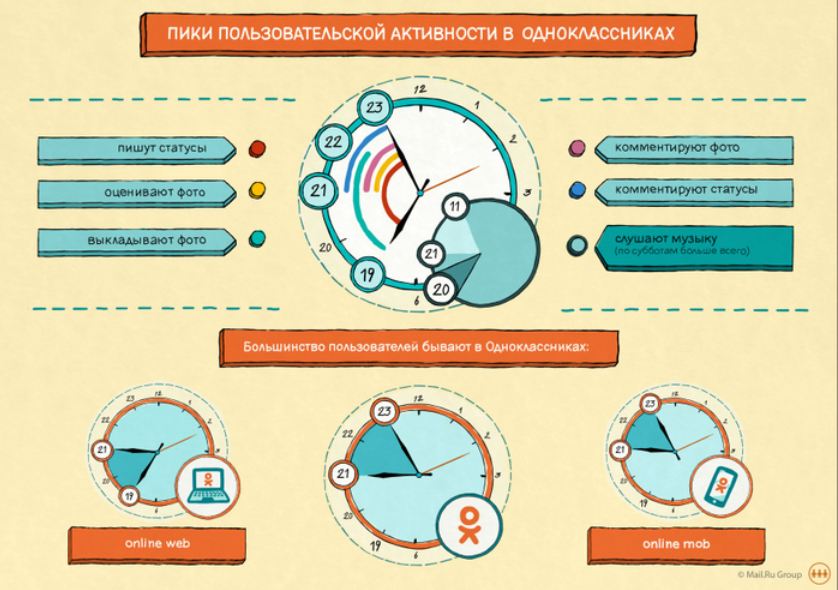 For April, 2014 at users of Odnoklassniki the devices working at the Android platform enjoy the greatest popularity. It is connected, first of all, with big market saturation inexpensive Android devices. iOS became the second most popular platform, from devices with this mobile operating system iPhone 5 is in the lead. And a little more than 1 million people a month uses smartphones and tablet computers with Windows Phone. 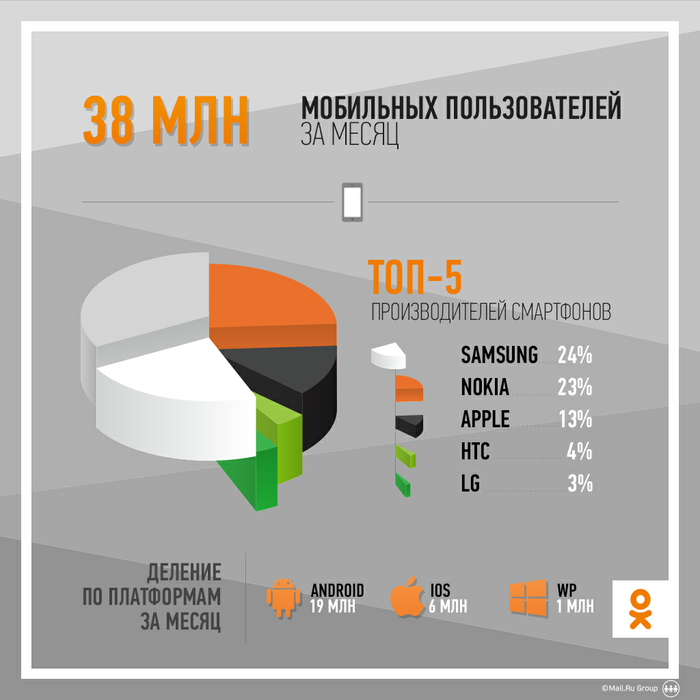 "Games — one of the main sources of profit for Odnoklassniki. We hope that the market of games in social networks will save revenue growth from games at the level of 10 — 15% monthly" — Ilya Shirokov, the head of Social networks business division of Mail.Ru Group comments. Women aged from 20 up to 40 years are especially active. They usually select Farm, men prefers strategy and poker.

Children up to 12 years make small percent of the registered users of social network. But practically all of them start game applications. The adults having the account in Odnoklassniki do it much more rare — only 40% of users are more senior than 20 years are involved in network games. "Odnoklassniki" gained the lead not only on income, but also on number of installations of game applications: their users made about 493 million loadings against 398 million at audience of VKontakte.

"Users of Odnoklassniki are more senior and are ready to pay for games in social networks unlike youth audience of VKontakte — the Appdata.ru project manager Anatoly Objedkov explains. According to it, in Odnoklassniki classical casual games like Farm where players purchase symbolical advantages for money are popular. The audience of VKontakte is focused on more difficult games — RPG and strategy, he notes. "Income from a game in Russia is traditionally halved between publishers and social network, however in June, 2012 the head of VKontakte Pavel Durov said that now creators of games will be given by 55% of revenue — the expert notes. — It brings closer social network to the western distribution model of income — Facebook takes away only 30% of revenue of games as well as mobile app stores of Appstore and Google Play".

By Mail.Ru Group estimates, in 2011 the market of games on social networks made about 7 billion rubles, or 205 million dollars.

In the section of Video content which users can share with friends by means of the Class button is laid out. The rating of videos made on the basis of the user recommendations helps with the choice of interesting video.

The first advertizing campaign in the section 'Odnoklassniki. Video" started on August 29, visitors of Odnoklassniki saw the videos advertizing the tariff option "Holiday Online" of MegaFon mobile operator. Exclusive placement carried out the agency of digital-communications AdWatch Isobar. In an advertizing campaign the pre-beater format – a 10-second roller preceding video which the user sees not more often than once a day is used. For several days of placement of CTR of a pre-beater made 4.7% and we expect good results according to the results of a campaign".

Section "Odnoklassniki. Video" generates the video traffic comparable to RuTube indicators. According to TNS Web Index, in July, 2011 the number of viewings videos in the section was 122.34 million, and number of unique users – 10.692 million. For comparison video uploaded on RuTube in July gained 162.865 million viewings, it was seen by 26.1 million unique users.

Classroom indicators of both platforms provide to advertisers essentially new opportunities of use of video advertizing. Still video formats were one of media mix components when planning advertizing campaigns on the Internet. The pool of platforms which are offered now by RuTube does possible holding advertizing campaigns where video formats will play a key role when forming a media mix. "Odnoklassniki. Video" – for today the only service in Russia allowing to target advertizing in video content on social and demographic profiles. According to TNS Web Index, in July rollers on "Odnoklassniki. Videos" and video portals which are sold by RuTube (in addition to rutube.ru it is kinopoisk.ru, karaoke.ru, dom2.ru and tnt-online.ru) gained more than 299 million viewings, they were seen by over 34.5 million unique users.

On May 26, 2020 it became known that Odnoklassniki expanded possibilities of own service of voice and video calls: now it is possible to connect the interlocutors who are not authorized on social network using the invitation link to a