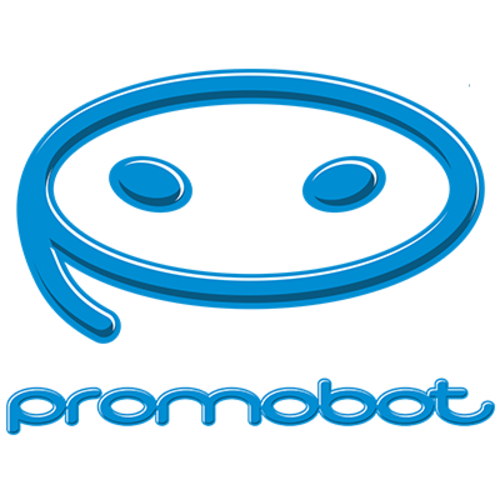 The Promobot company is engaged in development of the robots capable to understand the speech of the person, to answer questions and to keep up the conversation. The robot functions by means of the Cognitive Engine technology developed by a startup command. As of fall of 2016, the command develops already the third model of the robot (Promobot v.3). Production capacities of the enterprise are in Perm: here do the body, assemble robots and perform balancing and commissioning. According to the company, at the current capacities it is possible to make up to 1000 robots annually. 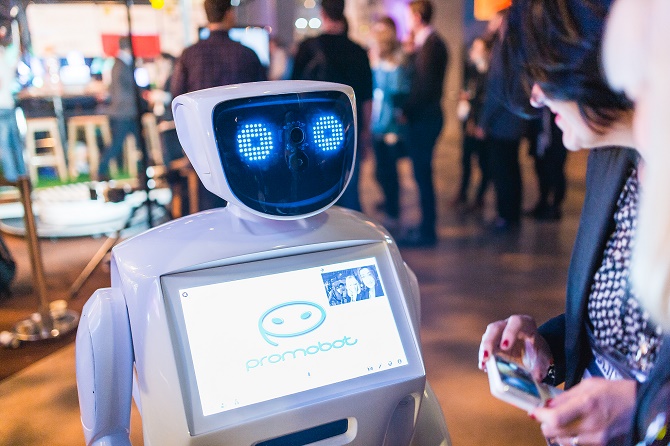 Promobot works in a segment of service robotics which, by estimates of the International federation of robotics, annually grows for 55%. In 2013 it made $5.3 billion, and in 2017 can grow already to $30 billion.

The solution developed by the company allows to create the robots answering to tasks of customers: they can be consultants, guides, concierges, bank workers. The robot consultant is capable to solve a problem of automation and effective customer service which at the moment faces most the largest companies of banking sector and retail in the world. Settings of the specific robot are configured according to needs of the customer. Also there is an ability to integrate the robot with external systems and gadgets, for example, the robot can accept payments or interact with the CRM system. Expansion of a portfolio of robotic products of the company and an exit in new niches are in the future possible.

2020: The claim from Arnold Schwarzenegger for creation of the robot double

At the beginning of March, 2020 it became known that Arnold Schwarzenegger filed a lawsuit against Promobot for creation of the robot double. The Hollywood star wants to receive from the Russian company $10 million, compensation of legal costs and  the profit got from  sale of the robot with  his appearance.

With reference to this document announces the TMZ edition the claim. According to its information when Schwarzenegger was in Russia in 2019, Promobot asked it to be photographed with the robot, but the actor refused. The model with Schwarzenegger's person was provided in 2019 in St. Petersburg. 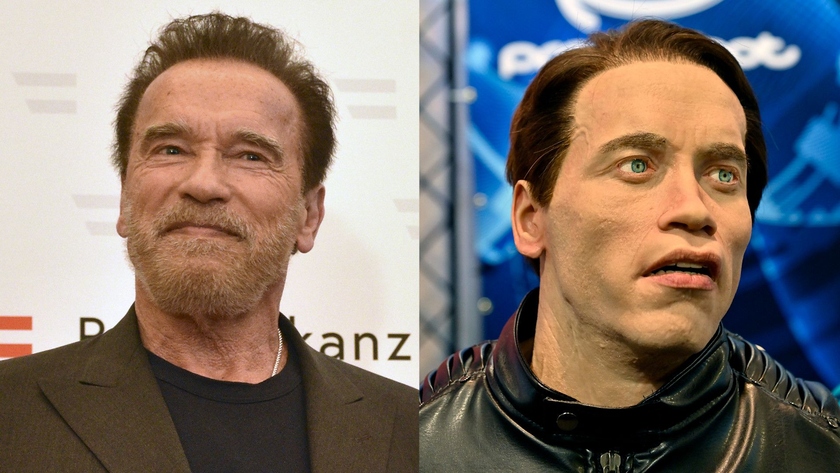 Then the chairman of the board of directors of Promobot company Alexey Yuzhakov noted that the robot "very much was pleasant to the Hollywood actor and his partners: there were sincere emotions – surprise, delight and laughter"

In the publication TMZ it is said that the actor's lawyer Martie Singer in January, 2020 demanded from the Russian producer to cease to use Schwarzenegger's appearance at demonstrations of the robot. Developers promised not to do it any more, but in 2020 Promobot presented the robot with the actor's person at the CES and New York Toy Fair exhibitions in the USA.

The public relations manager of Promobot Darya Vakhteeva in a conversation with RBC said that the company did not receive any claims, and several months conducts negotiations on use of appearance.


Promobot also reported that the company decided not to use Schwarzenegger's appearance to avoid misunderstanding therefore the polymeric model of the robot will be remade. [1]

On September 17, 2019 it became known that Promobot won a grant in the amount of 20 million rubles on carrying out developments in logic of the market of means of human-machine communications of Neyronet of the National technology initiative. It is reported on the website of the governor and the government of Perm Krai.

Promobot became the winner of competitive selection according to the Razvitiye-NTI program of Fund of assistance to innovations along with other Perm company — Innfokus. 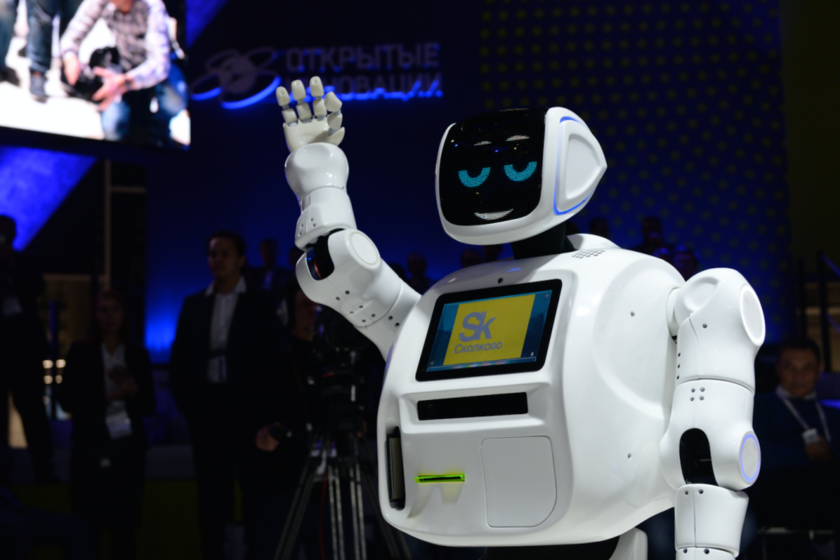 According to him, the developments supported by fund will allow to expand a scope of the robotic systems considerably.

Kivokurtsev noted that existence of open API opens access to independent programming of the robot, use of the open platform for the solution of research tasks in the field of algorithms of deep learning, recognition of an image and a voice in conditions, as close as possible to reality.

As for Innfokus, the companies it was succeeded to attract 15 million rubles. These means will go for creation of the equipment for processing of the figurine parts created using additive technologies. These parts will find application in many industries.

The program of development of the national technology initiative (NTI) of Fund of assistance to innovations works since 2016. It is directed to support of the companies which already have experience of development and sales of own knowledge-intensive products and planning development and mastering of new types of a product. In total on tender 530 requests arrived.[2]

2018: Investments of "VEB of the Innovation"

In July, 2018 agreement signature about intentions between child structure of Vnesheconombank "VEB Innovations" and Promobot company took place. Under the terms of the agreement of "VEB of the Innovation" will invest 450 million rubles in the Russian producer of service robots. Promobot is going to direct the involved investments to upgrade of a product line, development of production and scaling of business.


According to a research of the Tractica agency, in 2017 the market of service robots in the world made more than $50 million and can grow by 2022 to $100 million, and the number of the service robots sold during this period (2018-2022) will be about 20 thousand pieces. In mid-term plans of Promobot company – to enter into the three of the largest producers of service robots in the world. In the long term of Promobot considers an exit to the IPO on one of large world platforms or sale to the strategic investor.

The Internet Initiatives Development Fund (IIDF) purchased 15.5% in Promobot company. The fund announced the transaction worth 150 million rubles in October, 2016, without opening then the bought packet.

Financing will go for scaling of business and Research and Development.


As explained TAdviser in IIDF, investments are separated into several tranches. The first tranche already came to the end. "We will monitor development of the company and its achievement of target indicators, the subsequent investments depend on it", - explained in fund. 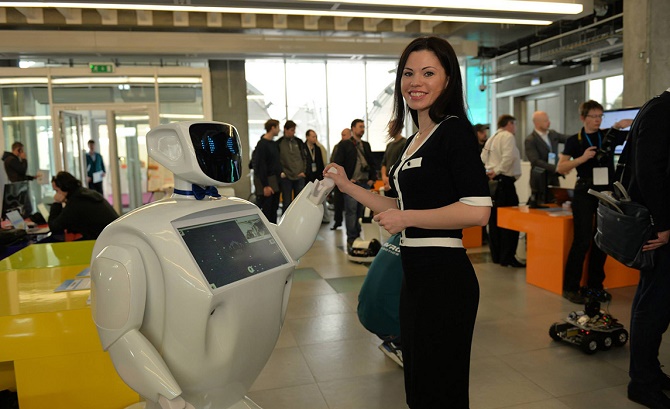 The IIDF invested in the growing market of service robots, having purchased 15.5% of Promobot company

This not first enterprise in the field of artificial intelligence in which invests IIDF. In 2016 fund invested 15 million rubles in Stafory company which develops a technology complex on search of linear personnel and robotic holding interviews. The robot automatically rings round potential candidates, holds with them audio-and video interviews, and transfers results to the customer.[3]

According to Promobot company for October, 2016, it sold about 100 robots, each of which costs an average from $10 thousand to $18 thousand depending on a complete set. According to Contour-Focus base, for 2016 the Promobot company concluded contracts with goszakachik for the amount 1.9 million rubles.

At the end of 2016 the company signed delivery contracts of robots with several new customers. One of them – "The museum of modern history of Russia" (the amount of two contracts – 1.45 million rubles). According to the company, since March, 2017 visitors of the museum will be able to listen to a lecture from the guide of Promobot v.3.

Besides, contracts with two foreign companies – the Spanish Ger Shuler Global S.L. and the Chilean SMART SOLUTION Ingeneria Spa which buy on 5 robots everyone were signed. Chile will use robots, first of all, as concierges in buildings and consultants in shops.

As of December, 2016, Promobot conducts negotiations on delivery of robots with the Finnish airline Finair.

In May, 2015 in the northeast of Moscow the technopark of MIPT (Moscow Institute of Physics and Technology) officially opened. At its opening the prime minister of the Russian Federation Dmitry Medvedev communicated to the Perm robot promoter. "How are you doing?" – Dmitry Medvedev asked. "Dmitry Anatolyevich, and why you ask it?" – the robot hit question with a question, having caused burst of laughter of all being present.[4] 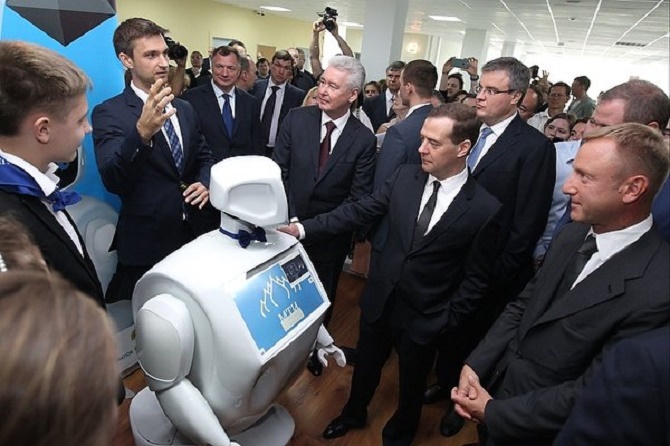 "How are you doing?" – Dmitry Medvedev asked the robot.

According to developers, they loaded previously the photo of the prime minister into memory of the robot, as a result he could distinguish Medvedev on an action. The prime minister examined the robot of minute two.

In March, 2015 the Promobot project (robot promoter) got approval of the request for the status of the resident of Skolkovo Foundation. As a result the Promobot company joined participants of a cluster of information technologies.

The development team began to create the promobot in "The small innovation enterprise "Intellekt" (Perm). The main founders of this Ltd company are the entrepreneur Alexey Yuzhakov and the Perm Polytechnic University (PNIPU). One of the companies of Intellekt group of companies projects and creates so-called smart homes (Intellektstroy), another – grows up roses and vegetables (Intellektagro), at the same time the microclimate in a rosary is controlled on the Internet online.