The JSC RTI enterprises have own Research and Development infrastructure and implement projects, unique on complexity and scale, in the field of radio - and space technologies, navigation and microelectronic products. The product portfolio of JSC RTI is provided by ready-made solutions in the field of end-to-end systems of communication and security, system integration, microelectronics, telecommunications, geoinformatics and radio navigation and also large defense projects of the state importance. JSC RTI participant of a ranking of the largest defense companies of the world of TOP Defense 100.

For 2017 business of RTI concern is provided in three industries: 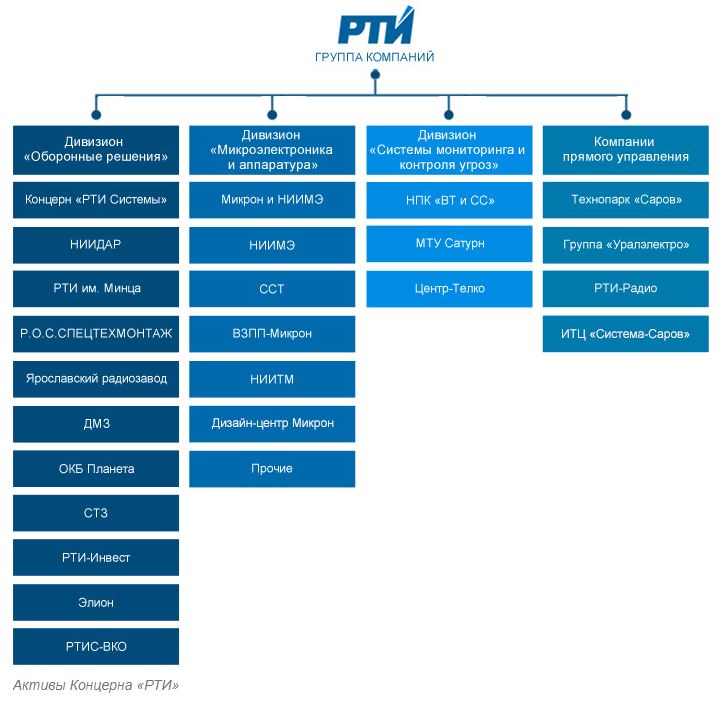 In a defense segment the main activity of holding is a creation of information means for systems ensuring strategic safety of the country. Are engaged in it:

Products of a defense segment are:

At the market of microelectronics of JSC RTI it is presented by Mikron group which was a part of holding as a result of integration of assets of Sitronics. For 2017 Mikron — the largest in Russia and the CIS the producer and the exporter of microelectronics.

Monitoring system and control of threats

JSC RTI also develops and implements complexes of the integrated information management systems and security for public authorities and also performs their service maintenance. In particular, it is the systems of situation management for operators of strategically important objects, law enforcement agencies and departments and also critical infrastructure in the markets of B2G and B2B. Here RTI is represented by such companies as:

Main products and solutions in the field of security systems and integration:

In 2013 revenue of RTI remained at the level of 2012 as revenue growth in the Defense Solutions segment for 23% year-on-year was considerably leveled by reduction of income in the "Information and Communication Technologies" segment.

In 2013 JSC RTI improved the positions in a prestigious international ranking of the largest defense companies of the world of Defense News Top 100 having risen from the 87th to the 80th place.

2019: Appointment of Pavel Laptayev as the CEO

On September 25, 2019 the Board of Directors of JSC RTI granted a request of the CEO Maxim Kuzyuk for abdication. Pavel Laptayev who was earlier holding the board member's position - the deputy CEO for finance, investments and economy of JSC RTI is appointed the CEO of JSC RTI. Read more here.

2018: RTI will export technologies of "the safe city"

On July 18, 2018 it became known that Department of the international business of RTI and representatives of business delegation of the Republic of South Africa defined the main directions of development within the Safe City joint project which implementation assumes use of solutions of system integration and the technologies developed by RTI. Earlier invested about 450 million rubles in creation of similar technologies of RTI.

Within negotiations of the party discussed issues of creation in the Republic of South Africa of the municipal Centers of monitoring and management of a city situation, upgrades of the corresponding infrastructure and also a form of public-private partnership which can be used for project implementation.


By the invitation of RTI the foreign delegation also examined system operation video surveillances and the Uniform center storages and data processings Moscow and visited National Center for Crisis Management MINISTRY OF EMERGENCY SITUATIONS Russia. The southern African specialists noted high efficiency of the solutions and systems developed and implemented in Russia.

The Sovcombank sold 10% of shares in RTI

In December, 2017 it became known that the Sovcombank lowered an equity interest of the largest Russian holding in the field of defense and microelectronic solutions - JSC RTI - from 10% to 0%. It is said in materials of bank. Date of the termination of the basis to dispose of shares specifies on December 25.

Multi-billion claim of the Ministry of Defence

The Ministry of Defence expects to collect from the defense concern RTI of 4.97 billion rubles belonging to AFK "Sistema". Information on the appeal of the ministry to Arbitration court of Moscow appeared on the website of "Electronic justice" on May 4, 2017. The essence of claims in a public access is not provided[1] yet[2].

The source of RBC in the Ministry of Defence assumed that the claim is connected with failure of state defense order. Primary activity of RTI scientific-industrial complex on its website declares creation of land information means for the strategic systems of aerospace defense of Russia which mission consists in ensuring national security. RTI acts as the head contractor on creation and upgrade of land information means of missile warning systems, missile defense and control of space.

AFK "Sistema" and VTB agreed about long-term financing of RTI group ("Radio engineering and information systems). The bank will become the key creditor of the project with the total amount of requirements up to 28.5 billion rubles, in 2016-2017 refinances all debt obligations of RTI, except for the obligations for state defense order covered with the state guarantees, says concern.

Credit agreements provide deferred settlement of a considerable part of a debt of RTI group – about 60% of the total amount of debt – till 2021 with the subsequent annual payments until the end of 2026 and also a grace period of repayment of percent. The rest of a debt will be refinanced by 5-year revolving credit lines that should provide to RTI additional flexibility in working capital management.

Within the reached agreements of AFK "Sistema" will also redeem from VTB 15.32% of ordinary shares of JSC RTI for 4.5 billion rubles with final settlement in January, 2019. As a result of the transaction the share of System in the company will make 87%. The Federal Antimonopoly Service of the Russian Federation already approved the transaction in November, 2016.

At the end of 2013 JSC RTI the order of the Government of the Russian Federation was appointed by the only contractor of the large-scale system project on creation of the National integrated center of monitoring of biological threats (Research Center MBU). This project is aimed at providing knowledge of the state, business and the population about the current biological situation using modern technologies.

On August 23, 2012 the RTI completed consolidation of Sitronics, having compulsorily redeemed 0.52% of shares from minority shareholders. In the same day delisting of Sitronics from the London Stock Exchange came to the end.

In January, 2012 JSC AFK Sistema, JSC RTI and Management Company Groups NVision LLC signed the framework agreement regulating the principles of future relationship of the parties and determining terms of transaction by strategic integration of assets of JSC RTI and Nvision Group Ltd.

"Today NVision Group is one of the largest ICT companies in Russia. We expect that integration of the hi-tech assets of AFK "Sistema" consolidated based on JSC RTI with assets of NVision Group as leading industry partner will lead to growth of shareholder value of the company and will create obvious advantages in terms of expansion of scales of business and achievement of industry synergy", - the President of AFK "Sistema" Shamolin Mikhail told.

"The expected transaction corresponds to our strategy for formation of the largest hi-tech company in the market of the CIS with the diversified portfolio of clients and technologies, capable to execute "turnkey" and to service complex projects of any complexity for the largest state and private customers. Integration will fully allow to use complementary market and technology competences of the parties", - the President of NVision Group Sushkevich Anton emphasized.

"Integration of the assets and competences of NVision Group and RTI having obvious synergy potential will allow to strengthen a position of RTI as one of the leading suppliers of complete technological solutions with a high share of own knowledge-intensive product. ICT examination of NVision Group can be successfully used in strategic directions of activity of RTI, including the systems of complex security and communication, microelectronic and telecommunication solutions", - the CEO of JSC RTI Boev Sergey noted.

Completion of the transaction is caused by accomplishment of a number of precedent conditions, including, its approval according to corporate procedures of the parties of the transaction, obtaining all necessary permissions of the state regulating authorities and also signing of a row separate, connected with the transaction, agreements.

Revenue of RTI for complete 2011 increased by 28.3% as a result of successful implementation of the first stage of the project on creation of the Intelligent transport system of Moscow (BE "End-to-end systems of security), additional projects of BE "System integration" and also in connection with growth of amounts of works within the state defense order (BE "Defense Solutions").

The indicator of OIBDA of RTI decreased for complete 2011 in comparison the same period of last year in connection with active market expansion of BE "System integration", increase in current expenses of BE "Microelectronic Solutions" due to planned growth of expenses on the project of 90 nanometers; and also in connection with sale of a share of RTI in Watt Drive company.

Sale to Brazilians of 74.9% in the Austrian WattDrive and purchase of 100% in RTI Estate

In December, 2011. The RTI of a System concern closed the deal on sale to the Brazilian corporation WEG of 74.9% of a share in the Austrian WattDrive group.

In December, 2011 RTI was purchased by 100% of authorized capital of JSC RTI Estate.

Purchase of 63% in Sitronics company

On March 5, 2011 the Board of Directors of System made the decision on sale of 63.97% of Sitronics of RTI company. Thus, "hi tech concern in which there is money of the external partner (Bank of Moscow) and which, perhaps, also other potential partners will join is created". "System" sells the packet, and "will separately deal with the stocks of Sitronics which are traded on the market when the moment approaches".

In October, 2011 JSC Sitronics, MTS and JSC "LUKOIL" companies started the Fast Gas Station project. Subscribers of MTS, purchasing the SIM card with support of NFC technology and the special NFC antenna, will be able to make instant payment for fuel on refueling stations of JSC "LUKOIL".

For this transaction the share of System in concern was estimated approximately at 14 billion rubles, the assessment was carried out by Ernst & Young. Other stocks of RTI of a System concern are owned by natural persons, they were not entered to the new company.

AFK and Bank of Moscow intend to provide implementation of the investment program of RTI of a System concern, including in the field of large-scale state projects, such as geoinformatics and "GLONASS", the vice president of System and the chairman of the board of directors of concern Sergey Boev says. The strategy of RTI of a System concern is aimed at creation of the leader of the Russian industry in the field of the innovative radio technologies, including in defense sector, and Bank of Moscow works with many enterprises of defense industry within 12 years, the bank representative adds. According to him, financial opportunities of bank will allow to diversify activity of RTI and to commercialize its practices.

Revenue of "RTI of systems" for the first nine months 2010 made $336 million, OIBDA — $56 million, and a debt — $82 million. Thus, the concern was estimated for the transaction at 5.5-8 indicators of OIBDA (depending on indicators of the last quarter 2010), the analyst of Uralsib Konstantin Belov notes. Strategically it can be considered as continuation of restructuring of an asset portfolio and search of partners for participation in minor businesses, it continues. He reminds that in November, 2010. "System" agreed about creation of similar partnership with the British holding Thomas Cook in the field of tourist industry (AFK entered a controlling stake of Intourist, and the British — $45 million), and in December the blocking stake of Toy Store at AFK purchased Sberbank for 3.4 billion rubles.

Despite creation of the new company, System continues to consider expediency of the consolidation "RTI of Systems" and "Sitronics" (AFK is also controlled), the representative of AFK says. The decision will be made in February, 2011.

2010: Entry into 100 largest defense companies of the world

In August, 2011 JSC RTI Sistemy Concern at the end of 2010 was included into the list of 100 largest defense companies of the world again.