RTK Information Technologies of RTK IT

In March, 2018 "Center of Technologies of Interaction of Networks" (CTIN) together with Inlayn Tekhnolodzhis Group (ITG) and Lokasoft Integration founded RTK Information Technologies company ("RTK IT").

Authorized capital of the joint company was 120 million rubles. 50.1% entered CNIT, other 49.9% in equal shares two other founders.

Sergey Kryukov who is also heading the Inline Technologies system integrator entering into ITG is appointed the CEO of RTK IT.

The CNIT belongs to provider of data centers SafeData who is owned, in turn, by Rostelecom. 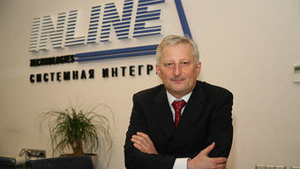 Sergey Kryukov became the CEO of RTK IT

Inline Technologies earlier repeatedly was equipment supplier and services for Rostelecom, and in 2018 the companies jointly build the protected network and create infrastructure of jobs of the State Office of Public Prosecutor.

Lokasoft Integration - the company, also not foreign for Rostelecom. Earlier it was called Sovzond Integration, it possesses 15% of Lokasoft company (earlier Sovzond center) and 49% of RusGIS company (the others 51% at "subsidiary" of Rostelecom).

RusGIS and Sovzond center - contractors of Rostelecom on development of the information system "Common Information Space of Geodata" which the operator sells in regional authorities.

Again founded RTK IT company, according to the interlocutor of TAdviser familiar with its plans, will be engaged in sales of IT services to state agencies. Inline Technologies has the competences required for this purpose, and Rostelecom - an administrative resource and infrastructure, he adds.

Key activity of RTK IT - rendering complex IT services to the state customers, Vidiya Zheleznov, the director of strategy and marketing communications "Rostelecom - DPC" confirmed to TAdviser.

The joint venture, according to him, will concentrate on the following directions: