SAP CIS is the Russian division of the German company SAP SE.

In addition to Russia, SAP CIS as of 2016 supervises 10 more countries: Kazakhstan, Azerbaijan, Belarus, Ukraine, Uzbekistan, Turkmenistan, Kyrgyzstan, Georgia, Armenia and Tajikistan. Kazakhstan and Ukraine at the same time have separate legal entities which appear in the global reporting of SAP.

Chronology of events in SAP CIS from the moment of start of business in Russia up to now.

Main article: Heads of SAP in Russia and the CIS

Financial results of activity in the CIS countries where SAP has no offices, do not join in the reporting of the Russian office.

Revenue of SAP CIS in 2019 made 482.5 million euros, follows from the annual report of the company published in March of the 2020th. Growth of turnover was about 2%, but after two profitable years the company finished year at a loss in the amount of 21.17 million euros after a deduction of taxes. Read more here.

In rubles revenue of SAP CIS LLC - the Russian office SAP – in 2019 made about 35.6 billion rubles, follows from the reporting of the company published in June in base " circuit.focus ". It remained practically at the same level, as in 2018, having increased approximately by 1%. At the same time the legal person finished year with net loss in the amount of 1.48 billion rubles while in 2018 SAP CIS got profit about 540.7 million rubles. Read more here.

Share in the market of ERP systems of Russia

In 2016 among the leading suppliers of information management systems the enterprise (ERP, etc.) SAP wins first place from shares of 49% in the Russian market. On the second place there is 1C there is SAP from shares in 32.9%. Microsoft has 8.8%, Oracle has 4%, Galaktika has 2.2%. 3.2% are the share of other players.

Shares of suppliers in the Russian ERP/ISUP market on sales volumes in US dollars in 2003-2016, % 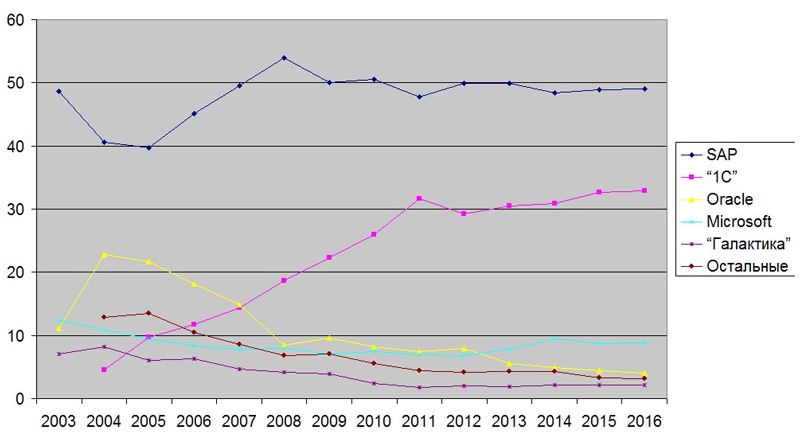 Also enter an area of responsibility of the Moscow office SAP CIS:

DPC on the platform of Rostelecom

Key activities of consulting division of SAP CIS are:

For more than fifteen years of work in the CIS the SAP company created the full-scale consulting organization allowing to perform projects taking into account specifics of the CIS countries. For these years the team of 170 highly qualified specialists is created, tens of large projects of implementing solutions of SAP adapted to requirements of the legislation and the business practice operating in Russia and the CIS countries including for such customers as "Lukoil, Surgutneftegas, Severstal Resource, OMK, Power Machines, Federal Grid Company, Pipe Metallurgic Company and many others are successfully implemented.

The seminars authorized by SAP go in 50 countries of the world (including in Russia, Ukraine and Kazakhstan), 77 training centers in 18 languages. More than 300 educational seminars of different degree of complexity are developed for support of the software products and solutions by SAP company, at the same time, new appear every year. From this pool of seminars comprehensive programs of training in preparation and advanced training of personnel are created. For 2010 in the CIS countries at seminars of SAP representatives of 400 clients and partners were trained, the total number of participants of rates exceeded 7000 people.

In May, 2012 SAP CIS started the new direction in Russia and the CIS on development of custom business applications (SAP Custom Development). The activity of new division will be concentrated around creation of unique solutions for clients of SAP. By 2015, within the strategy of the company on expansion of the business in Russia and the CIS, SAP is going to increase a share of custom developments in revenue breakdown from sale of software to 7%. SAP performs custom developments also in other countries of the world.

Main article: The center of digital leadership of SAP in Moscow