German company, software maker, largest in Europe. The headquarters  — in Valdorf (Germany). The company takes the fourth place in the list of the largest software developers in the world. For many years SAP remains the leader of the Russian market of ERP systems.
Competitors: Oracle

SAP company was created in 1972 by five former employees of IBM (Klaus Tschira, Dietmar Hopp and Hasso Plattner, Claus Wellenreuther, Hans-Werner Hector) from the German office of the company in the city of Veyngeym. The name of SAP was made on the basis of the first letters of the complete name: "Systeme, Anwendungen und Produkte in der Datenverarbeitung" / "Systems, Applications and Products in Data Processing". The first office of firm was in Manngeym (Germany).

Chronology of events from the history SAP SE of date of creation up to now here.

By January, 2020 business of SAP is divided within three main divisions:

As of the end of 2016 SAP has about 345 thousand clients in 180 countries of the world. The number of partners of the company in the world is 12.1 thousand, and the audience of the users working with SAP products on a cloud subscription exceeds 110 million.

In 2019 SAP received 27.55 billion euros revenue that for 12% exceeds an indicator of year prescription. Rise happened in many respects thanks to cloud business which amount increased by 39%, to 6.93 billion euros.

Sales of licenses for the local (not cloud) software in 2019 decreased by 2% concerning the 2018th, having made 4.53 billion euros. The German company earned 11.55 billion euros from services of support of such software that is 5% more, than the previous year. 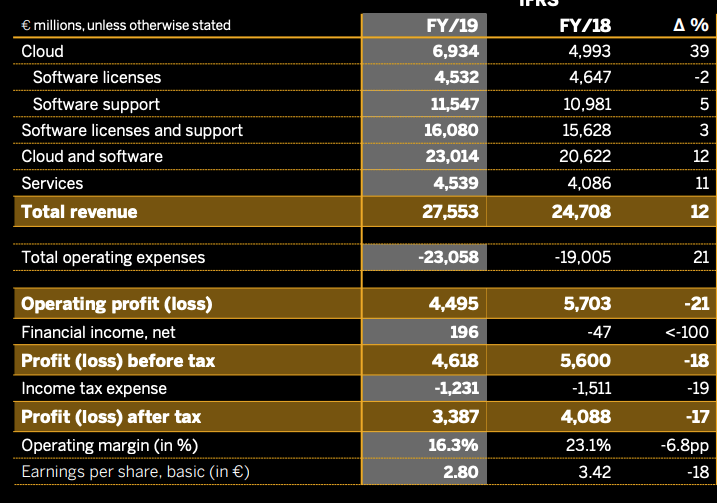 In 2019 in the direction of Applications, Technology & Services are registered sales at the level of 23.54 billion euros, having increased by 8% in comparison with result of the 2018th.

Sales in structure of Intelligent Spend Group increased by 21%, up to 3.18 euros euros, and in Qualtrics subsidiary company of revenue made 508 million euros.

The largest market for SAP is EMEA: here revenue in 2019 exceeded 12.1 billion euros, having exceeded value of year prescription for 9%. In the USA revenues of the company increased by 15%, to 9.08 billion euros. The same growth was all countries of North and South America combined.

In the Pacific Rim turnover of SAP in 2019 made 4.25 billion euros that is 9% more, than the previous year.

The number of clients of S/4 HANA by the end of reporting year increased by 24% of rather same period of the 2018th and exceeded 13,800. About 40% of new customers in did not use SAP products earlier.[1]

Business of SAP in Russia and the CIS

The company works in Russia since 1992.

Also enter an area of responsibility of the Moscow office SAP CIS:

The SAP company repeatedly participated in the corruption schemes connected with delivery of its products to clients. Read more here.

Work and personnel management in SAP

Key competitors of SAP in the world market are the following companies:

Most sharply SAP competes with Oracle. A striking example is the current lawsuit between the companies in which Oracle accuses SAP of the espionage which was allegedly performed by the staff of TomorrowNow (SAP affiliated enterprise).

10 methods of a victory over SAP at a negotiating table