Sirius  is the concern created by the order of Rostekhnologii state corporation of June 24, 2009. It included 25 research institutes (RI) and the enterprises specializing in equipment manufacturing of TV and radio broadcasting, radio-electronic devices of different function, ADP equipment and software.
Owners:
Rostekhnologii

The purpose of concern  — to become leading enterprise in the field of creation of specialized ACS and the IC, first of all, of defense appointment. In concern five main ways for its achievement are planned: stage modernization of the enterprises, first of all, within accomplishment of current contracts, concentration of efforts at consolidation of potential production of the enterprises of holding in integrated cycles of production of end products, more effective marketing policy, use of defense technologies for creation of competitive civil products and full-time work with potential customers on studying of their requirements.

According to the head of concern, 80 % of its developments  is a defense order (the ACS elements, acoustic instruments, the systems of radio navigation and the protected data transmission), but in 2-3 years its share should fall up to 50 %. The head of Sirius defines perspectives for civil products in segments of digital TV, devices and the equipment for telemedicine, automation systems of municipal economy (accounting and optimization of electro-and water consumption, the "safe city" program) and software developments with the open code. Main customers are the Ministry of Defence, other security agencies and Minpromtorg. It is planned that the circle of customers will extend without fail in process of promotion of products of concern on the market.

Merge to "The Russian electronics"

In February, 2013 it became known that the Rostekhnologii state corporation carries out consolidation of three ICT concerns - Orion, Sirius and Russian Electronics - to uniform holding under control of the last.

The decision on consolidation of three concerns was made in 2012: the supervisory board of Rostekhnologii state corporation where transfer to "The Russian electronics" of assets of Sirius and Orion was approved, took place on December 19, 2012.

"Incorporating will allow us to implement a single system of production management. Now depending on pattern of ownership activity of participants of holding is regulated or the legislation on federal state unitary enterprises, or on the joint-stock company  — Leonid Ukhlinov comments on CNews.  — Privatization will give the chance to pass completely to the principles of corporate management. Further our holding should build a fabrication cycle so that functions of its participants were not duplicated, and were complemented, generating at the same time synergy effects".

All organizations entering into Sirius should become joint stock company until the end of  2009, schedules of incorporating are approved and approved with Rosimushchestvo. At the same time Ukhlinov recognizes, incorporating will not solve all problems as a part of the enterprises is in a difficult situation.

"There are enterprises occupying the huge spaces which are not loaded  — he explains.  — It is necessary to carry out complete audit and to concentrate production capacities of the enterprises. Secondly, why to buy the same equipment for two enterprises when it is possible to use already purchased and not used? Why to create separate test stands at each enterprise? Tests of the same equipment, an inspection of its quality can be carried out for the different enterprises on one platform. Now the action program of holding for the next three years in which these and many other directions of optimization found reflection is developed".

With participation of "Research institute of software tools" in St. Petersburg and "The Novosibirsk institute of program systems", according to Ukhlinov's plans, the specialized enterprise under the authority of which there will be a providing Information Security and service of internal IT infrastructure can be created: "These scientific research institutes can be considered as the outsourcing platform for service of other enterprises at first of our holding, and then, perhaps, and state corporations in general".

For increase in competence of the enterprises of concern in IT, according to Ukhlinov, 9 agreements on cooperation are signed with the leading Russian system integrators in this area already today. Among the enterprises of Sirius he considers the most successful scientific research institute of television, head enterprise of concern.

The CEO of the company since 2013 - Andrey Zverev.

Till 2013 - Leonid Ukhlinov  is the CEO of concern. In  May, 2009 Ukhlinov left a post of the deputy CEO of MGTS where he directed technical directorate and was responsible for work of the automated and information systems.

In May, 2010 the head Sirius Leonid Ukhlinov declared plans for creation of the national operating system.

In the summer of 2010 Sirius purchased the blocking packet in Alt Linux company and received the option for bringing the share to control.

On September 13, 2010 implementation of the open source was discussed at a meeting of the President of Russia Dmitry Medvedev and the head of Russian Technologies Sergey Chemezov. "I still when in the government worked, began to deal with issues of the open source, - Medvedev reminded. - Then we prepared some programs and transferred to schools, the universities. Generally, this case went especially as if to estimate, then our educational structures spend big money, these are, probably, hundreds of millions dollars year on year on acquisition of software products at the main grandees of production. It is not always correct especially as Open Source so-called on the quality is not worse, and often, what is called the interface, i.e. a cover, is even more convenient for communication to work". 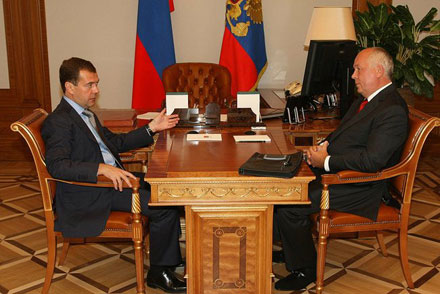 Chemezov reported that in Russian Technologies the Sirius IT holding was created. "It included the new enterprise which is a creator just of the open source – Alt Linux. And based on this enterprise we create our national software platform now", - he said.


As an example, according to Chemezov, the national software platform is implemented in three areas – Samara, Novgorod and Tula (at the time of the meeting in the specified regions still nothing was implemented). "Too based on Alt Linux, - Dmitry Medvedev added. - It is important for various reasons because it is after all security issues. Because often owners of the rights to the corresponding products of the large program companies, they do not transfer codes. At emergence of any problems or we cannot customize a system. And if to speak about more complex systems, including the defense systems, it is simply unsafe".

The Ministry of Telecom and Mass Communications said that welcome an initiative of Russian Technologies to become Competence Center according to the free software in regions of Russia. Within a pilot project, according to the representative of the ministry, creation and ensuring pilot implementation of standard solutions for regional and municipal authorities and also budgetary institutions is planned: "According to the approved card of the Electronic Region project, these solutions cover all industries of social and economic development of the region: property and land complex, transport complex, health care, education, housing and communal services, social security, culture, security and law and order, development of economy and industries".

Regional informatizations is in the field of competence of the leaders of the subjects of the Russian Federation, add in the Ministry of Telecom and Mass Communications therefore the budget of a pilot project should be defined proceeding from the current level of informatization of regions and also specifics and technical features of the information systems which are already functioning in these regions.

"The national software platform is a wide concept, it cannot be represented as only a distribution kit for desktops and server divisions, - Alexey Novodvorsky, the deputy CEO of Alt Linux explains. – It and solutions for client devices, since smartphones, and a system for the data-centers and supercomputers".