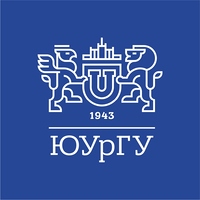 For March, 2011 the university is included into the top ten among 96 universities of Russia in the rating of the Ministry of Education and Science of the Russian Federation and enters into alpha league of the Russian universities. It is the highest part of rating among all universities of the country. SUSU is the center of educational, scientific, cultural and sports life of Chelyabinsk and the region.

On April 26, 1949 there was a Resolution of Council of Ministers of the USSR No. 1671 on the organization in 1951 of the Chelyabinsk Polytechnical Institute (CPI) based on ChMMI by its consolidation with the Chelyabinsk institute of mechanization and electrification of agriculture (ChIMESH). However in 1950 there was an order that ChIMESH saves the status of independent university, and the Chelyabinsk mechanical engineering institute was reorganized into Chelyabinsk Polytechnical Institute. New are added to two already existing faculties: power, metallurgical, construction, mechanical and instrument-making. In 1958 the evening department was reorganized into independent evening faculty.

As a part of the university of 37 faculties, including faculties of military training, prehigh school preparation, two special faculties on retraining and advanced training of specialists with the higher education, institute of additional education and institute of open and remote education. The university has 14 branches in the cities of Russia. 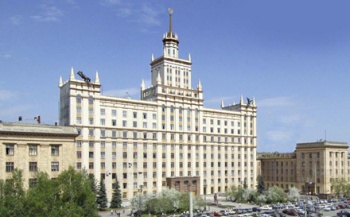 In March, 2011 it became known that the Chelyabinsk South Ural State University (SUSU) and the supplier of supercomputers of RSK the SCYTHIAN created HPC Impulses joint venture (from engl. HPC Impulse) on production of components for high-performance computing systems. The university possesses 34% of authorized capital of the joint venture, and RSK the SCYTHIAN – 66%[1]. Valentin Dorokhov, the graduate of a magistracy of department of system programming of SUSU is appointed the director of the joint venture.

Federal law 217-FZ permits universities to create the small innovation enterprises, explain at the university. In addition to HPC Impulses with participation of SUSU twenty more enterprises are created today. As the director of the innovation department of SUSU Lyudmila Podzhivotova told CNews, most of them are founded with different individuals, and a share of the university in authorized capital of these enterprises same, as well as in a case with RSK the SCYTHIAN. Projects in which these enterprises are engaged lie in different areas – from IT and the medical equipment before production of semi-finished products.

The chief executive of RSK SCYTHIAN Alexey Shmelyov told CNews that at the initial stage of work of their joint venture it is going to arrange production of radiators of water cooling for the supercomputer platform SKIF-Aurora. It was developed by alliance which includes the Italian SCYTHIAN, INFORMATION RETRIEVAL SYSTEM company Eurotech, RSK RAS, with assistance of Intel company. In Europe Eurotech offers this platform under the name of Aurora. As reported Eurotech in 2009, Aurora, "SKIF of row 4" and SKIF-Aurora are different brands of the same product in the different countries.

Production of radiators in Russia, by estimation of RSK the SCYTHIAN, should cost by 2-3 times cheaper, than purchase of similar components abroad. According to Shmelyov, production of radiators for SKIF-Aurora will be performed in own technopark of SUSU in Chelyabinsk. At the same time a developer of radiators is RSK the SCYTHIAN, Shmelyov says. The company will buy these radiators from the joint venture as for itself, and Eurotech is going to deliver them. "It is not pleasant to our foreign partners how radiators in Europe are made, and they expressed readiness to buy this to a component from us", - Shmelyov says.

In the further joint venture is also going to start production and unsoldering of printed circuit boards for supercomputers. However, according to Shmelyov, it is very remote perspective. In addition to production "iron", "HPC Impulses" will offer commercial services in modeling of difficult technology processes on the supercomputer.

Today in SUSU three high-performance systems, the most powerful of which is "the SKIF-Aurora of SUSU" with a performance of 24 of Tflops, are installed. Upgrade after which the power of this system will be 104 Tflops is now carried out it.

Registered at the end of 2008, RSK the SCYTHIAN by this moment performed only four deliveries of the platform, two of which – in SUSU. The dean of faculty of calculus mathematics and information science professor Leonid Sokolinsky answered a question of CNews of why for production of components and rendering services in supercomputer simulation of SUSU did not form the joint venture with more experienced company "T-Platforms", that the university did not want "go in cycles in one monopolist".

Use of the supercomputer

The dean of faculty of calculus mathematics and information science of SUSU, professor Leonid Sokolinsky told CNews that task allocation in the priority directions of science on their supercomputer resources looks as follows:

If to take task allocation on the industries, then natural-science tasks make 65% of the general flow, engineering – 33%, social and economic – 2%.

The university uses supercomputers and for own needs, and for payment under projects of third-party customers. By request of Oboronprom state corporation, for example, on the university supercomputer new constructions of bullet-proof vests were fulfilled that allowed to reduce number of natural experiments considerably.

One more problem which Oboronprom solved on the supercomputer of SUSU consisted in modeling of mechanics of damages which arise in a body of the person at local blows. Earlier for similar experiments it was used or technical plasticine using which it is quite difficult to estimate degree of a travmirovannost of a real human body, or thorax models which cost rather much.

Use of the supercomputer gave the chance to Oboronprom considerably to reduce costs for completion of constructions, speak in SUSU. One kilogram of ballistic fabric from the synthetic high-modular material used in bullet-proof vests costs about $200, and one shot from any weapon in the Russian center of tests of individual protection equipment at Scientific Research Institute Stali with measurement of speed and registration on technical plasticine - 500 rub.

By request of one of knitting factories on the supercomputer modeling of deformation changes of knitted cloths on a figure of the person was also carried out to SUSU. Obtaining characteristics for creation of the new knitted fabrics corresponding on quality to world level was the purpose of this work. Computing powers of the university were used also by investment company for calculations for optimization of a securities portfolio.

2017: Creation of laboratory of additive technologies

Together with university the German company will take part in creation of laboratory of additive technologies "Mechanics, laser processes and digital productive technologies". It will be headed by Marina Samodurova, professor of National engineering school of Saint-Etienne (ENISE, France), the employee of SUSU. 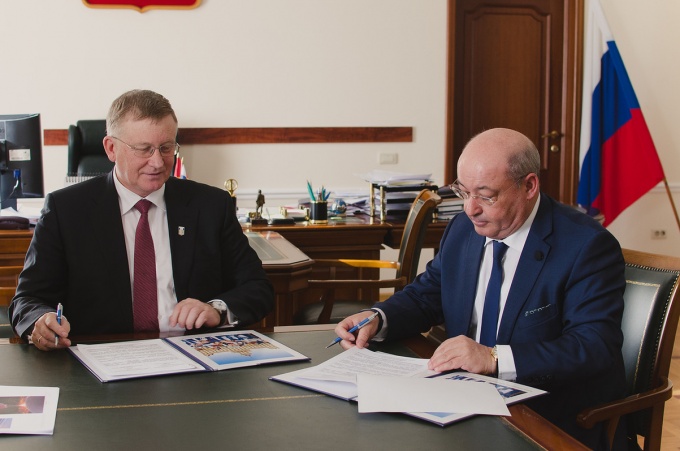 Action with participation of SUSU, (2017)

Research associates, graduate students and university graduates who have sufficient experience in this sphere will become the staff of laboratory. At the first stage the place for placement of laboratory is selected (on SUSU platform from the laboratory body) and the list of the necessary equipment is made. 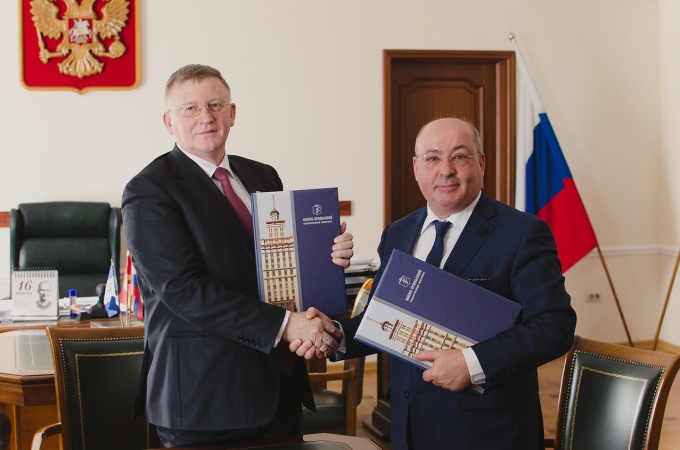 Action with participation of SUSU, (2017)

It is founded in 1943 as the Chelyabinsk mechanical engineering institute.

In 1951 the university was transformed to the Chelyabinsk polytechnical institute.

In 1990 it is transformed to the Chelyabinsk state technical university.