SUP Media (till 2011 SUP) is the Russian Internet company. In 2013 the company was a part of the Rambler-Afisha-SUP group
Owners:
Rambler&Co

SUP Media takes the place among producers of news, analytical and sports information and also services the most popular blog service on the Russian Internet of LiveJournal.com and covers more than 50% of the Russian Internet users (according to TNS Gallup, April, 2011).

SUP Advertising wages advertizing campaigns and covers the network of platforms more than 70% of the Russian audience of Internet users.

2013: Consolidation with Rambler, Mamut is the head of the new company

On March 28, 2013 it became known that the Rambler-Afisha company, integrates with the SUP media company belonging to Alexander Mamut.

Alexander Mamut will become the managing shareholder and the chairman of the board of directors of the united company. Financial details of the transaction are not disclosed.

By management estimates, the audience of the new company will make more than 35 million unique users. On this indicator it will become the third in a Russian-speaking segment of the Internet.

"Consolidation will lead to creation of the new company - the third largest audience in a Russian-speaking segment of the Internet. The company will become one of the leading providers of online services and the main source of information on social and political, business, cultural and sports events in Runet – both on screens of computers, and on smartphones, both in text, and in video a format" — Alexander Mamut said.

Vladimir Potanin, in turn, noted: "It is a unique combination of the leading Russian online brands in promptly growing Internet market. All will benefit from consolidation: shareholders, users, partners and in general hi-tech business in Russia".

On November 16, 2011 the Sup Media company announced departure of the CEO of LiveJournal Russia service ("LiveJournal") Svetlana Ivannikova who held this position in 2010. Ivannikova's desire to be engaged in own business is called the reason. Its place was taken by Ilya Dronov who since 2008 is the development director of the products Sup Media.

The nose assures that outflow of users from LJ does not happen, and there is deceleration of growth rates. "Attendance of LJ has seasonal nature, at the same time, according to TNS-Gallup, in 2011 in every month attendance was higher, than for the same periods of last years, - he says. - The exception was made by only an August when the number of the Russian audience — 11 million — was equal to last year's".

At the same time the new media director of Sup recognizes that in Livejournal there are things requiring change.

"Ilya Dronov has corresponding ideas with which implementation I will help him", - reported the Nose of CNews[2].

Ivannikova's leaving, most likely, is connected with discontent with results of activity of LiveJournal, the head of Liveinternet service German Klimenko considers.

"The Internet company — not steel works, and management it should not trust people who as in a case from Ivannikova, are good managers, but do not understand technologies, - he considers. - The nose of these shortcomings is deprived, however all the same will not envy it: blogging platforms reached the limit and hardly Livejournal to turn into the second Facebook".

One of the former top managers of Sup it is pessimistic looks at the future of LiveJournal:

"It seems that there is no understanding of what to do with this service neither in Sup, nor beyond its limits, - the interlocutor of CNews says. - Respectively to solve a problem some staff movements it will not turn out. Besides the audience of LJ began to be negative to administration of service just at the Nose, and Dronov, to some extent, bears responsibility for the last technology failures in Livejournal".

In 2011 Alexander Mamut and Alisher Usmanov's structures own approximately equal shares in SUP, the small packet belongs to management, the CEO of Kommersant Publishing House Demyan Kudryavtsev told. According to him, investments into SUP Fabrik of each of partners within four years made "tens of millions of dollars"[2].

On August 31, 2011 it became known that Alisher Usmanov and Alexander Mamut conduct negotiations on sale of a part of the share in SUP company - the owner of a popular blogoservice of LiveJournal (ZhZh), Championat.com and Gazeta.ru. As Kommersant knew, the American Internet giant Yahoo! became interested in this offer, in particular

Told about desire of owners of SUPA to sell a part of the child to the edition several sources at once. The source in A. Usmanov's environment explained that the company is interested in strategic partnership with the strong foreign player who "will bring in the company not only money, but also synergy, and technology examination".

As possible option of entry into the capital of SUP of the third shareholder there could be an additional issue, specifies a source. At the same time cumulative control should remain with the Russian shareholders.

One of interlocutors of the newspaper claims that Yahoo! which tries to enter the Russian market for a long time was interested in a share in SUP. Other source confirmed that negotiations with the American Internet giant were really conducted since spring, but now are suspended. The parties do not confirm officially information on negotiations.

2009: Sharp sales growth in the I quarter

In the I quarter 2009 of Sup signed three times more contracts for advertizing, than the previous year, her CEO Anneli van den Belt told Vedomosti. She does not open advertizing sale revenues, but says: for 2009 Sup share in the Russian market of media advertizing (banners, etc.) in rubles should double up to 10%.

Sup estimates sales of media advertizing in Runet in 2008 at $250-300 million, and +Sol share (its "daughter" trading in advertizing) — at 5%. These are $12.5-15 million. Advertizing provides about 70% of revenue of Sup; another 30% are paid services, e-commerce (for example, sale of tickets), etc., the director of corporate development of the company Benjamin Vegg-Prosser adds. For example, about 100,000 subscribers of LJ use paid accounts (cost $20-25 a year), which give them access to additional services.

Increase in number of contracts in the I quarter 2009 van den Belt explains with implementation of the technologies increasing advertizing efficiency and increase in quantity of the websites which Sup offers advertisers (all their about 50). Last year Kommersant became the co-owner of Sup, and now +Sol sells advertizing on its website. Besides, were added Gismeteo.ru and Indarnb.ru to the list of partners of +Sol, Vegg-Prosser says.

In the I quarter 2009 of Kommersant Publishing House signed the agreement with +Sol on sale of advertizing on the website, but it works not since the beginning of year, the commercial director of ID Pavel Filenkov told Vedomosti. According to him, the size of an agency fee +Sol is not so big significantly to influence revenues of Sup.

If the economic situation does not worsen, then at the end of 2009 sales of media advertizing will be reduced no more than by 5%, the marketing director of Mindshare Interaction Yulia Udovenko considers. Advertizing sales of Sup grow thanks to not so much Kommersant, how many focus on niche Internet audiences, she believes. +Sol began to sell advertizing on the websites of business publications, a number of foreign resources (for example, MSN, Yahoo!, BBC, The Times), she reminds. But the main generator of advertizing revenues Sup — LJ, sure Udovenko: blogs are popular with a great number of advertisers.

2008: Mamut gave a half of SUP for transition of Gazeta.ru to this company

In 2008 the owner of Sup Alexander Mamut transferred a half of the stocks to the Kommersant publishing house belonging to Alisher Usmanov instead of what Sup received popular online edition "Gazeta.ru".

Later the LiveJournal service faced a number of difficulties. Actions of administration of Sup periodically caused discontent of LJ users (for example, canceling of the "basic" accounts which are not containing advertizing in 2008 or installation of forced creeping line in 2010), service repeatedly became unavailable because of DDoS attacks. The growing popularity of service of the Twitter microblogs and social network Facebook which enticed a considerable part of users became the main problem for Livejournal.

2007: SUP acquires the rights to all service LiveJournal

In 2007 Sup purchased all Livejournal.

2006: Mamut and Paulson create SUP Ltd for management of the Cyrillic LiveJournal segment

In 2006 the president of ID Poster Andrew Paulson suggested Alexander Mamut to redeem from Six Apart company of the right to service of the Cyrillic segment of a popular American blogging platform of LiveJournal together.

The Sup company was created in 2006 by Mamut and Paulson, having acquired the right of management of the Cyrillic LiveJournal segment. By SUP Ltd it is registered on August 25, 2006.

In 2006 Anton Nosik headed service of blogs of Sup company.

2001: Anton Nosik - one of the first top bloggers of LJ in Russia

In 2001 Anton Nosik became one of the first popular Russian-speaking bloggers and put a lot of effort for promotion of LiveJournal service in Russia.

Office of the company

The premises of office of the company are located on the top of the Smolensk passage, under a glass dome. The office represents uniform space in two levels, there are no doors. 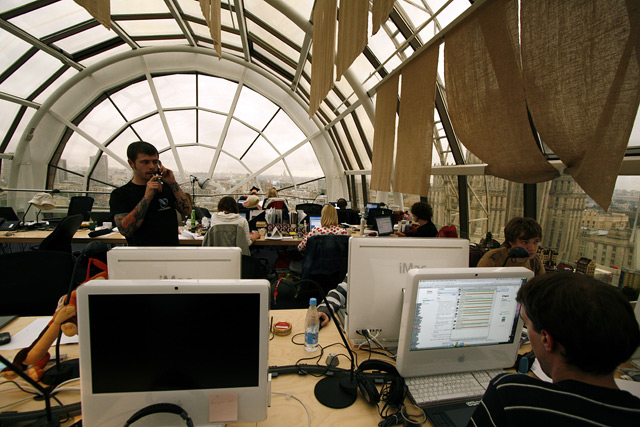 Office of SUP company in Moscow

Even the meeting room is a part of the uniform premises. Whether unclear only heavy to designers to work in sunny days. However at windows special protective curtains are provided and for the sake of such view from the window it is possible and to undergo. 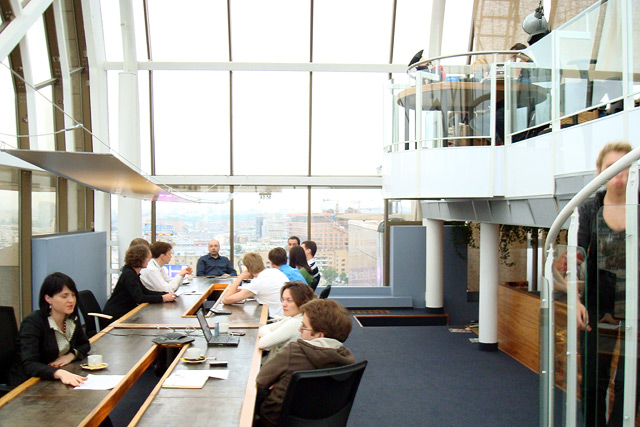 Negotiation at office of SUP company