"Magnet" - the retailer, largest in Russia, on number of shops.

For the end of December, 2018 the company had 16.35 thousand grocery stores in the Magnet format "at the house", Family and "Family +" and also nonfood Magnet of Kosmetik. 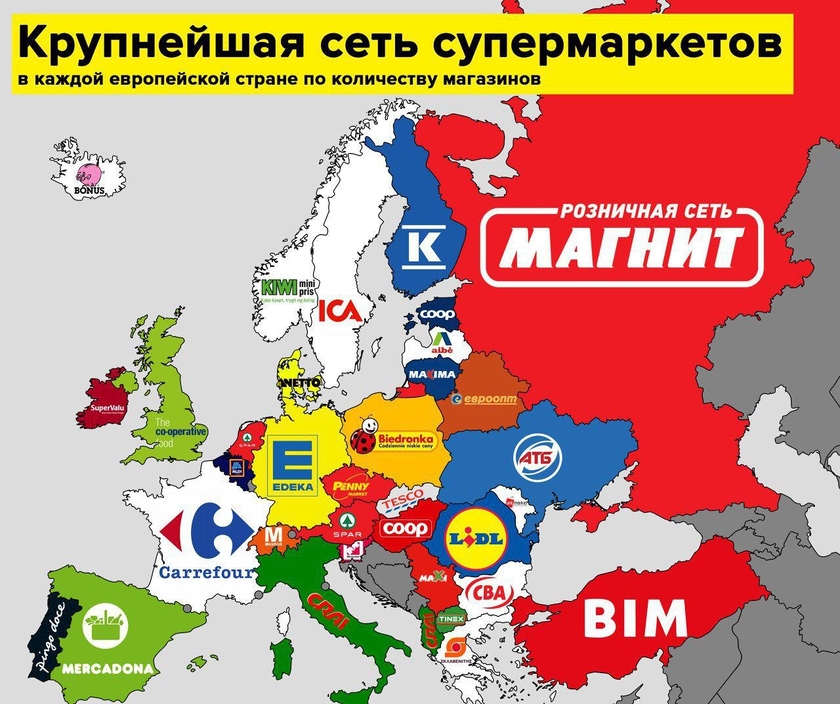 In the company the distributor network including 38 distribution centers and 35 motor transportation enterprises is created. In all shops of retail network own vehicle fleet which has about 5.776 thousand cars allows to perform the product delivery.

Besides, Magnet is one of the largest private employers in Russia. Total number of staff of the company is about 300 thousand people. 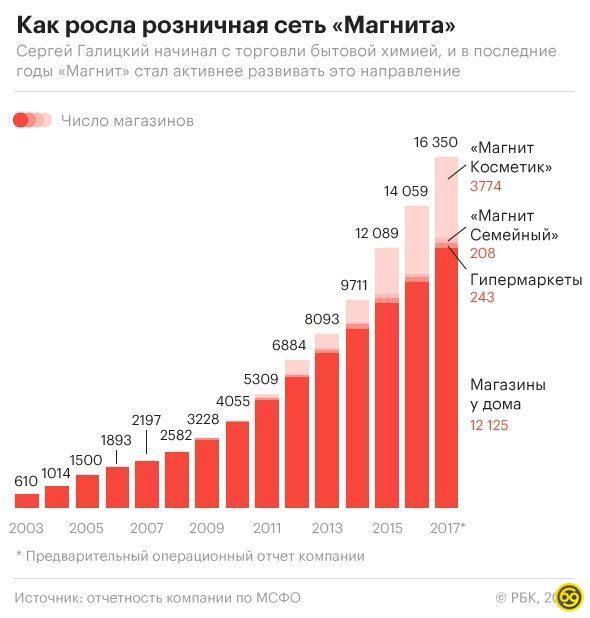 About two thirds of shops of the Company work in the cities with the population less than 500,000 people. Most shops of Group is located in the Southern, North Caucasian, Central and Volga Federal districts. Shops of Magnit network also are in Northwest, Ural and Siberian Federal districts.

The company manages own logistics system numbering as of December 31, 2019 38 distribution centers, the automated control system for stocks and vehicle fleet consisting of 5,656 cars.

According to unaudited data of the management reporting of the Company on IFRS, its revenue for 2019 made 1.369 billion rubles, EBITDA – 83 billion rubles.

On revenue the company conceded leadership to the closest competitor Retail Group X5 at the end of 2016, for 2017 the gap between them increased.

2020: "Magnet" and Tape put a marking in shops for protection against a coronavirus

On March 25, 2020 it became known that the Russian retailers began to put in shops a marking for observance of a distance between buyers.

As reported in Telegram channel of Magnet, the company began to equip the outlets with a special marking that buyers "could without thinking to follow rules of protection against a virus". The same innovation concerned shops of Toy Store and Tape — there divided the territory before cash desks into zones. 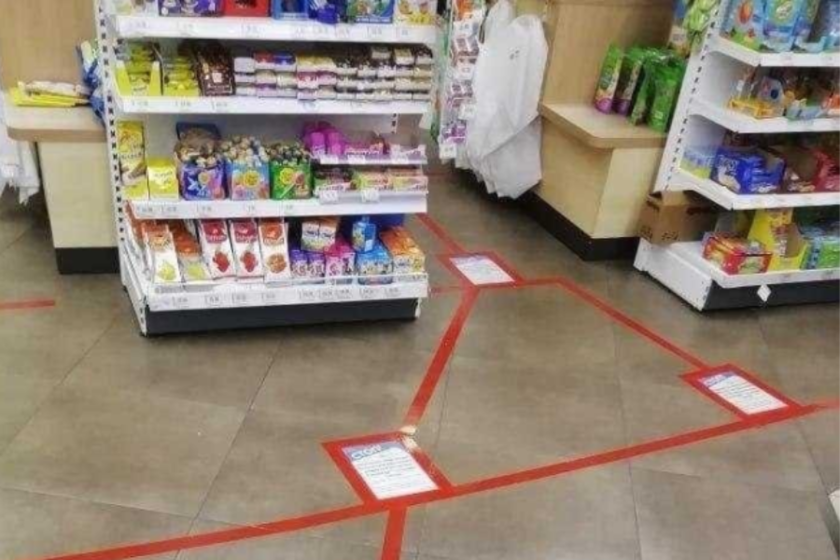 The World Health Organization (WHO) recommends to people to observe among themselves a distance not less than 1.5 meters to try to secure itself against infection with a coronavirus of new type. Shops began to undertake measures worldwide to help clients to keep from each other at the recommended distance.

For example, in France in the fruit and vegetable market applies a marking using a paint barrel directly on asphalt. And in China, in addition to the markets and shops, added still a marking in elevators: the number of passengers should be limited, and all should stand facing a wall.

In Russia the marking on a floor specifying the recommended distance for standing in a queue at the checkout, was also noticed in shop of the Krasnoyarsk network "Komandor". In IKEA hypermarket in Novosibirsk there were declarations urging buyers to observe a distance and also public coffee devices are switched-off.

Specialists listed several recommendations which allow to minimize risk to catch a coronavirus in shops:

Start of a uniform krossformatny brand for family of shops

On February 21, 2019 Magnit reported that to the 25 anniversary the retail network provided the updated architecture of a brand. At the heart of the development strategy of network — creation of family of Magnit shops for buyers. For February, 2019, daily the company services more than 10 million people and is going to increase in five years the share in a consumer basket to 70%. For this purpose the network develops different formats of shops — both food, and other retail articles. Now outlets "at houses", supermarkets, droger, drugstores and others will be issued in the general style and integrated by the slogan "Let's Be on Friendly Terms Families!".

Objects under a uniform brand will open since March, 2019 on all geography of network. The general design — the first stage of creation of family of Magnit shops. Further all formats will be connected not only by design, but also the loyalty program. For February 21, 2019 at retail network six formats thanks to which inhabitants of different regions of the country purchase goods with benefit and comfort:

Now all of them will work under an umbrella brand. The logo saved recognizable color and the logo — letter "M" — and at the same time received a modern form. It beats the gesture of hands realizing care and attention. On facades, signs in trading floors, packaging products of STM, information and promotional materials the original system of icons will be used. She reminds icons in the smartphone and answers didzhitalization trends which cover all spheres of life of buyers.

The creative agency MORE (BBDO Group) and branding agency of Suprematik acted as partners in development of a krossformatny brand.

On April 2, 2018 Elena Milinova is appointed the chief financial officer of Magnet. Milinova is responsible for all complex of the questions connected with financial activities of the company and also for formation and implementation of new financial strategy of Magnet, reported in the retailer.

In February, 2018 it was announced that the share block of Magnit network in 29.1% is sold to VTB for 138 billion rubles. The founder of network Sergey Galitsky remained the minority shareholder of Magnit, having reserved 3% (for the beginning of the 2018th personally it had 34.26% of the company).

Since February 17, 2018 Khachatur Pombukhchan is appointed the CEO of the company

The net profit of network decreased on a third and was 35.53 billion against 54.41 billion rubles the previous year. At the end of 2017 Magnet for the first time conceded to the main competitor X5 Retail Group (Pyaterochka, Intersection, Roundabout, etc. manages brands) on total revenue: 1.14 trillion against 1.28 trillion rub respectively.

As of the beginning of July, 2012 the Magnit network integrated more than 5.7 thousand shops[2].

According to the CEO of the company Sergey Galitsky, against the background of strong financial results in Magnet raised the forecast for a margin of EBITDA (profit to payment of taxes, percent on the credits and write-offs on depreciation) in 2012 from earlier being expected 7.8-8 percent to 8.5-9 percent. Capital costs of network in 2012 can also increase - about the planned 1.4 billion dollars up to 1.8-2 billion.

For June, 2011 the Magnet network included 64 branches, 1 representation, more than 4,128 shops of a format "at the house", 57 hypermarkets and 4 drogeri shops in more than 1,239 cities and localities. Tander Ltd opens on several tens of shops monthly.