PJSC Tupolev is a part of United Aircraft Corporation (PJSC OAK) and represents the company in which key components for creation of the modern and perspective aircraft equipment – design offices in Moscow, Ulyanovsk, Samara and Kazan, production capacities of the Kazan aircraft factory of S.P. Gorbunov both unique Zhukovsky flight-test and honing base are concentrated.

The enterprise carries out works on release and I service special purpose airplanes based on the Tu-204/214 airplanes among which Tu-214OH ("The open sky"), Tu-214PU (operations control room), Tu-214SUS (the aircraft communication hub), Tu-214CP (airplane repeater), is engaged in production and delivery of nodes and units of airplanes in cooperation with other enterprises of PJSC OAK.

PJSC Tupolev executes service and upgrade of airplanes of strategic distant aircraft of Tu-160, Tu-22MZ and Tu-95MC. Retrofitting of the enterprise is conducted, the new equipment of domestic production for the purpose of resuming of production of the upgraded strategic Tu-160 bomber rocket carrier is purchased.

Works on creation of new perspective aviation complex of distant aircraft are in parallel conducted (a HSS YES) which will come to replacement with existing, having provided efficiency of strategic aviation grouping in general.

At the enterprise large-scale information technology implementation, new technology processes and materials, composition materials is performed, airplanes of the increased comfort with VIP-interiors are created, used the best world experience for creation of competitive projects.

The company aims at preserving and development of research and production potential of an aircraft manufacturing complex of the Russian Federation, security and defense capability of the state, concentration of intellectual, production and financial resources for implementation of perspective programs of creation aviation the technician

2017: 95 years from the date of foundation of experimental design bureau of A.N. Tupolev

Ninety five years were performed on October 22, 2017 to one of the largest domestic developers of the aircraft equipment of PJSC Tupolev. The enterprise is a successor of traditions of the design office founded on October 22, 1922 by the outstanding aircraft designer and the organizer of domestic aviation production of the XX century Andrey Nikolaevich Tupolev.

For years of existence about 300 projects of aircraft of different function, the snowmobile and small courts from which about 90 were implemented in the constructions passing tests were developed, and more than 40 were under construction serially, having in many respects defined the person of our military and civil aviation in the XX century. For last century more than 18000 airplanes with the Tu brand rose into the sky, from them about 2000 – passenger airplanes. About 1000 tupolevsky cars were parked abroad where they were in operation almost in twenty countries of the world. In Czechoslovakia and China airplanes with the Tu brand were under construction on a license basis.

Under the direction of and with active participation of chief designers A.N. Tupolev, A.A. Tupolev and their successors the staff of CB created the whole galaxy of high quality samples of the aircraft equipment. It, first of all heavy all-metal multiple-motor monoplanes of the 20-30th years of ANT-4 (TB-1), ANT-6 (TB-3), ANT-20 Maxim Gorky, the record ANT-25 airplane, the high-speed bomber of the thirtieth years of ANT-40 (SATURDAY), one of the best front bombers of World War II Tu-2, world-wide recognized masterpiece of post-war bombing reactive distant aircraft of Tu-16, the first domestic reactive passenger Tu-104 airplane, family of the distant supersonic Tu-22 bombers, and then and multimode Tu-22M, family of the strategic Tu-95 bombers, family of the passenger trunk Tu-124, Tu-134 and Tu-154 airplanes which were widely adopted both at us and behind boundaries of our Homeland, the country's first and one of first-ever long-haul passenger Tu-114, the first-ever supersonic passenger Tu-144 airplane, the supersonic strategic Tu-160 bomber rocket carrier, family of the modern trunk passenger Tu-204/214 airplanes. Here that incomplete list of works and activities of the enterprise which provided its leading position for last decades in domestic and world aircraft.

At the beginning of 2015 OAK opens the new center of design based on CB Tupoleva in Moscow. The center of design will be among the largest in the domestic industry the president of OAK Yury Slyusar said. The new center of paperless design is equipped one of the most powerful supercomputers in Russia with a computing capacity – several tens teraflop. Its use will allow to accelerate significantly implementation of large projects in the field of aircraft industry. Special allocate circuits allow to exchange data between the OAK branches located through the whole country and also to work with the largest domestic companies designers. The general amount of investments into the project was 500 million rubles.

Designers of United Aircraft Corporation work approximately on three tens projects of creation new and upgrades of working models of airplanes. In 2016 the first flight of the new civil MS-21 liner will take place, design of the transport worker Il-112 is conducted, work on the joint Russian-Chinese widebody passenger airplane, the project of a HSS YES begins. The latest technologies will allow to solve problems of design and also training of operation of difficult nodes and units in the 3D format.

For accomplishment of plans of JSC Tupolev, entering into OAK, is going to take in addition more than 1000 people in the nearest future – in Moscow and in branches, first of all, in Kazan. 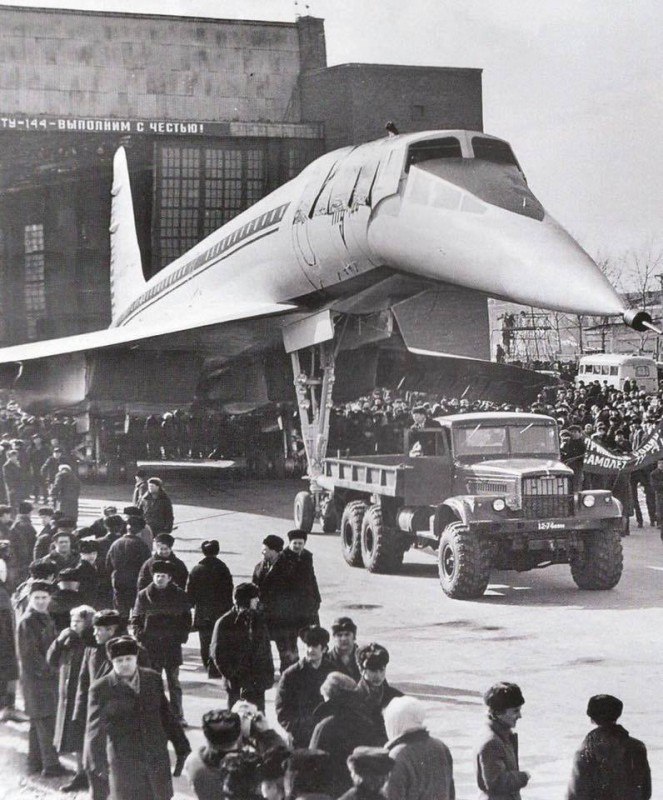 The first demonstration flight to New York was executed by the Tu-114 airplane (the board number of the USSR-L5611) in the summer of 1959: the airplane landed at the Aydeluayld airport (later it is called by the name of John Kennedy) and brought government delegation headed by the vice-chairman of Council of Ministers of the USSR on "An exhibition of achievements of the Soviet science, the equipment and culture" which opened in New York. The airplane itself became an exhibit at the airport.

In September of the same year one more flight was performed from Moscow across the ocean — in the USA the delegation of the USSR led by N.S. Khrushchev arrived. 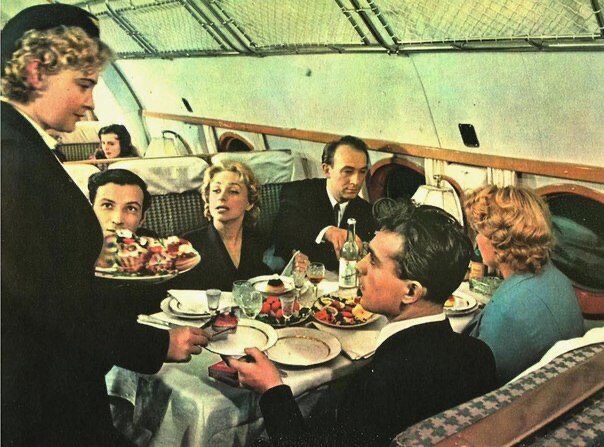 Service onboard the passenger Russia Tu-114 airplane - the biggest at that time the passenger liner in the world. the 1960th.
Источник — «http://tadviser.com/index.php/Company:Tupolev_of_public_joint_stock_company»